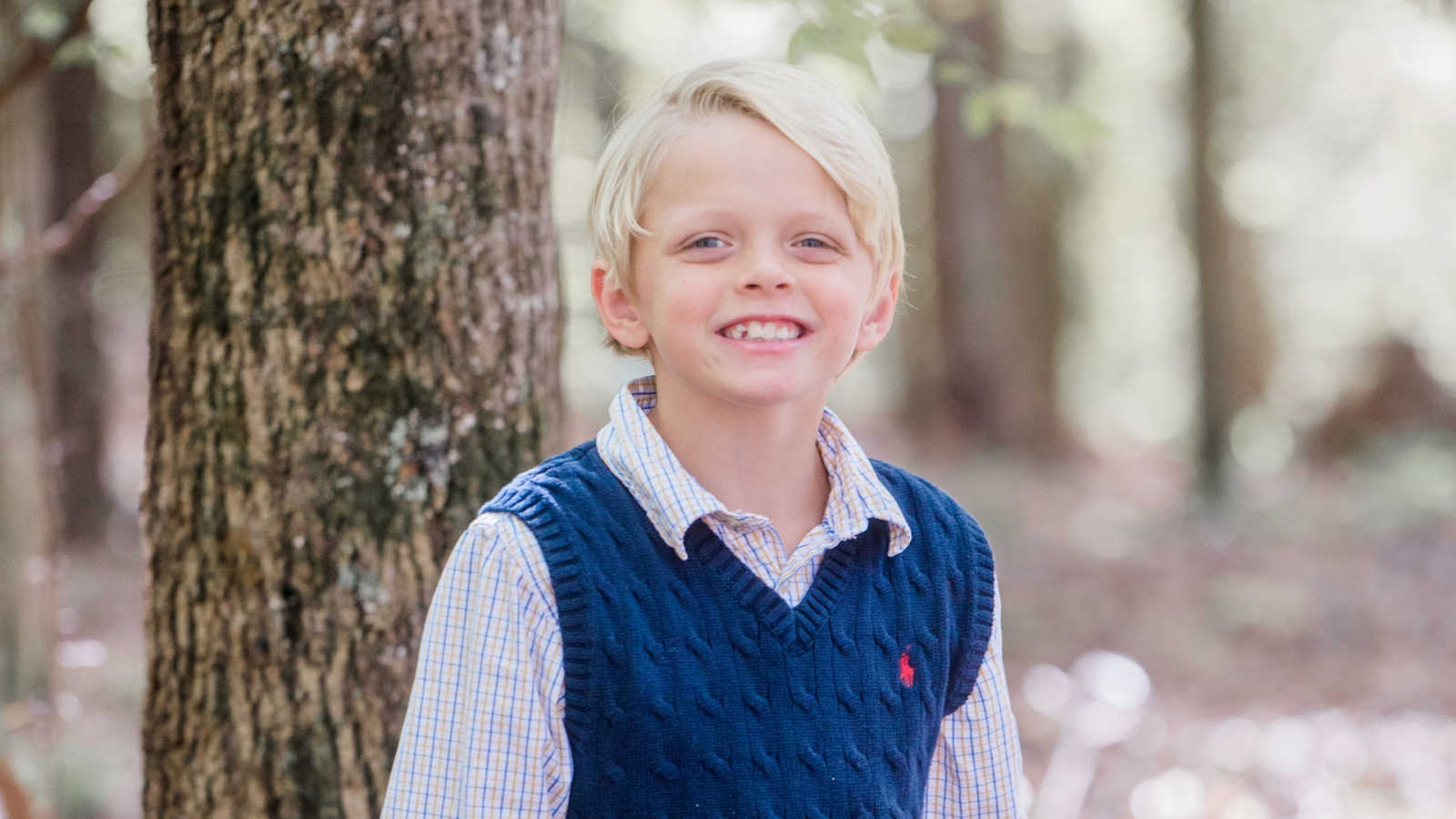 “When I first brought my new baby home, I had big dreams and plans for him. I would stay up late rocking him and imagining the young man he would become. Perhaps, a doctor/president who has all the charm and charisma of a Bachelor contestant, but without any of the loose morals.

I remember thinking how smart and accomplished my child would be. He would be a straight ‘A’ student, an all-star athlete, and a musical prodigy. No need to start saving for college, because he would have a full scholarship to any school he wanted.

This child has a mother who is committed to making sure he gets it all right, and who refuses to let him fail. With my map to success, there is no way he could fail.

This month my son has made an ‘F’ on an assignment, lost behavior points for talking in class, gotten grounded for hiding in the bushes during recess, and most recently he climbed the bathroom stall resulting in a bloody leg and an unplanned trip to the ER for an industrial strength bandage. Oh, he also did a week’s worth of homework and forgot to turn it in, because ‘he was busy.’

These roadblocks were not a part of my plan. If he can’t be successful in second grade, how will he ever hold it together in the real world? These are the things that keep me up at night.

It is a scary notion that no matter how much we want our kids to do well, they may not. We can set them up for success, but sometimes they will still fail. We can work with them and lead them and guide them, but in the end,  they are going to do what they want.

Days and weeks and months and years of showing them the right thing, consistently disciplining and praying desperate prayers for them, will it be enough? Is there anything I could do differently? All I can give is everything, and right now I am giving what feels like more than that.

Last night, I laid with my son before bed. Like many nights before, I spent the evening lecturing him. Encouraging him to slow down to do his school work. Think before he acts. Just do the right thing. I gave him the best pep talk I could come up with, a call to action, a plea to make tomorrow better than today.

I looked in his eyes that dodged contact with mine, and noticed tears had started to run down his cheek. This was a look of defeat I had never seen from him. ‘Okay mom…I’m sorry that I am bad.’

The same precious baby that I rocked and dreamed big dreams, has already labeled himself as bad. Inadequate. And if I’m being honest, maybe I had too.

The same boy I pray for, and plan for and love so much it hurts, has accepted he is bad.

At age 8, he is owning the idea that he is losing the battle of being ‘good.’ How long do we have before he stops trying? What will that look like in 5 years? In 10 years?

The thought of having a teenager that has given up on doing the right thing is just too much for this mama’s mind.

I am not sure how a person who messes up so often can demand perfection, but somehow, I still do. I can be too tough. Too harsh. It is easy for me to get consumed in what is going wrong that I forget all that has gone right.

My son is such a good kid. I am amazed at the person he is. I want to grab his little chin and make him look in my eyes. I want to force him to understand how much I adore him. He makes me proud every single day. I hate that I haven’t made that clear to him.

He is so giving, that he has donated all his money to his sibling when he didn’t have quite enough to buy the skateboard they had been saving for.

He is so brave, that he has stepped up to an older (and much larger) boy who was being mean to his brother, and told them this is not how we treat people. ‘Be kind or get off the playground!’

He is so smart. He can tell you all the animal facts you never wanted to know. He knows the detailed diet of the African buffalo and the mating pattern of honeybees. It’s disgusting and amazing all at once.

He is an encourager. He is hilarious. He is genuine. He loves harder than any child I have met.

Why have I been so focused on the bad things that I have let him forget all the good things he is?

What if all those good things took up such a large chunk of his self-worth, that there was no room for the ‘bad’ things?  What if he were so convinced that he was amazing, that he took it upon himself to work on the things he struggles with?

I have tried to make him fit into a box that he was never made to fit into. He has so much to say, that sometimes he just can’t stay quiet. He can only do a certain amount school work and walking in a straight line before he runs down the hall pretending to be an airplane. He isn’t a machine. He is a curious, adventure-seeking little boy.

Sure, he has to learn to follow the rules. He has to learn the discipline of doing things he doesn’t want to do. This is important. But, maybe it’s ok that he doesn’t have it all down in the 2nd grade. God made him to question things, to explore, and to be a child for a season. I am not going to rob him of that.

This story was submitted to Love What Matters by Stephanie Hollifield of Momstrosity. It originally appeared on their blog. Submit your own story here, and subscribe to our best stories in our free newsletter here.

‘I vividly remember the crazy looks I got with my huge pregnant belly and a newborn baby draped across my chest. I would stare too. It’s an odd sight, and honestly something I never imagined for myself.’

‘A stranger helped me with my black daughter’s hair. I desperately want to do the right thing. Our world needs more people like this.’