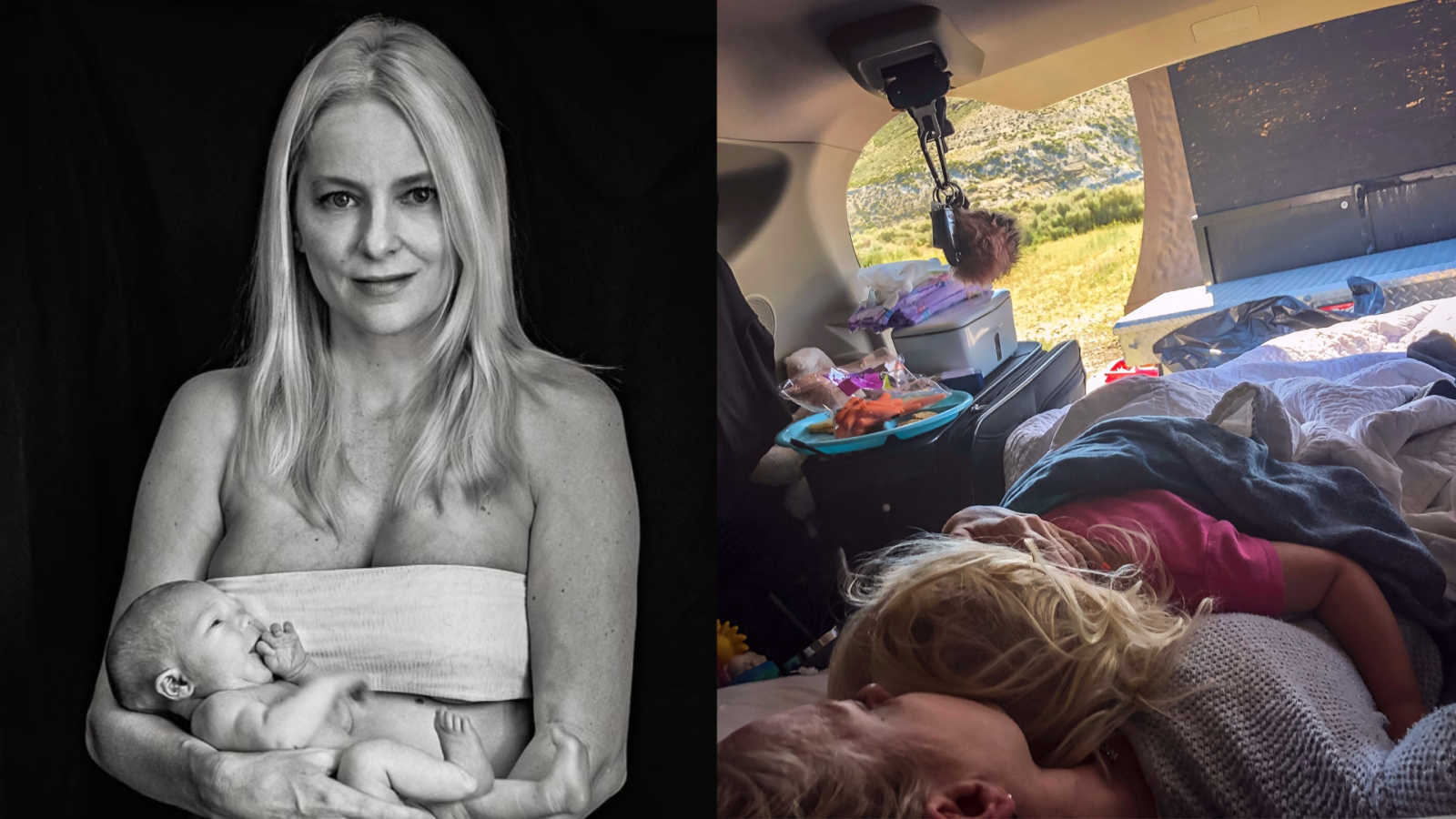 “One year ago today, I took the first steps in taking my own life back after years of multiple violent relationships. I packed up my personal belongings, my two-year-old toddler, and began a 10-month-journey of moving in and out of countless safe homes provided by friends, family, house and pet sitting opportunities, and ultimately living out of my car while driving across the country to begin a new abuse-free chapter in my life as a single mom.

Looking at me through the lens of social media, you probably see a bright, cheerful, and beautiful woman in her mid-40’s who is career-driven and successful with a happy facade of life. You’d never guess that in the last nine years I’ve experienced being choked, held down and smothered, and grabbed and thrown against walls. I’ve been controlled by threats of killing my friends if I ever spoke to them, threatened with CPS charges if I didn’t give back car keys to a drunk driver, experienced the manipulative threats of suicide, and have been blocked from going to my daughter and escaping physical attacks. I’ve been raped by one boyfriend. I’ve had holes punched in a locked door trying to get into my room by another. And I have been forcefully trapped in my own car resulting in my hair being pulled out and face smashed into the dashboard by yet another man who had proposed to me just four short hours before that moment. I’ve worn specific clothing to cover up bruises that were the full length of my arms. I know exactly what color palette to use and how to expertly apply specific makeup to cover-up two black eyes and avoid questions from family, friends, and doctors.

During this cycle, I never once identified myself as a victim of domestic violence as the abuse never escalated to me ending up in a hospital and/or being photographed by the police as evidence for assault charges on my abusers. No, I was just in a relationship where we needed to work on our communication issues, or I needed not to be so demanding of their time, or perhaps I shouldn’t have moved furniture while he was on away for business. Maybe I should be more careful while cooking and make sure the stove isn’t turned on passed the second-to-last-line as he told me, or maybe I shouldn’t nag him for starting to drink at 8:00 am and chugging two more beers before our couple’s therapy session. And I really have no right to question where he was all night or why he disappeared all weekend, why he has tinder on his phone, where the dildo in his glove box came from, or what women keep texting him from my bed in the middle of the night.

The relationships never started out like this. Never. They always began with a man completely smitten with me, presumably gentle, always the knight in shining armor type. Abuse starts with love-bombing which ‘is the practice of showering a person with excessive affection and attention in order to gain control or significantly influence their behavior. The love bomber’s attention might feel good, but the motive is all about manipulation. What separates love bombing from just regular honeymoon feelings is an abrupt switch—one moment they may be totally idealizing their partner, and the next, they’ll cut them down to size in an effort to control them’ [Cosmopolitan March 29, 2019]. Like a clueless, cozy frog in a pot of water, as soon as that honeymoon was over, I was always left with my mind spinning from being talked to in circles, gaslighted, and verbally, emotionally, and mentally beaten down. I would just give up and succumb to being boiled in an open fire pit believing it was all my fault. Again.

Within 10 months of meeting my last abuser, we eloped and the next morning he immediately took control of my entire physical world, including my daughter and her safety. At this time he had already beaten me up, and I continually cowered from his gorilla clenched-fists and chest-puffing bullying tactics. The abuse began taking on a verbal and mental turn for small disagreements, and I’d be screamed at and called horrible names in front of my child. He started calling her names and would look me in the eyes laughing, knowing I was powerless against him. He was in charge. He was in control. And I was physically, mentally, and emotionally trapped in the cycle of abuse yet again.

It is not surprising that breaking the pattern of domestic violence is difficult to do as it’s the only thing the victim knows. For me, I decided to make a change by opening up and confiding in a friend for support just after two weeks of marriage. During a walk on a blustery Seattle afternoon, I looked my friend in the eye and said, ‘I’ve got to break this cycle. I’ve got to change the future for myself and my daughter.’ We made a plan to move me out, and while he was at work, we did an emergency move-out in just 3 hours.

I packed what I needed to survive the Seattle winter in my car: a couple of bags of canned and dried food, coats and scarves, essential clothes for both of us in one small suitcase, one bin of toys for my daughter, and one bin full of work for my remote job. Everything else we stuffed into a small, leaky storage unit that I could afford. Exhausted, I got on the freeway and drove the two-hour commute to the city and the empty house of my friend who was away on business. On auto-pilot, I emptied the car with a crying two-year-old, got us quickly settled, and ordered Thai food. After the first bite of hot food hit my stomach, I felt the giant weight of escaping my abuser lift off my entire, weak body. I also felt the heaviness of guilt, shame, and overwhelming sadness. My throat got tight from keeping the tears back so I gave up and started crying. My little girl, blessed with an empathetic heart, just looked at me and hugged me saying, ‘Mama, it’s ok.’ I felt like a complete failure as a woman and as a mother.

A month later, I was laid off from my job. I felt utterly broken and lost so I made a choice to do something about it. For the next few months, I worked very hard with my therapist in an intensive counseling process which allowed me to work through each stage of grief from all three of my past domestic violence relationships. It turned out that my pattern of abuse began in early childhood from witnessing an unhealthy pattern in my own home growing up. True healing required me to sit with, embrace, accept, and finally love every aspect of my past hurts. They are a part of me, but no longer define me or control me.

When I felt my own inner strength begin to return, a warm bright light began flickering in my spirit once again. I realized I needed to make a choice to begin living wholeheartedly again by taking action towards a future life where we could thrive and be happy. Planning a cross-country move, I left no stone unturned as I packed up our belongings into a cargo trailer and planned out every possible scenario of car camping with a toddler from Seattle to the Florida Keys. As I drove away from the Pacific Northwest, I felt a sense of self-empowerment, confidence, and security within myself that I’ve never experienced. Over the next four weeks, those feelings grew stronger in me as I drove through the United States with my little girl, all while being an example of inner strength, resilience, and resourcefulness as we boondocked or stayed in state parks each night.

After 30 days of travel and another three months of staying with a friend, we began a fresh life in a peaceful small town showered in sunshine by the sea. Funny, as I unpack my life, I am still undoing more layers of past memories and facing them head-on. There are so many moments lately where I want to pack my car up and hit the road again just to avoid dealing with it! But I know it wouldn’t fix anything or take away the memories. So I’m sitting with and allowing the emotions to flow through me, as I gently accept them, love them as a part of me, and ultimately forgive myself for the past.

And that past becomes more distant each morning as my daughter tells me that ‘it’s a beautiful day’ and I’m filled with joy. We are blessed. Grace upon grace…”

This story was submitted to Love What Matters by LaRae Lobdell of  Olympia, Washington. You can follow her journey on Instagram. Do you have a similar experience? We’d like to hear your important journey. Submit your own story here. Be sure to subscribe to our free email newsletter for our best stories, and YouTube for our best videos.

‘Nobody else will ever love you.’ I tried to jump out at a stop sign. But I was stuck. This was my ‘destiny.’: Woman overcomes traumatic childhood, abusive relationship to find her ‘soulmate’