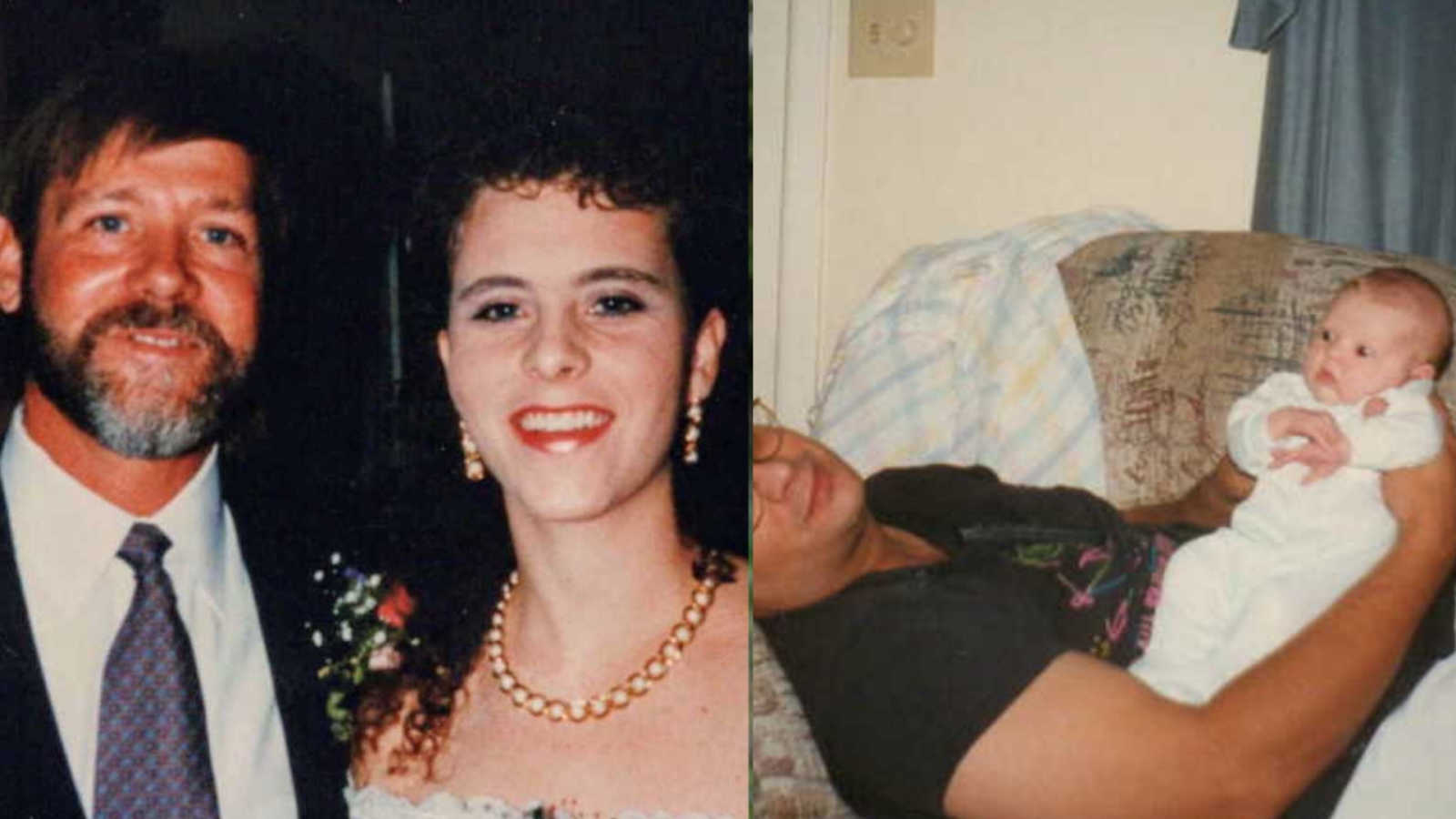 “A woman stood amongst the rubble, solemnly watching as the emergency crew prepared her husband for transport. An officer contorted his face with a hardened expression, delivering the unfortunate news. It was assumed he fell asleep behind the wheel. The predicted outcome was grim. Despite numerous miscarriages the young newlyweds were unknowingly parents the day of the accident that killed my biological father. The shattered glass compared to our family’s future—broken, with pieces missing, but with a slight glimmer of hope reflected in the kaleidoscope of ambulance lights and the morning sun. I was their miracle baby.

Five years later, rain doused my black funeral clothes. My mom held my hand in hysterics as we buried the only man I had ever called daddy, the man she married when I was a young child. I was too young to understand the situation but that did not cause his death to hurt any less. Part of me died with him on that bitter December afternoon. I was found cowering, fetal position, in the space between the washer and dryer. I couldn’t escape my own grief complicated by the fact I was face-to-face with death long before my birth.

New beginnings eventually transpired from the fear that everyone I loved would unexpectedly die. The scariest realization was that my worries were justified. I attended weekly therapy sessions to overcome my anxiety. As I healed from my emotional wounds my mom passed the hour conversing with the receptionist who, much to her reluctance, set her up on a blind date. Many unanswered phone calls later I had the start of a complete family.

I grew up with two parents and a brother. The four of us were happy, even content. I could finally rest in security…until I couldn’t. By my teenage years life presented a new obstacle. High school is generally painted as a picture depicting late study nights, an abundance of friends, and ceaseless fun during the four years that determine success. As an incoming freshman, my thoughts were no different, however, my fairytale daydreams regarding high school became the opposite of what I had envisioned.

I was diagnosed the summer before high school. Puberty had exacerbated unnoticed symptoms from childhood. My legs, once strong from years of softball, no longer supported my own weight. The number on the scale dwindled as each bite of food I put in my mouth provoked vomiting or severe allergic reactions, and my youthful vitality morphed into endless doctor appointments, feeding tubes, and vision that faded to stars upon standing—foreshadowing seizing fits of unconsciousness.

The guy in the white coat said I have Ehlers Danlos Syndrome (EDS) which is a connective tissue disorder impacting the body’s collagen production. EDS resulted in the malfunction of my autonomic nervous system. Processes that are supposed to occur automatically, like regulating heart rate and blood pressure, went awry and fainting was triggered by postural changes. Faulty collagen in my gastrointestinal tract suddenly prevented my stomach from properly digesting food. I had to have a feeding tube placed to bypass my stomach altogether. While the specialist continued with his medical jargon I sullenly looked around the room. My mom and step-dad attempted to comfort the girl with blonde hair and blue eyes similar to the father she never had the opportunity to meet. I spent 8 months in the hospital.

Growing up with a chronic illness was challenging. Regardless, treatment allowed me to manage some semblance of normalcy as an adult. I received a full scholarship to my dream school. Although I could not physically attend classes, I continued to pursue my college degree online, had remote internship opportunities, and got engaged. Normalcy is a precarious concept with illness, however. ‘You need emergency surgery’ is rarely a comforting statement but there I was, whisked away and hoisted onto an operating table because the paralysis of my stomach spread to the rest of my digestive tract. Chronic dilation from a bowel obstruction led to the twisting my colon, which required removal of multiple organs. Instead of planning our wedding, my fiancé was called to the ICU at 4AM just in case. Surgeons and nurses scrambled around my bedside after my blood pressure bottomed out from surgical complications.

I spent a great deal of time asking God why. Why did my dad die? Why am I sick when my parents struggled to have me? Why? Why? Why? But maybe we are not meant to have answers the very moment we demand them. His timing has a divine plan. The reasons for our why’s are revealed later, like when further genetic sequencing confirmed in addition to my symptoms from Ehlers Danlos Syndrome, I also have a hereditary cardiac condition. They tested my mother to see if she was positive for the mutation. She wasn’t. Left untreated, death by sudden cardiac arrest typically occurs in the third or fourth decade—the age my biological father was when he seemingly drove into oncoming traffic for no apparent reason.

Writing this I am not sure what my purpose is. At 22 years old I feel as if my entire existence has been one tragedy after another, and I would be lying if I said there were not days I question my faith. But isn’t life all about learning to take the good with the bad—appreciating the highs because we’ve experienced the lows? I might be the author, but this is not my story to share. Only He can guide my pen and I will go wherever His words take me.

Regardless of my health challenges I am in school to become a counselor with a speciality in chronic and terminal illness. I blog and vlog life with chronic illness at hospitalprincess.com to connect with teens and young adults struggling with life’s challenges. Knowing I can make others feel a little less alone in their situations brings me hope. The blog was inspired in 2015 when I spent 8 months out of the year inpatient at the hospital. It was originally just to fill my leisure time but has become so much more! I am also supposed to get married to my high school sweetheart in Nov. 2020, so I am knee-deep in wedding planning which gives me something to look forward to! God is good.”

This story was submitted to Love What Matters by Cheyanne Perry. You can follow her on Instagram. Do you have a similar experience? We’d like to hear your important journey. Submit your own story here, and subscribe to our best stories in our free newsletter here.

‘Before my father’s sudden death last year, I thought I understood what to expect about grief. But nothing, nothing could have prepared me for how different this unexpected loss would feel.’

‘Our world came to a screeching halt. The love of my life was no longer with us.’ Fallen soldier’s pregnant wife recalls ‘nightmare’ of his sudden death, being ‘strong’ through birth without him.’

‘Mommy, why are you crying?’ How do you explain to a 3-year-old her daddy has passed? I had just shattered her life forever.’: Widow shares grief journey, ‘We’ll make you proud every day’

“I opened the door to two police officers, our baby in my arms. They took off their hats and the world started spinning. It couldn’t be real.”

‘Michelle, we haven’t had sex in a year.’ My husband rolled over in bed with a blank look on his face.’: Couple stress importance of ‘boundaries’ in marriage, ‘You don’t owe your partner anything’

“My doctor’s cold hands pressed against my breasts. ‘No lumps, but let me process the urine sample.’ 5 minutes later, she retuned with a beaming look on her face. ‘You’re pregnant! Congrats!’ I’m…what? Who? How? ‘Infertile’ and on birth control, I was in utter disbelief! We went from a quiet little house in Suburbia to catapulted into parenthood. I had no energy or desire for intimacy. We hit the one-year mark completely sexless.”