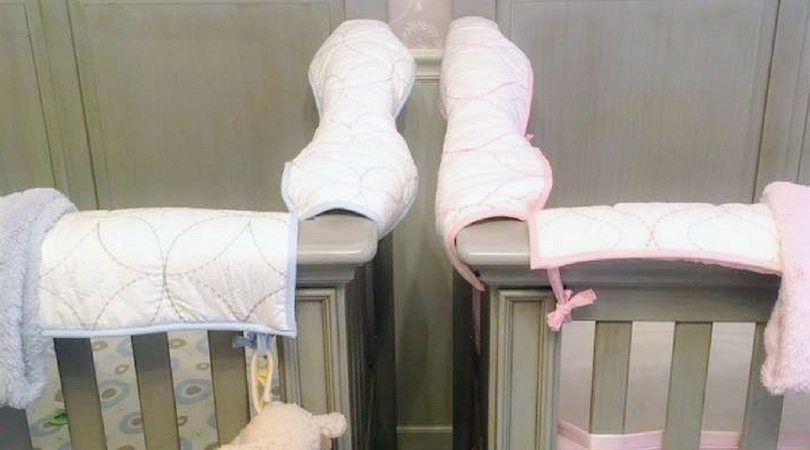 “I have a lot of friends that have twins or kids close in age that may have a similar set up, so I wanted to share something VERY scary that happened today. This morning I put Caleb down for his nap. Shortly after he started to cry. After a few minutes, I went in to check on him. He had climbed out of his crib and was stuck between his crib and Libby’s crib. His body fit through, but his head wouldn’t. He was using every ounce of energy he had to hold himself up by his little arms. If they had given out, he would’ve just been hanging there by his head.

What’s even more scary is that like many moms, I generally use nap time as an opportunity to shower. Had I done that today and checked on him after five minutes, he would have literally hung himself. When baby proofing, I never in a million years would have seen this as a potential danger. Please consider sharing this post in case someone you know may have a similar set up. It’s incredibly heartbreaking to think of what the outcome could have been today. I’m still totally shook up over it and don’t think the vision of him stuck there will ever leave my head.

If you search on Google or Pinterest, almost all the inspiration photos are set up the way we had it with no warning. Even when researching about baby proofing, nothing is mentioned about this. I literally received 100’s of messages from other twin moms thanking me because they had their nursery set up the same exact way and have since changed it. I feel 100% that by sharing our story we have saved a life, that’s all that really matters.”

This story was written by Alison Johnson. Submit your story here, and subscribe to our best love stories here.

‘The ambulance will be here soon. Want me to go with you?’ He was a stranger, all alone, with a bloody gash above his eyes.’: Woman finds man of her dreams in ‘random chance meeting’

“The EMT arrived. ‘You don’t know him, do you?’ I felt totally called out! ‘Well, he’s cute. Maybe you’ll get his number.’ As we chatted, his deep dimples began to show. Once I knew he’d be okay, I checked him out a little more. ‘Okay, he looks kinda tall lying on that stretcher.’ I thought I was helping a stranger. Turns out I was setting myself up to fall deeply in love with the man of my dreams.”

‘Can you watch David tonight?’ I took her newborn. That night, I missed the call from the Sherriff’s Department.’: Mom loses daughter to suicide, leaving behind newborn son, now lives life ‘to make her proud’

“That night, I went to bed and forgot to take my phone off silent. I didn’t hear it ring. I missed the call. Her sister woke me to 3 words that changed my life forever: ‘Brenna killed herself.’ For so many years, I’d pleaded with God to heal her depression. This is not what I meant. Now, Baby David will never remember his mommy.”