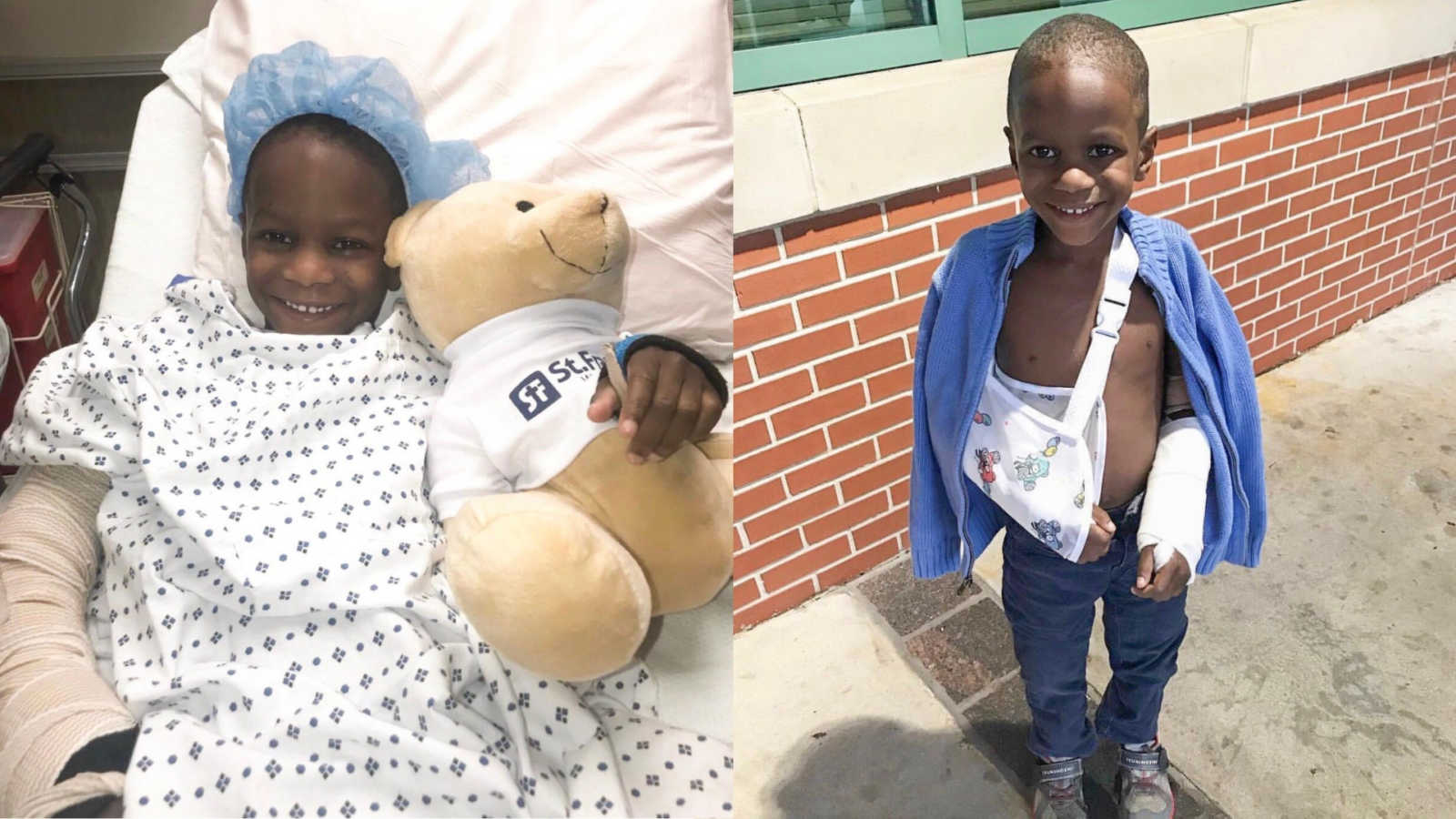 “Last year my son broke his arm – Actually, he broke both of his arms.

His attempt to climb a tree, ended in a trip to the ER.

One of his arms was broken so badly that surgery was likely. We would know for sure by the end of the week, after the break had time to settle.

My son’s face fell as a silent tear trickled down his cheek. He looked in horror at me and his daddy. I tried to assure him that everything would be fine and that if he had to have surgery, the doctors would give him medicine so he wouldn’t feel a thing. It didn’t work.

His terrified look did not go away. It didn’t go away all week.

At our follow-up appointment, the doctor confirmed that surgery would be necessary. My husband held my son as he became frantic.

Once the doctor left, my son looked up in disbelief and said, ‘Really, Daddy? Are you really going to let them CUT MY ARM OFF?’

Our poor boy had spent the entire week thinking that ‘surgery’ meant cutting your arm off. He never talked about it. He never questioned it.

It hurts to know my child worried so much, and never brought it to me. I could have eradicated his deepest fear in a couple of minutes if he would have just confided in me – his mama, who loves him more than I could ever explain.

My son was only 5, and didn’t know a lot about fear and communication.

And to be honest, I don’t know either.

When I think about it, I wonder how many of my fears could be lessened if I shared with someone who has walked a similar path – someone who might know a little more about life than I do.

I wonder if the thing I worry about most, the thing that sucks so much of my focus and energy – What if it isn’t even real?

What if, like my son, I obsess over a horrifying scenario that is entirely made up?

Listen up friend – That thing you worry about constantly, it doesn’t have to control you.

When we give our fear so much energy, it becomes bigger and bigger, until it towers over our moments of joy. It consumes us, and casts a shadow over all of our days. It blocks our view, and all we see is our worst nightmare.

The thing about our biggest worries, is that they stem from something very personal to us. They grab on to some bit of insecurity or low point and magnify and manipulate itself into a belief that replays on a loop in our minds.

But it’s a lie. Fear and anxiety, they are both dirty liars.

The past has no hold on our future.

If you let it in, the truth can drown out the noise of our fear.

That severed relationship, it doesn’t mean that you will be alone forever.

That rocky path you are walking with your child, it doesn’t equate to a lifetime of struggle.

This tough season of loss and hardship, it doesn’t mean you will never be happy again.

The job that just doesn’t fit, is in no way an indicator of your work ethic or your worth.

The words that have been used to cut you down, they have zero credibility.

That one-time failure has no say in your future success.

Don’t accept that nagging thought that sets up residency in your mind.

You do not have to keep that lie that you have accepted.

Kick it out, and in its place welcome in some fresh dreams and expectations. You owe it to yourself to not waste today focusing on a lie about tomorrow.”

This story was submitted to Love What Matters by  Momstrosity. It originally appeared on their Facebook page. Submit your own story here, and subscribe to our best stories in our free newsletter here.

‘I laid with my son before bed. I looked in his eyes, and noticed tears started to run down his cheek. This was a look of defeat. ‘Okay mom, I’m sorry I am bad.’

‘Are they ALL yours?’ My husband loves to whisper, ‘Not all of them are mine. My wife went through a wild phase.’