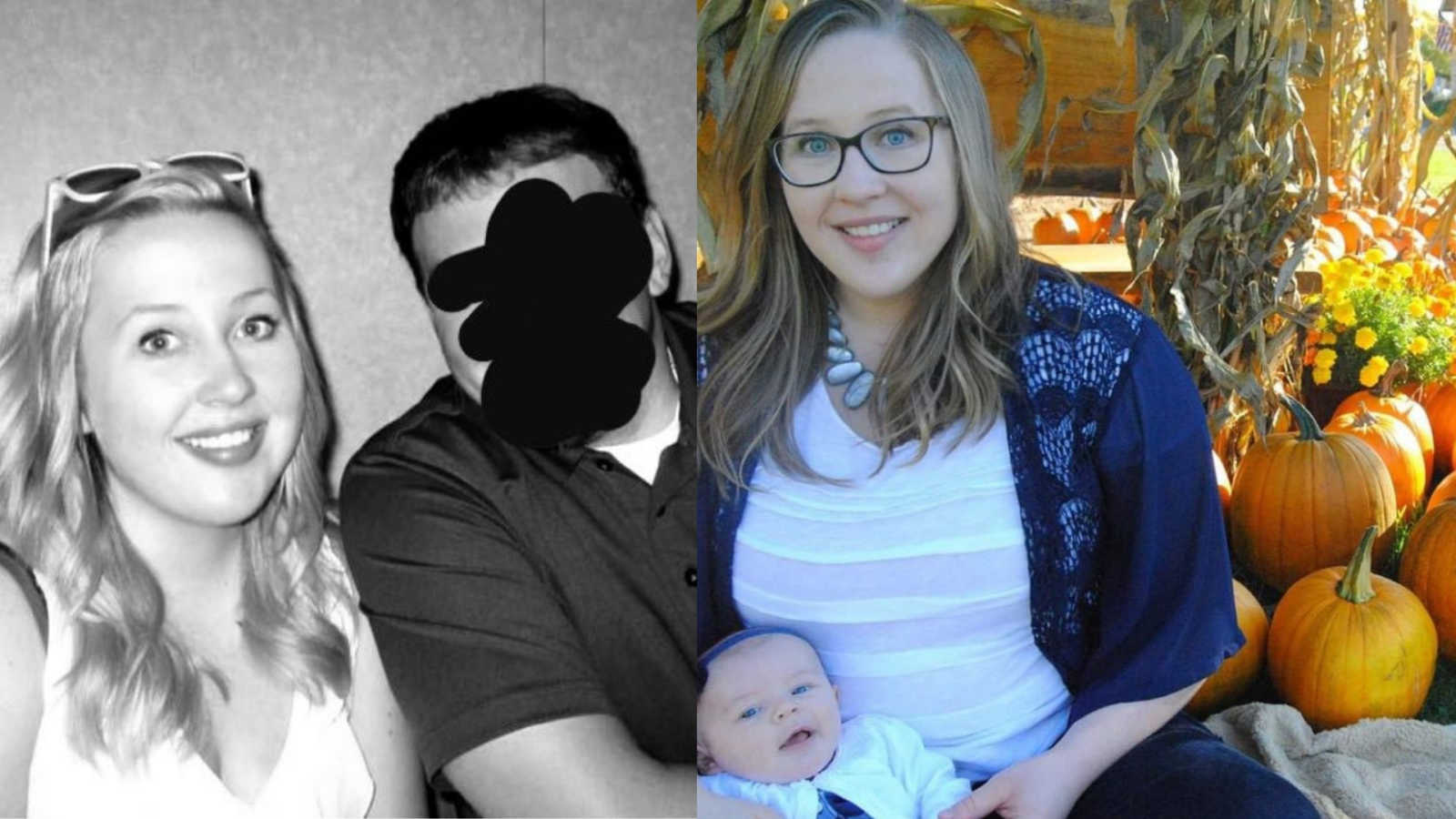 “In the summer of 2014, I was 20-years-old with severe depression and generalized anxiety disorder. I was doing anything, albeit in the most reckless and unhealthy ways, to not feel that pain. In the midst of this, at what I could point to as the lowest I have ever felt, I met him. In the beginning, I thought what we had was perfect. He was the first guy I had ever considered a boyfriend and brought home to meet my family. He always wanted to be with me and know exactly what I was doing, where I was, who I was with and when I would be back. I found his instant attachment charming. I felt so lucky that anyone could take such an interest in me. I vaguely knew of a bad breakup he had with a girl years before, but did not know any of the details, nor did I bother to ever ask him.

We quickly moved in together. It wasn’t long until I started picking up on red flags. We would make plans, but they would fall through because he wouldn’t get himself off the couch- saying he felt sick. He had frequent mood swings at the drop of a hat; manic hyper-activeness, anger, sleeping all day, being generally snippy for no reason. We were on a constant roller coaster- one day we were happy and in love, and the next he hated his life and it was somehow my fault. My family was also picking up on these issues, and when I would show up to events all alone, they would voice their concerns. I did my best to reassure them that everything was fine.

Since I was a waitress I always had cash on me and I started to notice money missing. I would tell myself I miscounted. Where else could it have gone? I thought there was no way someone close to me could disrespect me like that. I asked him but all he would say was ‘hmm, that’s weird.’ After this happened a few more times, I was fed up. One-night I purposefully left only $20 in my purse, and the next morning it was gone. I was furious. I confronted him right away. He still would not tell the truth, no matter how much I demanded answers. Looking back, this was the definitive point I should have walked away. I tried to break it off and move back home, but when I started packing, he flipped a switch, acting neurotic and saying how he would kill himself if I ever left. That scared me into staying and continued to do so every time I tried to run.

8 months into our relationship, his mother told me something that deep down I already knew; he is a drug addict. They were hiding the truth from me because he was so afraid, I would leave if I found out. She told me they were taking the right steps to get him clean. When you are a girl who had lived all of her adult life lonely, 8 months might as well be a lifetime. I was not giving up. I was sure that this was just a speedbump and that we could power through any obstacle that came our way. I thought we were a team. I was wrong.

Months of sporadic yet cyclic behavior passed. I got my wisdom teeth removed, and when I went to take one of my pain pills the next day, I realized they all had been replaced with Tylenol. He apologized and promised it would never happen again. I stayed. He stole my money and lied about it to my face, telling me I was crazy. I tried to find better places to hide it. I stayed. I routinely went through his phone and found messages between him and drug dealers. I blocked their numbers from his contact list. I still stayed. I was paying for every single bill, including groceries and our dog’s epilepsy medication- he was ‘working’ part time but I never got a cent from him for help. I tried to break up with him so many times- every time, he would go into gory detail about exactly how he would end his life. My anxiety was at an all-time high. I felt trapped.

On Christmas Eve I found out I was pregnant. I was an absolute mess. When I told him, he reassured me that we would get through it together, that he would take care of me. He told me we would be okay. Time went on. My belly was growing. I was sick all day almost every day. I was working full time while he spent most of his days doing whatever he wanted, from getting high and fishing on his boat to withdrawing on the recliner at home. I was exhausted and numb. Arguments escalated to holes in the wall, breaking things, getting things thrown at me. I tried to avoid being home as much as I could- working and constantly going on walks or to beaches with our dogs. ‘When Nora is here, he will change.’ I repeated that sentence like a prayer through every day.

A week before Nora was born, we had our biggest fight yet. It started simply enough. I was lying in bed, and he came to our room. He was stumbling around and slurring his speech. This was the most intoxicated I had ever seen him. I told him he could leave or sleep on the couch but there was no way he was crawling into my bed with whatever he was on. He tried moving me over, but my big baby belly and I wouldn’t budge. I was so done playing blind that I didn’t even care what happened anymore. My dog started nipping when he hit him over the head. He lied on top of me, choking me and biting my arms. I kept trying to push him off or roll over, but it was no use, he was too heavy. I felt for sure this would be the night I died. I was screaming and crying. He got up and started moving for the shotgun he kept in a case in the corner of our bedroom, mumbling how ‘this is over.’ Luckily he was so wasted I was able to push him out of the way and towards the stairs. He slowly started walking down them, looked back and said, ‘you’re lucky you’re pregnant.’ I locked the bedroom door, heard him get into his car and peel out of our driveway. I spent the entire night crying, apologizing to the life inside of me and wondering how the stress didn’t induce labor. I went to work the next morning like everything was fine. ‘When Nora is here, he will change.’

Finally, my beautiful girl graced the earth with her presence. She was perfect in every way. Everything felt so surreal but holding her lit the flame in my heart and soul that had been burnt out for so long. It was up to me to protect her from anything that could harm her. Failure was not an option. It took 2 days after coming home from the hospital to finally end that awful mess of a relationship. When I went looking for the pain pills prescribed to me (I thought I hid them well), I instead found they had been replaced with Tylenol. Old dog, old tricks. I went to his jeep to try and find them, if there were any left. I didn’t find them, but did find plenty of syringes, burnt spoons and lighters in his center console. I called the police. I tried to keep him there until they arrived, standing in front of the doorway. I didn’t think he would lay his hands on me when my entire insides were still healing. I was wrong. He was long gone before authorities arrived. I gave the officer my statement, packed what I could and left with my girl. I checked my account balance at the nearest ATM and found there was -$33 in my account. He was writing checks to himself and forging my signature for months, totaling $2,000. The last check written was a day after Nora’s birth.

We moved into my mom’s house that day. For the first time in so long I felt strong and truly free. I was completely overwhelmed and underfunded but could finally look to the sky and see the silver lining.”

‘My boyfriend closed-fist punched me in the face, knocking me off my feet. My 230-pound boyfriend split open my face. The past 6 months of my life have felt like a slow torture.’

‘It’s fine. It’s fine.’ His words replayed on a cruel loop after he left. I sat on a table in a dark room, bleeding and trying to make them mean something like comfort. This stuff did not happen to ME.’

This story was submitted to Love What Matters by Katie Hauswirth. Submit your story here. For our best stories, subscribe to our free email newsletter.

“Her birth parents wanted to spend time with her. I wasn’t sure if I would see her again. All I could do was pray.’: Mom describes emotional adoption, ‘She is our greatest joy’

‘Up until this moment I refused to call them ‘mine.’ I referred to them as ‘ours.’ The social workers’, the state of California, the taxpayers. That day, they became MINE.’

“There was no logical reason, in our minds, to start a family. But, as soon as those girls locked eyes on mine I knew… I would kill or die for them.”

‘I woke up on my wedding day to the phone ringing. ‘Come down right away!’ It wasn’t my fault. It wasn’t fate.’: Twice widowed woman recounts sudden losses of fiancés, ‘There’s no shame in grieving’

“I remember a deafening silence and then a loud scream, ‘MIKE!!!’ I ran until I collapsed and heard the sirens.” 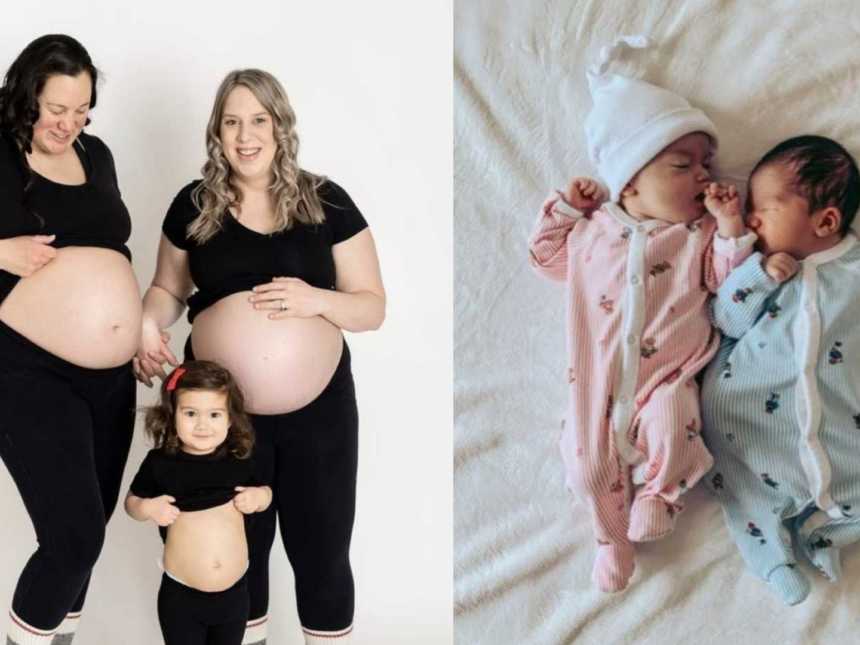 ‘Tash, I see a faint line. I think you’re pregnant too!’ Could this actually be happening?! Could we BOTH be pregnant?!’: LGBT couple deliver babies 2 weeks apart after 7-year infertility battle

“We were both trying at the same time. But with so many previous failures, what were the odds of both embryos sticking? ‘What?! Seriously?! How?! Are you crazy?’ Our doctor said, ‘I’ve never seen this before!’ We had to juggle life with three under three.”