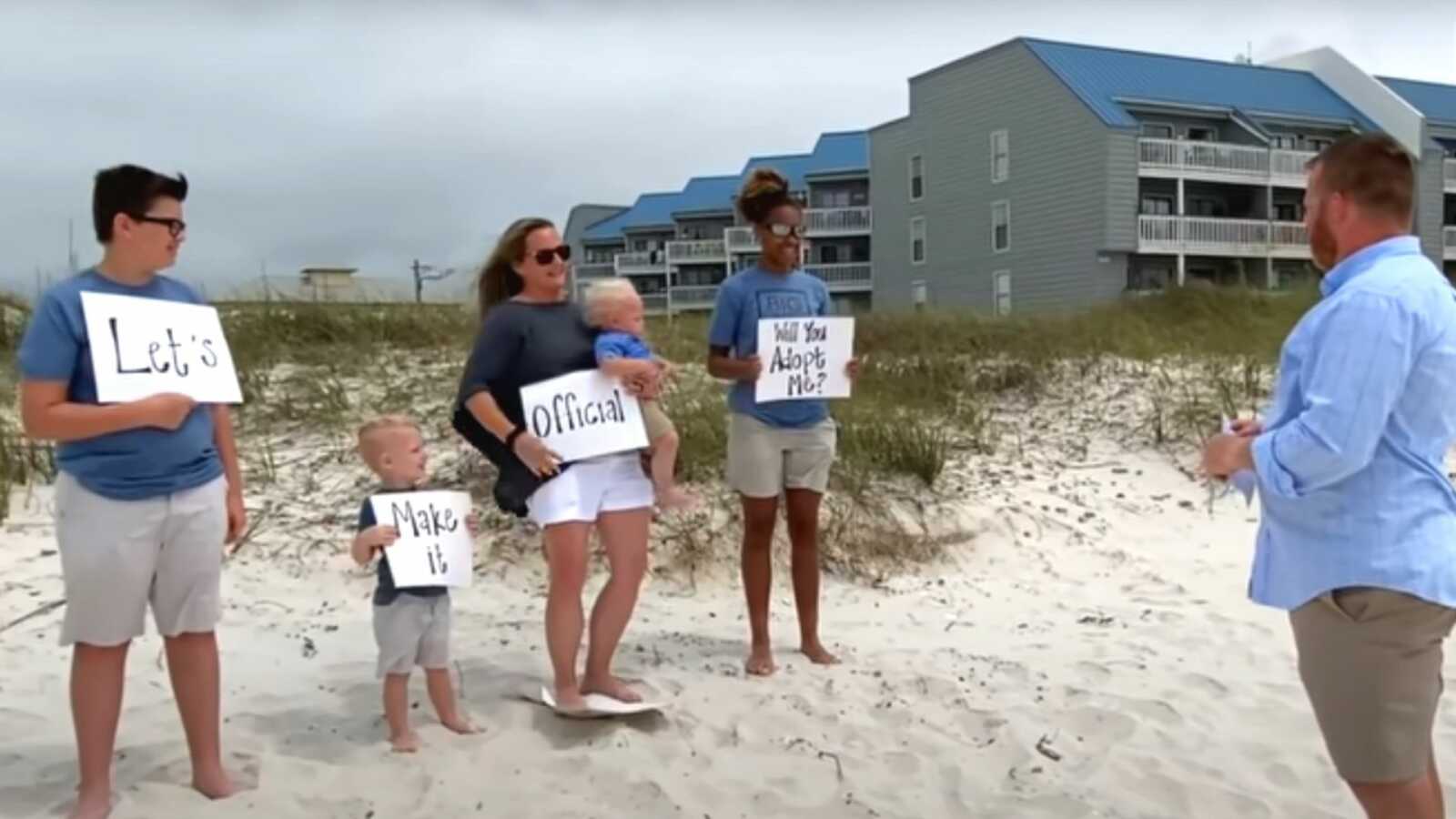 Daniel Donaldson couldn’t have asked for a better birthday.

As a youth sports coach in Haleyville, Alabama, Daniel is a mentor to a lot of kids. But there was one in particular with whom he formed a special bond.

Fourteen-year-old Alecia quickly became close to Daniel in the year after they met. So much so that, when he found out the teen was in foster care, he didn’t hesitate to take her in as one of his own kids.

The Donaldson family welcomed Alecia with open arms. They hoped she would eventually want them to adopt her, but they also didn’t want to put any pressure on her to say yes.

Instead, they let her know that it was entirely up to her. If and when she wanted to officially join their family, all she had to do was let them know.

A few months before Daniel’s birthday, Alecia asked his wife Tiffany about starting the adoption process. From there, the two of them, along with Alecia’s three new siblings, began to plan a super special way to reveal the news to Daniel!

In the video reveal, you can see how hard they all worked to make this happen. Blindfolded, Daniel holds up posters explaining what is about to happen.

“This man here started out as just my coach, but he stepped up when he didn’t have to,” one of the signs reads. “He is now not only my coach. My encourager, my protector, my provider, but now the man I call daddy.”

After going through all of the posters, Daniel removes his blindfold to find each member of his family holding their own poster. Alecia’s reads, “Will you adopt me?”

After having Alecia with them for 524 days, it was clear that Daniel was more than ready to say “yes.”

“I will always remember that day and the hug he gave me,” Alecia said. “When he hugged me I felt so happy and safe.”

Watch the emotional reveal in the video below.

‘I wouldn’t be here if she wasn’t in the house.’: 9-year-old hero saves parents from carbon monoxide poisoning with clever trick

‘I was single with a big, empty house. I had so much love to offer! ‘Can you take in a 10-month-old baby?’ A lightbulb went off.’: Single woman embarks on emotional foster mom journey, ‘I’d repeat it all over again’

“I buckled baby J into his seat and gave him a quick kiss. ‘I’ll see you later.’ The lump in my throat was painful as ever. I turned away to see J’s brother crying. I absolutely lost it. I panicked, trying to catch my breath. I went from being a mom to no longer being a mom in a matter of minutes.”

‘Did she stick her finger in the power socket?,’ strangers asked. They were being ignorant, insensitive.’: Little girl embraces ‘fuzzy’ hair caused by Uncombable Hair Syndrome, ‘I look like a lion with a crazy mane’

“She was picture perfect, blonde hair, blue eyes, so cliché. But around 3 months, we noticed something different. Her hair was growing straight up, not flattening down. It glistened in the light. ‘What’s wrong with her hair?’ Complete strangers would peer into her stroller, stare, take pictures without asking. One lady said, ‘Your daughter looks just like Doc Brown, the crazy scientist from Back to the Future!’ Our little girl was so special.”

‘My mother said, ‘We need to have a talk.’ She placed me in a trance. She kept me close, controlling all my decisions in the name of ‘love.’: Narcissistic abuse survivor urges ‘you deserve to be safe and happy’

“She made me feel special, then she controlled what clothes I could wear, what friends I could have, where I went to college, and my wedding. She wanted to ‘show me off’ to her friends. But there was a huge price to be paid. She found any excuse to keep me with my vices if it meant keeping me close to her.”

‘Your girl looks sleepy,’ I knew something was wrong when a doctor, not my normal midwife, came in.’: Scary birth of miracle baby born during Covid-19 leaves mom ‘overwhelmed with gratitude’

“When she was born, everyone in the room gasped. Our rainbow baby became our miracle baby.”