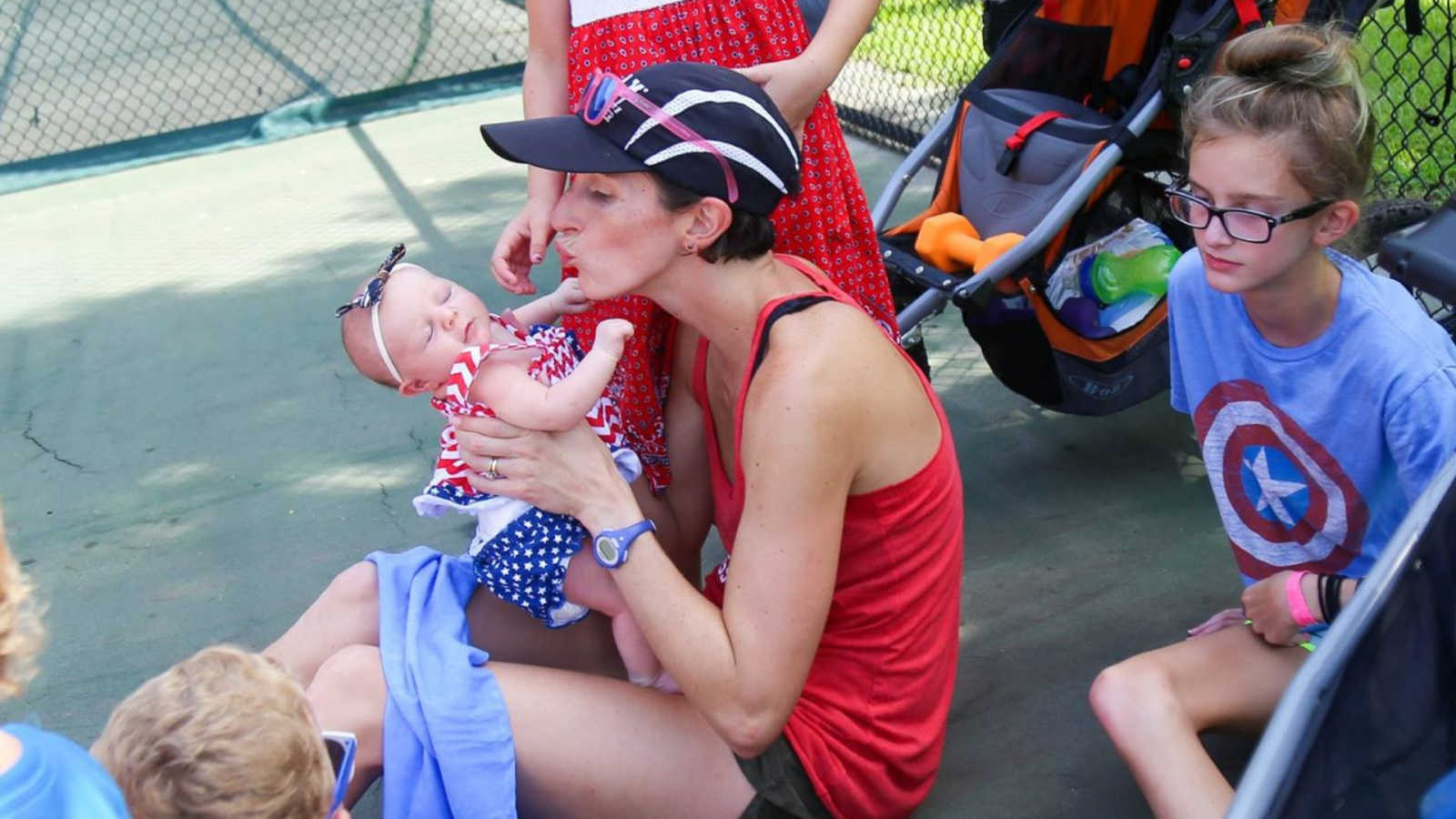 “I am not new to motherhood. I have confidently walked for nearly 13 years in mom shoes. In my case, they’re athletic shoes, since I am a fitness professional, and I own my own business that provides a community and self-improvement opportunities to other moms. My three girls—12, 8 and 18 months— are the center of my life.

I think I’m a really good mom, yet a traumatic event in 2017 changed everything I thought I knew about being a mother.

It was a typical hot July day in Georgia. I was nursing my then five-week old while my oldest child was lacing up for cross country conditioning. This was the first baby I had been successful in breastfeeding. I made it through the crucible of bloody nipples, self-doubt, and we were finally rocking and rolling. I sat comfortably at home on my love seat, while keeping a close eye on the time as not to be late (again.)

The baby suddenly gagged and then violently vomited what seemed to be a weeks’ worth of breast milk.

I held her up and she was lifeless. She was unresponsive.

I immediately told my oldest to dial 9-1-1. She began to panic asking if the baby was dead. She was trembling, and I was trying to figure out if the baby was breathing. I was putting my nose to her nose and her heart to my ear. Within 20 seconds, I realized my oldest was unable to call; she dialed 1-9-9 in utter fear. I quickly snatched the phone and called.

Being only one mile from the hospital, I heard a siren rather fast. I called my pediatrician’s emergency line and got him. He is a Godsend of a doctor. He was calm, and I was far from it. I was still unable to tell if she was breathing. He told me to lay her on the ground and to watch her belly. If it was rising and falling, she was breathing. If it was, I couldn’t tell.

The ambulance arrived and seeing my tiny girl on the enormous stretcher is a memory that is etched in my mind forever. She took up about 1/20th of it.

I looked at my oldest, and she said through her tears, ‘If the baby dies, can we please adopt because I really like having a baby sister.’ I looked back at the stretcher and the two male paramedics examining her. I needed them to do something. Say something. Is she breathing? Is she ok?

Within one or two minutes, we saw her move. She opened her eyes and looked totally out of it. The E.M.T.’s assured me she was fine and left. But I wasn’t ok. What was that? What had just happened?

Within a half hour my husband and I decided to take her to the E.R. to have her examined by a physician. I needed someone to tell me she was perfect. I needed validation. We were seen and admitted. Apparently she had aspirated on breast milk. Great, I drowned my baby. This is all my fault.

After 48 hours of observation and about half that number of doctors, nurses and residents who all left scratching their heads, we were getting released from baby hospital jail. For anyone who has spent time in a pediatric hospital, I commend you.

We were told it could possibly be reflux, given medication for reflux, and released with, ‘we don’t really know.’

B.R.U.E. is a medical term I am now aware of: Brief Resolved Unexplained Episode. We were told she was ‘more likely’ at risk for a medical term I was aware of—S.I.D.S. I wanted to chain myself and her to the metal crib until we had an answer.

The apnea monitor they sent home with us was a nightmare. If all the tests, wires, beeps, and buzzes of the two days in the hospital weren’t enough, we were to use this monster every day and night. That lasted about 20 minutes. I put the apnea monitor in the closet and closed the door.

I would just hold her 24/7 to make sure she didn’t stop breathing.

I continued to live my life. Just now, in immense fear.

The following weeks and months were a blur. I didn’t want to be alone with her. If my mom couldn’t be here, I would be with my brothers or friends. In short, everything suffered. My business, friendships, my house, my life were unraveling.

My anxiety level stayed at an 11. You know the feeling when someone slams on their breaks on the highway going from 70 to stop? That’s how I felt all.the.time. I would jump across the kitchen when toast popped out of the toaster. I was sweating. A lot. I was shaking and I couldn’t think clearly. My communication skills were gone.

The impact of this traumatic event, while I didn’t realize, was affecting everything in my life. I couldn’t get tasks started, let alone completed. I spent all my time worrying about the ‘what-ifs.’

For the last 7 years, I have spent so much of my time being a leader for the moms in my fitness group. For the last 12 and a half years, I have spent all of my time being a co-leader for my family. Anxiety stole my ability to lead. I wanted to hide. All of the things that used to be done so naturally, weren’t getting done at all. I thought I could do it with my eyes closed. But could I?

Turns out, the answer is no. One cannot sit back and hold a tiny human 24/7 while her family and business carries on. Luckily, in my business I am surrounded by my caring mothers. Friends, clients and colleagues stepped up and helped me.

Several close friends told me about a local counselor who specializes in prenatal and postnatal care. I was scared to call. I wanted to be ok, but I wasn’t. I wasn’t myself. I had lost my naturally carefree spirit and from-the-gut instinct that so many admired. That I admired.

I was noticing I was increasingly scared to feed my baby real food. I was scared she would choke. This ultimately was the reason I called. My anxiety was preventing me from feeding my 1-year-old baby. She was the reason I called, not me. It took about a month of almost calling, my fingers slippery with stress sweat until I hit ‘call.’ I made an appointment. I showed up.

The following weeks were a blessing. I didn’t know it was what I had needed. That’s funny, you don’t know what you need when you’re in the thick of it. I didn’t know I needed to sit across from a professional counselor, for her to look me in the eyes and tell me I am valid in my fear.

I learned about wants and needs and making choices. I learned about tools, mental exercises, and being intentional: It was everything I needed. I am now able to feed my 18-month-old, because I trust myself and I trust her.

I tell this story now, to let you know that if you are scared, you are valid. Make that sweaty phone call to a licensed professional counselor, I beg you. I wish I had done it sooner. If you’re struggling with Post-Partum Anxiety, P.T.S.D., Post-Partum Depression or anything related, I want to assure you there is help.

You are enough. Your children are worth the climb out if the darkness, and you are, too. Maternal mental health is so important.

This story was submitted to Love What Matters by Rebecca Paull, a guest author on Momstrosity. It originally appeared on their blog. Do you have a similar experience? We’d like to hear your important journey. Submit your own story here. Be sure to subscribe to our free email newsletter for our best stories, and YouTube for our best videos.