“On the night of November 2, 2013, he asked me to be his girlfriend in a wooden lifeguard station overlooking the lake behind my house. I was barely 20, dressed in a sparkly old homecoming dress and his suit coat.

He was planning to go back to school in Utah, and I was having health problems that would probably keep me in the area. I didn’t know how we would make the distance work, but I knew that in that moment, it would be absurd to say no to such a charming, amazing man.

Eight months later, we were back at that lake in my family’s canoe, recreating our first date, and he asked me another question, complete with the biggest diamond ring I had ever seen. I somehow managed not to knock the ring into the lake in my excitement, and we began to plan out our life, a continuation of the fun, imperfect, blissful relationship we had.

When November 2, 2014, rolled around, he told me he didn’t really believe in anniversaries. ‘We’ll celebrate our first eternity,’ he told me. I considered this another one of his quirks and left it at that. Less than two months later, we were married in the LDS temple in DC, surrounded by happy family and friends.

At first, our marriage seemed like the dream, a lifetime sleepover with my ‘person’. It’s hard to say when things began to change, because every bad thing was outnumbered by laughter and cuddles and warmth. When we fought, we fought. It would last long into the night. But I told myself ‘the first year of marriage is supposed to be hard, and besides, it’s mostly wonderful.’ And then one day, I caught him in a lie, and he broke.

After that, he would vacillate between his charming usual self and a moody, angry, listless person I didn’t recognize. He wasn’t violent, but in his logic, if I expressed concern or criticism, I was ‘being too hard on him.’ If he did something wrong, it was because he was just a bad person, and that’s what bad people do. I wasn’t allowed to go to a therapist or tell anyone. Things spiraled. Each time, I rationalized. Each time, he dismissed my anger. I caught him in lie after lie, and I became jealous and paranoid.

On the night of November 2, 2015, we didn’t celebrate. We had been rocky for months and capsizing for days. I tried to bail out the water with all-night discussions, meeting with church leaders, books, compromise, prayer, support groups; anything I could think of. I even finally broke his rule about not telling anyone about our problems and got our families involved. But he was determined to sink. I had to choose whether or not I would go down with him. That night I decided I would stay. I made macaroni and cheese so he would have dinner. And when he got home, he smiled. Today, he’s Dr. Jekyll, I thought. But then the smile faded, and the melancholic rage returned for the fourth night in a row without any trigger or warning.

After a few hours of sobbing and yelling, I stumbled up the stairs of our basement apartment in Utah, barefoot. The winter had set in early, and I wasn’t wearing a coat, but I hardly noticed. I stood in the dark, gravel parking lot, sobbing, hoping he would follow me and tell me to come back home and that everything would be okay. He never came. I called my best friend. I don’t remember what I said or if I was even intelligible, but she found me wandering the streets and took me to her apartment.

When we got out of the car, she put her jacket around my shoulders. I looked up at her, completely overwhelmed by this unfathomable gesture. It was cold. She needed a coat. Why would she give it up for me? What had I done to deserve it?

She turned to me and said, ‘I’m doing this because I love you.’

And my breath caught. It hit me that I did not understand that kind of love. I didn’t remember the last time my husband had told me that he loved me. I no longer recognized basic kindness. I officially moved out three days later.

After the clumsy courage of that first night, I began to pull myself out of his reality and wring out his controlling influence, with the help of therapy, friends, and family. It was as if I were suddenly learning to see again. I learned to recognize emotional and verbal abuse like a toddler learns to recognize shapes.

After the divorce was finalized, I traveled to places he told me I couldn’t visit. I finished my degree and moved to Boston, a city I had never even seen, where I got my master’s degree and went on to work for amazing companies like Harvard Business Review and MIT Press. I went to therapy, and I made lifelong friends. I have provided resources for people who are going through similar situations.

I am no longer the scared girl who barely managed to open the door and call someone to pick her up. I am much different now, but I am so proud of that frightened, miserable past ‘me’ who was brave enough to say no and mean it.

But during that time, November 2 became a strange mixture of a Luke Danes-like ‘dark day,’ and also a celebratory day when I recognized that sometimes the bravest thing you can do is leave. I usually take the day off of work and school and stay inside to avoid people. My emotions are raw and bubble to the surface. Which brings us to November 2, this year.

Four years ago, I said I would not continue to be mistreated. I put my foot down. And then another foot. And another. And I walked away.

Now, I am engaged to an incredible, gentle, supportive man. We are getting married in two and a half weeks. When we scheduled our final planning meeting with the wedding venue, I saw that the only time that would work was on November 2.

‘It’ll be all right. I’ll be with you,’ my fiancé, Josh, said. He squeezed my hand while I scheduled it.

On my ‘dark day,’ my fiancé and I danced around the greenhouse where we will be celebrating our wedding. We planned out the seating and the slideshow and the playlist and the cake. And when we got home and the sadness finally hit me, he stayed with me and witnessed and validated.

‘I am so proud of you,’ he repeated to me over and over again throughout the day. 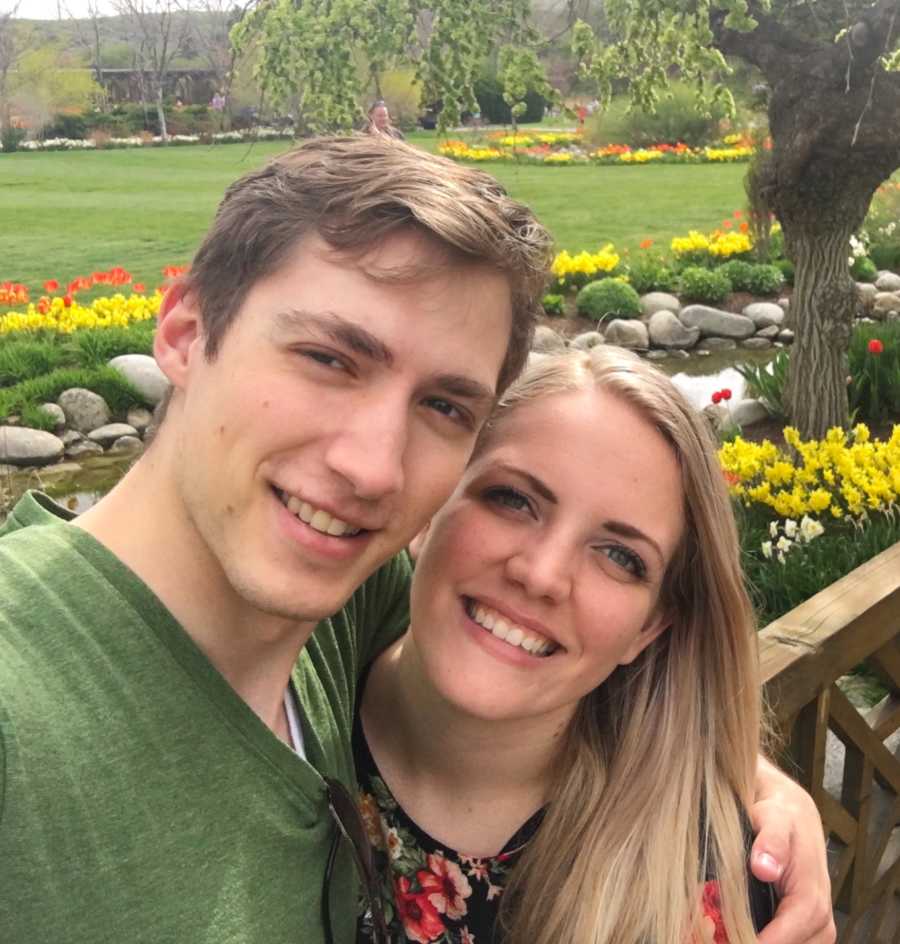 And I realized that I am so proud of myself, not only for getting out of an abusive marriage, but also for doing the work and healing to the point that I could let someone in again.

Although I hesitate to make this the happy ending because marriage is not the solution to divorce and loss is still loss, it was still amazing to see it all come full circle. Dancing with my future husband in front of a waterfall, making new memories over old wounds, is the happiest beginning I could ever hope for.”

This story was submitted to Love What Matters by Jenny Rollins of Orem, Utah. You can follow her journey on  Instagram and Facebook.  Submit your own story here and be sure to subscribe to our free email newsletter for our best stories.

‘I was tossed like a rag doll off a deck by my hair. He tried to take my life in front of my kids.’: Domestic violence survivor escapes abuser, ‘takes her life back’ with the help of her ‘tribe’

‘You disgust me.’ I felt the barrel of his gun against the back of my head. This is the exact handgun I had purchased for him.’: Woman overcomes abuse, narrowly escapes death to ‘be a survivor’ 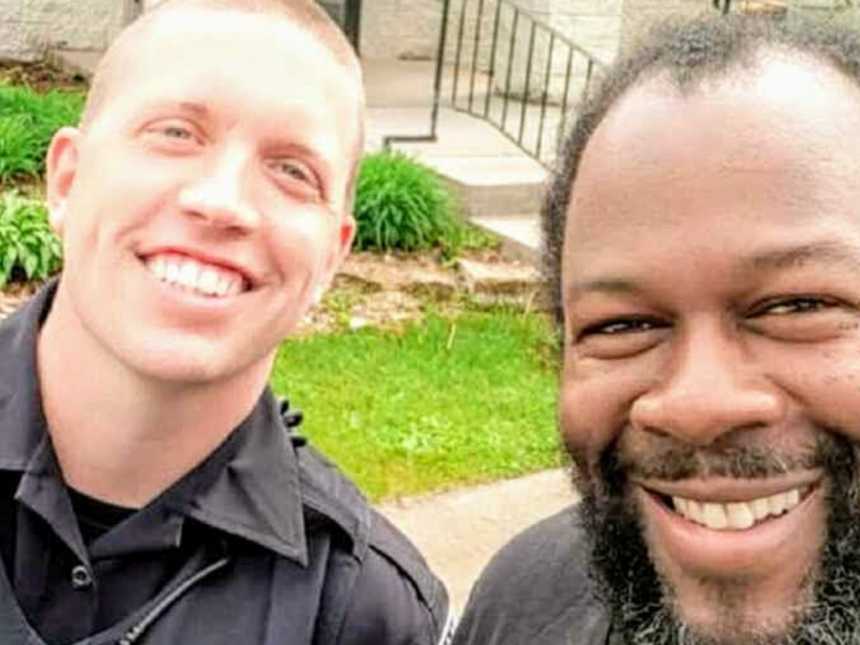 “I told him I wished I was the cop who encountered Floyd, because he’d still be alive today. I told him there are good police officers out there. But most of all, I told him none of that matters, because I was there to listen. Calvin texted me a few hours later: ‘I believe things happen for a reason. We should see each other again.’ I believe him. Today, I listened. And today, I gained an ally and a friend.”

‘Galen, babe. We probably need to get moving.’ He didn’t respond. I thought he was just in a deep sleep.’: Woman loses husband to heart attack after 6-year battle with cancer

“He had a rough night with heartburn. ‘Galen, Galen.’ I set my hand upon his arm. He was COLD. The love of my life, the man I’d been married to for 13 years, was not breathing. The police officer hugged me from behind, tears streaming down my face as I choked on snot. I watched them put the love of my life in a black body bag. I would find out later that week, the EMTs had originally gone to the wrong location.”

“Within 24 hours I went from mothering toddlers, to a 7-year-old. I wasn’t sure what to do. We were walking on eggshells, wondering when the lid would blow. I was closing his bedroom door. He stopped me. ‘Mommy, you’re a really good Mom.’ I slid down the door in silent sobs. Those words, coming from that boy, meant more than any accolade I could ever receive.” 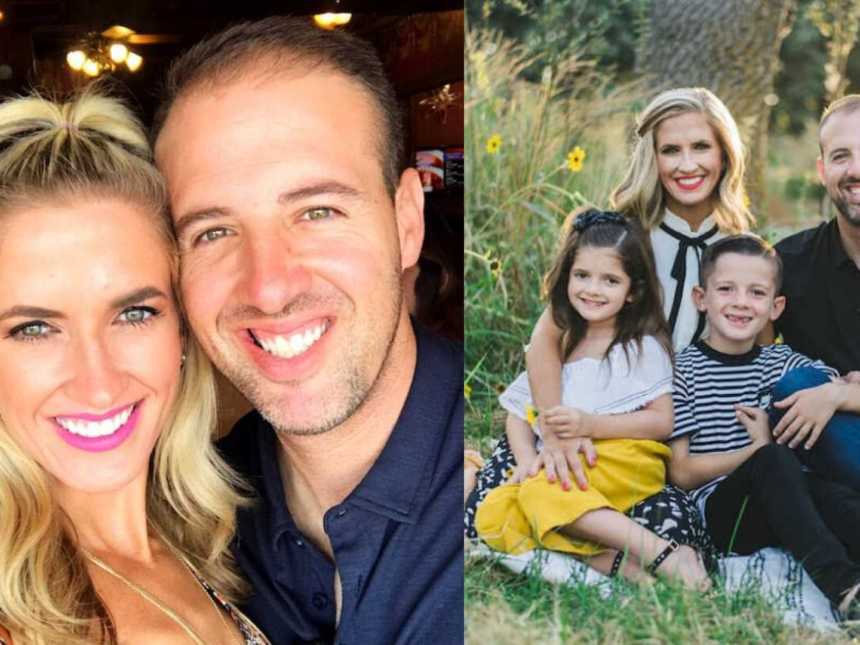 ‘I screamed to the paramdeics, ‘You aren’t moving fast enough. HELP HIM PLEASE.’ I sat in a ball on the Airbnb floor, cradling his face in my hands.’: Woman loses husband to ‘unexplained’ cause, ‘His love carries me through’

“I was startled from my sleep at 10 p.m. from what I thought was Kyle snoring loudly. I quickly realized he was struggling to breathe. I screamed for help. My sisters called 911 as I cradled his face in my hands, begging. Pleading. He quickly turned blue. As I lay on the floor waiting and praying for a miracle, I felt a giant hug from behind, just the way Kyle hugged me.”