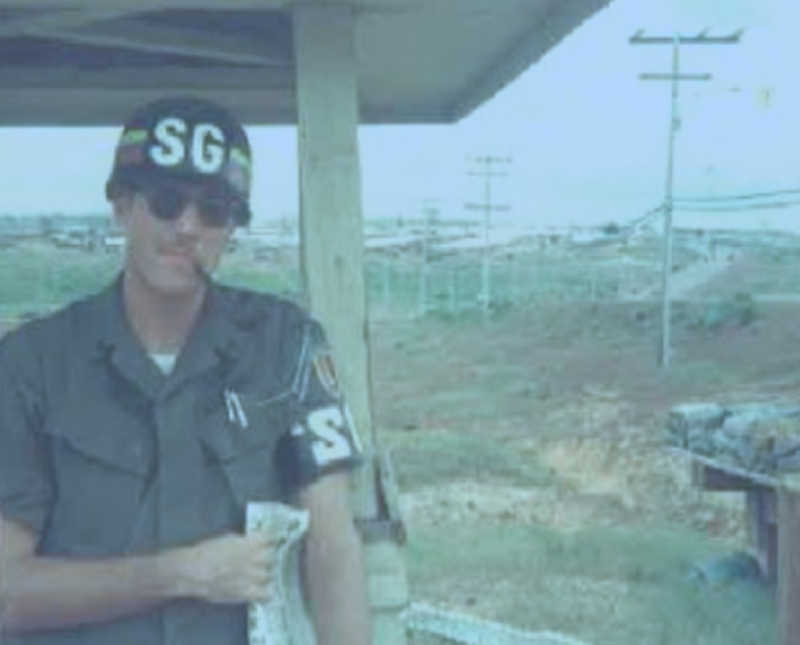 When I was a child in the 1980s, my mom drove a tan station wagon as big as the world. With my sister, our neighbor JJ and whoever else was around, we’d pile in the backseat or the open truck area we called the “way back.” We were never alone as we flopped around, oblivious to the dangers of forgoing seatbelts (or even seats!); my dad’s old Army blanket was ever-present.

Sometimes we sat on it for picnics or the fireworks, and in winter it covered our shivering bodies as we waited for the car to heat up. Mom’s upgraded her vehicle five times since the station wagon days, yet the faded, camo relic still occupies her trunk today.

We knew there was more of a story to the Army blanket than Dad wanted to talk about. Though it looked and felt like a blanket (with little ties in the corners), we noticed Dad called it his “poncho liner” sometimes. And I guess he never hid the fact that he was a reluctant draftee in the Vietnam War. His memories of the war, just like that ugly, green blanket, lurked always in the background of our lives but were almost never acknowledged or discussed.

Sometimes, though, he let hints of his military service seep out.

If he wanted to rouse us in the morning, he’d jokingly sing-hum a reveille tune into his fists, which he stacked together like a fake bugle. When my sister and I were charged with cleaning our rooms or the basement, he’d have us line up for “IN-SPEC-TION!”

To this day, he openly hates any kind of war or guns. He doesn’t swear, but I’ve sometimes heard him mutter, “War is hell.” And even though he’s a lifelong Republican, he forbade even squirt-guns from entering our home.

At some point in my adolescence, I realized my father never yawns. In around 1970, while on guard duty for an officer’s quarters, he was ordered not to yawn — because it’s a sign of weakness — and he willed himself to overcome that natural instinct. Nearly 50 years later, my dad still doesn’t yawn. Just another way the war changed him, forever.

I went on a school rafting trip in 7th grade where we camped in tents, something I’d never done before. After having an absolute blast, I complained to my parents, “Why don’t we ever go camping? It’s so much fun!”

My father’s reply stopped me cold.

“I spent enough time sleeping on the ground in the jungles of Vietnam,” he answered, calmly. “I promised myself that if I made it home alive, I’d never sleep on the ground again. That’s why I won’t take you camping.”

When my 8th-grade class went to Washington D.C., he wrote down names for me to search for on the Vietnam War Memorial. I never found them. But 10 years later he went to a conference in D.C. and, with my mom, made an emotional visit himself. He did find the names. And something changed in him that day, which he didn’t mention for another decade.

In my high school history class, we learned about the Vietnam War. Around the same time, my dad and I enjoyed the short-lived, Vietnam-era TV series China Beach; he dug the music and sometimes pointed out the show’s inaccuracies.

He told me how he’d been a “Shake ‘N Bake Sergeant,” meaning he was a leader with very little training, moved through the ranks quickly because so many others were dying in combat. He never wanted to lead a squad of soldiers. In fact, he naively believed the news of the day and thought the war would be over by the time he finished non-commissioned officer training. Instead, he found himself shipped to Vietnam not just as a soldier, but as a sergeant.

His nickname, the Garbage Man or just Garbage, was a carryover from his college basketball days, where he was a star rebounder and the shortest center in his school’s history. He became Sergeant Garbage.

The war came up again, unexpectedly, when I was in my late 20s, pregnant my first child, his first grandchild. We were kicking around possible names one afternoon. As a crunchy, vegetarian type, I blurted out “Linden,” like the tree. Uncharacteristically for his easy-going personality, he jumped down my throat, “You’d name your child after the man who sent me to Vietnam!?”

Of course, Lyndon B. Johnson! It never even occurred to me. But there it was again, another remnant from the war bubbling up to light. (And you can bet we didn’t name our son Linden!)

And then, not that long ago, in anticipation of his 70th birthday, my dad told me he’d been thinking for a long time about all the guys whose names are etched in the Vietnam Memorial Wall. Ever since his visit to D.C., he’d been thinking about all the soldiers who will never get to share their stories with future generations. He was sick of keeping his past locked away in the dark, like his old Army blanket, rarely coming to light and almost never acknowledged or discussed.

After all this time, he was ready to bring those memories out in the open. He asked me to help him write his story, which I gladly did (My Confessions from Vietnam).

He’s not proud of his service. He’ll tell you he wasn’t a good soldier. But he’s an amazing man, a great teacher and an even better dad. 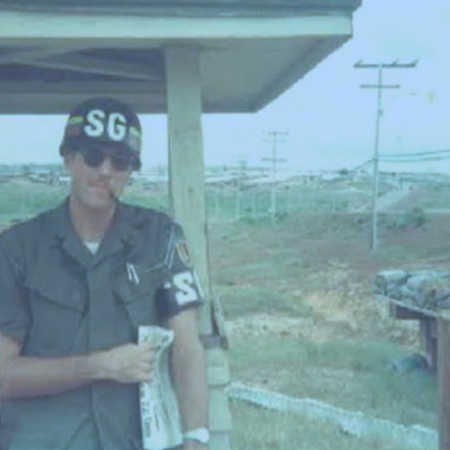 This story was submitted to Love What Matters by Brooke Miller Hall. Submit your story here. For our best love stories, subscribe to our free email newsletter. Brooke is a freelance writer living in Columbus, Ind. Her dad, Mark Miller, is from Racine, Wis., and the author of My Confessions from Vietnam.