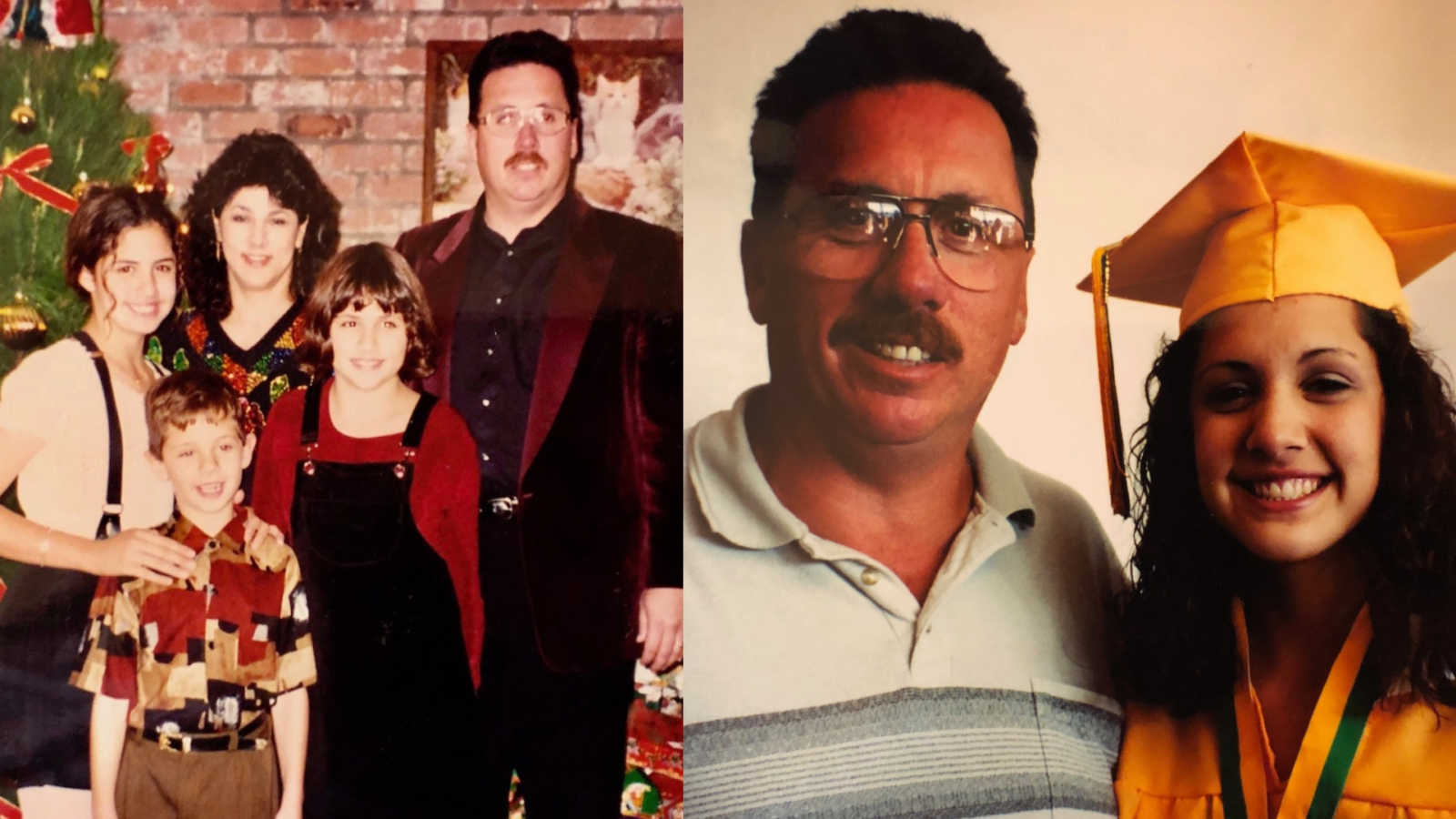 “I had two dads. The first was the absolute love and light of my life. He was fun, caring, playful, adoring, engaged, and taught Sunday school. I watch old home videos of him playing with me and my siblings and I and am so grateful I had a sober father when I was young. I remember reading nightly Devotionals, cuddling on the couch to watch ‘The Wonder Years’ every week, and nights playing games by the fire. I believe the attention and love I received when I was so young provided a layer of protection around me when I myself turned to the streets in my addiction in my early 20’s. I had a good foundation and some values that I never let go of.

Financial trouble hit our family, and I remember my dad stopped going to 12 step meetings, stopped attending church with us, and started working long hours. The disease of alcoholism takes many forms and it creeped back into our lives as ‘workaholism.’ Once my sister and I made a plan and went to my dad crying, begging him not to work so much. We said we would rather live in an apartment and have him home more. But who can blame a parent for wanting to keep the roof over their children’s heads? Especially when you’ve let your Faith go. I know from my experience the world is a lonely scary place when we’re trying to go at it alone.

My second dad appeared when we had to sell our house and move closer to family in another county. He was depressed and had a hard time keeping a job. I remember being in 5th grade, staying up late pouring over freshly printed glossy car brochures to help him memorize car facts for a car salesman job. I will never forget the feel and smell of those damn brochures. This happened many times as he struggled to maintain regular employment. One evening he cried and confessed to me he had thought of ending his life. I have only a handful of moments in my life I can say were pivotal, life altering moments in time. This was one. This also started an unhealthy relationship dynamic between us which lasted 25 years.

Shortly after that, my dad relapsed. He had been sober over 10 years at the time. He was sober when he met my mom. My mother and I only spoke of his relapse once, just a few years ago. When I asked her, what happened after my dad relapsed, she simply said, ‘everything changed’ and stopped the conversation there. I felt this same way. Where there used to be laughter, play, joy, and togetherness in our family, there was now anxiety, fear, a feeling we were constantly on the brink of hunger or homelessness.

Subconsciously, I took on what I later learned is the ‘hero child’ role in an alcoholic family. I had always been a good student, but I became hell bent on overachieving. I thought if I brought home enough awards, trophies, good grades, and first place ribbons I could fix my family. What I didn’t know then is alcoholism is a spiritual illness, and only a spiritual remedy could save him. There was no amount of ‘achieving’ I could do to stop my dad’s drinking.

As my dad’s drinking progressed, his relationship with everyone in the family deteriorated. My little sister became ‘the scapegoat’ and my younger brother became ‘the lost child.’ There were fights and blow ups, then the next morning the denial and my parents would act like nothing happened. I threw myself harder into doing more. My mother was concerned I was doing too much as I developed a stress ulcer in my sophomore year of high school. I disregarded her concern and I forged her signature to take extra courses. Anything to make the outside look good for my family and stay out of the house. All this time, my dad drank, worked, and did his best to support me. He did try to show up for my swim meets, was at my graduation, choir shows, and was and will always be my #1 fan. That’s what makes this so heartbreaking. Despite his alcoholism, he has always had a huge, kind heart, and when he was sober, he loved us the best he knew how.

The more subtle and damaging aspects of his alcoholism weren’t visible. He didn’t abuse us, he kept a roof over our heads, and showed up to important things. However, the relationship we had was not appropriate. My father always felt he could confide in me and talk about things with me that he couldn’t talk to anyone else about. I became ‘parentified’ or his emotional caretaker from age 10. I carried the weight of knowing things kids shouldn’t know about their parents and the stress of adult problems.

The codependent relationship created by his alcoholism led me to seek unhealthy relationships as soon as I was able to start dating. I dated other broken children of alcoholics, physical abusers, married and later divorced a man with narcissistic tendencies, because I was groomed for so long to be taken advantage of in relationships. From my father I learned that my worth to men was measured in how much I could give, that my feelings didn’t matter as much as theirs, that my value lay in my achievements, not who I was. I learned that my perceptions and truth were invalid, as reinforced by many moments of denial from my mother about the not so pretty reality of my father’s behavior when drunk. All these things I learned led to the first part of my adult life in physically abused, emotionally abused, and on the brink of suicide.

Thankfully I was able to get help and change those learned behaviors through finding myself worth and getting therapy. I don’t blame my father for me choosing those unhealthy, abusive relationships, I blame the disease of alcoholism. However, as I started to heal and found a healthy relationship (my current husband) my dad still drank. With my newfound self-awareness and self-esteem, I realized I no longer wanted to be his emotional caretaker, to not have any boundaries with him, and to let him continue to use me as his therapist. There was one incident in particular when I realized how dysfunctional our relationship was, and I knew something had to change. I sought out Adult Children of Alcoholics meetings, found a therapist who specializes in working with adult children of alcoholics and narcissists, and realized I need to cut him out of my life.

I didn’t speak to him and went ‘no contact’ just over a year ago for several months. I ignored his phone calls and messages for months. It broke my heart, but I needed time and space in my life to heal. Slowly, on my terms and in my time, I let him back into my life. Our relationship today is so different than it’s ever been, and I’m still navigating how I want to show up in our relationship. I no longer play the role of his emotional caregiver. I let him take care of himself and his feelings. I decide how close I want us to be, am more discerning about how much I see him, and am able to stop conversations when it’s getting uncomfortable. Miraculously, during my time of no contact with him he started going back to church and got into a faith-based recovery program for his alcoholism. I know he still has a long way to go, but more and more I see my first dad has come back. Who knows maybe in time I will have a third, wiser, sober dad. And this has allowed me for the first time since I was 10 years old just to be his daughter. I’m crying as I write this because more than any relationship in my life, this one has affected me so profoundly, wounded me so deeply, and taught me so much. I hope someone finds hope in this story. I now work as a licensed therapist and life coach working with other women to heal childhood wounds so they can experience the freedom and joy from codependency that I have today.”

This story was submitted to Love What Matters by Cassandra Solano of California. You can follow her inspiring healing journey on Instagram, Facebook and her website. Do you have a similar experience? We’d like to hear your important journey. Submit your own story here, and subscribe to our best stories in our free newsletter here.

‘My dad is the town crackhead. He cried when he met my son for the first time. Every year for my birthday, he gets me a present.’: Daughter to addict urges ‘he was someone before drugs’

’38 weeks pregnant with twins, the doctor said, ‘Your other son has cancer wrapped around all his organs.’: Recovered addict urges ’embrace the challenges’ after birthing twins, Neuroblastoma survivor

‘I went to church. We ate dinner as a family every night. And yet, I became an alcoholic and drug addict’