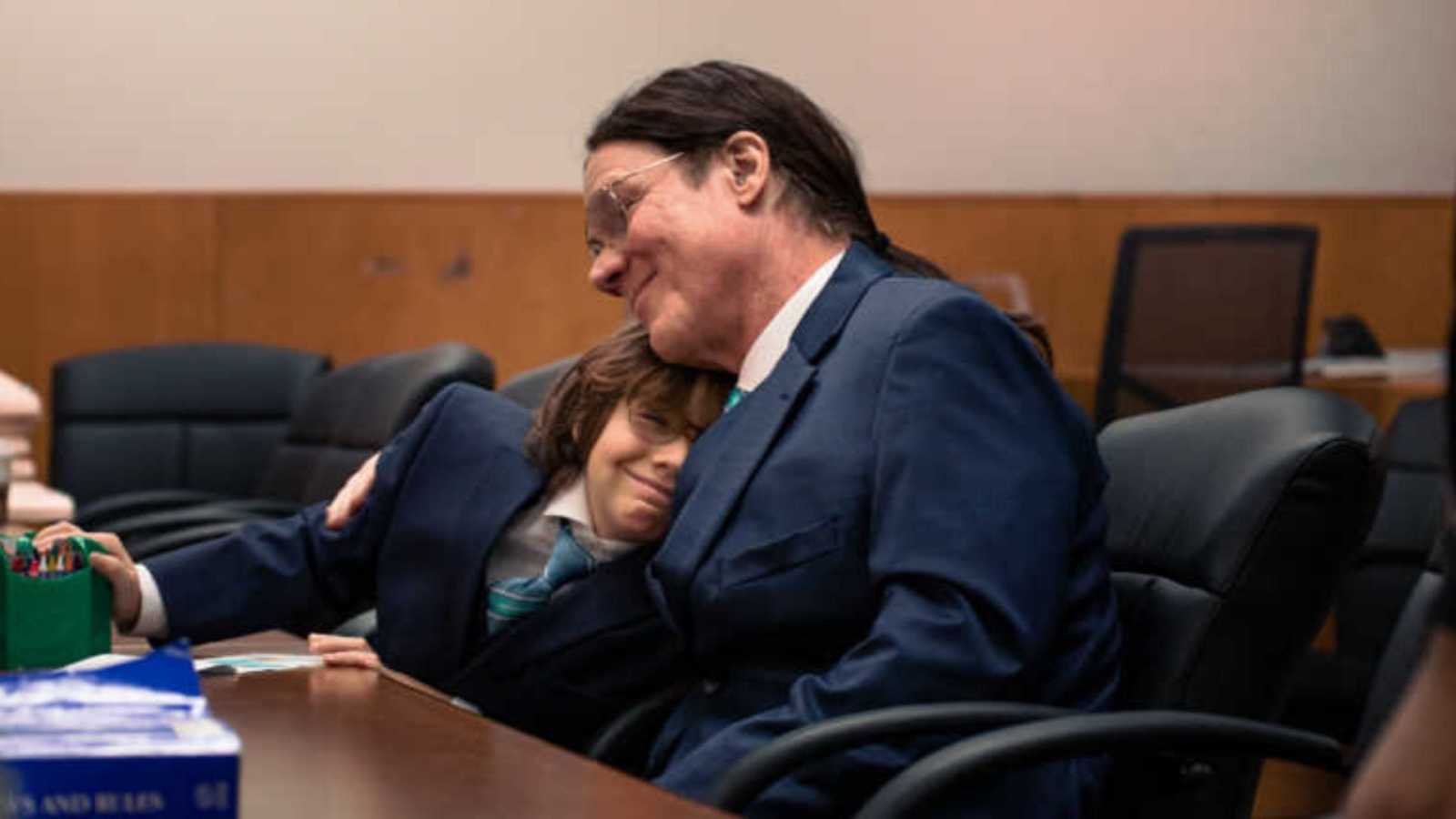 “‘I never asked for any of this!’ screams my sobbing eight-year-old foster son to his new therapist when he learns, despite being on an adoption track with me, he must endure more therapy and more ‘services,’ which he’d been forced to be part of since the age of four.

Those seven words rip through my heart as they encapsulate the entire foster care experience for all children in care – they don’t ask for any of it, but are forced to submit because of bad choices by their bio parents and the demands of a bureaucracy-laden system forced by government to provide services the child may not want or even need.

My journey as an adoptive parent begins in 2015 when I attend a Raise A Child event in Los Angeles to find out if, as a single man, I’m legally allowed to adopt, and am delighted to learn I’m eligible. I start classes at Penny Lane Centers—a foster family agency—and thus begins the biggest adventure of my life.

Ronald is eight when he enters my home – excited, happy, safe, and comfortable from the get-go. We’d skipped over many of the interim stages pre-adoptive parents and children go through because we were such a perfect match from the beginning. Our first meeting at his then-foster home lasts almost three hours, instead of the typical one, and Ronald wishes it could go on for another three. The very next day, when asked by his therapist about me, he replies, ‘It’s like we’re the same person!’ I felt the same.

Once he moves in, Ronald believes, since he’s now in an adoptive home, he’ll be free of the constraints of foster care, and more importantly, the adoption will finalize sooner, rather than later. It takes many weeks and numerous visits by his new team members before Ronald will even speak to them, hence the cry of anguish with which I opened this post.

He started out life in foster care and only lived with bio parents for a few short years prior to age five. The layers of trauma are thick, some abuse and tons of neglect. Thanks to the five different schools he’s attended before moving in with me, ‘math’ is a trigger word of tsunami proportions, resulting in meltdowns to this day. Thanks to a cruel, shortsighted foster parent who locked him in his room and forced him to write and rewrite standards for hours, writing by hand is another trigger area that lingers painfully in his mind and heart.

Ronald is now eleven and his adoption was finalized, at long last, in January. After such a lengthy wait, with numerous roadblocks thrown into our path by his bio mother and a court system that sadly, puts the wants of irresponsible adults above the needs of children, his dream of the past seven years finally came to fruition. He told me when we first met, ‘I’ve wanted to be adopted all the time I’ve been in foster care,’ and, in his excitement, he barely slept the night before that dream was to become a reality

On Adoption Day, I woke him early so we could get ready and make the hour-long drive to the courthouse. He sat up at once, grabbing me in a tight hug, gushing, ‘Today’s the day!’ I know him well enough to note the look on his face and a slight undertone to his voice – he’s been in the system too long to believe in the adoption until it occurs. We dressed in matching suits and ties and Ronald, like most young boys, complained about his tie being too tight, while also beaming at the reason for wearing it.

My sister and nephew were in town for the event and we were joined at the courthouse by my Little Brother mentee and his mother, and Rich Valenza (founder and CEO of Raise a Child), the adoptive-parent-recruitment agency that started me on my journey. There were three adoptions that day in the same court, so we cooled our heels in a downstairs hallway awaiting our turn. When finally called upstairs, we entered a quiet courtroom with the judge examining paperwork on his desk.

He didn’t acknowledge us but merely waited for our attorney to speak. This man has been an intimidating force in Ronald’s life since the age of four and has watched my son grow up in his courtroom over the years as he approved Ronald’s move from foster home to foster home. Not once did the judge speak to my son, congratulate him, try to put him at ease after all those terrifying court appearances in the past. As the judge read out the declaration Ronald and I are now a family, my son hugged me. I felt choked with emotion and he looked ready to cry with happiness.

The judge signed the paperwork and allowed us to pose for a photo behind the bench. I offered to shake his hand and indicate to Ronald to do the same. If a judge who works with children day in and day out can’t be upbeat on the happiest day of my son’s life, I will be upbeat for him. His clinical attitude bothered me, but Ronald said that’s how the man has always been. There are some people who should never work with children, and this judge is one of them.

Once we were out in the hallway heading for the exit, Ronald comments dryly, ‘Three years for five minutes,’ comparing his time in my adoptive home to the length of the actual adoption ceremony. But at least, I remind him, the court reporter grinned from ear to ear throughout those five minutes. We shrugged off the judge’s detached demeanor and exited to leave the courthouse as a family, happy and excited. On the way home, Ronald gushed, ‘This is the best day of my life!’

I squeezed his hand. ‘It’s the best day of mine, too.’

Several weeks later, we hosted a party to celebrate Ronald’s adoption. Neighbors, family, kids from theater companies Ronald is a part of, schoolmates and their parents arrive to delight in our happiness. Some of his foster care workers and two county social workers also join us to celebrate what, for them, is the reason they do what they do. They’ve been part of Ronald’s life long before I even met him, and on some level, the adoption means as much to them as it does to me.

Ronald, naturally, grew weary of everyone wanting to take a photo with him. I kept whispering in his ear, ‘You’re the star of the show.’ He wanted to play, and that anxiousness to get back to his friends solidifies in my mind what this adoption means to him. Yes, he now has the forever home he’s always dreamed of, but just as importantly, he has friends who can visit his forever home and play with him anytime which is something unusual for foster kids and unheard of for Ronald. He also has a best friend he can see on a regular basis who helps validate him in ways he’s never felt before. Knowing his best friend came to the party excited him more than anything else, and that boy was the first to arrive. Ronald happily showed his friend around our home, including his room, and there have been few times I’ve seen him more ebullient. He’s now a ‘regular’ kid for the first time ever.

As his other friends arrived, they play giant Jenga, darts, beanbag toss, and Nerf wars in the backyard. Hearing the laughter and good cheer coupled with smiling happy faces, pulled my heart tight in my chest with happiness. We had food and a huge cake, which he cut and dispensed to kids and adults alike. He opened presents and notes with amusement of how many people have given us photo frames with the word ‘family’ emblazoned on them. I reminded him today is a celebration of our family and he grinned broadly.

We have photos on display from the adoption, alongside a commemorative gift I gave him on Adoption Day: father-son bobbleheads depicting me as Batman and he as Robin, though I told him the ‘R’ on his chest is for Ronald. Written along the base are the words ‘Family is Forever.’ The artist custom-made these bobbleheads so the faces look exactly like ours and they will remain a fun reminder of the day we became an official family, even though he was my son from the moment he walked through my door and has never been treated as anything less.

Everyone who joined us on that day felt the significance of this celebration and none have ever attended an Adoption Party before. Despite the finalization having already occurred, this party made the reality so much stronger for Ronald. I suppose because we were proclaiming it to the whole world.

That evening, after family and friends left for home and it was just the two of us sitting together on the couch, Ronald prattled on about how much fun he had, exclaiming as he gripped me in a tight hug, ‘This is the second-best day of my life!’

Raise a Child has a motto: ‘Let Love Define Family,’ and it’s a saying with which Ronald and I wholeheartedly concur because love most certainly defines ours.”

This story was submitted to Love What Matters by Michael Bowler. Submit your own story here and be sure to subscribe to our free email newsletter for our best stories, and YouTube for our best videos.