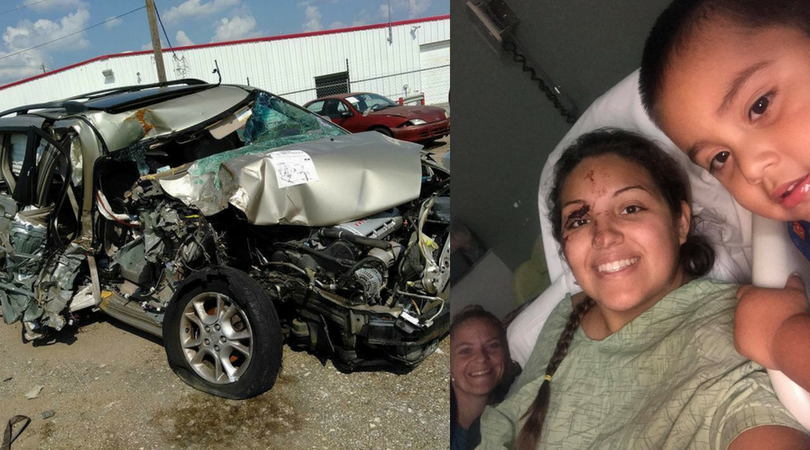 “On August 22, 2017, I was driving from my mom’s house in Porter, TX, back to my house in Willis, TX. I was driving my 2004 Toyota Sienna minivan, with my 19-year-old daughter, Kaylee, who was 17 weeks pregnant, in the passenger seat. My 3-year-old grandson, Adrian, was sitting behind my seat, in his Britax frontier car seat, properly restrained using the 5-point harness. Traffic on I-45 headed north, was not too bad, considering it was close to 5pm. I was in the far inside lane, with only the HOV lane between me and the concrete median, when the vehicle in front of me, slammed on their brakes. The vehicle was a large super duty truck, with a large bumper on the back. I knew in that split second, there was no way, I was going to have enough time to stop, without hitting them, so I swerved in to the HOV lane, in an attempt to avoid the inevitable. I ended up clipping their bumper, which caused my van to start spinning. The driver’s side clipped the concrete median, and continued to spin, before flipping us around, and eventually slamming into the concrete wall, on the passenger side, before finally coming to a stop. In the seconds after the van stopped, I had to quickly try to gather my bearings. I could hear my grandson crying behind me, yelling ‘YaYa, I falling!’

I turned around and could see he was scared, because his car seat was leaning towards the passenger side, but he was alert and crying, so I turned my attention to my daughter, Kaylee. She was unconscious, and I could see she was not okay. I wasn’t sure if she was even alive at that point, until I checked for a pulse and to see if she was breathing. I knew I needed to get out and get to her and Adrian, but my right leg was pinned in between the steering wheel and dash. After some maneuvering, I was able to free my leg, and get out. I went to Adrian’s door, and unbuckled him, and picked him up. He calmed down fairly quickly, so I carried him to the other side of the van, to check on Kaylee. The passenger door was completely gone, and the sliding door on the passenger side was so badly damaged, there was no way to get in it. Kaylee was starting to moan and try to move around, so I was talking to her, trying to keep her calm. I could see that Kaylee was pinned, with the dash literally sitting on top of her lap, all the way up to her little baby bump belly. My first thought was please God, let her and the baby both be okay. As I was trying to see how bad Kaylee was injured, several people started coming up to us, and trying to help.

Kaylee was bleeding a lot, and I was trying to figure out where all the blood was coming from. I could see she had an open femur fracture, because you could see her bone, pushing up through the skin on her thigh. She had blood dripping down her face, and there was blood coming through her shirt. There happened to be a towel in the back seat of the van, and a gentleman grabbed it for me, and I started applying pressure, as best as I could, while still holding Adrian. Finally, after what felt like an eternity, the police and EMT’s arrived on the scene. They took Adrian and I over to an ambulance to check us out, while they were working on stabilizing Kaylee, and try to figure out how they were going to get her out of the van. They realized quickly, they were going to have to use the jaws of life, in order to do that. They had to dispatch the fire department to the scene, but due to the wreck, traffic was at a complete standstill, and there was no way for the fire department to get to the north bound side of the freeway. Instead, they closed the south bound side of the freeway, and had the fire department go on the opposite side, just across the concrete median. It took the fire department roughly half an hour to remove Kaylee from the wreckage, and once she was removed, they took her by ambulance to Conroe Regional Medical Center, which was the closest level III trauma center, and Adrian and I rode in a separate ambulance to the same hospital.

Things moved quickly, once we arrived at the hospital. Kaylee had a whole team of doctors and nurses, in her room, assessing her injuries. The biggest concern was the open femur fracture, because of the amount of debris in an around the area, causing a huge risk for infection. The Doctor knew she would be going back to the operating room, so they needed to do an ultrasound, to check on the baby. As soon as the ultrasound started, we knew that the sweet baby, that we had just seen moving around, with a strong heartbeat, on ultrasound less than a week earlier, had not survived. The screen showed a perfectly formed, but perfectly still, precious baby, who we would never see grow up. We were devastated to say the least. Shortly after, my dad, and Kaylee’s boyfriend Franke showed up at the hospital, and we spent a few minutes trying to process everything that had happened, before Kaylee was taken in to surgery. After Kaylee left the ER, the doctor came to check me and Adrian.

I was bruised, with a few cuts and scrapes, and pretty sore, but otherwise fine. Adrian didn’t have a scratch on him, and other than two red marks across his chest, where the straps from his car seat went across the front of his body. The doctor was completely amazed that Adrian was uninjured, considering how bad Kaylee was hurt. He asked me what kind of vehicle we were in, and what kind of car seat Adrian was sitting in. The EMT’s, as well as the police officers, that brought us in, stepped in to our ER room, as I was talking to the doctor also. All of them wanted to hear what car seat Adrian was sitting in, because they all saw how bad the wreck was. I told them that I had bought him a new Britax Frontier, two months prior, because his last Britax was in a vehicle that was involved in a fender bender, and I was told I needed to replace it. Every one of them agreed, that his car seat, and the fact that he was properly restrained in it, is what kept him from being seriously injured or killed. I have heard many people say it doesn’t matter what brand car seat you use, as long as it is used properly, and that is true to some degree. The biggest difference with Britax car seats, is that they have a steel frame, and they are one of the only car seat manufacturers that offer that.

So much has happened since the accident, almost a year ago. Kaylee ended up delivering her stillborn the day after the accident. Andres Ezra Muniz-Vasquez, was perfectly formed, but so tiny. We had a small graveside service for him, after Kaylee recovered enough, to be released from the hospital, almost three weeks after the accident. She wasn’t able to walk for about 15 weeks, because she required metal rods in both of the bones in her leg. Her injuries were extensive, including the open femur fracture, tibia fracture, pelvic fracture, spinal fracture, and numerous cuts and injuries, that required a total of 152 staples throughout her body. It took Kaylee a long time to heal, and she has scars over much of her body, but she is now a walking, talking, miracle. She still has pain in her leg, and walking long distances makes it worse, but she is a fighter, and I am so proud of all of her hard work and progress. I went and bought Adrian another Britax car seat, this time, a Pinnacle. Things could have ended up so much worse, than they were. I will always be grateful that Adrian was kept safe that day and will continue to stay safe in his car seat.”

This story was submitted to Love What Matters by Holly Mosier Gray, of Texas. Submit your story here, and subscribe to our best love stories here.