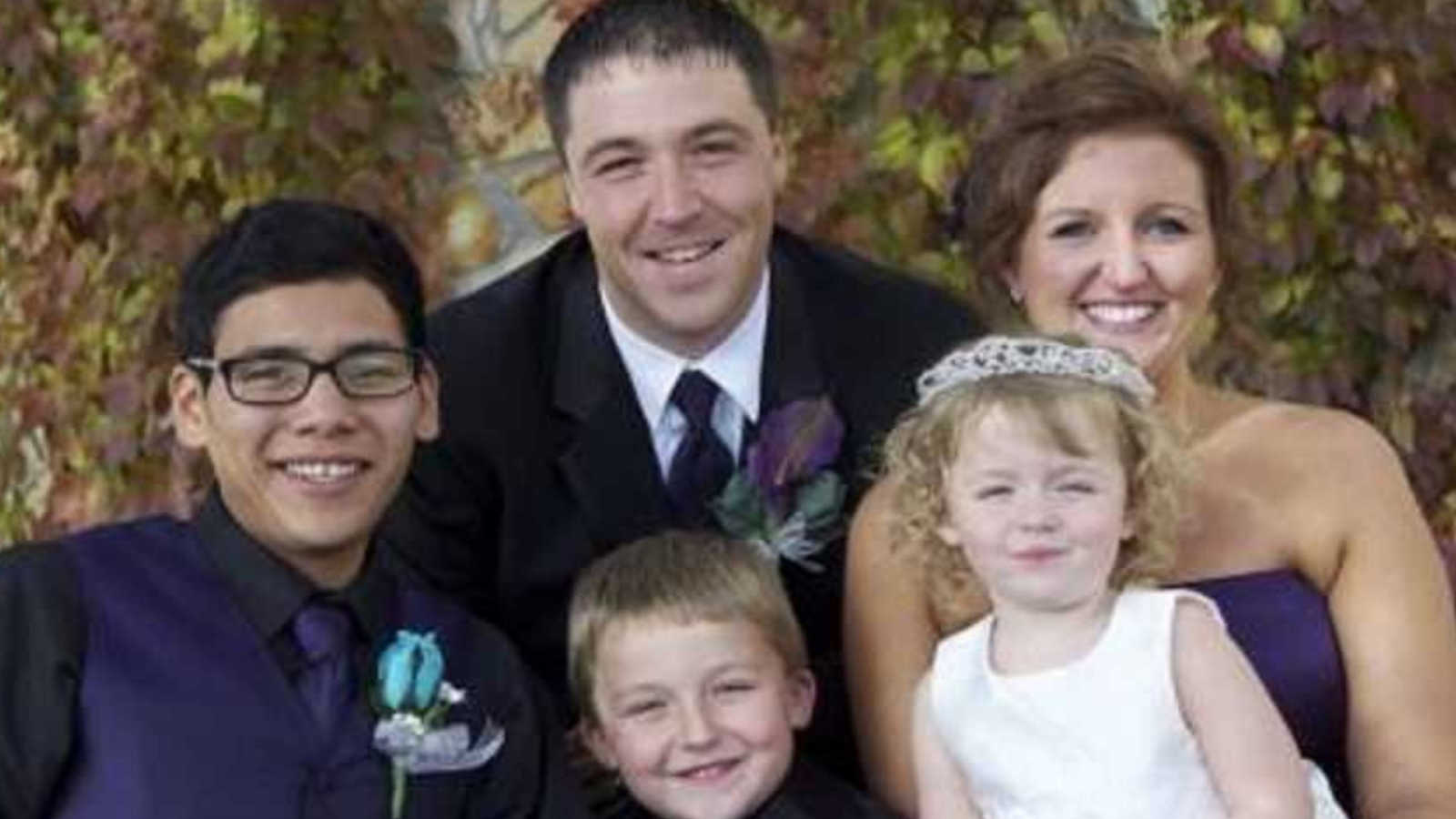 “Who do you belong to?,” asked the wedding photographer, to our 19-year-old foster son. He was wearing his tux, ready for his duty as usher at my sister’s wedding, and the photographer was trying to line up my parents and siblings for one big family photo. He just looked back at her. Someone who didn’t know him well might not have seen the very brief moment of insecurity that crossed his face, and then disappeared just as quickly. “He’s ours,” I said. His eyes met mine for just a second, he smiled, and she directed him into place with my husband, me, and our two young children. His smile is radiant in every one of the many pictures he was in that day.

Wynd has been a part of our family since he was 15. These have been hard fought years of relationship building and trust earning, and testing it all over and over again. We have gotten to know him over these years – first the surface version that he lets everyone see, and then much more slowly the incredible and complicated rest of him that is there. We’ve struggled along with him as he has battled his demons with addiction and held him while he cries over life challenges. We’ve embraced him in his moment of vulnerability when he asked if he could just plan to stay until he was 18…. And again when he asked if he could stay past 18. We have grown to love him. I have watched him love my two small children, whose whole lives he has been a part of, and think that maybe he loves them more fully than he’s ever loved anyone. What started as a placement of a boy into a foster home with people he didn’t know and didn’t get to choose, has become a home and family of a young man who elected to stay, long after he could have left. He became a part of our family by chance; he has stayed a part of it by choice.

Several times our foster care agency has sent out an email asking for success stories to be submitted by foster parents to assist with their recruitment effort.  I never felt quite confident enough to submit one, because I don’t yet know Wynd’s final chapters to know if this whole endeavor will be deemed “successful” or not. I’ve seen enough of the writing on the wall to know that it won’t be an easy walk for him through the life challenges that will come his way, but we have also committed ourselves to going alongside him so that he’s not making that walk alone.

And although there have certainly been challenges along the way, there has also been this highlight reel of moments that play through my head when I think back on the last few years; him sitting at our table sharing milk and cookies with our toddler son, making sure the bites were small enough for him and the careful way he tipped the cup so Tyler could get a sip of milk; my husband helping him tie his necktie before his first winter formal dance; his laughter while sitting around the table playing pinochle with family for hours; the look on his face when he water skis; the gentle way he held my daughter in the hospital the day she was born and the look of awe on his face while she was in his arms; helping him get dressed in his tux for prom; watching him walk across the stage at his graduation; all of the birthdays and holidays and other family celebrations he has been a part of during that time; and most recently, dancing the night away at my sister’s wedding after proudly escorting my mother down the aisle as an usher. These are the shining moments where I think I’ve seen him at his very best, and it gives me hope for the rest that are to come.

And perhaps the moment that stands out most to me among all of them was a day last winter when we were all snowed in. Wynd was playing superheroes with my son, who was in his Superman outfit.  Suddenly he disappeared to his bedroom, much to my son’s disappointment. I tried to explain to him that Wynd had played a long time and probably just needed a break. All of a sudden the door burst open and Wynd (or Batman) jumped through, with a black shirt and pants on, a blanket tied around his neck, and a bandanna with eyeholes cut out tied around his face. I looked at my son who seemed temporarily paralyzed with joy, and the huge smile on Wynd’s face. In that moment when I got to watch him love my son, I loved him so much it seemed I could feel my heart swell just a bit, and I couldn’t help but be thankful for all of the moments, good and bad, hard and easy, humbling and fulfilling, that led up to this point to make that moment possible.

The hardest question that I often get from people when they learn we are foster parents is, “Aren’t you worried about the effects it will have on your own children?” I think this one bothers me the most because, as ashamed as I feel about it, somewhere deep down I DO worry about that sometimes. This summer my 4-year-old son and I were reading a book he had picked out from the library, about a panda bear in a zoo that couldn’t have a baby when all of the other animals were. The panda ended up getting an egg from the zookeeper that needed to be hatched, and became a mother to a penguin. When we finished the story my son said, “That’s kind of like our family, right mom? Because even though you aren’t Wynd’s mom, he’s still my brother, right?” My eyes welled with tears because if my children are going to take anything away from the experience of being a foster family, I couldn’t be happier about it being that message: that family is about love, not just matching genetics. Being Wynd’s foster mom has been one of my life’s greatest challenges so far, but far outweighing that is the incredible blessing it has been.

So like I said at the beginning, I don’t know yet know how this story ends and I am not quite bold enough to promise a happy ending. That won’t stop me from hoping for one.  But maybe for now it’s enough to call it a success that my family gets one more person to love, and when the world finds ways to ask him, “Where do you belong?,” he knows the answer is with us.

This story was submitted to Love What Matters by Katie Krukenberg of Bismarck, North Dakota. Do you have a compelling foster care story? We’d love to hear from you. Submit your story here, and subscribe to our best stories in our free newsletter here.