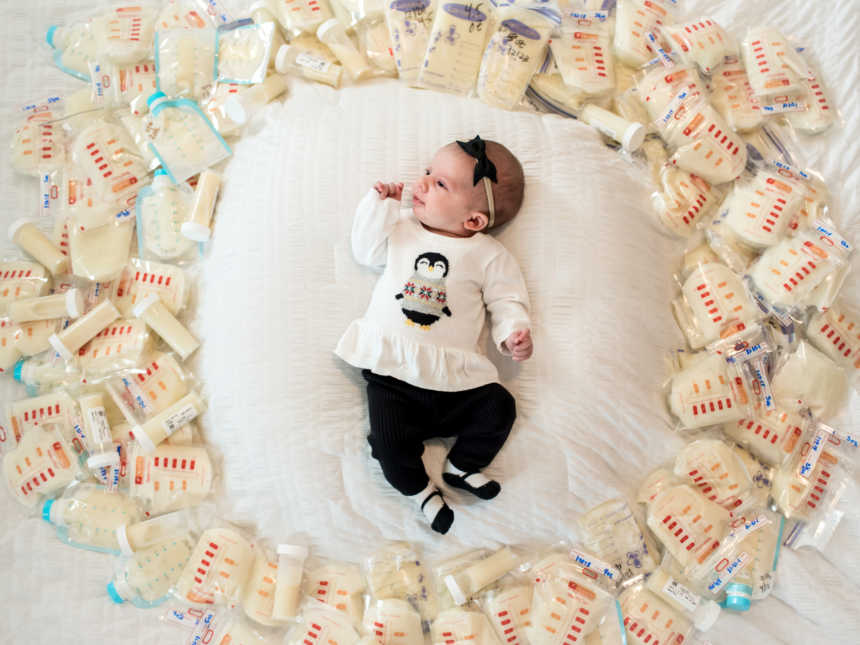 “At 25 weeks pregnant my baby was diagnosed as having intrauterine growth restriction (IUGR). My husband, Hal, and I were given a very bleak outlook. We had been warned that our baby, Everly, may ‘expire’ in my womb or may not survive childbirth. If she didn’t weigh a minimum of 500 grams (a little over 1-pound) she wouldn’t be able to be intubated and wouldn’t be ‘viable.’ By the grace of God, we made it into the third trimester and delivered at 31 weeks 3 days.

Everly Jade was born via C-section weighing 570 grams (1-pound, 4 ounces) on January 3, 2018. She literally came into this world kicking, which was a miracle in itself with her small size. The first three days went fairly easily in the NICU. She had graduated from the ventilator to a CPAP machine to a nasal cannula. 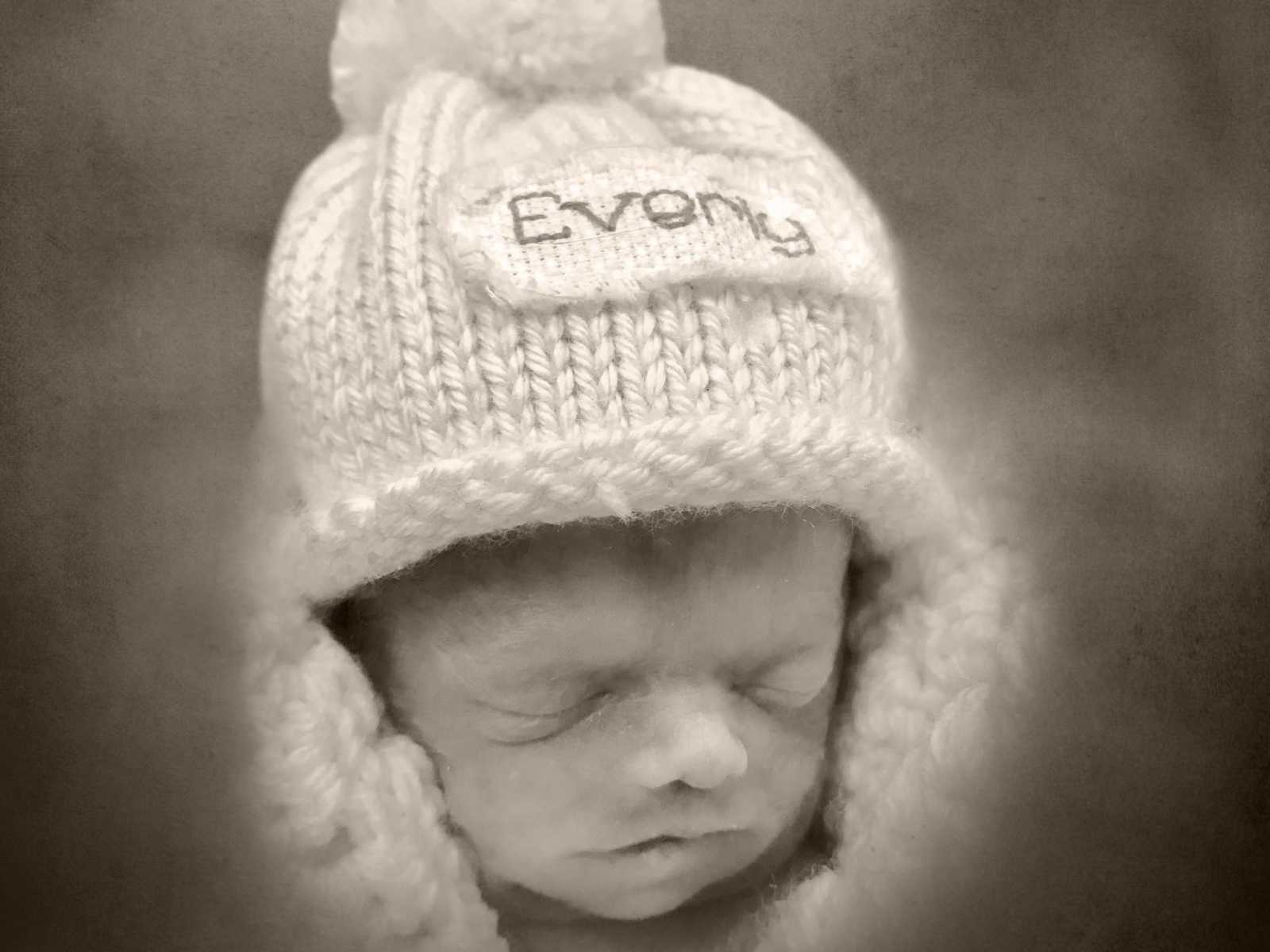 Hal and I had gone home to get some rest while we left my dad on Everly duty. We got the call around 2 a.m. that we needed to come back. Before we arrived, Everly’s heart rate had dipped into the 60’s (normal heart rate for a newborn is 120-170), her oxygen wasn’t even able to be registered and her blood pressure showed nothing. Right before Hal and I walked into the room, her heart rate was back in the 150’s and her oxygen was at 100 percent. My dad had led everyone in the room, doctors and nurses included, in prayer over Everly. Her vitals shot back up to normal. We were able to have a few more moments with our feisty Everly. But those moments were short lived and her tiny body failed. She fought the good fight, and showed the entire room a miracle by means of her vitals and divine intervention.

The thing about a mother in mourning is her body has no idea she is mourning. My body still produced milk, even though I had no baby to feed. I asked my doula what would be done with all the pumped milk I had stashed for Everly in the refrigerator of the NICU. The thought of it going in the trash killed me, as I had worked so hard to produce for my baby.

My doula told me I could donate it. She also told me of a mom in need of milk for her sweet newborn with respiratory syncytial virus (RSV). Dianne was the mom mentioned to me, and her supply wasn’t able to keep up with Merrytt’s appetite.

They were able to even feed Merrytt my colostrum, which is very beneficial for a sick baby. I found out we actually attended the same church, however we hadn’t even crossed paths. We were first introduced in a group text message and our friendship began. That following Monday, I took her what milk I had been freezing since I had been home.

I met Merrytt and was even able to give her a bottle! Watching Merrytt grow has been so good for my grieving. Seeing her thrive and grow bigger makes me feel like I have a purpose. While grief donating isn’t ideal for everyone, it has helped me tremendously. Dianne is so sweet to send me pictures and updates on Merrytt and show me the fruits of my labor. I’ve always heard it takes a village to raise a child. I’m ok with being the village milk cow.”

Merrytt was born on December 6 a few weeks before her due date. Because of her gestational age at birth, she had latch issues that made nursing complicated from the start. I tried my best and thought I was doing everything I was supposed to do when it came to nursing her. Three weeks passed and she didn’t seem to be gaining much weight and nursing was making life miserable. Finally, the day after Christmas, I called a lactation specialist to come visit because I knew something wasn’t right. Turns out my mama instinct was right. Although she would nurse for HOURS, she wasn’t actually getting what she needed. She wasn’t failing to thrive, but she was close. I felt defeated.

At the suggestion of the specialist, we began triple feeding and supplementing with formula as needed. Triple feeding isn’t sustainable and I wore out quickly. Merrytt was gaining but I was exhausted. On top of that, we noticed she didn’t tolerate the formula like she did the breast milk, so I was trying my best to pump more milk. I began supplements, power pumping, drinking water like crazy, eating oatmeal and lactation cookies, you name it, I’m doing it, but no change. A week later after finally getting feeding on track, we both came down with thrush that made nursing so uncomfortable for me. We finally got meds for both of us and began treatment when Merrytt came down with respiratory syncytial virus (RSV). RSV in a 4-week-old is one of the scariest things as a mama I have experienced. Once she became ill with RSV, she started refusing to nurse. I had hit my limit and felt defeated again. I remember being in the shower that night and praying to God to please help me and let me make everything better. A couple days later I got a phone call from a dear friend of mine saying, ‘Jenny Rogers wants to give you her breast milk.’ I was in shock and trying to place where I had heard Jenny’s name and then it hit me. I had not been on Facebook much since I was dealing with all my issues and a sick baby but had remembered Jenny’s name from a couple posts and a couple of my friends had shared part of Everly’s story. At that point I didn’t know Everly had passed, so my friend filled me in. My eyes filled with tears and I couldn’t believe I was being answered a prayer in the midst of a heartache. Our doula brought over the first bag of milk that included several syringes of colostrum. Remembering all the nutrients and benefits of colostrum, I thought I would see if it could do anything to help in Merrytt’s RSV. I made her a bottle of just colostrum and then started mixing it in her bottles with breast milk and immediately started seeing an improvement. I’m not a doctor but I really believe it helped.

My friend introduced us via text and like Jenny said, it went from there. I feel like Jenny is part of my family and I’ve known her for years even though we just met. Jenny’s selfless act has not only helped Merrytt, but it’s made me want to be a better person and be a better mama. I am still pumping and giving Merrytt what I can but am still relying on Jenny’s donor milk to make a full bottle. Without her we wouldn’t have a full belly or full hearts.”

This loving story was submitted to Love What Matters by Jenny Rogers, 34, and Dianne Burnett, 33, of Lubbock, Texas. Submit your story here.

Do you know someone who could draw strength from this story? Please SHARE this powerful story on Facebook to show others a community of support is available.