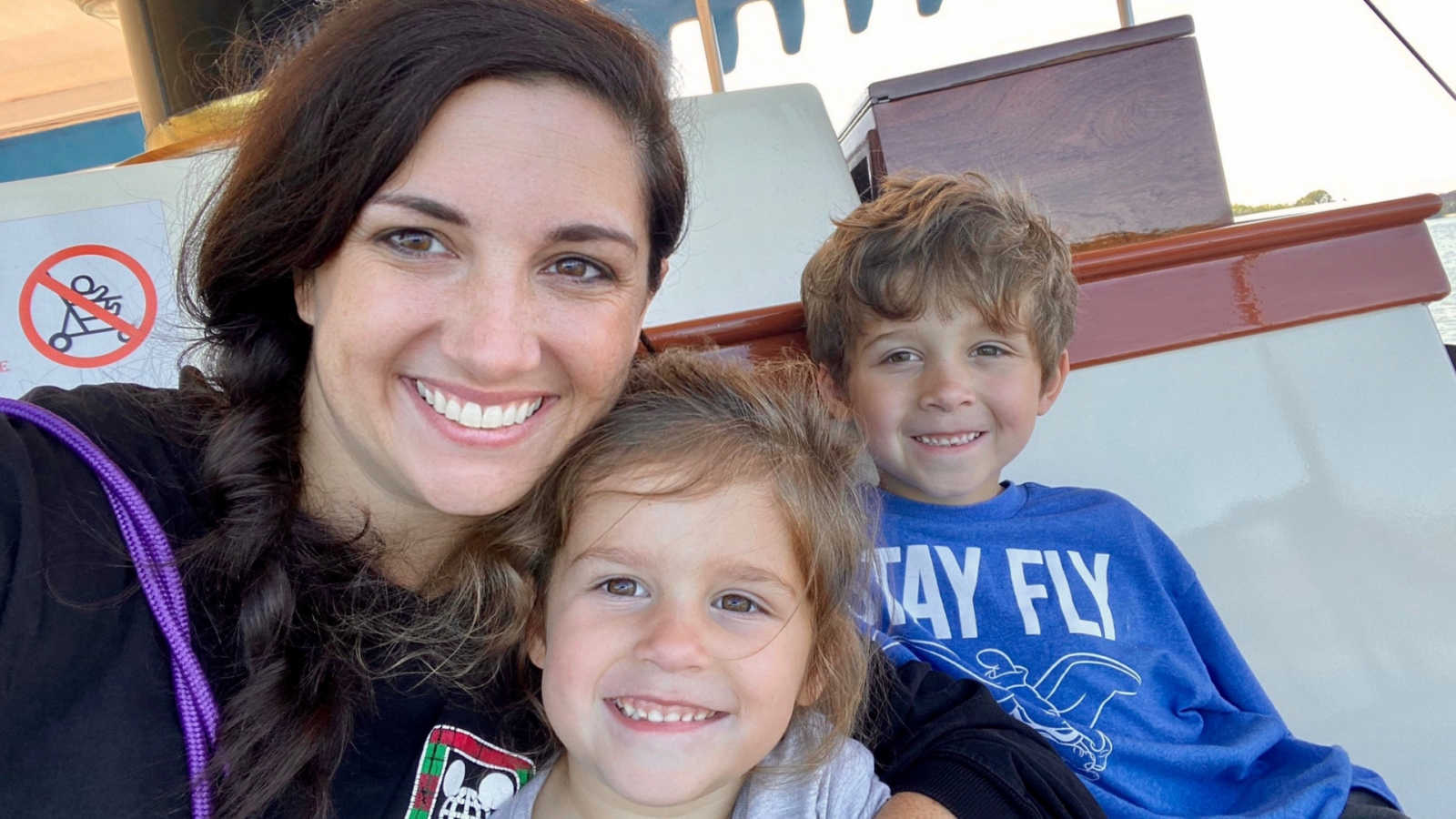 “I spent three days with my kids at Disney this weekend, flying solo as a parent, and it was absolutely amazing.

Oh, there were melt downs. Plenty. And we returned home exhausted and full of garbage, sugary food. But it was amazing.

I have a million memories to share with y’all, but I want to start with something I experienced while waiting to eat lunch with Winnie the Pooh and friends.

To say my kids were excited would be an understatement. They were practically bouncing off the walls. So, I recommended that they hop-hop-hop up and down the entrance ramp for a few minutes while we waited for our name to be called. I sat on the top stair and watched them giggle and hop for a solid five minutes.

You could power an entire city with a child’s energy. It’s impressive, actually.

After a minute or so, a few kids from the porch joined in. (It feels important to add that there were very few around this area, and I made sure that no accessibility was being blocked).

One little boy in particular was giggling so loudly I thought he might pee his pants. He and my son were hopping on one another’s shadow in some game they created in their beautiful imaginations.

Then, his father walked up to the ramp and yelled his name. It surprised me because it was entirely unnecessary to yell. The kid was legitimately four feet away. This was all for dramatic effect, and it worked.

‘Cade, get your butt over here! HOW OLD ARE YOU?!’

My son and daughter froze in place, as well. Pretty sure they thought they were in trouble, also. I didn’t know quite how to respond, but I waited a second for everything to play out.

The boy lowered his head and started walking up the ramp.

‘I said HOW OLD ARE YOU?’ The man yelled again.

‘Five,’ the boy mumbled in response as he walked up to his father. His dad grabbed his arm, squeezed it hard, and looked into his face.

Outside a restaurant where human beings dress in fluffy costumes of popular cartoon characters.

Ben fidgeted for a second before asking me if he needed to stop hopping. Because, you know, he is six years old.

‘No, son. You are acting EXACTLY your age. Have fun.’

He hopped a few more times with his little sister, then decided to sit next to me until our names were called.

I was livid. And I’m not here to parent shame. Because we all have our moments, don’t we?

I know I do. ESPECIALLY at Disney.

But I want to take a second to remind all of us that, HEY: kids are freaking kids.

If you let them, they’ll reintroduce you to the wonder of life. To the sheer joy of physical movement and silly fart jokes. They’ll show you how simple it is to make new friends and IMMEDIATELY include those friends in your fun.

We say we want them to ‘act their age’, but do we remember what ‘that age’ actually feels like?

I do. It was freaking magical.

So, God forbid we snuff the fire out of our joyful, giggling, little sidewalk hoppers. That’s the last thing I would ever want to do.

I would be devastated to know that I was responsible for extinguishing the magic that exists in my children’s imagination.

The world will get to them soon enough.

What a hypocrite I would be to demand adult behavior from a little child, when half the time I hate being an adult, myself.

Listen up, world. If kids aren’t hurting anyone, let them act their age.

Let them be silly and take up space.

Let them wave their arms and move their anxious legs.

Let them fill the room with all of their kinetic energy.

And if anyone dares try to shame them for acting little, when they ARE, IN FACT, LITTLE

You tell that adult to step off it. Those little sidewalk hoppers aren’t hurting a fly.

They are acting EXACTLY their age.

And they are only going to be little for so long.”

‘Some children are just born feral. If a know-it-all wants to tell you otherwise, go find them a drunk and hungry hyena. Shove it into some Doc McStuffins pull-ups and drop it off at their house.’

‘Mommy, why do you put on that makeup?’ Every day, I lie to my daughter.’: Mom avoids telling young daughter ‘real reasons’ for insecurities, ‘I won’t bring her down with my ugly truth’