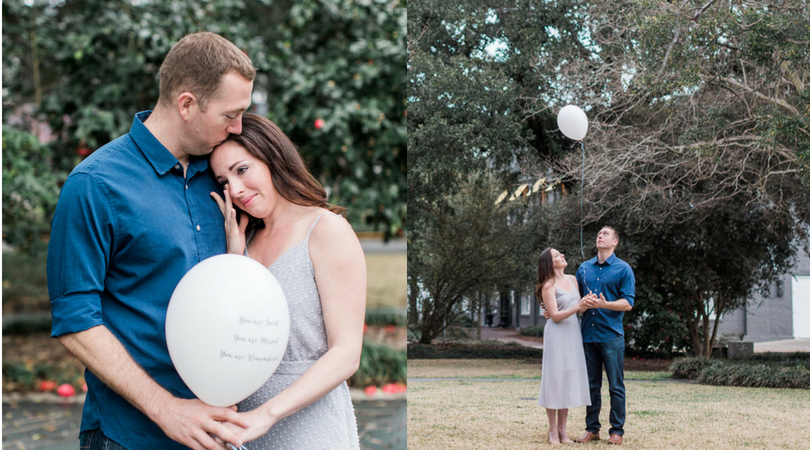 “I’m Ansley and I’m 33-years-old, residing in Orlando Florida. My husband, DJ is 35, and we met in 2012 when he was in Orlando completing a specialty school for the Army. His friend met a girl I worked with at Disney; I’m a performer in Finding Nemo the Musical. We decided to meet up, a group of his friends and a group of my friends at Epcot and just have a fun evening at the park. We didn’t entirely hit it off, but after a few weeks of him pursuing me, I finally decided to go out on a date with him.

A few months later he ended up moving to Fayetteville, North Carolina for the Army and we decided to continue our relationship long distance. He proposed to me in December of 2013 on a preplanned trip to London and Paris. He surprised me with a beautiful engagement session in Paris.

We married November 8, 2014 in my hometown of Atlanta, Ga. It was a beautiful ceremony and we could not have asked for a more perfect day. Unfortunately, our newlywed bliss was cut short as my husband was sent on deployment. When he came home in April of 2015 he then informed me he was going on another deployment in Africa.

So our first year of marriage was completed with my husband being out of the country. When he returned home in 2016 we finally went on our honeymoon to Australia and New Zealand. It was one of the best vacations I could have ever imagined. We talked a lot about when we wanted to start a family and we decided we wanted to spend time together as husband and wife before having kids. But I was getting baby fever and so in August of 2016 we started trying for a family.

After 3 months of trying, I finally got a positive pregnancy test on October 31 and my due date was to be July 4. I was so proud of this due date because with my husband being a Captain in the Army I thought a little patriotic baby would fill out our military family perfectly. A week later my husband got a call to do a project, 3 months in Atlanta and 9 months in New York so it looked as though we were going to have our little bundle of joy in New York City. In December of 2016 I had my first doctor appointment where the doctor said she saw something extra in the amniotic sac, but wasn’t sure. We were sent to a specialist to have another scan and we were told everything was fine. After that we packed up our home in Orlando and moved in with my parents for our 3 month stay in Atlanta before moving to New York.

I had my 14-week doctor appointment in January where I was assured everything was fine and we had our blood test done to find out the sex of the baby. While in Atlanta I started to become sort of a nanny for my nephews and help pick them up from school and take them to the park. I was enjoying spending time with my family before our big move to New York. We even had a family gender reveal party where we found out we would be having a little boy. The 4th grandson on my side of the family! We shared our news on Facebook and Instagram and it was all starting to become so real. I was starting to feel him kick and move inside me, DJ and I started picking out boy names we liked and I had started planning a nursery.

The morning of our 18 week appointment was when things went from good to bad. We went in for a normal ultrasound and in these moments my husband likes to ask a lot of questions, but I could tell something was off. The nurse quickly left the room and got our doctor. She explained to us that we needed a more thorough scan and we needed to make an appointment with their specialist team as soon as possible. They fit us in for an appointment the following afternoon and let me tell you those 24 hours were the longest ever. My wonderful husband, always the optimist, was convinced it was just something that could be taken care of once the baby was born and he was going to be just fine. I didn’t know what to think. I remember that doctors appointment so clearly. My husband, again asking all the questions, and me telling him to stop because I saw what he didn’t see. The missing skull. That was my first clue something was terribly wrong. Once the specialist came in he showed us the kidneys that were 20 times larger than they were supposed to be, the missing skull and the brain leaking into the amniotic sac. We had lost our baby to a rare and fatal Genetic Disorder called Meckel Gruber Syndrome. Since we had gone public with the announcement and the gender I felt that I needed to share our loss on Facebook so that our friends who had known we were pregnant knew we had lost our little man.

We moved to New York the day after my 32nd birthday and I was crushed. From the moment we got there I felt like I was leaving a piece of my heart behind in Atlanta. I was severely depressed for the first few weeks because I had no friends, no job and really nothing to do while my husband was at work all day. I started taking online photography courses and pretty much would watch editing videos all day long. My husband and I would go out on the weekends and I would take my camera and we would explore the city and I would shoot as much as I could. I honestly think photography saved me from falling into a deeper hole that I was already struggling to get out of. My husband came up with the idea to share my story on youtube, since I was already open about our loss, he thought it would be a good way to share my story and grieve. So I started a youtube channel on our loss and on trying to conceive again.

I do a monthly video where we are trying to conceive and how I’m feeling after the traumatic loss of our first baby and it actually helped me. I didn’t realize how many women suffer from pregnancy loss in silence. Even women I work with and I had no idea of because as a society we are taught not to talk about the bad. I was heartbroken to learn how some women had no support system, and I wanted to be that for them. I started sharing my journey on instagram as well and even more women reached out to thank me and wish me luck. I have kept in touch with women who have also gone through Meckel Gruber and feel so alone. I am so lucky to have an amazing support system through the women I work with at Disney and Universal and I wanted to make sure that no woman going through loss would have to feel alone during the heart wrenching time of miscarriage, pregnancy loss, and or infertility. 1 in 4 women suffer from miscarriage and/or pregnancy loss and 1 in 8 suffer from infertility. It’s impossible that you don’t know someone who has gone through it. It makes me so angry when people ask women, ‘so when are you going to start having kids’ because they may have been trying for years but don’t talk about it.

On February 11, 2017 a year after our loss, we decided to do a memorial for our little man. I was in Savannah visiting my husband so I contacted photographer Wendy from Apt B photography. I know its maybe a little weird to photograph a memorial but our marriage has lasted 2 deployments, a pregnancy loss and infertility and we know marriage isn’t just about the happy wedding photos and Christmas pictures it’s about the hard stuff in-between and how you come out of it on the other end. We wanted to remember our son and all the love we had for him and his 20 weeks.

Our IVF journey started in January when we moved back to Orlando. We decided on Center for Reproductive medicine in Orlando and they have been so amazing. Our journey is a little longer than we thought as we have to go through PGD testing to have our embryos tested for Meckel Gruber Syndrome. I was pretty against IVF because I hate shots and needles but I’m very proud of myself for doing it. I gave myself my shots every morning and every night and I worked as much as I could right up until egg retrieval. I’m not going to say it wasn’t difficult because it was, but when we have a healthy baby in our arms it will be a distant memory.  We ended up retrieving 17 eggs, 10 fertilized and 5 made it to embryo stage. We are now awaiting our PGD results. If everything goes as planned we should be implanting in the fall. I realized that as I walk into stores that have baby clothes I no longer get sad about it, I find myself looking forward to the day where I get to dress my own rainbow/ miracle baby in those clothes. I’m open about our pregnancy loss and IVF journey so that anyone who feels scared to share knows that they are not alone.  I know there are so many women who have gone through much worse but we all share the same hope that our beautiful babies will be in our arms soon.”

This story was submitted to Love What Matters by Ansley Van Epps, 33, of Orlando, FL. You can follow her family’s  journey on Instagram here  and Youtube here. Submit your own story here, and subscribe to our best stories in our free newsletter here. 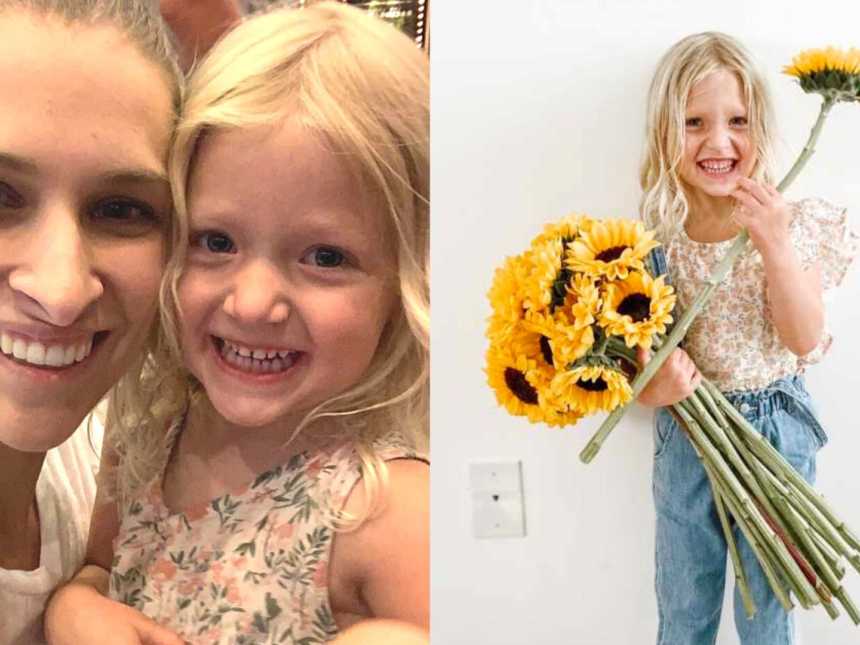 ‘Rico called me nasty!’ She’s only FOUR. I remember that exact moment. I remember trying to be small, to disappear.’: Mom helps daughter through bullying, ‘I’m changing the narrative for her’ 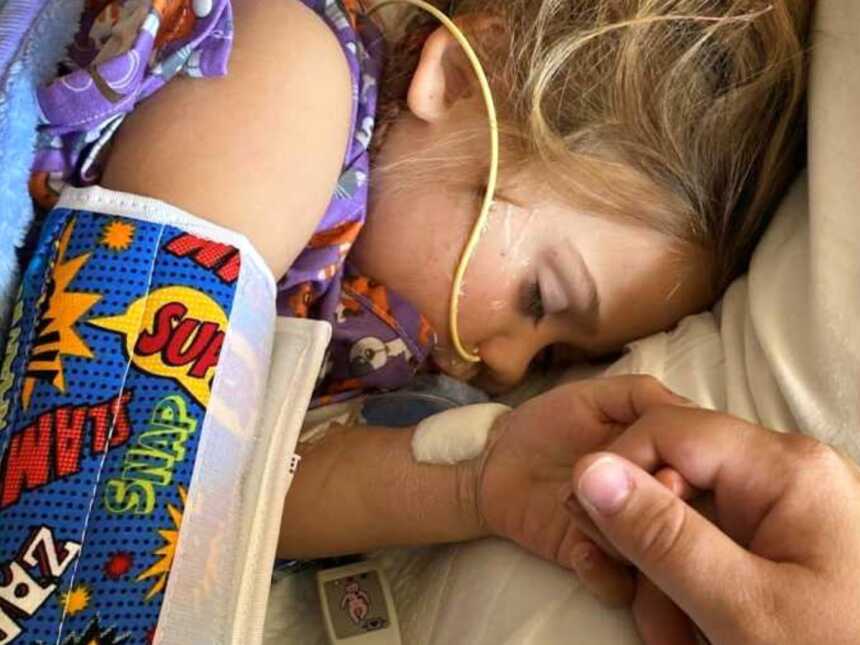 ‘Charlie strangely complained of headaches and started vomiting randomly at 6 a.m. with no other symptoms.’: Mom of 3 shares candid reality of childhood cancer after daughter’s diagnosis

“I was about 36 weeks pregnant, bringing another life earth side while fighting for my other child’s life.”