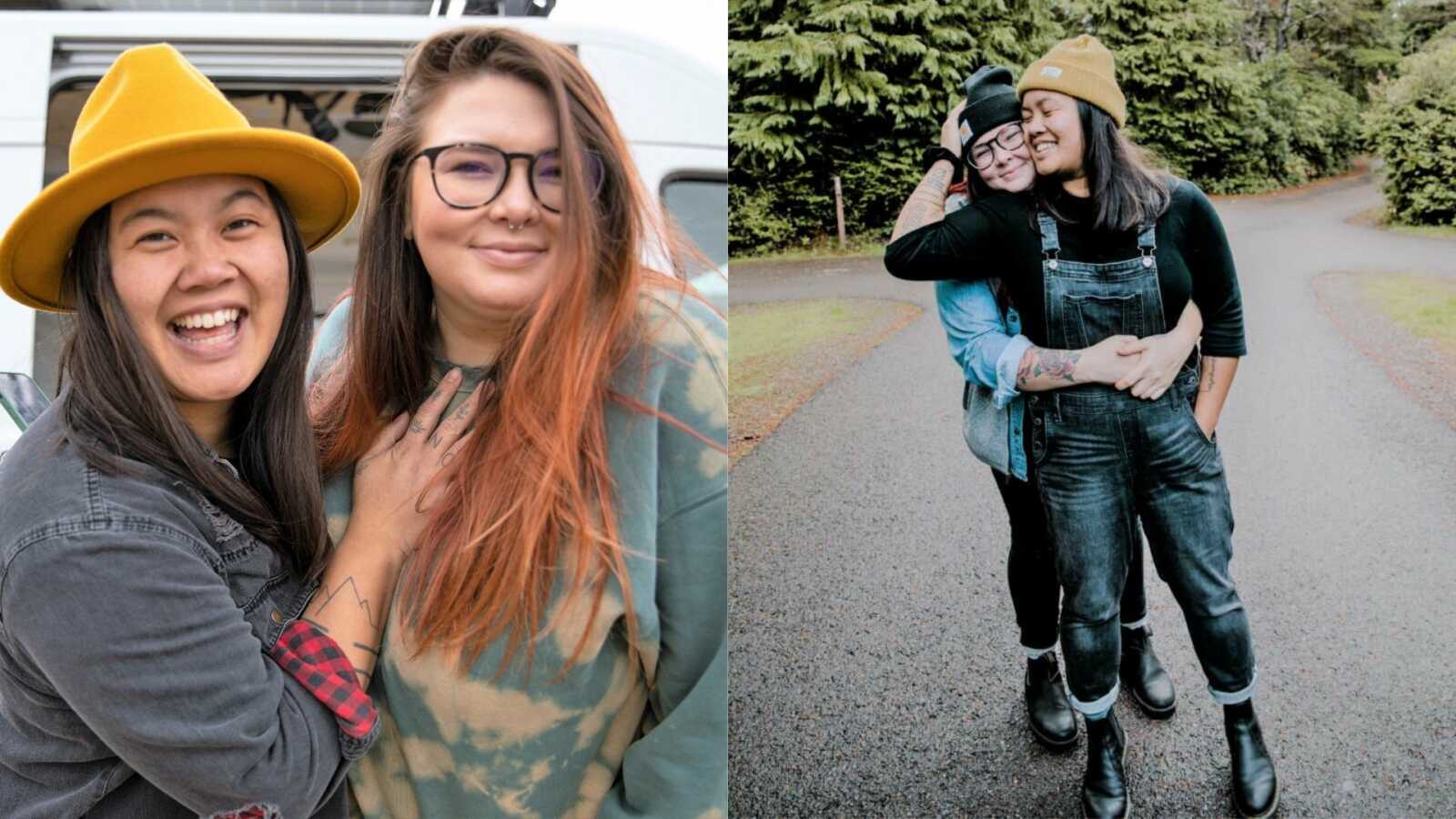 ‘I picked up a puppy from the pound and left my abusive marriage. Then I drove to a campground and fell in love.’: LGBT couple share sweet love story

“I knew immediately I had never met anyone like Megan, and this was it. This was the person I didn’t believe existed.”

Hey, it’s Ciara. In July of 2021, I quit the corporate world and became part of the great resignation! I sold, donated, and gave away almost everything I owned and chased the urge to be in the Pacific Northwest. In August, I had moved into my new home on wheels named August—a camper van! My ultimate dream. On September 1st, I drove West. On September 27th, I pulled into a campground in Florence, where I was going to be a camp host. I’d never been a camp host before, but I felt a strong sense to say YES and just be there. I had to be in Florence.

So, I did it. I got my camper van, I quit my job, and I live on the Oregon Coast…for free! I hadn’t met any van lifers or any other people in Florence besides the other camp hosts. Until two days later. I remember this exact moment as if it was today. I was in my van when I looked up and saw a white van drive by. A girl wearing a dark headband, glasses, and a t-shirt drove by in a…camper van! I thought, ‘OMG. A VAN LIFER, AND IT’S A GIRL!’

The next day, I saw she was staying at the park. I was determined to say hello. After a couple of waves and failed attempts to say hi (anxiety is real, y’all), I finally decided I would walk to her campsite and introduce myself. As I was rehearsing exactly what I was going to say, she appeared around the bend walking her dog. I had actually let myself walk a few steps away before I turned around and said, ‘Hey! Are you the girl in the van? I’m Ciara.’ She and her dog stopped turned to look at me, and she smiled and said, ‘Yah.’

Megan here. By 2021, my wife and I had been living in our camper van for 2 years. We didn’t live the van life I had envisioned as we had spent most of our time in cities. In May, I chose myself and left. My marriage had been incredibly abusive and it was time for me to finally choose myself. So, I picked up a puppy from the pound and saw a new opportunity for myself. We had agreed to stay in contact to see if things would ‘change.’

I moved to Oregon and was thriving – my van, dog, and I. We would spend weekends in the woods and weeks at the beach. We enjoyed several walks on the beach a day, just the two of us. My wife at the time was still in the picture and we talked often, but I was seeing I could thrive without her. One day in late September, I felt a pull to a campground. I drove through it and fell in love.

While I was driving, I saw a girl walking and she was stunning. I could tell there was something special about her. I never paid for campsites, but I hadn’t showered in about 2 weeks, and baths in my sink were just not doing the job. Unfortunately, I didn’t have the cash to pay for a site, so I stayed at a nearby casino. I found $10 in my van that night at the casino. I’m not a fan of gambling, but I felt the pull to give it a try. So, I took that $10 in and turned it into $120. I cashed it out. I bought myself a burger and saved the rest to stay at the campground the next night.

After I checked into my campsite the next night, I took Chaco for a walk to explore and we walked past the girl I had seen the day before. She asked if I was the girl in the van. I turned around and debated on if I should say yes or not. My gut said it would be okay, so I said yes. I felt such a strong pull to her. We chatted briefly and she invited me to come check out her van sometime. I walked over to her site no less than 4 times that day, and every single time her door was closed.

I didn’t know if I should knock, so I would just go back to my van and try again later. I called my wife and I told her I had met someone who I felt a pull to, and I was sure we would be friends. She jokingly asked if she should be worried, and I told her no. The next day, I wrote a note and planned to stick it to the side of her van with my phone and campsite number on it. She was sitting outside as I walked up. I didn’t know what to do, so I gave her the note. I know it made it more awkward than necessary.

As an introvert, I have never tried so hard to be someone’s friend. She showed me her van and said she would stop by mine later. We ended up having a campfire that night. I learned more about her and realized there were healthy people out there who had goals similar to mine. Goals I had to sacrifice for the relationship I was in at the time. She was kind, fun, smart, and gorgeous. I went to bed knowing I didn’t want Dani in my life at all anymore.

I was tired of the abuse, being yelled at, told I wasn’t enough and I had ruined her life in multiple ways including by doing Van life. I told her I needed to talk to her on the phone. I told her I was done trying, I could see it wasn’t my fault it was this way, I was doing more work than I needed to by being in therapy and working on myself when she was refusing to do anything. As I’m sure you can imagine, she was mad about it and wouldn’t leave me alone, but I stuck to it.

I told Ciara that night. Over the span of a few weeks, I fell in love with her. Part of me felt terrible I was fresh in the process of a divorce and falling in love with her, but another part of me knew she was ready to be there with me. We weren’t planning on moving in together. In a phone call with my ex, we agreed I would keep the van since she wanted nothing to do with Van life, and I would continue to pay for it on my own like I had been for almost a year.

A few weeks later, she ripped the rug from under my feet when she told me she would be calling the police and telling them I had stolen it if I didn’t give it to her. I panicked. I had just gotten news I was losing my biggest client, meaning I would be bringing in about $400 a month. Half of my payment for the van, and not even enough to feed me and my dog. I didn’t know what to do. Ciara told me I needed to make her an option. She wanted me to live with her, and to share her space with not only me but also my puppy.

So, after some arguing with her, I did. We made it work, and it was healing. We adjusted to life together faster than we might have any other way. I wouldn’t trade it now. I really miss my van, and I hope to get another one in the future. But I have someone who loves me harder than I have ever been loved before. She shows me I am not hard to love. She has patience and my soul has found peace.

It’s me, Ciara, again. She was married and I respected that. I couldn’t figure out why I wanted to be around her so much, but I did everything I could to spend time with Megan. When I found out she was single, the feelings I had fought back all came rushing through. Funny though, we actually tried to be ‘just friends.’ I fell in love with everything she is. I knew immediately I had never met anyone like Megan and this was it. This was the person I didn’t believe existed. The love we have is easy, and the love we have is worth every hard moment. This is our story.”

This story was submitted to  Love What Matters  by Ciara Ladroma and Megan Hogate. You can follow their journey on  Instagram. Submit your own story  here, and be sure to  subscribe to our free email newsletter for our best stories, and  YouTube for our best videos.

‘We’ve been robbed. All our stuff is gone.’ This only cemented it for us. Material possessions AREN’T important.’: Couple ‘hit the road’ in van, ‘It’s been the ride of a lifetime’

‘We sold our home and belongings. We were given orders to stay at home, except unlike many, home for us is a hotel room.’: Traveling family thanks hospitality workers, ‘No matter what, they take it in stride’

‘Not all women want to have kids, or buy a house and ‘settle down.’: Woman ditches job, starts solo travel movement

‘You need to go. Be out in nature.’ She took her last breath and vanished into the air. I’ll never forget those words.’: Man’s soulmate dies of cancer, travels the country with her ashes