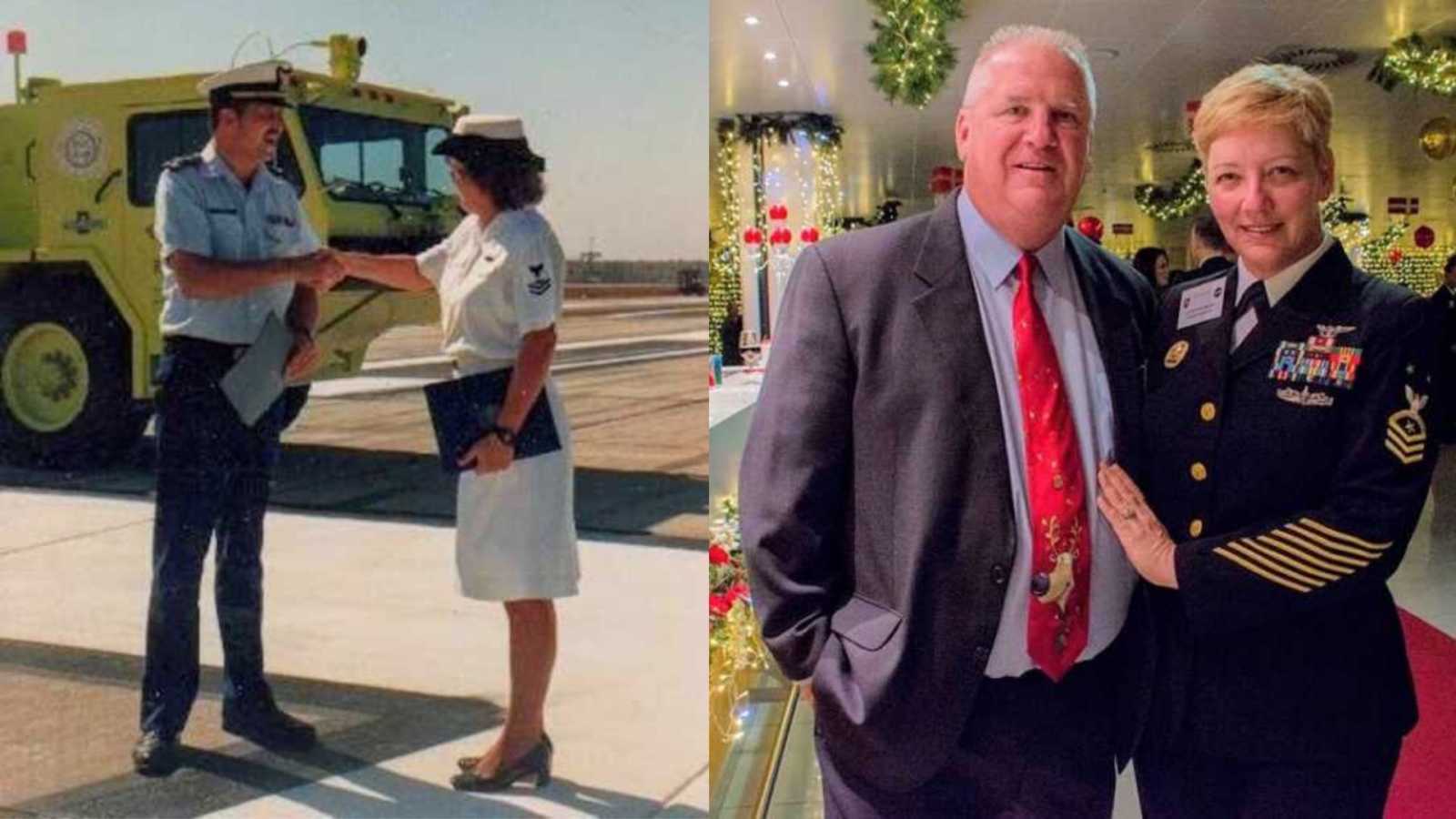 Joining The Navy At 19

Mainly, my sister Linda, one of my 6 siblings, had joined the Army at age 19 in the early 70s during the Vietnam Era and I wanted to be like her and serve. She broke many boundaries then, so it seemed normal for me to join and serve.

I started my career in 1982 as an Air Traffic Controller.

After I was promoted to Master Chief 20 years later, I was promoted into command leadership and served as a command master chief on a destroyer, an overseas naval hospital, and an operational fleet command.

Being A Woman In The Military

I posted the picture of me in the shirt following a Veteran’s gathering while on board a cruise with 16 other female military. During the event, they shared similar stories that I had, about consistently being asked for our husband’s ID card in order to receive military benefits we had earned ourselves.

As far back as 1984, I have faced this bias of being a woman in the military, from those in society who found this an oddity. I was constantly asked for my husband’s social security number to put on my checks when I shopped.

When I did, I would hand it to them and then ask them if they wanted his information or mine since he was not the active duty member, but instead, he was my dependent. They would seem puzzled and then get my information.

This continued even to today as a Retiree.

Recently I was at a national park and showed my disabled Veteran’s ID for national park entry, my retired military ID card and my VA card. All this info handed to the guard and he still leaned in and said he needed to see my husband’s ID before I could enter. I leaned to him and explained the disabled Veteran was me, not my husband.

He said he was surprised and then let me enter.

When I wear my Navy ball cap or t-shirt, folks stop and say ‘thank your husband for us for his service’ or ‘what did your husband do in the Navy’ – very rarely do I simply get ‘Thank you for your service’ when a stranger passes by, and ‘gets it’ that I am the Navy Veteran.

Even banking institutions would send bill statements and such to Mr. Ortloff, even though the account is in my name not his. It’s hard to be in these situations, especially when you are with other family or friends and you are showing ID for an advertised military discount and the clerk at the counter says ‘sorry, the offer is only for the military member, not their wives.’

And on one occasion, as I parked in a senior military parking spot, I was told as I got out of the car, I couldn’t park there if my husband was not with me. I had to explain I was the senior military. It tends to wear on you after a while.

This is why I wear the shirt.

I made the post to honor all the women service members by letting them know there is a polite way to get the message out there and don’t be afraid to correct the situation as it arises.

By using more equal language like ‘what is the military member’s information’ or ‘which one of you is the military member’ or maybe, pay closer attention to the ID handed to you and see it is the woman handing it to you. I absolutely thank everyone for their support of our military, and everything they do to express that.

Now it’s time to go to the next step and remove the unconscious bias that is only the male in the couple, or group. Within the military this is not an issue, it is in the outside world women run into this.

Yes, my husband is a 2-year Army Veteran, a draftee during the Vietnam Era. He served his two years and went on to be a firefighter retiring after 31 ½ years.

Military families are critical to our focus and support as the military member deploys and goes through the training and assignment changes etc. Our families are our foundation, our rock.

I am proud to be a wife of 34 years, but the issue I raise with the shirt and the post are different.

I am hoping that female military members are inspired to not just ‘let it go’ when they are treated as less than a proud Veteran in their own right, and I am hoping the public who so wonderfully supports our military, changes their language and outlook when it comes to including (or not excluding) women in their support.

I absolutely hope this inspires some positive change, moving forward in the equality movement.

Women don’t ask to be equal, we already are equal. Women simply want others to acknowledge that equality.”

‘When the military calls and takes half of your everything away, it’s never easy.’: Mom shares reality of military life, solo parenting