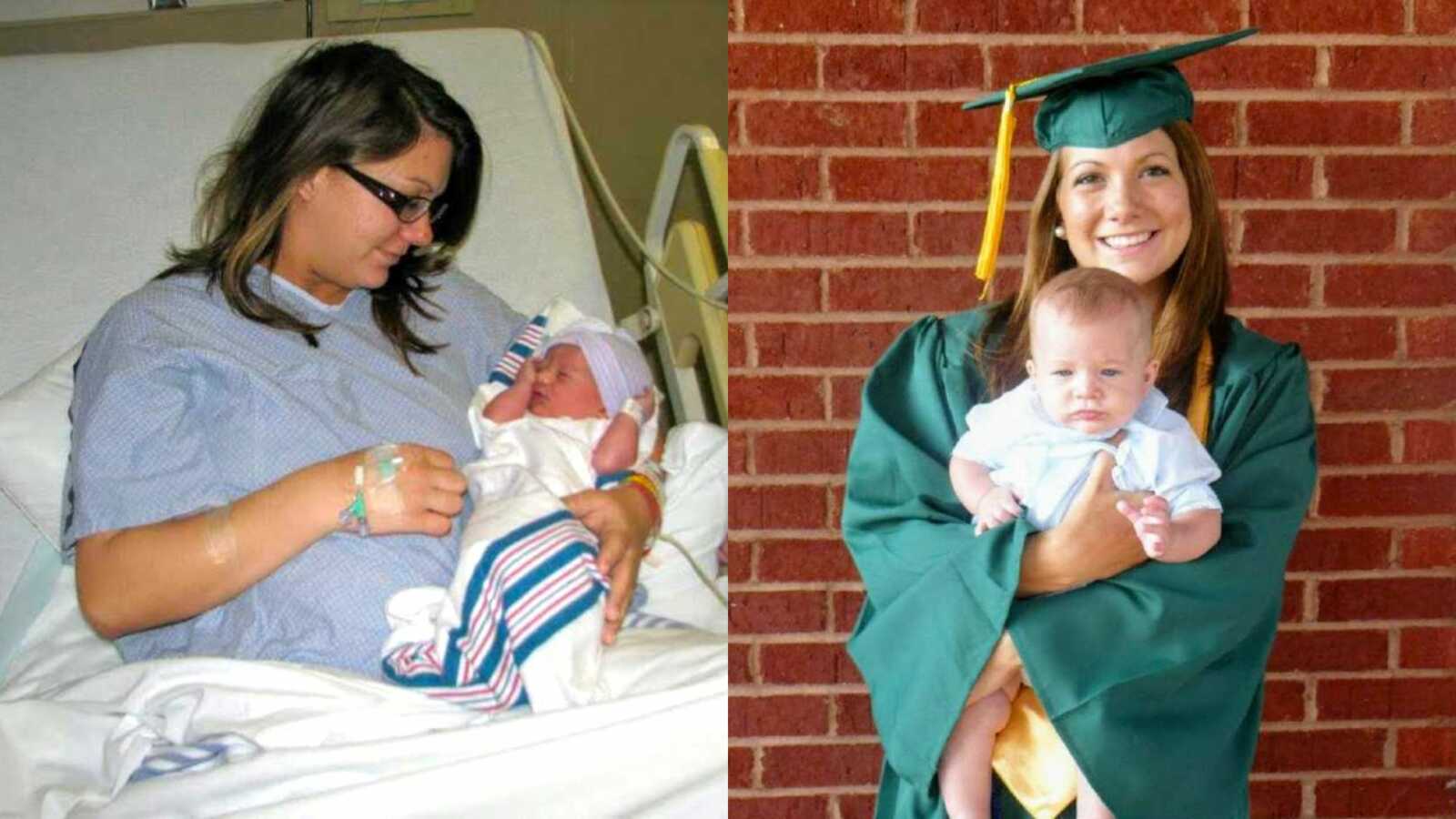 “I was staring down at the floral pattern on the couch when she told me I was a pregnant teen.

I pretty much already knew, but I had hoped this ‘confirmation’ test didn’t confirm as much.

The tears rolled down my face and landed on that same floral pattern on the couch in the pregnancy center. The room was open and the lady that sat directly in front of me had a solemn look on her face and she tried to make eye contact; I continued to look down.

I didn’t have words. I didn’t want to be questioned. I just wanted to leave. I didn’t just want to leave the cute little office I was sitting in; I wanted to somehow separate from the queasy feeling in my stomach and the shame that spread hot over my body.

‘Does anyone else know you were coming here?’ I shook my head ‘no’ as I continued to look down. She started talking to me about my options but my head was spinning and all I could hear were the pounding internal questions turning circles in my brain.

What will I tell people? How will I respond to that softball coach’s next email inquiring about my visit in the fall of senior year? What will I do?

These were the facts that were clear to me in that moment: I had no plans involving a baby. I had never changed a diaper. I had no money. I had no desire to be a mother.

Every factual voice running through my head pointed to the only ‘logical’ choice: abortion. I had read about it online when I had my first hunch that pregnancy might be the cause for the sickness I’d been feeling.

In my sixteen-year-old brain, the promise of ‘taking the problem away’ made sense. I wasn’t ready. This wasn’t in my plan. According to the websites, there was a pill that could ‘take it all away’ instantly. No biggie. Easy peasy. No one had to know it had ever happened.

As the daughter of two teachers in a small town, I knew this wasn’t what people expected of me. As the starting shortstop on our State Champion softball team, I knew I had big things coming in college. As a carefree teenager, I knew I could hide many things, but I couldn’t hide a big belly.

I had all but decided the right choice for me when I tuned back in to what the lady was saying. I had been waiting to leave because the only reason behind my being here was for the advertised free pregnancy testing.

‘You’re six weeks along. Here’s your baby. He or she already has a heartbeat.’ She pointed to a picture on a paper she held in front of me. ‘A heartbeat?’ I thought. ‘Already?’

It seemed so fast, too fast for me. Five minutes ago, I didn’t even know I was pregnant, and now I’m carrying an extra heartbeat?

It was a fact I’d add to my long list of facts rolling through my mind. It was a fact that outweighed anything anyone could tell me. It was a fact I felt God used to guard my heart and my baby in my personal experience.

‘You really shouldn’t be drinking that,’ one of my teachers said to me as I stood outside her classroom with a Coke. Part of me wanted to chug it right there. ‘Do you know how much other stuff I’ve already given up?’ I thought, but didn’t dare say aloud.

I instead put the Coke in my backpack and found a seat in the classroom. My growing body barely fit into the desk, so I leaned back slightly to make some room to breathe.

It wasn’t easy to make it through a school day before a night shift at the local restaurant, but some parts were harder than others.

There was the morning sickness, which made me late almost every day. There was the flood of emotions that hit at the worst times. There was some back pain and swelling and feeling constant eyes on me, but I learned to count my blessings.

There was a teacher who let me nap during reading time and friends who constantly checked on me. I was surprised and thankful at the outpouring of love I received when I was convinced that if I chose to keep my baby, everyone would turn their backs on me.

These things made it bearable even when it wasn’t easy.

I made a choice I had to live with, a choice that couldn’t affect others the way it would affect me.

Even as a pregnant teen undergoing constant change, I still had no idea what was to come. Honestly, I didn’t even think about it much. There was so much time and energy spent on just surviving each day, trying to save a little money, and learning along the way.

So, I spent my days with a pre-Algebra book and ‘What to Expect When You’re Expecting’ tucked away in my backpack, which I carried in my truck to work each night, as I tried to get ahead for when the baby came and simultaneously escape from reality by being too busy.

‘I am supposed to be induced in the morning,’ I told the labor and delivery nurse, as she admitted me into the hospital around midnight. My contractions had started just hours before, when I thought I was going to get one more good night’s sleep before meeting my baby.

‘Well, at least you had your bag packed,’ she laughed. It wasn’t long before I had my epidural and it all seemed to happen in an instant before it was time to push.

I had so much anxiety over this moment in the months before, but in that moment, I just felt ready. I was ready for something to come of all the crazy change of the last nine months. I was ready to be on to a new chapter of my life rather than stuck in a phase of in-between.

When I heard his first cry, I smiled and giggled actually. I didn’t produce tears to match his; I just stared in awe and asked, ‘Is he okay?’

You see, I didn’t know how this thing was supposed to go, but he was okay; that little heartbeat I knew he had early on was beating just fine. And all of the sudden, he was mine.

It never felt official before, even if I had carried him along with me; I was too busy battling sickness and resentment and confusion. But when I held him, that was silenced for the first time since knowing I was going to become a mommy.

‘I want you to walk me in,’ my seven-year-old son told me just this morning, on the first day of school.

I smiled. I was happy he still wanted me close. These past seven years haven’t been all sunshine and rainbows, but I don’t think that’s true for anyone in motherhood.

On the big days—the birthdays, the first days of school, the anniversaries—I think about the early days before I knew who he was going to be and I’m extra thankful that someone told me how precious this life would become.

I’m thankful God held my hand and carried me through the hard times, helped me navigate the practical stuff, and brought me out of it to this place of contentment. And to think, it all started with a heartbeat.

If you’re in the position I was in, I know how scared you are because I was, too. It took a lot of trust and big faith when I kept my baby. But when I did, this crazy thing happened. It didn’t even ruin my life. Not in any way.

So yes, I’ve done some things the hard way and I’ve grown up faster than I had to and I’ve struggled along the way, but when I look at my sweet ‘baby’ boy, I’m so glad I chose to keep my baby.”

‘We broke up. Everything was perfect. Until I missed my period.’: Teen mom knows adoptive parents are ‘the one’ as soon as they ‘walked in the door’