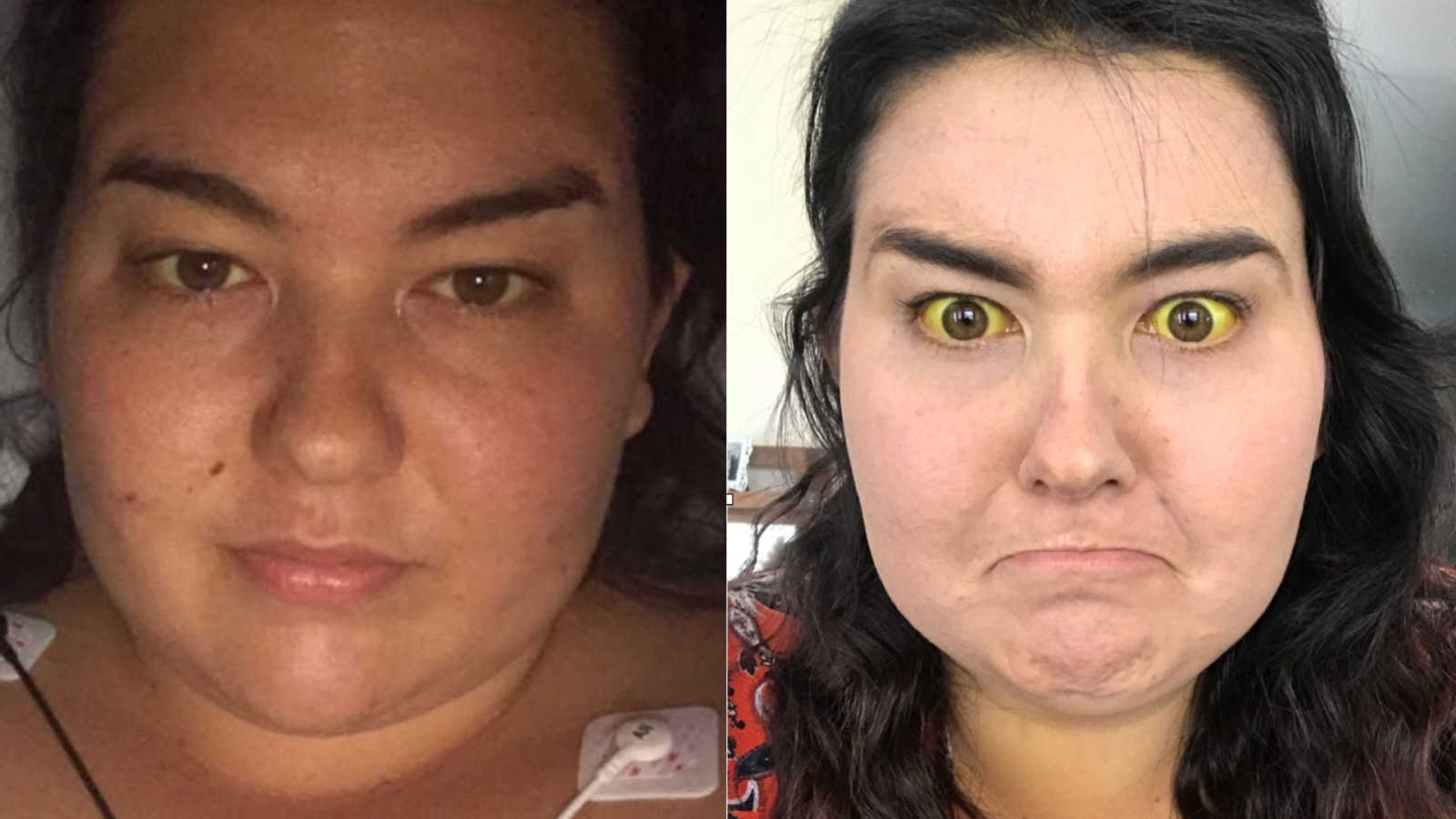 “It started off as a typical double shift at work. I took my clients to church and sat with a co-worker outside. She asked how I was feeling. I had been fighting horrible flu-like symptoms for almost a full week leading up to this Sunday. I told her I still had the flu but I was going to be off for three days in a row that week and I could mend fully during that time. She told me I looked yellow and that it wasn’t normal to have such severe symptoms for such a lengthy period of time. She’s a momma bear type and urged me strongly to go get checked at the ER. I thought she was being a bit dramatic and told her I’d go to the walk-in after my shift the next day.

I went about my day trying desperately to be okay. By the time I made it to the second part of my shift I had a raging migraine  and couldn’t keep water down. I was relieving a co-worker from her shift and she also noticed I looked a little yellow. She offered to pull a double as long as I promised to go straight to the ER. I did not agree to this because I am stubborn and because it was going to be an easy rest of my shift.

After getting off shift I had to run to my company’s main building where there are nursing staff. I was getting ready to leave but decided to ask a nurse if she thought I looked yellow. She informed me I ‘looked like a damn banana’ and that I needed to go to the ER right away in case it was my gallbladder. I rolled my eyes and she threatened to march me to the ER herself. Only then did I realize it was probably more serious than I had thought (sorry to my two co-workers who I didn’t believe).

At the ER they ran approximately one million tests. They sent me for ultrasounds. Nothing indicated my gallbladder was the source of the problem. They ran a full hepatitis panel which came back negative. Finally after spending the entire night in the emergency room the doctor admitted me until there was an answer to my jaundice. This terrified me. I couldn’t believe there was no easy answer. I couldn’t bring myself to call anyone and scare them, too.

After a liver biopsy, about a million more tests, and three more days in the hospital, the doctors concluded I had medication toxicity induced hepatitis. I was so angry that the medications that were supposed to help me had such terrifying effects and I was never even warned that liver damage was an option. They monitored my numbers for two more days and then sent me home with strict orders to not take my birth control anymore and to follow up weekly with the gastroenterologist.

My liver function tests spiraled out of control. The numbers that needed to go down radically were climbing at an unbelievably rapid rate. The GI doctor enlisted the help of a liver specialist from Denver. My mom came all the way from Colorado on a couple of days notice to support me. We met with Dr. Kulig and got the scariest news of my life at that point. My numbers had gotten so bad that he wanted to see me at his clinic in Denver to  start the process of qualifying me for transplant. WHAT?! I had only gone to the ER hoping for fluids to help with my symptoms and now I was on the road to transplant.

I went to stay with my mom about an hour away from the clinic. The support my mom and step-father showed me during the scariest journey I thought I would ever face was unbelievable. We did labs every week and followed all of the doctor’s orders. I wasn’t taking any medications other than the worst tasting powder drink ever to help control itching caused by my severely elevated bilirubin levels. The doctor concluded it was not my birth control but one of the many migraine medications I was on.

One day we went to Denver expecting the same thing we had come to expect from these appointments. I would get labs and the doctor would tell me the numbers stayed about the same. This appointment went sideways very quickly when the doctor informed me all of my critical numbers had spiked. I was admitted to the hospital where the process of blood-work, heart tests, and other scans would lead me to transplant if my numbers increased further. It was scary and miserable. I just wish I had known this was possible. I wish I had known what to look for and when to see a doctor.

After five days in the hospital my numbers had started decreasing at a stable rate. I was discharged and monitored my lab numbers closely. After another month my numbers continued to stabilize and I was sent back to Montana. I wish that was the end of this story. I wish it was just a nice story that ended with me getting all better.

It’s not. I did not get all better.

I noticed a large lump in my neck about three weeks after returning home. Because I am stubborn and because I had been told by doctors that they watch lymph node swelling for about a month before taking action, I waited. I went into my primary care provider’s office a month later. She was horrified by the extent of the swelling and ordered a biopsy right away. As soon as the biopsy was ordered my mom and step-dad made the trek across Wyoming to be with me again.

Unfortunately, the biopsy came back positive for Hodgkin’s lymphoma. I sobbed as the doctor said the words that have changed my life. I had no idea how that could be what I was facing. I am only 23, and I’ve already faced a critical illness. How could I keep fighting? I sat in the hall outside of my room and sobbed to my mom, step-dad and grandma. I kept telling them I couldn’t keep fighting. I didn’t believe I had anymore left in me after months of chronic exhaustion, chronic itching, and chronic anxiety that I would be forced to face a liver transplant. We met with an oncologist who looked over the previous  three months of my records and immediately became uncomfortable treating me without involving the liver guys. So back to my mom’s house I went.

I was admitted to the hospital in Denver for almost two weeks while doctors pondered a treatment plan that would not irritate my liver more. I had minor surgical procedures and more tests.

Through all of this I began receiving messages from childhood friends, acquaintances, and family. They showed nothing but love for me and truly helped change my outlook on what I could only think of as the worst thing ever. They gave me a place to turn when I only felt like jumping down a black hole. I know that because of all of their efforts, I am here, fighting, stronger than I ever knew I could be.

Finally, the doctors worked up a treatment plan they hoped would be gentle on my liver. I had my first three rounds of chemo in Denver and had great luck. We were relieved to see my liver numbers were actually going down at a much more rapid rate than we had seen in all the months I had been fighting through it.

I was finally able to go back to Montana to finish treatment after Christmas. I am still taking treatment and will learn how effective the modified treatment plan is after having a PET scan soon. Through all of this I have learned what a fighting spirit is. I never knew I had one until I was faced with two critical illnesses in the span of four months. I learned how to be strong and fight for my life. I learned how to advocate for myself and others. I learned the hardest lesson I’ve had to learn, which is that it IS okay to not be okay. I learned to feel grateful for the amazing people in my life (current and past). I learned so much from this experience.

Most importantly, I learned that life is a gift and I will never take the people and lessons in life for granted again.”

This story was submitted to Love What Matters by Alyssa Watts. Submit your story here. For our best stories, subscribe to our free email newsletter.