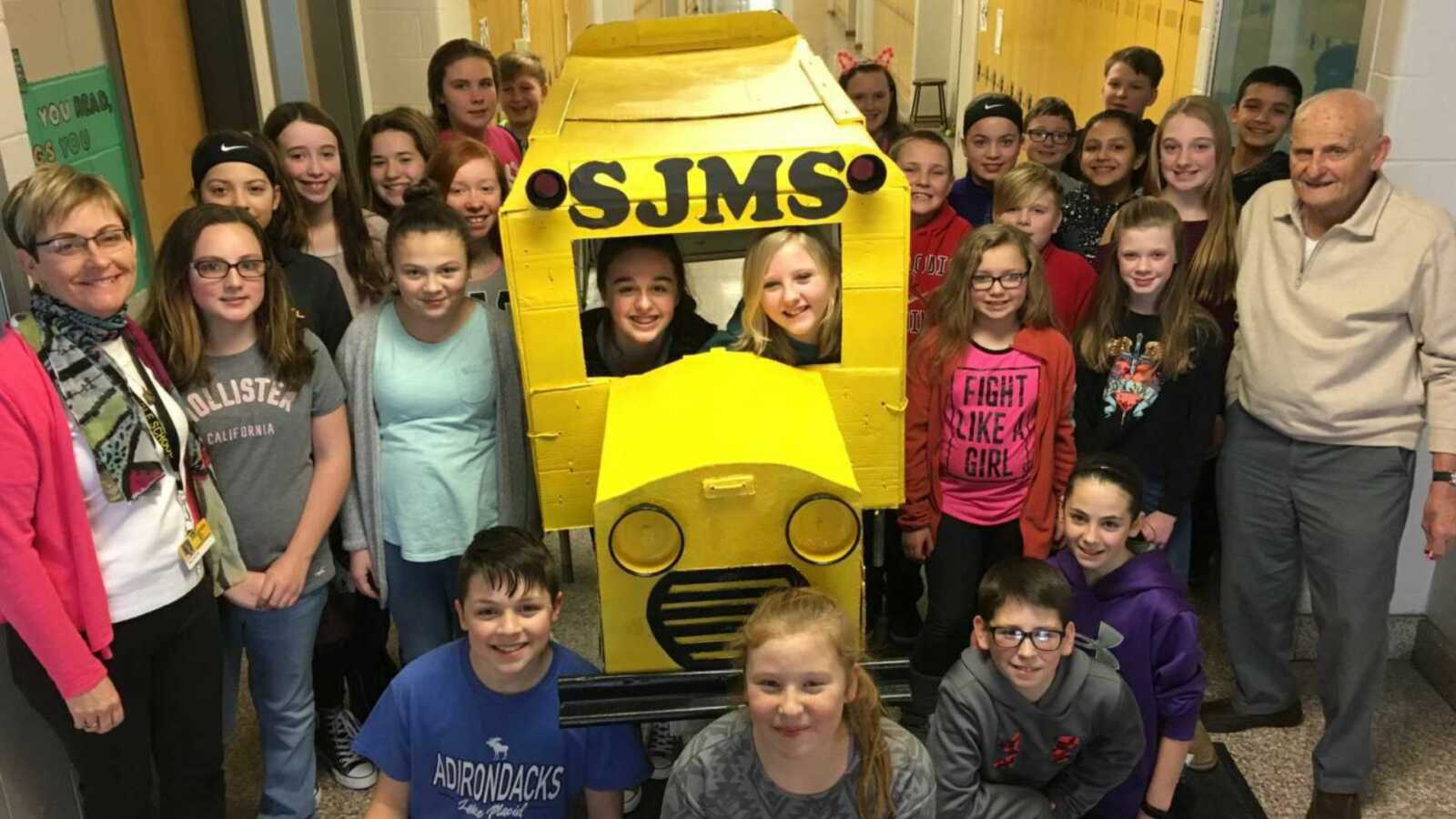 “’My dad came to school with me today.’

This might sound like something you’d hear out of the mouth of a kindergartner at the start of show-and-tell. But I’m 55-years-old, not five, and I’m the teacher in this classroom, not a student.

Clayt Hyde is my 84-year-old, retired-teacher, self-proclaimed ‘Cardboard King’ father who’s been working on a special project for our sixth grade Spartans at South Jefferson Central School. He visited my classroom in order to deliver — and finish with student help — the beast he’d created for us: a giant cardboard bus!

The ‘bus’ is large enough for four students to ‘drive around’ (carry) the middle school hallways as a way of reinforcing our school’s character education message.

The idea for a big bus came out of discussion we had as a sixth-grade team. Last year, I spearheaded our self-made ‘Spartanpride’ program which developed respect, responsibility, and safety for self, others, and our surrounding space. This year, Jon Gordon’s book, ‘The Energy Bus,’ provided a perfect supplement to what we were already doing — encouraging personal growth through a positive attitude.

Teachers taught lessons to encourage each student to be the ‘driver of your own bus’ — a metaphor for inviting positive energy and enthusiasm into your life. Then one of the teachers suggested, ‘Hey! Wouldn’t it be great to have a bus that the kids could drive around the school?’ I knew exactly where we could get one — my dad!

My dad can (and has) made just about anything you can imagine out of cardboard. Corrugated, cereal-box, shoebox, gift box cardboard — it all works in his world! He’s a crafty guy who has a lot of trouble sitting still.

Years ago, he started his hobby as a way to entertain the grandkids. Together, they made puppets, forts, doll accessories, movie sets… you name it!  After they grew up, he kept it up as a way to survive the boredom of northern New York winters.

He gets an idea for a project and holds up in his cellar until it’s done. Tiny buildings, wagons, a peddler’s truck, a lighthouse, train cars, fire trucks, and other mostly-cardboard objects have been created by this guy. And he’s frugal — so most of it’s made on the cheap.

So, I asked him about the bus.

‘Of course! I’d love to make you a bus!,’ he said. He picked up a couple of kitchen range boxes and immediately went to work on it in his cellar using saws, rope, hot glue, and zip-ties.

After about 10 days of envisioning, measuring, cutting, drilling, and securing it all together it was ready for the kids to work their magic… painting it to look like a real bus.

‘The details are what really make it come to life!,’ he announced. ‘The kids will love it!’

He was right, the kids did love it! They had a blast painting the bus and adding letters and details to it. They worked side by side with him to add the finishing touches that transformed his zip-tied boxes into their Energy Bus.

To describe what it means to be so lucky as to have him actively involved, interested, and able to contribute to my teaching of my students is difficult. It’s special. It’s a gift. I love having him in my classroom, and so do my kids!

He’s a funny guy who’s comfortable around kids, so it’s a blast when he’s there with us. It filled me up to I watch their interactions.

The kids are gentle and almost in awe of him and he glows with the energy he feels from being valued by young people. I like saying to them, ‘This is my dad. He was MY sixth grade teacher when I was your age. He’s still my favorite!’

As he helped kids paint the bus, I beamed with pride for all of them — learning from each other, contributing to the value of each other’s experience, and transforming the cardboard into something more.

To me, that’s the essence of the whole experience. I think it’s hard to be a kid today and I see in my dad that it’s also challenging to be elderly. I think putting kids and elders together is an instant opportunity for everyone to ‘win.'”

This story was submitted to Love What Matters by Lynn Kellogg, 55, of Adams, New York. Be sure to subscribe to our free email newsletter for our best stories.

Dear Preschool Teachers, You Changed My Children And I’s Lives For The Better

‘The most meaningful and influential job, underappreciated and underpaid.’: Mom shares ode to hero teachers

SHARE this story on Facebook with friends and family if you appreciate the importance of hands-on learning.