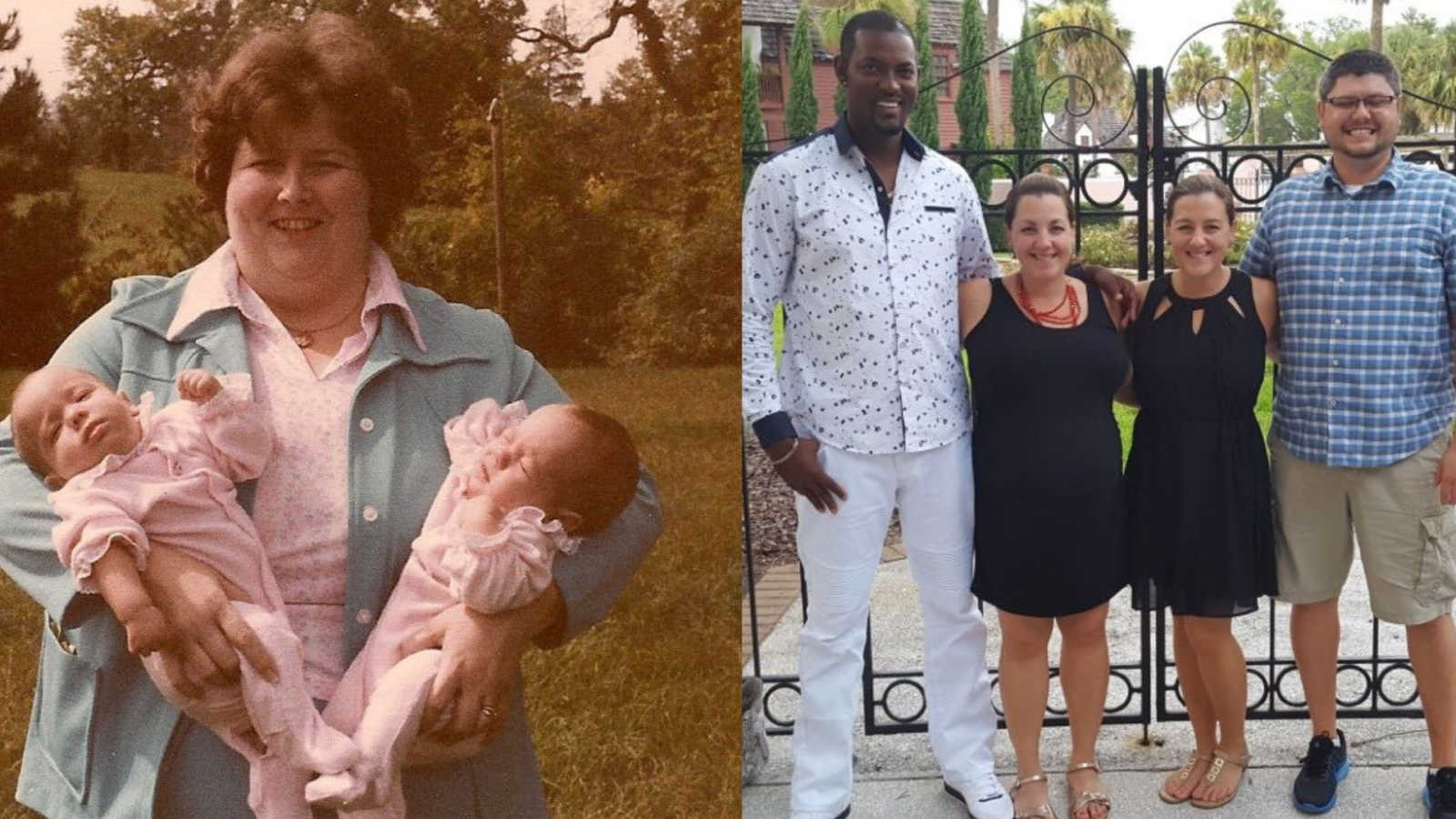 “After 15 years of waiting, the phone rang on a Friday morning. It was the case worker from Catholic Social Services saying she had not one, but TWO babies. 6-week-old twins. ‘Would you and your husband be willing to take two babies instead of one?’ The answer was yes of course, and they spent the weekend running around town, getting everything they would need in order to take us home that very Monday.

My sister and I do not remember when our parents told us we were adopted. It was just something we always knew. We were told we were given up because our mother loved us and wanted the best for us, and that we were chosen because we were wanted and loved. Looking back, they did it perfectly. We never felt unloved or had bad feelings toward our birth mother. We had a happy, healthy home with our adoptive parents. Our dad ran his own communications business and while our mom helped with the bookkeeping, her main role was staying at home to care for us.

We had always wondered about who our birth mother was, that was only natural, but we never did anything about it. It wasn’t until a random reality TV show that prompted us to contact Catholic Social Services to see if we could find out a little more about our closed adoption. To our surprise, they called us back in just a few days- our birth mother had given the agency her contact information when we were 17. And an even bigger surprise was in store- a few years after we were put up for adoption, our birth parents, who were not together at the time of our birth, had reunited and later married. The stars aligned and just 2 weeks after we put the call into social services, we met our birth parents 26 years after parting with them. It was a crazy moment that seemed both surreal and familiar at the same time. Our family more than quadrupled overnight and our new relatives accepted us with open arms. Little did we know our original one would begin to fall apart over the next two years.

To us, it appeared to be normal husband and wife bickering worsened over the following year. But by Thanksgiving, it was obvious something was not right, so it came as no surprise when 2 weeks before Christmas, our dad announced he was divorcing our mom after 42 years of marriage. What did come as a surprise was that he was leaving her for another woman. He had gotten into contact with his high school sweetheart via the internet. He told us he would be leaving the next day to pick her up from across the country and bring her back to live with him.

Needless to say, our mom did not handle it well and became severely depressed. My sister and I pleaded with our mom to get professional help because everything we were doing to try and help her was not working. We had plans to move to Florida that summer and we had to know she was going to be ok. She finally started seeing a therapist and began to make noticeable improvements in her mental health. She even moved out of our family home, which she had been reluctant to leave, into a new one of her own. However, it was then she stopped seeing a therapist, allowing the depression to come back into control. Her physical health also began to decline. She had been overweight our entire lives, but now with her lack of self-care, her weight exacerbated her health problems and things spiraled out of control. She was in and out of the hospital and nursing rehabilitation facilities. With our dad not around, my sister and I took on the responsibility of flying home every time it happened, and each time, pleading with her to make a change.

Then one fall evening, as my sister and I, alongside our birth parents, were watching a parade at the happiest place on earth, we got another phone call that our mom was back in the hospital.

After flying home and speaking with the doctor, we realized this trip was not like the others. We made 2 trips back and forth over the next 2 weeks, and shortly after our mom’s 73rd birthday, the two of us had to make the decision no child should have to make. The doctors had put in a temporary intubation tube to assist her breathing when she was admitted, and it was time for it to be removed. We knew she had a DNR order, but she was unconscious.  The doctor needed to hear it from us to remove the tube and not place her on a ventilator. I remember sitting by her bedside with my sister, sobbing that she was going to miss everything- exactly what we had feared and why we had always pleaded with her to take care of herself.

But as the saying goes, life waits for no one.  And mine was moving fast. I had met my husband abroad the previous year and the day after my mom went into the hospital for the last time, I got the email from immigration stating that his resident visa was finally approved. My husband finally arrived in the states less than 2 months after our mom passed. She never had the chance to meet him in person. And only 3 months after she was gone, I found out I was pregnant with my first son.

Over 6 years have gone by since she passed. I have 2 beautiful boys. My sister is married to a great guy whom she met 6 months before our mom passed away, and like my husband, she never had the chance to meet him. We have a wonderful relationship with our birth parents and see them as often as possible. We go home to visit our adopted father and family when we can. We love spending time with them, but things were never quite the same after the divorce. The only constant my sister and I have always had is each other and we are thankful for that. Being able to rely on one another during everything we experienced with our mom’s passing was what drove me to have a second child. Having a sibling for support has been priceless in our life’s experiences.

I am fortunate to be able to stay home with my boys today, just like my mom was with my sister and me. And while it is the most rewarding job, parenting is hard.  But I want to make sure I am around to see my boys become adults and live their lives. I don’t want to miss any of it- because there is not a birthday, anniversary or holiday that passes that I don’t think about my mom missing it. So, I do my best to take care of my physical and mental health each day. This is not always easy or convenient, but I am lucky to have found a supportive, virtual community to help me stay motivated and see the big picture when life gets tough. And while my boys aren’t old enough to understand why I have 2 dads and 1 mom, and never know the mom who raised me, we answer my eldest’s questions as they come and remind him (and ourselves) how lucky we are to have the family that we do.”

This story was submitted to Love What Matters by Jennifer Thomas. Submit your story here. For our best stories, subscribe to our free email newsletter.