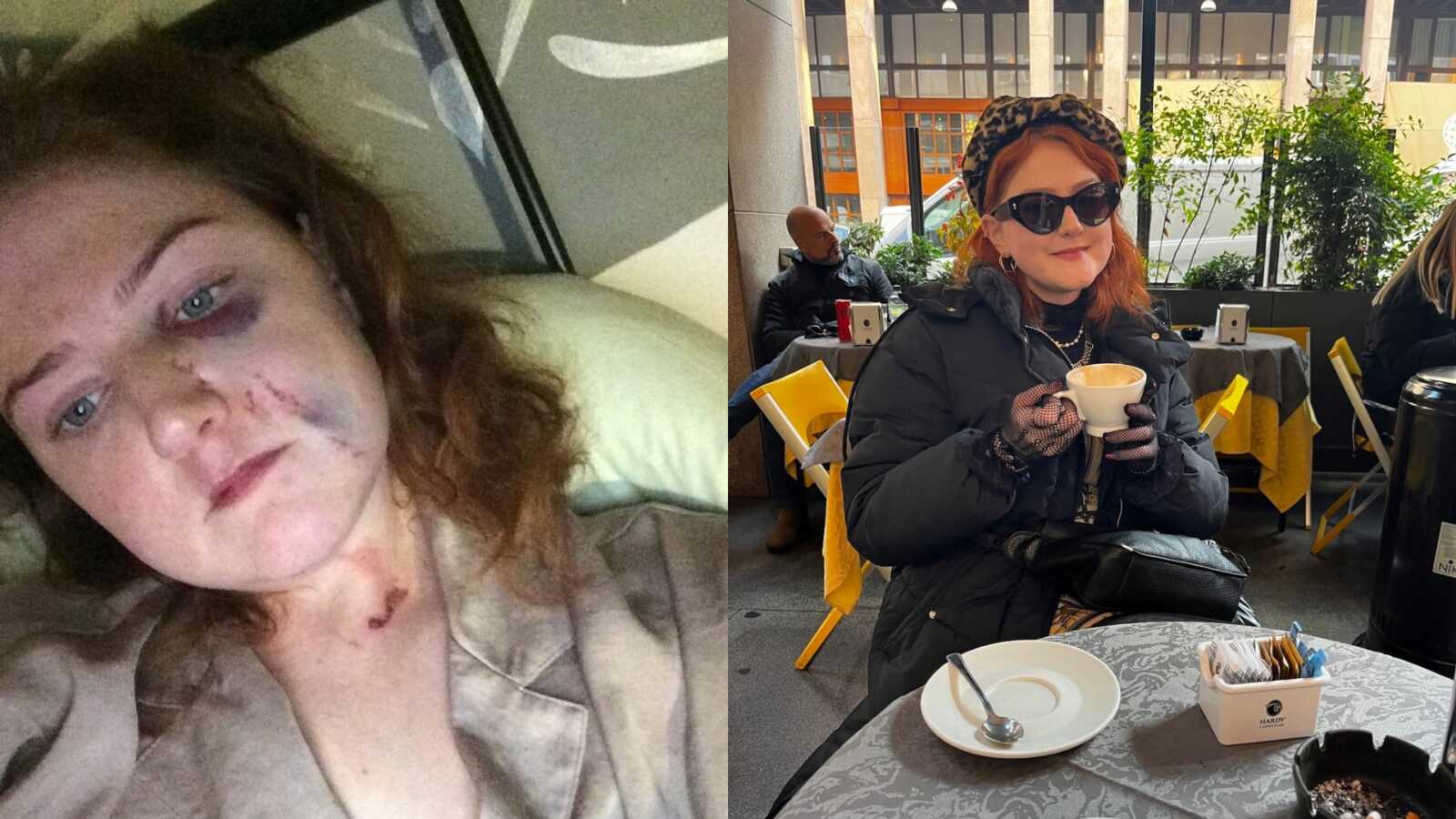 “Hi, I’m Saoirse, and I’m an alcoholic. They were the 3 words I reluctantly muttered to the relief of my family and friends. I was the last to my coming out party, the last person to realize I suffered from a progressive chronic disease – dearest alcoholism.

My story, well where to begin, it’s hard to recall the mayhem and chaos because I was in a pure blackout. But strip it back, I began drinking at age 12, my parents never shied us away from alcohol, it was never taboo or the elephant in the room.

As an Irish Catholic, the ‘blood of christ’ was the only incentive for attending church. It resembled the taste of alcohol, and that gave me a feeling best described as a warm blanket on a cold day. It is ludicrous that from such a young age, I experienced these sensations from sampling wine at Chateau’s in the south of France as well.

I was obsessed with the feeling and confidence I oozed from the initial sip. Unfortunately, as things progressed, and all digressed around me, one drink was too much, and 100 wasn’t enough. That’s the best way to condense my alcoholism.

My story comprises a typical drunk-a-log, but for those reading, I’ll bore you with the details.

I’m someone who’s suffered traumas of all types, but the pinnacle would be witnessing my brother die in an RTC. There’s something so chilling and frightening about seeing a loved one die in front of your eyes. He was instantly killed, and for that, I’m grateful otherwise he’d have suffered and been vegetated.

That’s when the vodka became a daily thing, vodka without a mixer, straight and strong. I would seek oblivion, anything to suppress the pain and grieving emotions, I needed an escape from reality. I would walk miles down the canal just to get wine. I’d steal from my Dad and shops just to fund my habit. You name it, I probably have done it.

Denial is something I carried with me for years. I would hate when Doctors would ask about my weekly alcohol intake, but I thought I’d pulled the wool over their eyes.

I was holding down a job, but would always leave before they could fire me, my pride and ego wouldn’t allow for me to be fired. That’s the thing you learn about in recovery, the ego – ‘Edging Good Out,’ and christ was I edging anything good out.

I also lived in active addiction with my now ex-partner, between cocaine and booze all bets were off. Volatility, toxicity, and violence were the 3 core principles of our relationship. It was sad given we were just 2 young people in love, but addicts are like magpies, we attract toward each other. It broke down, the remnants of that relationship, and it meant leaving my first home, sofa surfing, and moving back to the family house.

The break-up was the perfect leverage to manipulate everyone around me with. Just like in the films, I could justify being that woman with her girlfriends crying over cocktails. It was my free pass to lord around drinking because if you had my life you’d drink like me?!

As my drinking excelled, the consequences worsened. I caused chaos at my best friend’s bachelorette party, I got arrested for drunk and disorderly, and then my crash occurred…

14 months ago marks one of the greatest moments of my life, at 4.5 times over the legal driving limit, I got behind the wheel of my car and flipped it. A broken nose and ribs were the height of my injuries, I didn’t cause harm to anyone apart from myself and my dog.

It’s all a blur, one I’m grateful for because within a week of this I found myself in a hospital detoxing for the next 9 days. I finally hit rock bottom, one that wasn’t robbed from me.

I was sick and tired of being sick and tired, but so lost and scared. I was scared because I couldn’t see a life with or without alcohol, which terrified me.

But, the booze stopped working, no matter the quantity I poured down my throat, oblivion wasn’t quite the same. Oh boy, was detox and withdrawal another experience. It’s one I pray never to go through again.

The relief of finally acknowledging and accepting my alcoholism was next to none. My recovery finally commenced and was cemented when I met a friend of Bill’s (if you know, you know).

I’ve learned so much in my recovery. That I’m an egomaniac, self-centered, and self-loathing – that’s to name but a few character defects. I was full of resentment at the start, questioning why at the tender age of 26 did I have to change everything?

All I could see were acquaintances going out, partying, and enjoying some after-work bevies. They were all things of the past, things I honestly could never do without consequence.

I was a Jekyll and Hyde character once I had a drink, no one knew what side of Sersh they’d be on the receiving end of. Either way, it wasn’t a pretty one.

Fast forward the tape, over a year clean and things are different. It hasn’t been an easy road to meander down, in fact, it’s been anything but linear.

I suffer from other mental health issues which exasperated once the drink was put down. From Borderline Personality Disorder to Anorexia Nervosa, I’m not a one-trick pony when it comes to diseases and disorders. Naturally, these things will flare up because I no longer use booze to artificially suppress emotions and feelings.

They often tell you in early sobriety there’s one good/bad thing, you get your feelings back, and damn is it a double whammy. I also learned you can’t control people, places, or things. This was hard to accept as I controlled and mass-manipulated everything and everyone around me.

Today, I can safely say life is far better than it was, I have slowly repaired relationships with family and my dearest friends. I have a small job making me accountable and responsible. Yes, I lost my license but in the grand scheme of things, it was a small price to pay.

There’s an endless memoir I could fill these pages with, but instead, I’d like to reach out to anyone suffering from alcoholism. If in doubt, question the unmanageability it may be causing in your life, and look at the aspects of social, financial, and interpersonal relationships. Alcoholism is a progressive disease. It wants you alone, in a room dead – simple.

That’s the greatest thing about recovery, if you keep things simple, in time your thinking will change. Alcohol is only but a symptom, it’s my head and thinking process that needs to change.

Cross-addiction does have its uses, a remedy with instant gratification. This quickly dwells and falls to the wayside. I still retire back to old behaviors in search of some reprieve.

It can be quite a playground, this doesn’t mean it’s the end of the world though. I just think of my 3 A’s – Acknowledge, Acceptance, and Action.

I normally start the process by speaking to my sponsor, and to other alcoholics – people who will call me out on my bullshit. Or I ‘halt my horses, I check in with myself and see if I’m Hungry, Angry, Lonely, or Tired. 8 times out of 10, I’m feeling 2 of those, so I do something about it.

Subtle, cunning, and powerful summarizes alcoholism down to a t. It festers and manifests in various ways, and the behaviors I’ve spoken about are forms of that. That’s why I choose to follow a 12-step program in my daily affairs, it keeps me accountable, it alters my attitude to life, and assists with my thinking.

So for anyone struggling, please reach out, I’m just a girl getting honest about her recovery – a bloody colorful one at that. Get in touch – peace and love ‘xo”

This article was submitted to Love What Matters by Saoirse Niamh of Leamington Spa, Warwickshire, UK. You can follow her on Instagram and her website. Join the Love What Matters family and subscribe to our newsletter.

‘I awoke to no vision in my right eye. I was sitting on a lobby floor, half dressed, my friend begging me to stand up.’: Woman overcomes decades of alcohol abuse, now nearly 2 years sober

‘It’s 10 a.m. and I’m ‘too drunk’ to be seen. With tears in his eyes, he opened the door, ‘It’s always going to be ONE more Kascidy.’: Woman overcomes years of alcoholism, ‘I am alive’