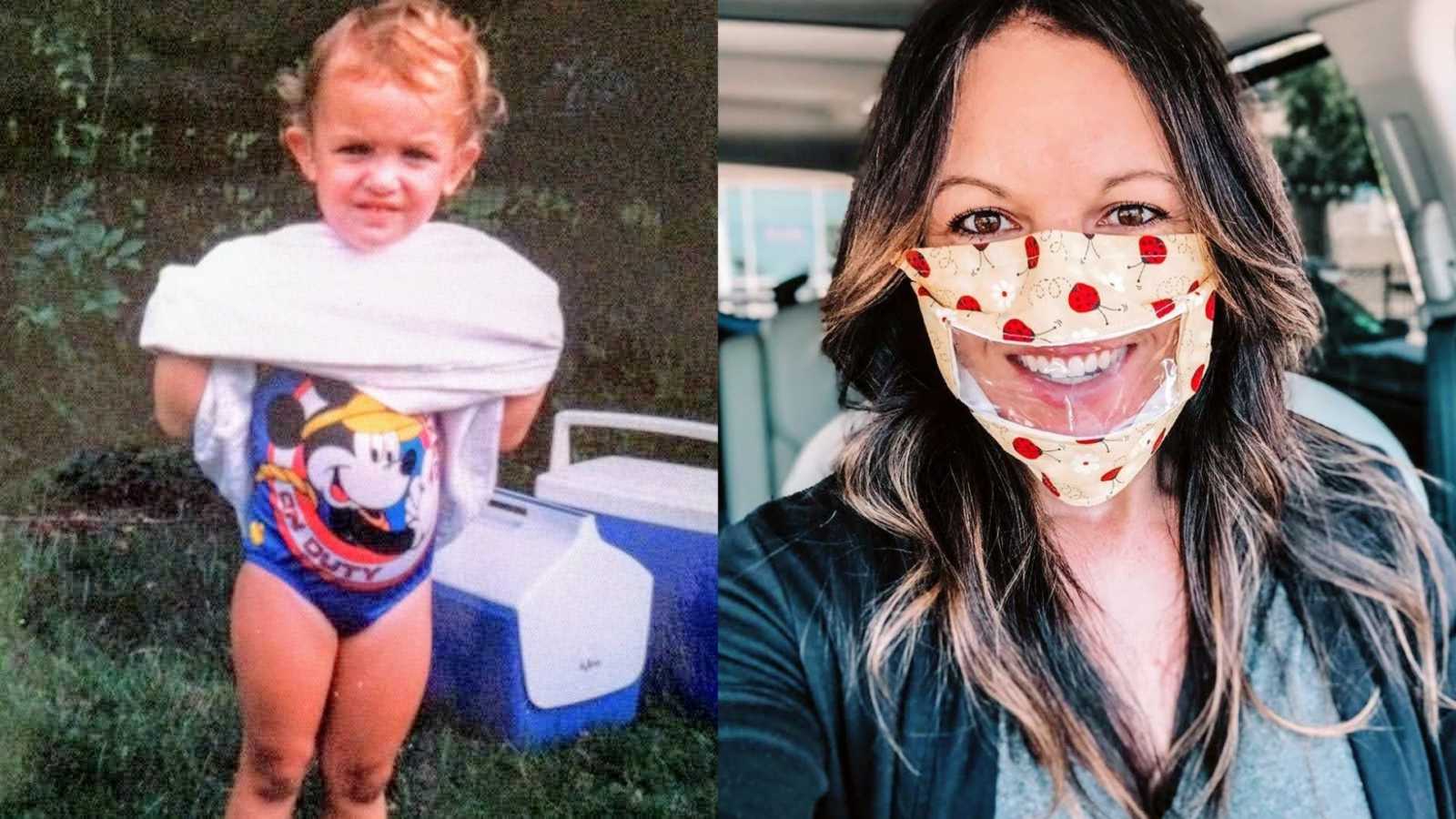 “Growing up was not always easy. Countless days of bullying and taunting eventually led me to use dance as a form of coping. Dance allowed for freedom of expression and interactions with fellow dancers. The thing is, I didn’t really have a voice at such a young age and I had a hard time defending myself. When you are young and your peers see your hearing aids, they can be cruel as heck.

My school experience was different than most students with a disability may experience today. Back then, the Americans with Disabilities Act was on the forefront. Some doctors viewed the deaf as inferior to the hearing. At first, it was at a catholic school for the deaf in Philadelphia. I was probably there for about 5 years. When I arrived in the morning, they would make me take my personal hearing aids off and put them in a safe place and put the classroom ‘hearing aid’ on. I wore this old-school box strapped in the front with strings attached to an extremely hard ear mold that either hurt my ears or fell out constantly. It was connected to the teacher’s mic and the whole class would hear the same thing. Classes were taught in sign language and speech. I remember it mostly being sign and reading their lips with no sound. It was a blur. But I mostly remember the smiles on the teachers’ faces and feeling really safe being around other deaf or hard-of-hearing students.

A few years went by and I was finally in a public school system closer to home. This time, I was the only deaf student. The classroom hearing aid technology improved. I didn’t have to take my hearing aids out, but instead used snap ons that connected to them and the teacher would wear a mic. I was set back a grade behind. I constantly had to be taken out of the classroom to attend speech lessons. The truth is, it killed me inside. I hated the idea that kids were snickering at me and learning new things behind my back. I was also behind in grammar and reading. Trying to listen to the teacher was like being in a trance because it was so overwhelming. I had countless in-class aides sitting by my side. The auditory fatigue was strong.

I hated constantly being asked:

‘Did you hear that?’

‘Are you getting all this?’

‘Come with me now, we’re going to a private room.’

‘Sorry, we don’t have captions.’

‘Is this loud enough?’

‘You need to listen.’

Everyone wants to patronize you. Daily. Feeling patronized in school was one reason I looked forward to dance at the end of the day. I would just dance and dance and dance. It felt peaceful when the music was on. I could just move and no one was in my face.

This went on through high school. The No Child Left Behind Act was just being passed. I didn’t go to my public high school. I went to a charter school instead, but I was still made fun of. It was still hard trying to be a part of the hearing world and finding my place with everyone as best as I could. Text messaging was just coming out at the time and I could only use TTY phone technology where there’s an operator typing up the conversations. I always had trouble and constantly got hung up on. Even today, if I try calling a credit card company using CapTel phone or InnoCaption app (newer forms of TTY), I’m still hung up on.

I was doing pretty well academically and got honor roll almost every semester, so college was in my future. I joined a swim and diving team to look good on my college resume. By my junior year of High School, I got really sick of IEP (Individualized Education Program) meetings. I constantly had those meetings. Ever since I was in grade school. It was all about how well I could or couldn’t hear, how well or poorly I was doing on certain subjects. It always felt like I was a lab project. It always felt like I was being picked on, that I always had to be a ‘perfect’ deaf student. I pretty much stopped my speech lessons by then and wanted more independence, so I requested not to wear the FM device. I needed the independence. I needed to learn all of this school stuff on my own.

College rolled around and I settled on attending Towson University in Maryland, which was only two hours from home. In order to get ‘help’ in classrooms (*eye roll*) I was given a note taker. This person would be taking the same class but I would have the ‘privilege’ of using this person’s notes. Teachers had to provide closed captions for videos. Some of the videos they showed were very old school, so they didn’t even offer closed caption technology.

Even though I felt voiceless at school, I had a voice in the dance world. I spent countless hours dancing and going to dance workshops; I took classes led by top name dance professionals; I attended huge dance conventions and even took classes at Broadway Dance Center. While finishing up my degree, I was fortunate enough to join the Baltimore Blast Cheerleading Squad, which encouraged me to try out for the Philadelphia Eagles Cheerleaders upon graduation. What a freaking fun ride.

I went into the audition with no clue what I was getting myself into. I met some amazing ladies who I still talk to today. I got the experience of a lifetime: one I would have never imagined. I still look back and remember the chills I’d get when the fighter jets would fly over the stadium during the national anthem or performing to the Eagles Fight Song. It seemed like I had it all, but it was not always easy. It was a tough audition. The most nerve-racking part of it was the live stage interview. There is a panel of 10 judges in front of you and, when your turn was up, they randomly pick a question for you to answer as best as you can. I crumbled inside when I had to request help. I hated feeling ashamed and often felt devalued amongst my peers and judges. When I finally built up the nerve to ask for accommodations, I was floored by the response. She was kind enough to let me in on a few interview questions. I soon realized it was okay and I was not going to let this opportunity go over something so minor. I was not expecting the call the next day. I had made the team.

Fast forward almost 8 years later, I went back to school to become a Dental Hygienist. It was probably the hardest thing I ever did. I cried almost every single day. But, this time it was different. Everyone wore a mask, so I knew this would be a challenge. The classroom stuff was rigorous as well. There was newer technology for me to use this time around. I’d read everything live and get a copy of the transcript at the end of the night. After two semesters of this, I gave up. They were making it more work for me. I started realizing everything I needed to learn was in the textbooks and PowerPoints. My grades went up. Magic how that happens.

Clinical days got better. At first, no one understood me as a deaf student. It was hard enough to explain myself. I was constantly judged in front of classmates and patients. They’ve never had a deaf student. That was understandable, but I was still faced with the adversity. It was tough. I cried. But, I made it.

While technology has improved so much these days, there are still classroom discussions you miss; everyone talking at once; mouths being covered; auditory fatigue. While these may seem so minor to you, it’s a huge deal for those of us with hearing loss. Someone once told me, ‘If it’s not scary, you’re not really going after your dreams.’

When you’re faced with a ton of adversity daily, don’t forget that it always makes you a stronger person. There is always someone in the world in a worse position than you are. There are always going to be crazy anxious thoughts. There are always going to be setbacks. Keep going. Fight for what you stand for. Fight for others who don’t have the same power as you. Believe.”

This story was submitted to Love What Matters by Amanda Zubricki of Dallas, Texas. You can follow her journey Instagram and on her website. Submit your own story here, and be sure to subscribe to our free email newsletter for our best stories.

‘A woman scans my groceries, says something to me. ‘I can’t hear.’ I tell her to write. She gives me a dismissive hand wave.’: Deaf woman reminds us to be patient during the pandemic. ‘It goes a long way’

‘Put the device away!,’ a lady was yelling at me. ‘I’m deaf, this is a closed caption device for the movie.’: Woman diagnosed with ‘profound hearing loss,’ credits daughter for giving her ‘strength’

Do you know someone who could benefit from this story? SHARE it on Facebook with your friends and family.

‘Babe, know what I’m thinking?’ I was like, ‘Pizza or Chinese?’ He said, ‘We should have another kid!’ Our surrogate got pregnant with twins! Tim was calm, I was nervous.’: Man finds love after sudden loss with his 3 children

“Tim went on a business trip. I couldn’t understand why I hadn’t heard from him. Then I got the voicemail. ‘Hello, this is the police, please give us a call.’ A detective answered. ‘Who is Timothy to you?’ ‘He’s my husband,’ I said. ‘What’s going on?’ ‘I’m sorry to tell you this, but Tim passed away in his hotel room.'”