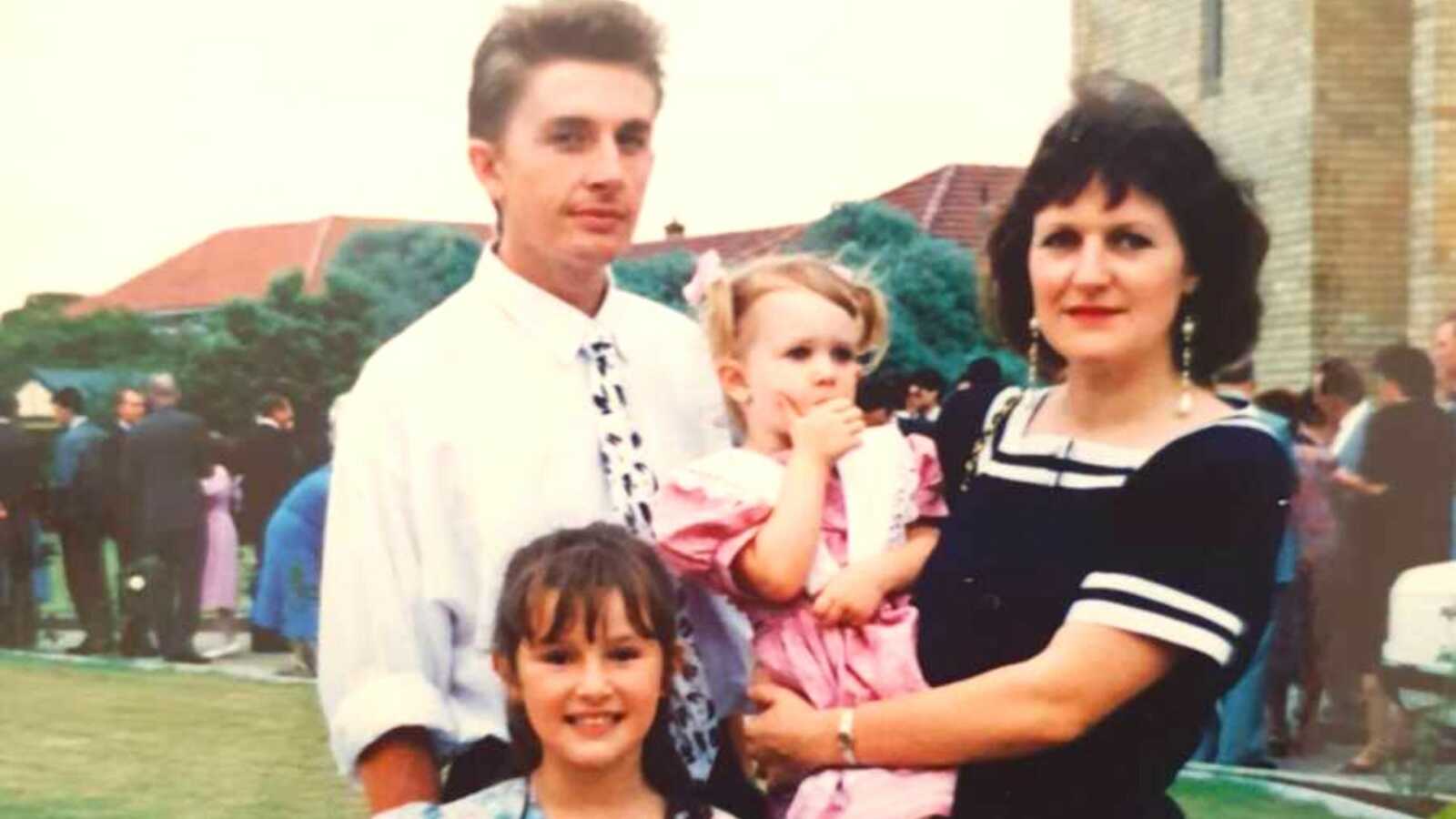 “I always wondered why I looked different to my sisters. They have blue eyes, fair thin hair, and snow-white skin that would burn the moment they were in the sun. Even mom and dad have a really fair complexion. I am the complete opposite – thick and dark brown hair, almond-shaped and chocolate-colored eyes, and olive skin that goes darker and darker the longer it was exposed to the sun.

Everyone questioned my looks. Friends, family members, strangers, and even people at school. I’ll never forget when I was 13, I was on the school bus and staring out the window. All of a sudden, an guy from the same year as me boldly asks, ‘Are you indigenous?’ I exclaimed, ‘Why would you ask me that? I am white!’ The guy grinned and answered, ‘Because you look it that’s why.’ I couldn’t believe he said that. After all, my mother is Croatian, and my father is British. They were both born here in Australia, as so was I. They were born in Sydney, which made me as Australian as the next person born here.

I grew up in the countryside, which is a predominately Anglo area. You were either white or indigenous. Every now and then if I went to the chemist or clothes shop, the sales assistants always checked my bags. Never would they check a white teenager’s bag.

I was the only Croatian in my school. I was called a wog, gypsy, commie, or Yugo by some of the school kids. The Yugoslav wars were heavily televised in the 90s and with the influx of refugees from that region, we were the latest minority group to be in the spotlight and get racially vilified. It didn’t just happen with the school kids, but also the teachers. I used to get into trouble often with one particular teacher. I was so tired of it and confronted her about why she always picks me out and not the rest of the trouble makers. She simply said it was ‘because I stood out.’

These remarks, names, and questions would cut painfully deep. For most of my life, I would gaze into the mirror, wishing I had a cute button nose, blonde hair, fair skin, and look like an Aussie. I would fantasize about how nice it would be to just blend into the crowds rather than stand out.

I started questioning my looks as well. I asked mom why I look different from my family. Why could I tan so easily? I look a little bit like my mom feature-wise, but nothing like my dad. My mom’s mom was very fair, and her dad’s parents even fairer. Mom would just brush it off saying I get it from my Croatian grandfather. My grandfather was unusually dark for a Croatian given the majority are quite fair. My grandfather had black hair, brown eyes, and dark olive skin. My grandmother and their friends in the Croatian community would always beam with pride how much I look like my grandfather and his family. With that encouragement, I believed my mom and left it there.

Until I had my own child.

They say daughters look like their dads. And sons look like their mothers. After I had my son, I have always been told he looks like both my husband and me. My son looks like my husband’s parents. Yet he looks nothing like my parents, especially my father. The questions arose again. One day out of the blue, I called my mother and asked her if my dad was my real dad. She shrieked at me assuring me he is my dad. I wasn’t convinced. I wanted to know where I exactly got my darker features from. I wanted to know why my grandfather and his family are darker.

Upon my discovery, I was obsessed with finding out who my biological father was. Sadly, I came to learn he passed away 13 years ago from lung cancer. My biological father was born in Vienna Austria towards the end of World War II. His mother was Czech Jewish. His father was Sicilian. The most heartbreaking part is I never got to meet any of them. Yet the most comforting part is I look like them all. It all makes sense now. Where I got my dark hair, Mediterranean features, and my olive complexion.

Like an archaeologist, I had unearthed a hidden secret. And that secret was me! I feel like I had been half-buried all my life. Every day I am analyzing each artifact that was once hidden. By drawing up family trees, connecting the dots, reaching out to newfound family members, and reading and listening to family stories that bind me to my lineages and my ancestors. Learning something new every day brings healing and clarity

My new identity has enabled me to get to know myself again. After my DNA results, I had no idea who I was. I couldn’t look at myself in the mirror because I did not recognize her. Now as I walk past mirrors and window reflections, I catch glimpses of the new parts of myself and know who I am. Now I can look in the mirror and instead of being the younger self who would pick herself apart, wishing she was something else. Now I look at myself with recognition and love. I am proud of who I am, how I look, and I look forward to learning more and more of my newfound heritage.

For those who are questioning their identity, I hope you can find the truth before taking a DNA test. Finding out the truth of who I really am has been a relief. I am slowly reclaiming my identity. But the secrets and lies along the way have broke my heart. I am learning what has happened in the past is not a reflection of who I am. I do not need to carry the burdens of the past. The secret, lies, and shame end with me.”

This story was submitted to Love What Matters by Yvette Mystakas. You can follow her journey on Facebook and Instagram. Submit your own story here and be sure to subscribe to our free email newsletter for our best stories, and YouTube for our best videos.

‘It doesn’t matter if you’re white, black, brown, or yellow. If you’re healthy or unhealthy. Single, married, or divorced.’: Woman urges ‘miscarriage does not discriminate’

‘BAM. There it was. ‘50% DNA FATHER.’ I knew he was out there, but he had no idea about me. He got the surprise of a lifetime.’: Woman meets biological father 35 years later, ‘He opened his heart and his home’

‘Hey, mom. Crazy question. Where were you living when you got pregnant with me?’ I just found out my dad wasn’t my dad.’: Woman’s DNA results uncover truth about her real father

‘What do you mean we’re siblings?!’ We’d been dating for months, loved each other. We had NO IDEA.’: DNA test reveals couple adopted by separate famlies are related, now navigating ‘unique trauma’ together