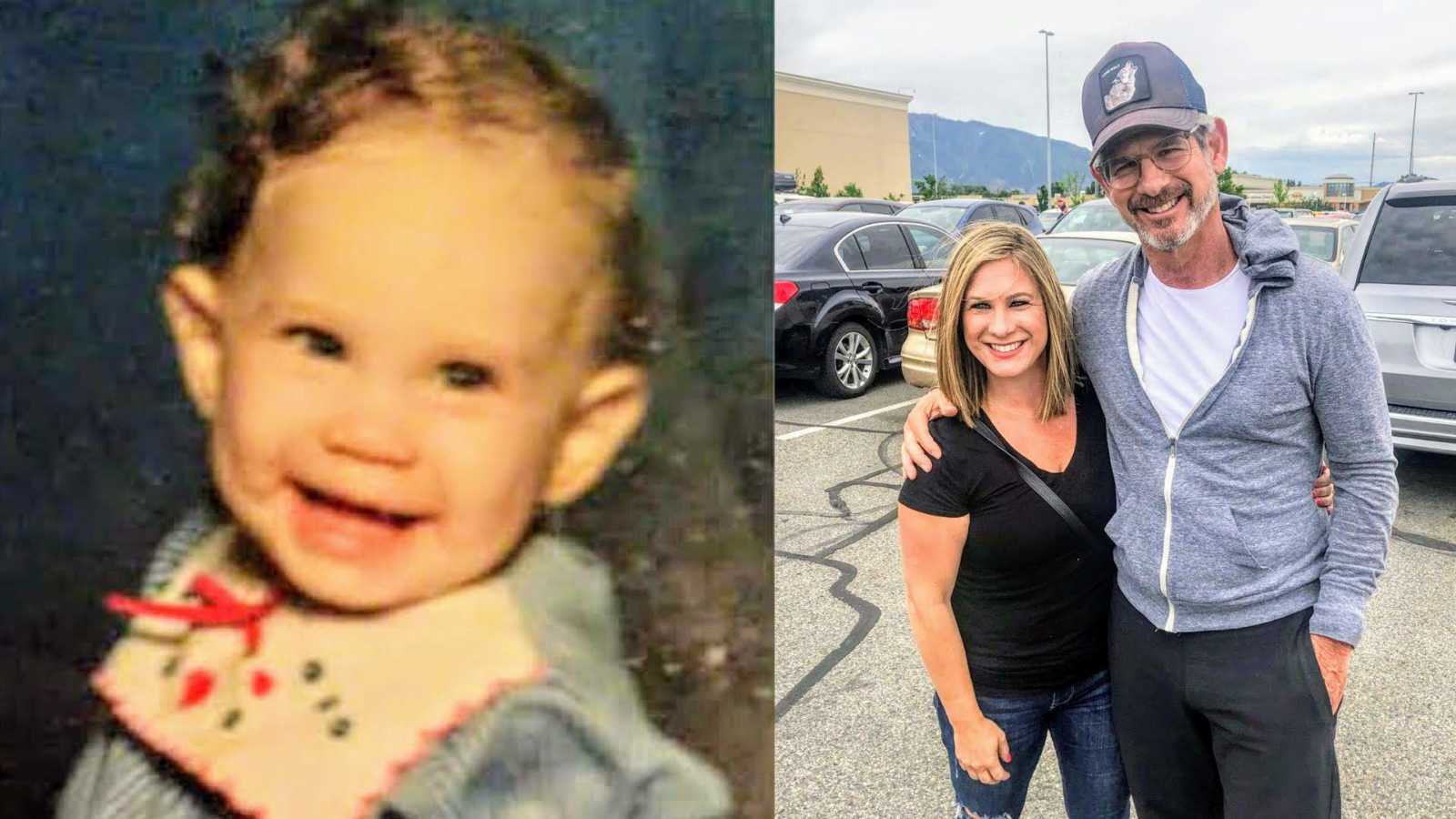 That is how many days passed from my first message on 23andMe to the day I met my biological dad in person. It took 34 years for me to meet him, and although I knew I had a dad out there, he had no idea that he had another daughter. He got the surprise of a lifetime when he received his test results two weeks prior to my first message: Me.

But the story actually begins 35 years ago. He was single, 28, and having an amazing adventure. It was a three-month scuba diving trip with his brother and some friends through Asia, Australia, and the South Pacific. Their last stop was in the Federated States of Micronesia, a group of islands with pristine waters and some of the best diving in the world. You may have heard of the names; Guam, Saipan, Palau, and Turks.

My mother was also single and 20 years old. She had joined the Navy after high school and found herself stationed in Guam. In fact, she was stationed at Barney’s Beach Bar when he saddled up right after his arrival on the island to buy a beer. They had a grand ole’ time together for the couple weeks while he was vacationing there.

When he left for the states, she found out she was pregnant. He has a souvenir he knows nothing about. Given their different lives and locations, there was no exchanging of numbers, there was no keeping in touch, there were no bad feelings. There was just him, her, and then me.

Growing up, I’ve always been curious about my dad. I’ve looked for him numerous times, with no luck. There were things about me that just didn’t make sense. I have blue eyes, olive skin, and tan easily. No one in my family has blue eyes, not my mom, not my sister, or my grandparents. My mom and sister are also pale.

I also have very large ears. Not like normal ears, but ears so big that growing up, I wouldn’t wear earrings because I didn’t want to attract attention to them. I never saw a resemblance of myself in my mom or sister, but knew my features came from somewhere. Where did they come from? What did this guy look like? Did I look like him? Did I act like him?

In 2018, I decided to sign up for 23andMe, hoping to find out more about my background, my medical history, and maybe even HIM. I got my results a couple of weeks later. It told me I am 50% Ashkenazi Jewish. No other family hits, no dad, no joy. Flash forward to February 2020, I was coming off the incredible high of the Chiefs Superbowl win. I had just packed up my life and moved to a new state. I was struggling in my new job, and I had just received a terrible hair service. I was sulking.

I had a tugging urge to check my 23andMe account, which I hadn’t done since October of 2019, and BAM. There he was. Not on page 1. Not on Page 2. But on Page 3. He was there! 50% DNA–FATHER. Right in my face. I think I had a mini-stroke while sending a screenshot to all my closest friends. At that moment, we all freaked out together.

The next day was message one. I knew I had to send a message knowing the interaction could be good or bad. I was so scared. I feared rejection. This had to be a hard pill to swallow. What if he had a family? What if he already had kids? This is information that could ruin lives and families. I drafted a message. It had to be perfect. I sent it to several friends who helped me edit it. I sent it. And then I waited. It was a LONG wait.

Nearly 24 hours later he responded. HE RESPONDED. I couldn’t believe it. As you could imagine, he was puzzled and wanted to understand how this could be. ‘I’ve been hiding in plain sight,’ he said. I could appreciate his reaction. After all, I had known about him for years and he had just found out about me a couple of weeks ago. He wanted to know where I was born and who my mom was to try and solve this mystery for him.

In my second email, I informed him that I was born in Guam and all the pieces came together. Of course, there was no Facebook or Google back in 1986. And so, our relationship began. We talked and exchanged photos. We laughed at how alike our baby photos are (those ears though) and mannerisms were. After only one week of messages, he and his wife wanted to meet me. She’s amazing BY THE WAY. We originally planned to meet in March. But then there was an earthquake, a country-wide lock-down, and a global pandemic, that caused their trip to be canceled.

So, we waited, and waited, and waited some more. We decided to meet ‘virtually’ over FaceTime on Easter day. ‘Twins’, his wife said. We continued to talk, FaceTime, and text as we built a relationship. Once that transitioned into an effortless first meeting just last weekend. We were all nervous and I was even late to pick them up, but all we could do was laugh about it. It was so easy to be together; I knew this was going to be a life-changer.

We spent the entire weekend talking and laughing like there had not been a 34-year gap in the relationship. They introduced me ‘virtually’ to their daughters. I now have two new sisters and we can’t wait to get together.

The experience has been more than my wildest dreams could have imagined. I’ve been welcomed into their family and community, with the widest open arms. During our very first phone conversation I was asked, ‘What are you looking for out of this?’ And my answer was as sincere and raw as it could be. ‘I honestly would just like to get to know you. Maybe have a relationship with you and maybe your family. But if that’s not something that you’re interested in or comfortable with, I completely understand. I know how sensitive this is for all involved. I’m just thankful you’ve given me the opportunity to talk to you.’

My experience is positive and unique. I will love telling this story for years to come. And now, we are family.”

This story was submitted to Love What Matters by Alicia Warren. Submit your own story here and be sure to subscribe to our free email newsletter for our best stories, and YouTube for our best videos.

‘What do you mean we’re siblings?!’ We’d been dating for months, loved each other. We had NO IDEA.’: DNA test reveals couple adopted by separate famlies are related, now navigating ‘unique trauma’ together

Do you know someone who could benefit from this? SHARE  this story with family and friends on Facebook.