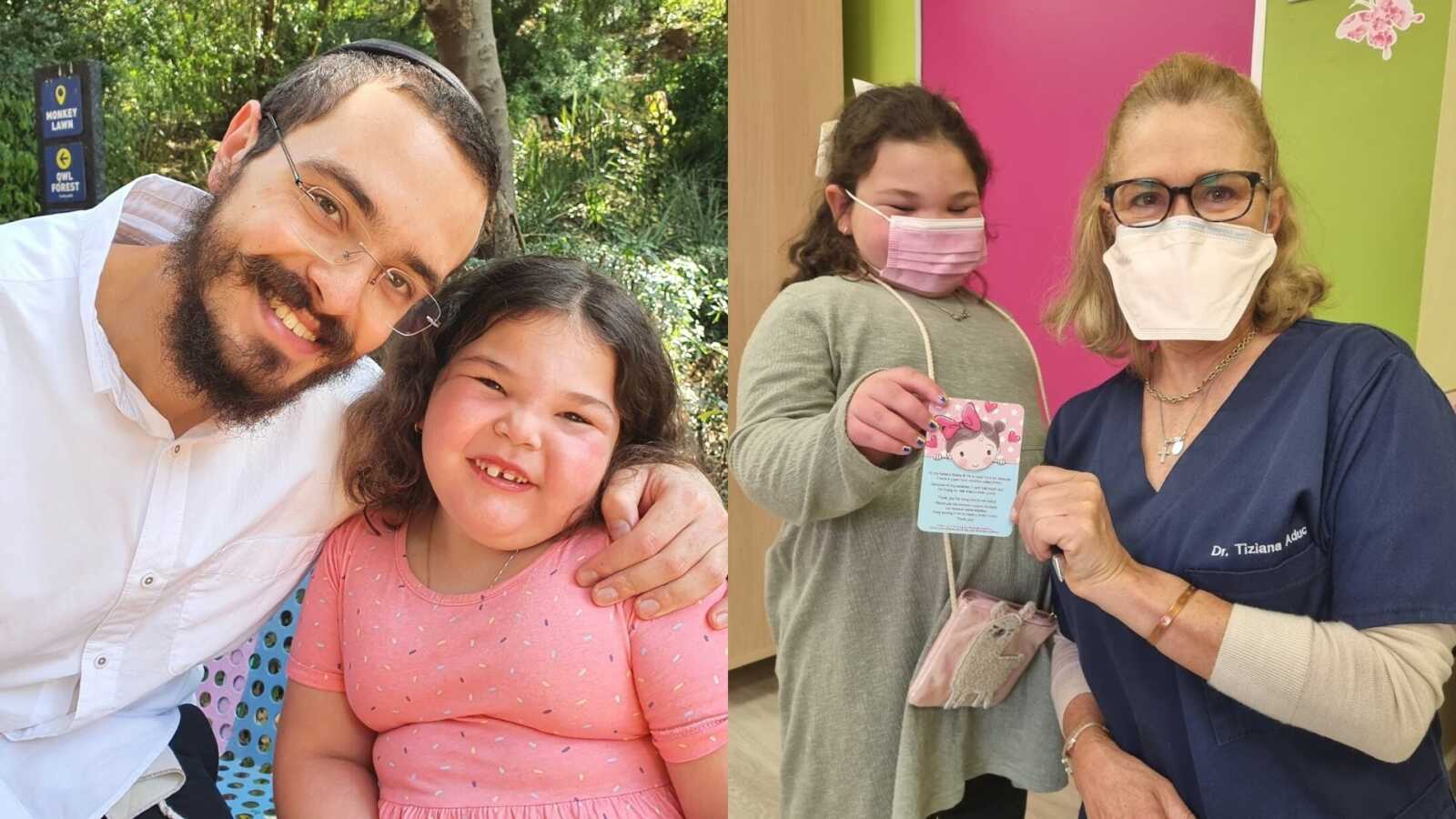 “Everything had changed forever, and we had no idea.

Wednesday, December 7th, 2016 was an ordinary Johannesburg summer’s day. Skies were blue, jasmine scent clung to the warm air, and rolling blackouts meant that we had no electricity at home.

It was the last day of school, and my wife, Naomi, and I had met with the high school principal before collecting our children to head home. It should have been a lazy day. Our twelve-year-old son arrived home with an autographed school shirt, a testament to the end of his tumultuous journey through elementary school. That was about as exciting as we had expected the day to be.

No electricity meant no computer, so I chose to do some paperwork at my office, across from our house.

Our then-sixteen-year-old daughter burst through the door: ‘Something’s wrong with Shaina, you need to come home!’

I usually keep my head in a crisis. I switch into action mode and only collapse once the dust has settled. I dashed across the street.

The scene at home was chilling. Naomi sat at our front door, her face flushed with terror that radiated directly into my chest. Shaina lay stiff in her arms, her face crimson, lips bluish. She was breathing—sort of—rapid, shallow breaths that seemed to follow no pattern.

I yanked her from Naomi’s arms, turned her face down, pounded her back, thrust upwards against her diaphragm. Nothing. Naomi’s voice sounded strangely distant on the line again with the emergency dispatch, urging them to get to us quicker. Kids hovered in the background. I hollered for someone to hold our gate open for the paramedics.

My brain decided Shaina must be choking, but my pounding and thrusting had done nothing. Naomi tried to clear her mouth, and Shaina bit down on her finger. Hard.

Eventually, after five minutes that felt like years, a first responder screeched into our driveway. He was followed almost immediately by another, then another. They immediately checked vitals, applied ECG leads, took blood pressure readings, and tested sugar levels. Within seconds, our dining room had become a blinking, beeping casualty ward. Somehow, I still kept my head. I kept my head as they cut open her petite pink dress to monitor her vital signs. I kept my head, despite the urgency in the lead paramedic’s voice that indicated he was out of his depth. I kept my head as they battled to run an IV.

I lost my head when they brought in the defibrillator.

Thank G-d they didn’t use that defibrillator. It was gut-wrenching enough to hear them say, as they loaded her into the waiting ambulance, ‘Your daughter is in a very serious condition.’ It was code for ‘we have no idea what is going on here.’

A seizure becomes life-threatening if it continues for more than fifteen minutes, Shaina’s had lasted over an hour. Shaina would suffer a series of these bizarre life-threatening seizures over the next year and a half.

We only started to breathe again when her neurologist eventually controlled the fits with medication. The doctor wasn’t satisfied, though, that she had identified the root cause of the problem. Shaina was barely talking. She was unsteady on her feet and not toilet trained. We had always blamed her developmental delays on her having been born seven weeks premature. The doctor wasn’t convinced and started a thorough medical investigation to understand what was going on.

When we eventually received an answer, it was devastating. We had sent blood samples to the USA for a genetic screen, which revealed that Shaina had BPAN—Beta-propeller Protein-associated Neurodegeneration. Our neurologist had never heard of it. Our trusted pediatrician couldn’t tell us what it meant. Shaina would be South Africa’s first (and to date, only) case.

BPAN was only discovered in 2012. Researchers are still studying it, and there is no treatment or cure. BPAN means that the brain can’t clean up after itself. Excess iron builds up throughout the brain over time, interfering with the brain’s function. Children with BPAN have a range of developmental delays. Many, like Shaina, are almost entirely non-verbal. Their childhood development is very delayed. At some point, their development stalls before they regress into symptoms of Parkinson’s and Alzheimer’s. It’s devastating for parents and siblings.

Shaina’s diagnosis sent us reeling. Covid lockdowns helped us to regroup as a family and try to digest the enormity of our daughter’s condition. Early on, we decided we would not define Shaina by her condition but by her sunshine personality. Shaina is the sweetest child, who brings smiles to the faces of every person she meets. She barely talks yet has a massive fan club. People naturally gravitate towards her, and she somehow knows just who needs a dose of her all-day smile.

Watching Shaina interact with people helped us realize that she naturally and unassumingly draws kindness from strangers. She would toddle into a flower store with her mom and walk out gifted with her own bouquet. Strangers vie for her attention, and she constantly receives gifts from a long list of admirers. We realized that Shaina has come to this world to help spread kindness.

So, we printed a card for her to give to all those people who try to connect with her. People would grin awkwardly at us when she would say nothing in response to their friendly ‘what is your name?’ or ‘how old are you?’ conversation starters. They’d turn to us and say, ‘Oh, she’s shy.’ We’d explain that she has a rare condition, and they’d feel self-conscious for having asked. So, we printed cards that say, ‘Hi, my name is Shaina, and I’m a super-rare kid because I have a super-rare condition called BPAN.’ The card explains that she barely speaks, thanks to the person for being kind to her and encouraging them to pay it forward by sharing kindness with someone else. We call them ‘kindness coupons.’ Shaina loves handing them out, and the responses from people have been deeply heartwarming.

Recently, we decided to broaden the scope of Shaina’s kindness campaign. We printed a new set of cards, which start, ‘Hi, I’ve been inspired by a super-rare kid called Shaina’ and then include the pitch to share kindness. We decided to call the campaign #akinderworldnow, which also plays on the word ‘kinder,’ which is Yiddish for children. Despite the challenges of Covid, Shaina managed to launch her kindness campaign at half a dozen schools last year. She has shared over 5000 cards with her doctors, politicians, strangers on the street, airline pilots, first-responders, waiters, and singers.

Her campaign appeared on national TV in January, and we plan to launch 100 new kindness projects in South Africa and abroad this year. BPAN is challenging. Shaina requires all kinds of medical care, and we have to watch her health like a hawk. It is difficult to see her peers progress through school, while she remains in a class two years her junior. Sleeping is a huge challenge, and she refuses to eat most things. She can’t tell us when she feels unwell, and a gentle rain can scare her silly. But we are blessed. She lights up our home. Her hugs are legendary. Shaina attends the most loving mainstream school that has an awesome inclusion program. She has doctors who love her and carers who worship her. Her classmates treat her like a hero, and our community pampers her.

When we first understood Shaina’s diagnosis, we were terrified that she would suffer through a life of challenges. She lives a life of love and joy. Shaina dances through life, singing the wrong lyrics on the top of her lungs. Her contagious laugh brightens the gloomiest room. She smiles as soon as she opens her eyes and keeps smiling almost the whole day. She shows off her painted nails and revels in the limelight that her condition has brought her. Shaina is our teacher. Her joie de vivre and indiscriminate love for all confirms for us every day that she lives up to her name—Shaina Brocha, a beautiful blessing. We are privileged to live with such a unique soul.”

This story was submitted to Love What Matters by Rabbi Ari Shishler from Johannesburg, South Africa. You can follow his journey on Instagram, Facebook, TikTok, and his website. Submit your own story here, and be sure to subscribe to our free email newsletter for our best stories, and YouTube for our best videos.

‘Scarlett’s 14th birthday came around and no one showed up. A friend told me, ‘I don’t want my daughter to witness a seizure.’: Special needs mom touched by friend’s act of kindness for daughter’s Sweet 16

‘Your son has the worst epilepsy I’ve ever seen.’ It’s insane to have doctors ask how to treat your child.’: Mom shares son’s journey with Epilepsy through misdiagnoses, mistreatment to 3 years seizure free

‘My daughter was separated from her only true friend. Her teacher. A person who said, ‘Come to me as you are.’: Mom of autistic child thanks teachers for act of kindness ‘you are our heroes’