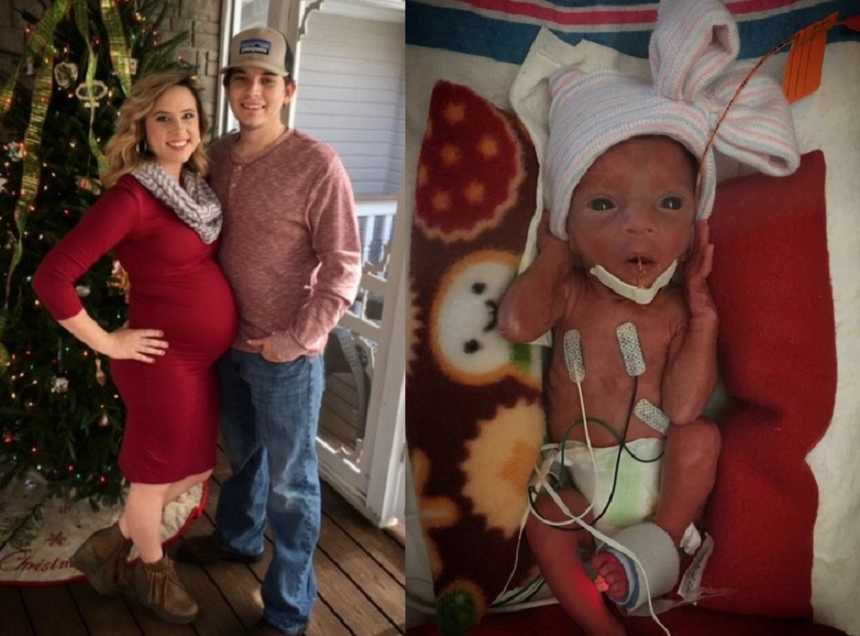 “My husband Nick and I decided early on in our relationship that we wanted to have kids while we were young. I had feared it wouldn’t be an easy process because my mom was never able to carry a child on her own. I was born via surrogate and my brother was adopted.

We didn’t expect to get pregnant right away but after nine months of trying with no results, I decided to consult my doctor. I was diagnosed with hypothyroidism and my doctor at the time decided to not run further tests. As each month passed, our hearts broke a little more. Our dream was to be parents and it seemed unattainable.

We waited four months before we decided to see a different doctor. This new doctor was very straight forward and recommended running some tests on both my husband and me. After waiting for what seemed like forever, we finally had some answers. In June, I started my first round of clomid. A few weeks later on June 30, 2016, we got a positive test!

For a few days leading up to Christmas, I had a pulsing headache. I regularly have migraines so I wrote it off as completely normal. That’s when I started to have major swelling in my face, hands, legs and feet. I wrote that off as just a normal pregnancy symptom. At Christmas festivities I was telling my cousin about this awful headache I was having. She had noticed the swelling as well and recommended I check my blood pressure when I got home. Sure enough, it was 174/116. We headed straight to the hospital, praying the whole time. I was only 28 weeks and 5 days pregnant. I remember telling one of the nurses that all I wanted was for my baby to be okay.

We had prayed so hard for so long. She was all I had ever wanted. The on-call doctor at my local hospital told us that I had severe preeclampsia. I was transferred to a hospital about two hours away from home that was better equipped to care for a baby that premature. I was closely monitored for several days, but my blood pressure spiked again. This time it was at 190/110.

Having a child in the NICU is terrifying. You don’t know what the road ahead holds as your tiny child fights to live.

But my little warrior princess exceeded the expectations the doctors and nurses had for a 29-weeker.

She was breathing on her own at 3 days old. At almost 5 weeks old, she was able to try and learn to drink from a bottle and was moved from her isolate to a crib.

Just a few days later, the doctor said, ‘What would you think about heading home in a couple of days?’ On February 11, 2017, we got to bring our sweet girl home! She weighed just 3 pounds, 12 ounces.

Since coming home, Blakely has had two hospital stays (one for a staph infection and another for febrile seizures) which absolutely terrified us, but reminded Nick and I how precious her life is. We thank God for trusting us with such a beautiful miracle.

Blakely Joy is now one year old and keeps us on our toes every single day. She is a 17-pound ball of sass, but we wouldn’t change a thing!

I always wanted to be the kind of mom whom my children called their hero. Instead, my tiny miracle has become mine.”

This story was submitted to Love What Matters by Katelyn Turvin, 22, of Auburn, Alabama. Submit your story here, and be sure to subscribe to our best love stories here.