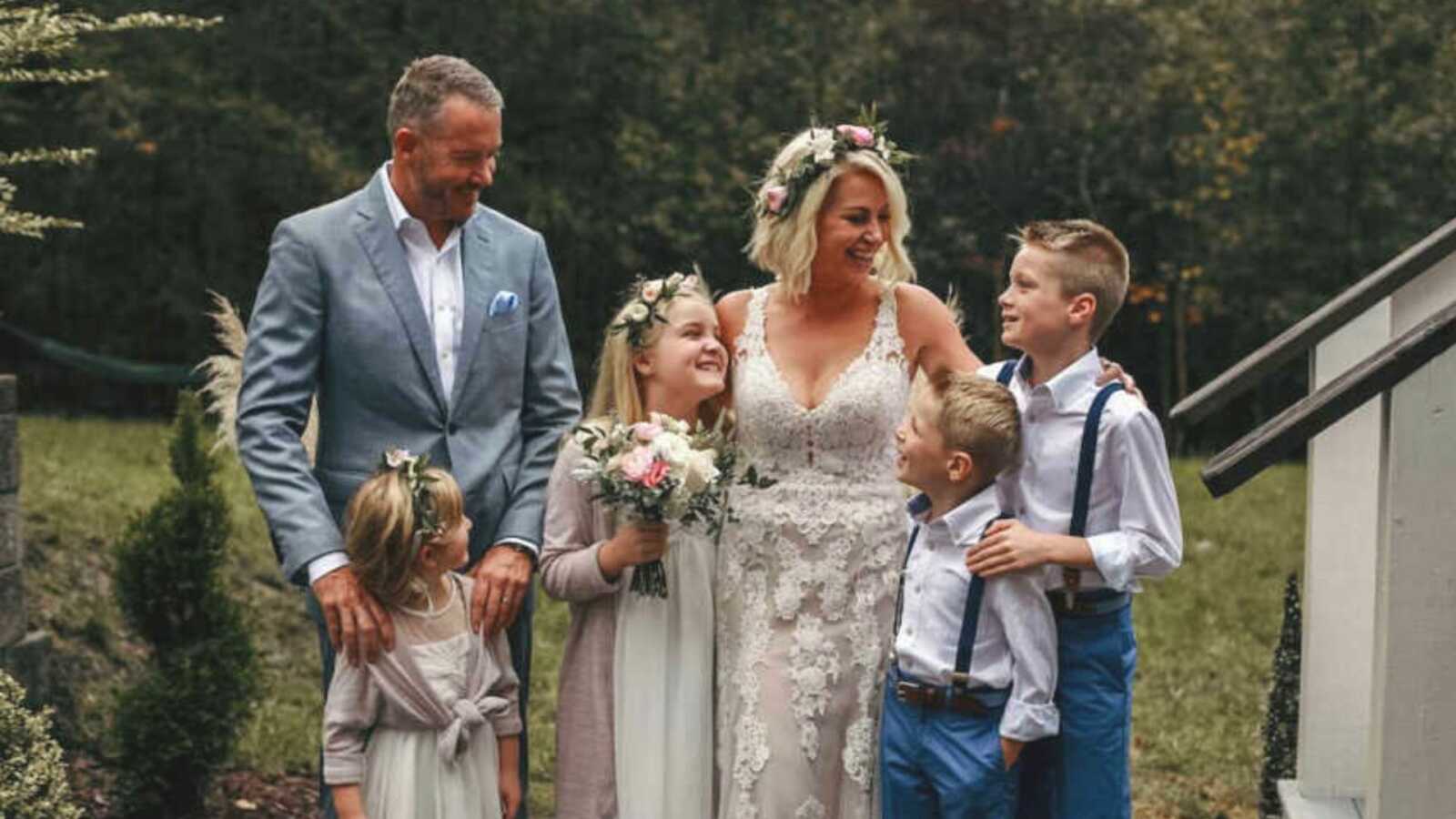 “I didn’t see my divorce coming.

Which is so crazy in hindsight. We had been in and out of therapy for years. We’d always felt more like friends than a married couple, and overtime that dynamic just became more and more unhealthy.

I found myself choosing work over family because it was just easier. I chose my friends over him. I chose girl’s trips over us. And eventually, we both chose other people over our marriage. But even with all of that, I still didn’t think he would leave.

We had two young sons, three and seven at that point. We even worked together! Splitting up seemed way too complex. Which is why I can see now in hindsight, him not giving me a choice about the matter, was ultimately a gift.

But at the time it was an absolute shock to my system. After an incredibly busy work project finally came to completion, he abruptly announced he was going to a hotel for a few days. I sat under a blanket on our couch for the next day, spiraling on how and what to do next.

I eventually moved into our guest room for the next month while I tried to wrap my head around the new situation, and specifically how I was going to afford it. I was so angry at myself for being so caught off guard! I had basically no money saved and no plan whatsoever.

Making It As A Single Mom

Things were fairly amicable, which I am eternally grateful for. They just felt very sad. I eventually pawned my engagement ring which afforded me three months in an apartment, while he got our house ready for sale.

I borrowed two twin mattresses from my sister and put them on the floor of a bare apartment. The apartment had a pool however, which the boys absolutely adored. They still speak so fondly of our time at that apartment, which I am forever grateful for!

In North Carolina, you have to be separated for an entire year before your divorce is official. Since neither of us were arguing over anything and we were splitting everything down the middle, our separation agreement was written up fairly easily.

When I had the boys for half of the week, I filled it with outdoor concerts, picnics, and pool days, being as present as I possibly could for them! My guilt was at an all-time high in this first year.

I knew I had been unhappy and less than present in their younger years, and I felt this divorce was a sort of punishment for that. I was determined and actually excited to learn to be an amazing mother to them in this season.

After three months in the apartment, I was able to buy a small townhouse for the boys and I. I was so proud of that little house! It was nothing to look at, but it was the first home I’d ever truly bought by myself. I slowly pieced together rooms for each of them by finding Craigslist furniture.

I was terrified of this new financial responsibility, but I knew I had to rise to the occasion. I took financial peace university classes, started reading self-help books, and began choosing podcasts about parenting over zoning out to music.

I remember ‘borrowing’ a large white poster board from my office and hanging it on the wall in my house. With a marker, I sectioned it into quadrants, and started grouping together things I needed to learn and start doing to be the healthiest woman and mom I could be, but also included things I needed to stop doing. I wanted to start meditating. I needed to stop drinking so much. I had lost half my 401K in the divorce, and I wanted to focus on catching back up. I wanted to be a more honest person and better communicator for my next relationship.

It was shockingly quiet and lonely on the days I didn’t have my kids. I was so glad I had a great career that kept me distracted during the day, but evenings were really difficult. I was very intrigued by the idea of online dating, as nothing like this existed 20 years ago when I’d met my husband my first month in college.

I was certain I did not want to date anyone with children though. I still felt so much guilt for what I was putting my kids through. I thought introducing another set of children would just be downright unfair to them. So for 12 straight months, I only met men who just didn’t understand my life. Or the demands of parenthood. It was so disheartening. I was also incredibly direct and upfront immediately with every date I went on! I’m sure it was a bit overwhelming, but I felt the need to start out as honest and open as possible. All my flaws. All my divorce ‘baggage.’

After a year, I finally decided to change my online dating parameters to include men with children. The first man I connected with was Nick. He had two girls of similar ages to my boys. He had been divorced for around two years. We texted and spoke on the phone for about a week until we finally met for dinner. All of the personal work I’ve been doing, all of the soul-searching, all of the bad coffee dates, books, meditation… led me to this right person at the right time.

I did my normal ‘blurt everything about myself’ for the first hour and he’s told me many times since then, he was shocked and incredibly appreciative and attracted to my complete honesty. We very quickly spent all of our kid free time together, and actually introduced the kids casually to each other within the first few weeks.

Two girls and two boys between the ages of two and seven, it was actually a lot of fun. Our co-parenting schedules naturally lined up pretty similarly, which was hugely beneficial. After a year of dating, we built our dream home together, sold my townhouse, and all moved in.

One of the toughest things for me was learning to parent together with someone again. I’m a pretty relaxed parent, probably too relaxed. Nick had higher expectations for the kids than I did, and that was really tough. It still is. We went to therapy a few times together to try and learn how to be the best ‘step’ parents we could be. We have a lot of hard conversations. Which is something I absolutely would have avoided in my first marriage.

One of the absolute best things though, has been learning to embrace the two to three nights a week we do not have any kids. It’s always hard at first, but we try to do our ‘chores,’ our date night, and any preparation we need for the week on those days, so we can truly relax and enjoy the times we have with our kids when they come back.

We both agreed we weren’t great spouses in our first marriage, and we talk often and openly about not making the same mistakes. And one of those was intentional time together, and being romantic. For the last six years, we have stuck to a weekly date night. NO EXCUSES! We take turns planning it for the other person, no phones are allowed, and we try not to talk about work or anything too heavy.

Our kids are now between the ages of nine and 14. We are navigating puberty, daily emotional conversations, high school and social media battles, all while trying to communicate delicately with their other parents. We are both aware our stepchildren have other parents, and we are there to be a support – but not to replace them.

It’s HARD. But for us, we both feel we got a second chance at a life! I still carry a decent amount of guilt, but it propels me daily to be present for my family.”

This story was submitted to Love What Matters  by Gretta Nance. You can follow her journey on Instagram. Submit your own story here and be sure to subscribe to our free email newsletter for our best stories, and YouTube for our best videos.

‘Can you make me love my husband again?’ The therapist said, ‘Not once has he acknowledged your feelings. All he talks about is himself.’: Woman finds ‘indescribable love’ after courage to get divorce

‘Did you leave your husband for him?’ I needed MORE! I came in so broken.’: Woman finds love after divorce, ‘I found someone who lets me be LOUD’

‘I said, ‘I’m going through an ongoing divorce,’ thinking he’d run. Instead he said, ‘Life is full of the unexpected. I’m here as long as you want me.’: Woman finds love, passion for music after toxic marriage 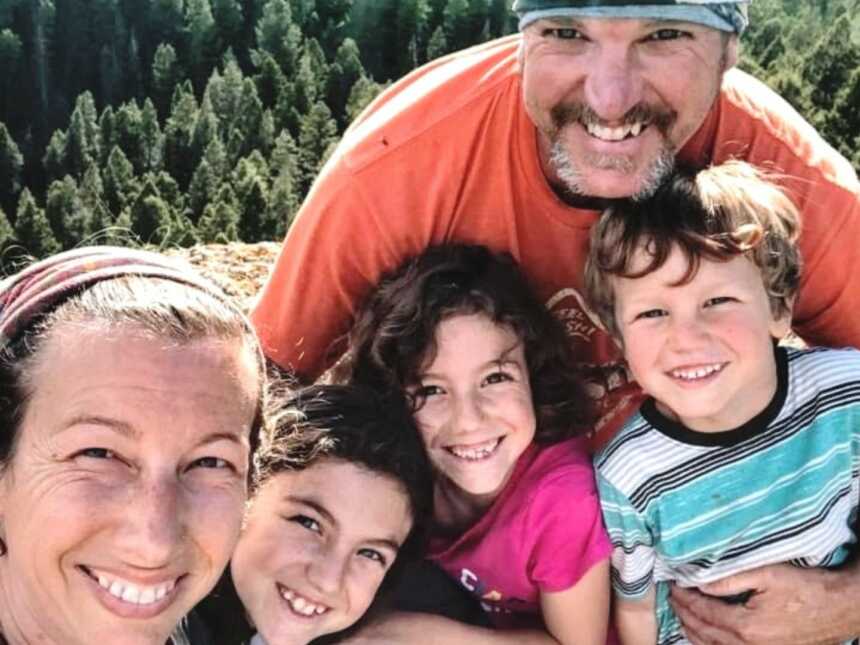