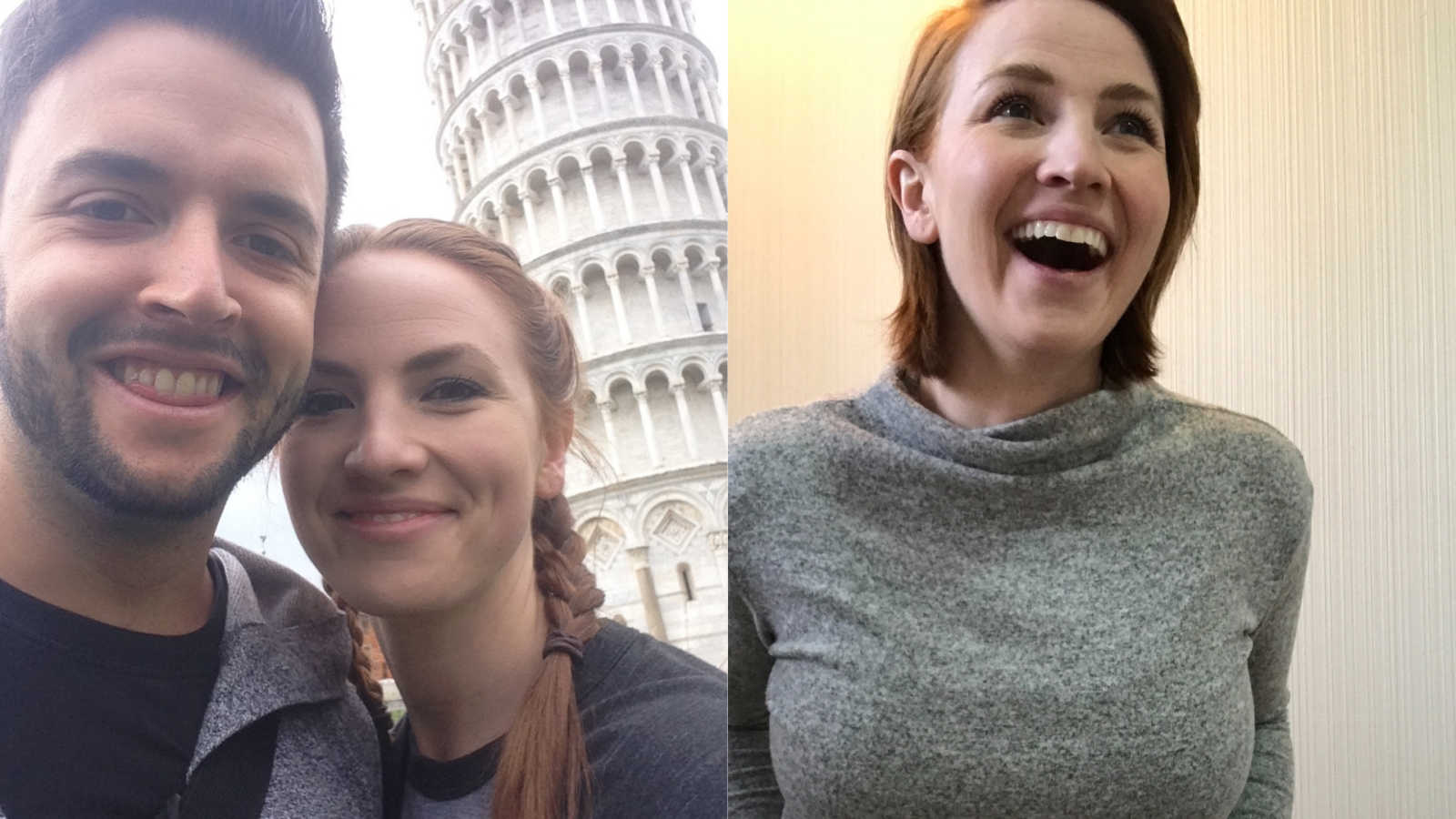 “I was raised on a cattle ranch in rural Canada.  I was taught to stay humble and if you wanted something to work hard. My best qualities still today.

I spent my 20’s attending university. Undergraduate in pharmacy, masters, and finally, a doctorate from the University of Toronto. I specialized as a pharmacist in cancer care. I know a lot about drugs but even more about chemotherapy and how to care for someone with cancer. I have the best job in the world. Being able to use my skills to help people in my community fighting cancer.

In 2016, at the age of 30 years old – life was exciting. We had just bought our first house and I was marrying my dream boy at the end of September. After our wedding we travelled to Italy and Greece for two weeks.

We did what everyone should do if travelling to Italy and Greece – we ate our way through the countries. Pizza, cheese, wine.

Needless to say, when we returned home, I had gained a bit of weight but nothing unusual. My husband and I are very athletic so I was certain the weight would come off quickly once we got back to our regular lifestyle of healthy eating and exercising. But that wasn’t the case.

Over the next couple of weeks, I didn’t lose any weight – I actually gained weight. The only other unusual symptom was heartburn. I had awful heartburn and had never had heartburn before. Chewing on tums several times a day – something was out of the norm.

Being medically trained, I usually have a pretty good idea of what’s causing my symptoms. In this case, I was thinking I might have an ulcer so I went to my family doctor. She agreed an ulcer was possible but some quick blood work revealed this was not the case. So I went on to get an ultrasound of my abdomen. The results sent my world into a spiral.

At 30-years-old, I had an ovarian tumor the size of a football.  Measuring 21 x 10 cm. My left ovary was completely unrecognizable. I was in complete shock. I laid down on my bed. Was this the end for me? Was I about to die? The rollercoaster began.

Because of my young age and the incredible size of the tumor, it was possible the tumor was benign (not cancer). There was hope. Over the next couple of days, I underwent tests to try to determine the type of tumor that was growing at such a rapid rate.

I was thankfully pushed up the waiting list for a CT scan, I sat in the emergency room of a hospital waiting for the results. Waiting to hear if this was cancer or not. My mom and husband sitting across from me. We waited. We all have that inner voice that tells us when something is wrong. Something in your gut. Mine was saying this news wasn’t going to be good. The gynecologist came in, sat next to me on the bed, and said ‘I’m sorry kiddo, it looks like it’s cancer.’

My mom and husband were shocked. How could this be? But when you are trained as a clinician, you don’t stop acting like a clinician when you become the patient. I began asking him questions about what they saw on the scan. Ascites. Metastatic disease. Any information I could gather to try to predict my chances of surviving. My chances of living past the age of 30 years old. I was back at the bottom.

Things moved rather quickly from this point. I underwent surgery where an incision was made starting below my sternum running to my pubic area. The largest incision possible to remove the massive tumor that had consumed my left ovary. My right ovary remained untouched. Thirty-seven staples to put me back together. And that was the easy part.

Chemotherapy was next. I was about to experience first-hand the treatments I had been helping so many other patients through.  I knew what was to come – which is both a good and a bad thing. I received 4 intense cycles of chemotherapy.

Each cycle was Monday to Friday, followed by a week of the most intense fatigue. Like nothing else. This fatigue is so intense that having a bath or moving from the bed to the couch is an enormous victory. I would then get one week where I was able to get back to some resemblance of living before I needed to start it all over again.

Life was being lived hour to hour and day to day. It was difficult to imagine life after cancer because you are just trying to hold your head up to get to the next day.

Chemotherapy came to an end in March of 2017.  I was technically cancer free but the fight wasn’t over. It took several months to begin to regain the physical and mental energy I previously enjoyed as a young professional.

My husband and I now enjoy checking things off our bucket list and living a ‘normal’ life. We are expecting our first child in early 2019. To be honest, when I was diagnosed with cancer, the possibly of becoming a mother was so far down the list of things I was concerned about. How could I even imagine bringing another life into the world when mine was set in such a fragile state. What an awful place to be. Being so vulnerable that you are literally in survival mode.

You might be wondering how is this possible to conceive a child after losing an ovary and having chemo. Because my right ovary remains healthy and the chemotherapy I received does not impact fertility the possibility to conceive exists. Turns out you really can put all your eggs in one basket.

This story was submitted to Love What Matters by Dr. Amy Smith-Morris of Saskatoon, Saskatchewan, Canada. Follow her journey here. Submit your story here. For our best love stories, subscribe to our free email newsletter.