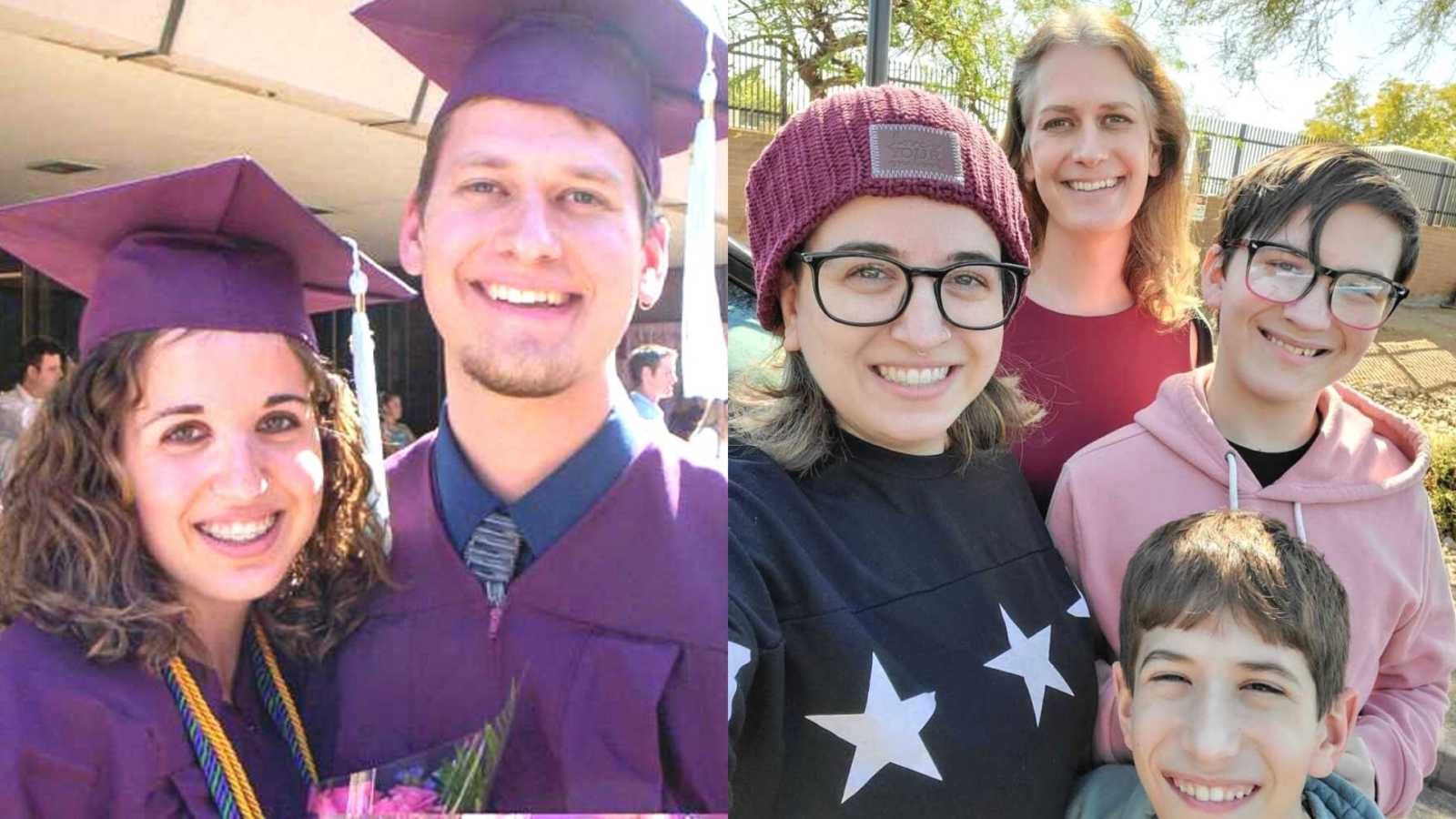 “‘One check or two?’ Something that makes me chuckle every single time. Before Sarah transitioned and we were presenting as a man and woman with two kids (basically, our life until four years ago), no one ever asked us this. Why would they? We clearly looked like the textbook American family.

You may remember our story, or if not, welcome! Sarah and I met in 2004 while in college. We fell in love, ‘U-Hauled,’ as the lesbians call it (look it up), and were married by 2005, all as a hetero (straight) presenting couple. We went on to have two sons (in 2007 and 2009), to whom she was ‘daddy.’ Fast forward to June 2016, when we each, separately but within minutes of each other, dropped bombs on our relationship…

Her, ‘I think I’m transgender, and want to transition to a woman,’ and me, ‘Well, thank god for that, because I’m a lesbian.’ We had officially come out to each other without the other knowing our private struggle. Nine months later, we came out to the kids (March 2017) and then the world (May 2017).

There are so many things we never thought twice about before coming out and our lives turning upside down. Granted, there isn’t a single thing I’d go back and change. Thinking of Before seems so distant, and almost like an alternate reality we were both living. As a ‘cis/hetero’ couple, we could go anywhere we wanted, do anything we wanted, and no one ever blinked an eye at us or looked at us twice. Now, this has completely changed.

While thankfully we’ve always felt safe where we live and spend our time, any time we plan travel or leave our ‘bubble,’ we suddenly need to make sure it’s safe, and we’re not placing ourselves in avoidable danger just because we’re a same-sex couple, and more specifically, because Sarah is a transwoman. Places we’d previously wanted to visit or travel suddenly are off the radar for us if our safety might be a concern. It’s interesting. Before, holding hands was just something we did naturally. Now, it’s still something that’s natural, but we also have to consider who’s around and what repercussions might be.

Stares are less, fewer people look at us, at least until Sarah starts speaking. Her voice is a lower register than ‘most women.’ She hates having to talk on the phone with strangers, because the conversation often goes something like this:

‘May I please speak with Sarah?’

‘Oh, uh…’ Then the conversation continues, often gingerly, unassured, and overly politely to the point where I’m gagging.

Before, no one ever asked us when we were out, ‘One check or two?’ It was assumed, because we appeared to be a man and woman, one check would suffice. Now, it’s rare that we go out and don’t get asked this…even with the kids. We often wonder what people are thinking about us, and what they think our relationship is, because let’s face it, who doesn’t play the ‘What’s Their Story’ game? The wedding rings don’t seem to give it away anymore.

We always wonder what people are thinking about the boys as well. One looks exactly like me, while the other looks exactly like Sarah. Their personalities are a solid mix between the two of us, but physically, we each have a clone. I can only imagine how confused people get, and a game we really like to play is telling people they are 100% biologically BOTH of ours. You know the meme of a woman with math floating behind her head? Google it. That’s the best picture I can paint you of people’s faces.

Another interesting walk we’ve taken is down Privilege Lane. Again, Before, as a man and woman, we could walk into Home Depot or a similar store and no one would talk to us. It was assumed we knew what we wanted and why we were there. Now, Sarah understands why I had told her years ago how much I hated going places like this. I was treated like a complete idiot, no matter how often I said I knew exactly what I needed and where it was. Or, the feeling of having to be careful when you’re out walking alone? She gets it now.

There are a lot of things she ‘gets’ now. We chuckle about it all the time. I can’t even count all the things she used to give me a hard time about that now, she either does herself, or ‘gets.’ For example, a LONG time ago, and I’m talking ten years or so ago, far before her transition, for some reason we got into this ‘argument’ about how you use the restroom as a woman, in a dress or skirt. You hike it up, right? She thought I was CRAZY, and that I was the only person in the world who did this, and everyone else on the face of the planet takes it off like pants or a jumpsuit.

Please. I give her crap about it now all the time. Doing the tight-jeans wiggle to get them on and adjusted? Ladies, you know what I’m talking about… another ‘Ooh, I get it now!’ Or the euphoric feeling you get ripping your bra off as soon as humanly possible? Yep. The hatred of going to a car dealership alone? Yep. Having ‘that time of the month’ where you want to be left alone and thrown chocolate (potato chips in my case, pickles in her’s), CHECK. I feel like our entire life is now spent in ‘Ahhhh, now you get it’ moments, which make us laugh a lot.

It’s been really interesting being on both sides of the fence. Not many people get to experience this. I still worry whenever she’s out alone. The statistics are terrifying if you look into them. There are countless bills in various Senates and Houses being pushed to allow taxpayer services the deciding factor whether or not they want to provide my wife with emergency services. I am terrified at the thought of her getting pulled over by a cop who will hassle her, or god forbid an accident where she needs emergency care and I am not there. I stalk her more than I should need to on Life 360, and not because I care necessarily where she is, but I care that she’s safe. It’s really not great on the anxiety level, let me tell you.

Her ‘big surgery’ is scheduled for this summer after its cancelation last summer due to COVID. While you can be trans any way you like, and surgery and/or medical transition isn’t a requirement by any means, I think we both are feeling a sense of security for when it’s all said and done. For her, for us, this is the right move, and we’re very fortunate to have it covered by insurance. It’s one more ‘safety net’ if again, god forbid, something happens.

She’ll look like what it says on her license. It’s terrible we have to think about it this way, but it’s unfortunately our reality. There is a constant fight over whether or not my wife should be given normal human rights the rest of us innately have. Not just her, me too. We fall into this weird umbrella of ‘Well, we were married pre-transition, so if same-sex marriage gets overturned, where does that leave us?’ All things we have to think about and worry about daily, but thankfully, less now than a year ago.

It’s scary out there, but we push through. We laugh, we cry, thankfully now, we can laugh more than cry. It’s important for everyone to look back and see how far you’ve come. Think back to your before. We all have one. Look what you’ve accomplished and overcome, no matter how small, to get to your now. It gets better. I promise. The light at the end of the tunnel will shine eventually. We can finally say we’re approaching ours. It’s within reach… but what a journey it’s been.”

This story was submitted to Love What Matters by Jenni Barrett. You can follow their journey on Instagram. Submit your own story here, and be sure to subscribe to our free email newsletter for our best stories, and YouTube for our best videos.

‘We kept our relationship a secret. ‘I don’t care how people view me, I just want to be with you.’ We came out as a couple, but I was still struggling.’: Transgender man shares love and coming out story, ‘Now we are a family of 6 and thriving’

‘Her mom came to parent-teacher conference with weary, troubled eyes. ‘Has she asked you to call her by a different name yet?’: Christian teacher’s ‘heart softened’ after she learns her student is transgender

‘I’m so scared to be trans. I don’t want it to be true.’ I’d stare at myself and ask, ‘Who are you?’: Young man goes through coming out process, learns he’s transgender, ‘I finally feel free in my body’