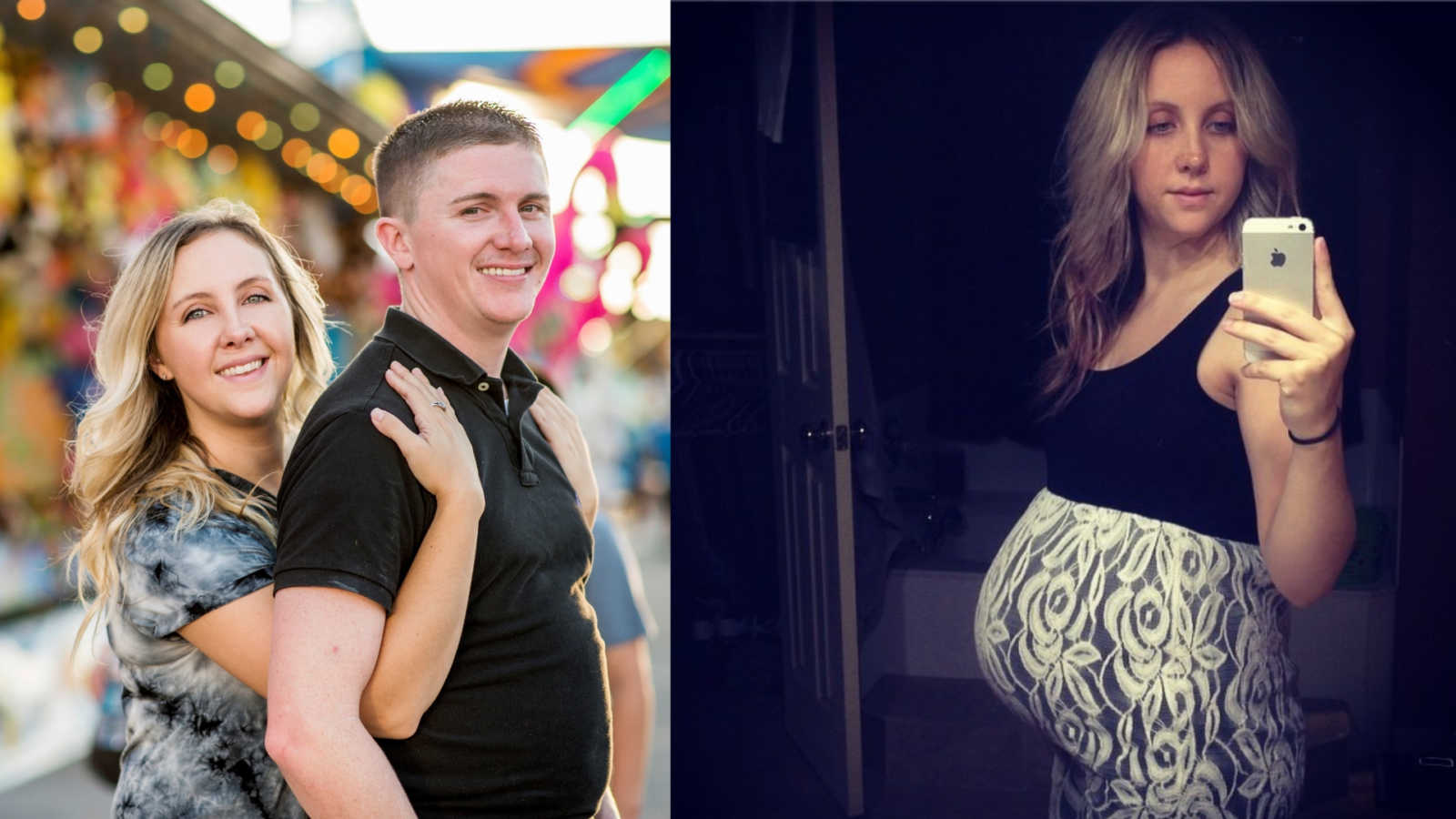 “It was just another pregnant Sunday. As a family, we were preparing however we could to welcome a new baby any day. We did every piece of laundry in the house, which seemed like 638 pieces and it might have been since we had a family of five at the time; we cleaned all day. I was exhausted and nauseous all day. I assumed it was because our new baby, Lincoln, would soon make an appearance because I remembered my three previous pregnancies ended in exhaustion and nausea.

My middle son and I went to the mall to go get an outfit for his soon to be new brother or sister. By the time we got home, I was so lethargic and nauseous I could barely move. I would call the doctor tomorrow.

It was midnight, maybe 1:00 a.m. and contractions started so I assumed that’s why I had just spent the entire day feeling so horrible. Fast forward twelve hours and I was delivering our very first baby girl. This was the moment I had been dreaming of ever since we knew we would have a fourth baby, but the excitement was fleeting. Our baby wasn’t crying and everyone in the room seemed frantic but also quiet. I’m really not sure what was said in those moments because it’s all somewhat of a blur, but I knew they asked my significant other to go outside with them. Our three boys were NICU babies so honestly I think it would have been pretty odd if everyone had stayed in my room and I got to cuddle a new baby on my chest. The doctor asked me what her name was and I told her Lincoln Riley Pool. This must have been a nice way to distract me from what was going on in the hall?

Riley came back into the room and I think for the sake of not worrying me didn’t say much. He said ‘I’ve watched enough Chicago Fire to know what’s going on isn’t good. They had to resuscitate her and put a tube down her throat.’  I told myself this wasn’t anything to worry about. We’ve been here before. Maybe not exactly here, but we’ve had two preemies and one rare genetic disease and everything turned out fine so this would be much the same. Shortly after the baby left our room the neonatologist came in and that is something that never previously happened. The neonatologist NEVER came to find me, they always let me find them a day or two into our NICU journey. He said ‘we aren’t really sure what’s going on, but the baby is very, very sick.  She’s critical. We are doing everything we can.’ Like Riley had watched enough Fire, I’ve watched enough Grey’s Anatomy to know that you never want to hear the line ‘we are doing everything we can.’

They let me go to the NICU in a wheelchair while I was still pretty numb, which is also something that hadn’t happened with my other NICU babies so I knew it was serious. When I saw Lincoln for the first time I think I was in shock. I had told myself so many times she would be okay and it was the nurses and doctors job to prepare me for the worst. I had no idea she would actually look so grey and lifeless. The neonatologist and nurses still didn’t have any idea what was going on or why she was in the condition she was in, but they were having me sign consent form after consent form to keep her alive.  She was immediately put into hypothermia to preserve ‘whatever brain tissue was left.’

I wondered what they meant by whatever brain tissue was left. Why are we preserving brain tissue for a newborn? They explained there was no way of knowing how long she had been without oxygen but that it had been long enough that she more than likely sustained brain damage. She had almost no blood in her body so they took my blood and tested it for fetal cells. The next day they came in and told me I had a large presence of fetal cells in my blood and we had experienced what was called a maternal fetal transfusion.  It’s a type of placental abruption where the baby loses his or her blood into the mom’s body. This is why I was so sick on Sunday. We don’t have the same blood type and when her blood started mixing with mine it made me extremely ill. Everything started making sense.

They started a full body blood exchange transfusion where they took out what little blood she had remaining in her body and replaced it with new blood. As soon as that was done they did blood transfusions and platelet transfusions because the blood wasn’t staying in her body. Her kidneys were shutting down and she was on full life support. The neonatologist kept coming in and telling me over and over that her condition was life threatening and that he had never seen a baby in this condition come out of it. She was having seizures and was highly sedated.  We were told by day 14 we would know the extent of brain damage and that if her condition would allow, she would have an MRI. Day 14 rolled around and she was stable enough to have an MRI done. I could hold her by now because she was weaned completely off of the ventilator and I held her all day impatiently waiting to hear the results of the MRI.

At around 8:00 p.m. a doctor finally came in. She sat down with the most serious, straight face and said ‘the MRI shows your daughter has a condition called periventricular leukomalacia. The outlook is not good. I wish I had better news. The neurologist will be in sometime to let you know more about what this means.’ WHAT?! Outlook not good?!  Be in sometime?! This was unacceptable. A few tears fell from my eyes and I started doing what everyone does and turned to Google. Man, what a terrible idea. When I decided I’d had enough, I held Lincoln tight and said ‘I promise we’ll do this together and I will make sure you beat the odds.’

The next day I bugged the neurologist as early as I could until he finally came and spoke to me. He explained that PVL is a result of brain damage from the lack of blood flow and oxygen to her brain at birth and that there is no treatment or cure. He said she would more than likely be blind, never walk, never talk, never be able to grasp objects, or live a normal life. Another neonatologist in the room said ‘we really need you to understand that her life will not be normal at all.  She will be dependent on you for everything. We probably need to talk about a permanent feeding tube.’

Riley and I left that conversation feeling defeated and beat down and when we left the hospital 14 more days later we still felt that way, but I never lost hope she would beat the odds stacked against her. She had already beat the odds by merely surviving and getting out of the hospital without a feeding tube. She was alert and smiley. She seemed like any other baby other than missing motor milestones.

Lincoln is now two-years-old and has had 464 therapy appointments. She is full of spunk, love, kindness, and strength.

She is still missing motor milestones, but what she lacks in motor ability she makes up for in personality.

She goes to school at the most magical place on Earth called Little Light House, where all of her friends are different than you and I. Some have cerebral palsy and epilepsy like she does, some have Down Syndrome, and a variety of other different conditions.

She just learned how to stand with the assistance of one hand and she’s scootin’ around in a gait trainer like nobody’s business. She is everything the doctors said she wouldn’t be.

She can feed herself, talk, and sing her ABCs. I do sometimes grieve the daughter I thought I might have, but my life is so much better than it ever could have been without Lincoln in it. When you read our story, don’t feel sorry for us or how different our life might be, but instead use us to give yourself hope for whatever it is you may be battling. If you’re ever given a diagnosis that’s grim and makes your days seem shorter or darker, remember us and remind yourself to not let a diagnosis define you or hold you back.”

This story was submitted to Love What Matters by Lauren George of Tulsa, OK. Follow her journey here. Submit your story here. For our best stories, subscribe to our free email newsletter. 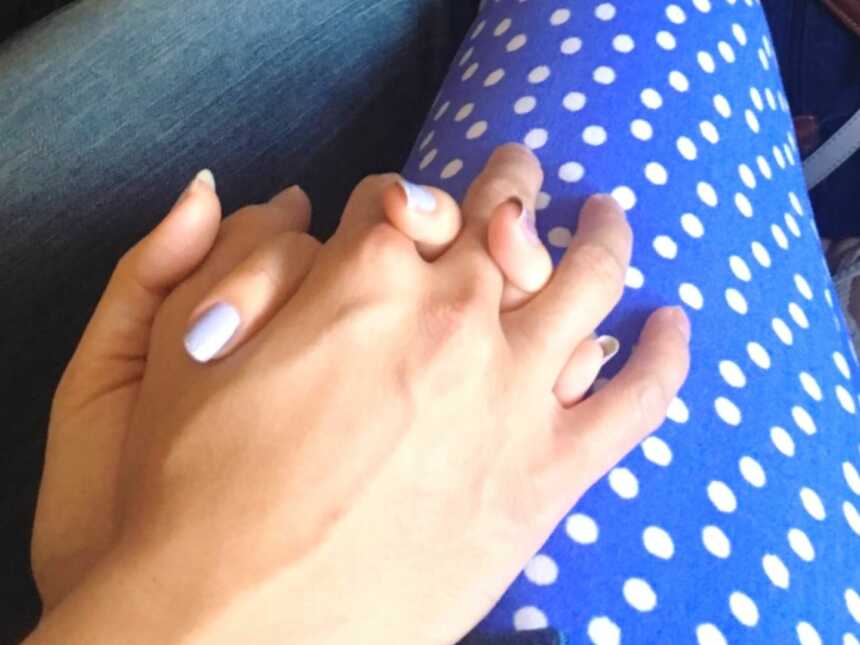 ‘Last night, he reached for my hand. It startled me, this painful reminder we rarely hold hands anymore since having our child.’: Spouse shares reminder ‘you are not walking the valleys alone’

“We aren’t newlyweds jet-setting the world anymore. Most of the time we have a smaller set of hands between ours now. But just like that, a simple touch melted the stoicism.”