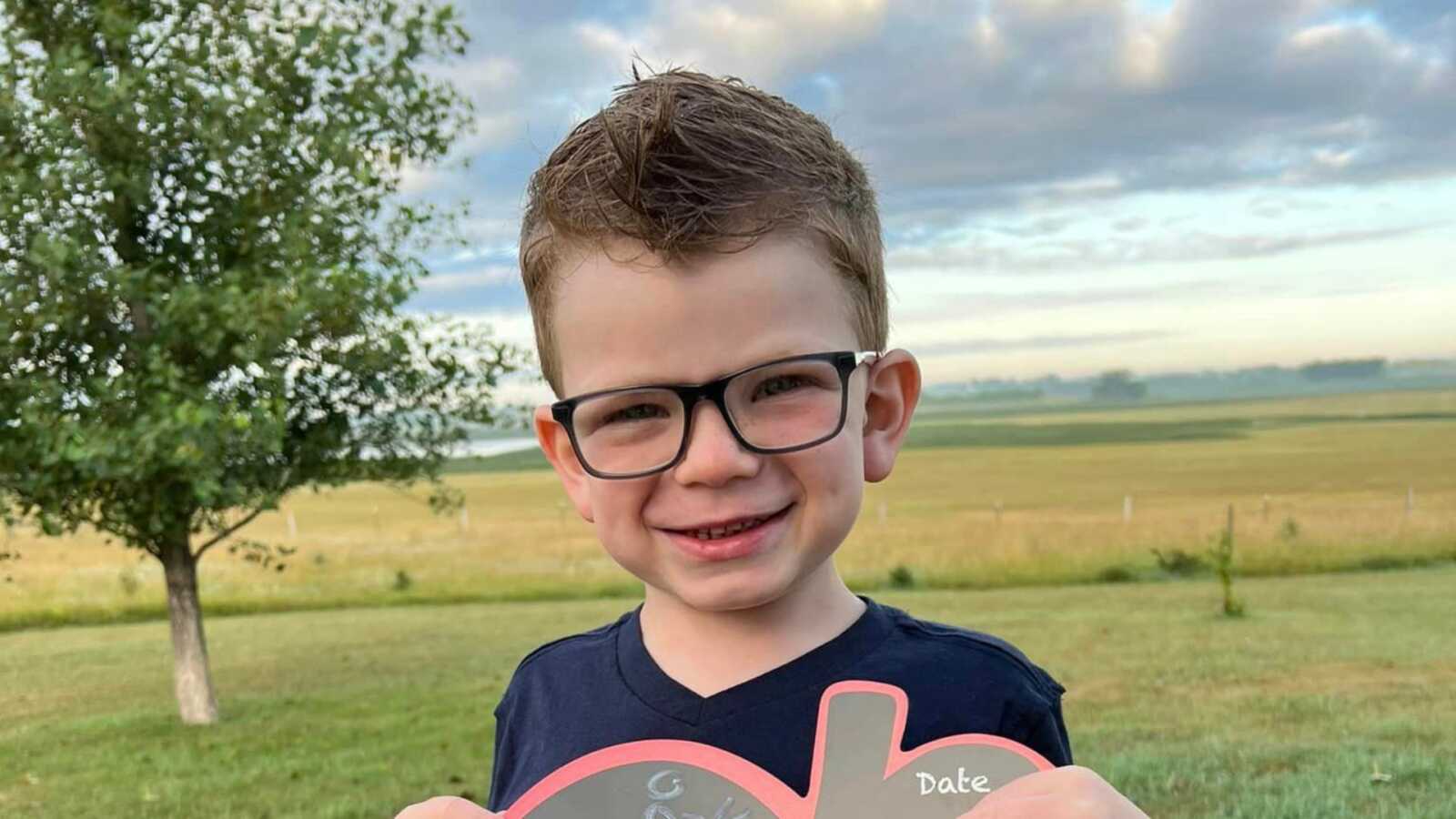 “Kellen and I were in toddler bliss with our 23-month-old son Kade and pregnant with our second child, not knowing if it was a boy or girl. We were over the moon to welcome our second son Crue to our lives in June 2017. With two boys under two, and a new puppy we loved our simple life in rural South Dakota enjoying our boys and going about our life.

As what we thought was normal, Crue started having ear infections, but never showed us signs of pain. Our dear daycare provider mentioned to us that she thought Crue had an ear infection, based on his random vomiting. Correct in her diagnosis, Crue battled on and off ear infections in his first ear of life and had tubes when he was 18 months old.

I remember vividly Crue not enjoying books, he would never want to sit with us and enjoy the bedtime story. Oh, just a second child we thought.

He had no interest in walking and he didn’t walk until 16 months (the only reason I remember this is I have a picture of him at Halloween and he was crawling in a skunk costume!) Again, we were saying he will catch up, his ears were an underlying issue as well. A healthy boy just doing his own thing on his own time.

Crue catching up will never happen with a diagnosis that rocked our world, shattered our hearts, and caused tears that have flown that could fill rivers. Sanfilippo Syndrome.

As we enjoyed the summer Crue was having unexplained diarrhea that did not accompany any other symptoms such as fever or illness.

He started Junior Kindergarten in August, we were thinking again that once he just starts school, he will catch up. Letter recognition, handwriting skills, coloring, and other 5-year-old concepts have been challenging for Crue.

As he started school at the end of August diarrhea continued to cause trouble, but enough was enough.

I called his pediatrician and they suggested that Crue was just constipated, and we should do a MiraLAX cleanout. I was very hesitant and asked for an appointment, as Crue has never been constipated in his life.

This was when the first x-ray was done. It did show some stool, but I believe it was from him not yet going to the bathroom that day. A small shadow was on the liver, but it didn’t raise an alarm.

We did a MiraLAX cleanout with a 5-year-old over Labor Day weekend… never again. We went back as this was not the solution, and another x-ray showed that his liver seemed larger than normal.

This time it was suggested Crue get an ultrasound done and his labs drawn. Imagine the Google searches that were happening on my phone.

His ultrasound came back that his liver was 16.7 cm but healthy, with no masses or damage shown. His labs were normal, with no indication of the liver function being impacted. For reference, an adult liver is about 14 cm.

This is part of why Crue’s belly is always extended. Alarm bells didn’t seem to be sounding yet from his providers, but for us as parents a different story.

We got a referral to the pediatric gastroenterologist, they did a very thorough exam of Crue and a comprehensive overview of Crue, not just his liver.

Our doctor was truly wonderful and was not concerned about his liver at this point but suggested we see genetics due to some of the concerns we raised with Crue’s development and milestones. We made a phone call to the U of M to speak with their liver doctors, and they came back and said to wait a year to re-evaluate.

This period of unknowns was filled with anxiety, endless research and just wanting an answer! About 3 weeks later we met with Dr. Li, she is now Crue’s princess at the Castle (Sanford Children’s).

Genetics appointments are not for the impatient. A very long day, first meeting with the genetics counselor and going through a family tree from anything to everything. Then an extremely comprehensive exam and conversation with Dr. Li.

We told her everything about Crue, making sure not to miss anything that she may or may not find helpful. We shared a list of our concerns.

That day we took labs and a urine sample. I asked if it was related to a metabolic disorder, such as Hunter’s and she said there was a possibility.

Sanfilippo NEVER showed up in any of my research or thousands of google searches. This was not on our radar. This was not something our child could have.

We were told not to Google Sanfilippo until we met with the doctor the next day, any parent would never take that advice. I felt physically ill, with tears that didn’t stop for days. We were broken.

Sanfilippo Syndrome is a neurodegenerative disease that is like Alzheimer’s in children. Crue will lose all the skills he has gained in his short life, suffer seizures and movement disorders, and eventually die in his teens.

Since Crue’s diagnosis, all the challenges he’s had in his 5 years of life had an answer. A devasting answer of Sanfilippo.

His speech is delayed and often Crue has a strong stutter. Sanfilippo has affected his ability to learn and school for him will never be the same. It has been gut-wrenching for our family.

You see five years of your child’s life. You think about his first t-ball game, his first day of kindergarten, his first basket scored, his first solo at the Christmas concert, his first date, and a future spouse. The dream of them becoming parents one day.

A family of 3 boys you imagine them growing up together. Kade (7), Crue (5), and Kai (14 months) are the best of friends. They race through the house, wrestling, and throwing any ball they can get their hands on.

Not only will we lose a child, but they will also lose their best friend, their brother.

All we ever wanted was to raise good, kind humans. Kellen and I imagined all the games we would be attending, and the countless hours spent in the bleachers.

Kade and Crue Bucknell were on the same starting lineup with Kai waiting his turn until he was old enough. The Bucknell Boys people call them, but one day one of those Bucknell boys will be in heaven.

That is all taken away with one sentence, ‘Crue has Sanfilippo Syndrome.’

I write this sentence tonight in tears after learning that another sweet Sanfilippo child gained her angel wings. News like that hits hard for anyone, learning of a young child’s death, but when your son has the same disease, you collapse.

The tears fall hard, you break and you grieve for not only their family but for yours. I HATE this disease.

We wait, we hope, we pray, and we fight for someone, somewhere out there that will care enough to help fund clinical trials and save these children. If money was no object, would we find something to help their quality of life.

Will we find a cure in Crue’s lifetime? I’m not sure but we can fight like hell.

People have pointed out CRUE = CURE. An Anagram, words or phrases formed by rearranging the letters of another word or phrase. A sign, a trick, a God-wink, or just an easy way to help raise awareness for Crue. Cure for Crue.

Sanfilippo Syndrome is caused by a single gene defect that leads to a lack of a necessary enzyme in the body. This lack of enzymes results in the build-up of toxic storage in every cell and is especially harmful to the brain.

This build-up causes devasting effects, such as increasing intellectual disability, loss of mobility, loss of the ability to eat, seizures, movement disorders, and eventually early death, often before the second decade of life.

As we enter 2023 we are faced with so much uncertainty but abound in hope.”

‘How can something this terrible exist?’ He had a fever for 105 days. This is our new reality.’: After son’s Sanfilippo Syndrome diagnosis, family raises money for cure, ‘Time is precious’