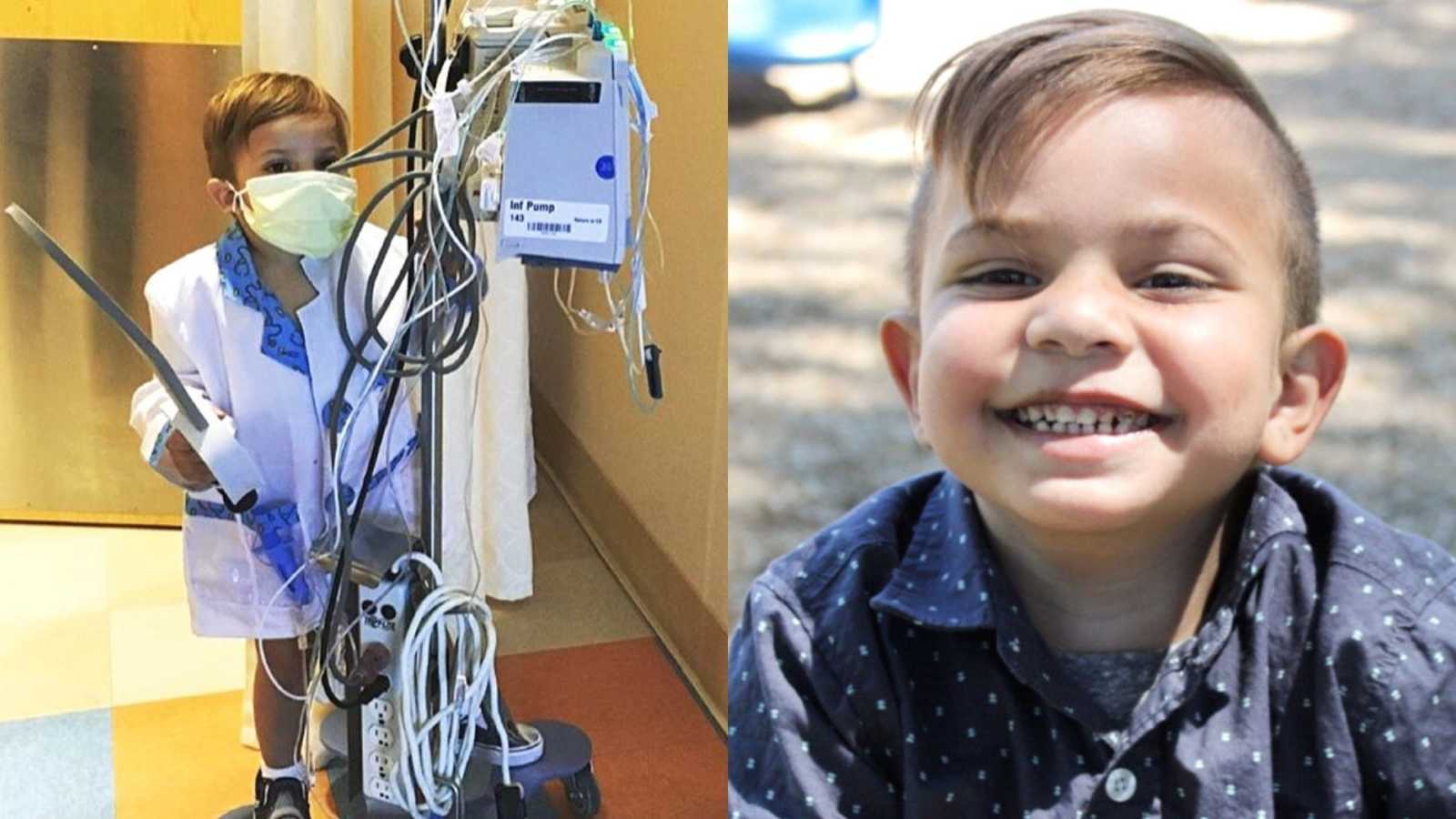 “Meet Carter, aka C-Money. He is currently eight years old and loves to build Legos, chase after his sister, Sophia, while playing tag, and is overall a big ball of energy and love! At first glance, he may look like a typical child. However, Carter is battling two rare and fatal diseases.

When Carter was just shy of two years old, we found out he had chronic pancreatitis. This diagnosis came after searching for an answer to why he had unexplained pain for weeks and 105 fever for five consecutive days.

After a fourteen-day hospital stay and numerous tests, x-rays, and scans done, he would leave the hospital with a central line and strict instructions to only have water and ice chips by mouth. We would later be told a CTRC gene mutation causes his chronic pancreatitis. We were relieved to have some answers but did not realize until later this mutation was extremely difficult, and he was the only one with this any of his doctors or their colleagues knew of.

The next year and a half our life surrounded dressing changes, hospital stays for fevers, and daily TPN and Lipid setups. Everything needed to be handled with care and sanitized and appropriately sterilized at all times. Anytime he had a temperature of 100.3 or higher, we immediately had to go to the hospital and would be there for a minimum of three days to rule out a line infection.

As you can imagine, it was a challenging time. Carter went from speaking two-word sentences to having his vocabulary drop to less than ten words. All of this was due to his constant hospital stays, which over the past six years has been over 350 days. He became extremely depressed, and it was beyond heartbreaking to see our sweet, joyful little boy do a complete 180 before our very eyes. Concerned, we brought it up to our primary care doctor, but due to having no other signs or symptoms of anything else and were told, ‘don’t worry, he’ll catch up.’

During the summer of 2015, we went to an appointment with our GI. He saw Carter starting speech, occupational, and physical therapy all within the past two months. He then noticed he was still not potty trained and mentioned it to me. ‘Carter’s three and not potty trained?’ I laughed and tried to make light of the situation. I said, ‘Oh, you know boys, they train later than girls.’ His reply was, ‘You are probably right. However, there are diseases out there that cause regression. I would like you to see a geneticist and make sure we leave no rock left unturned.’ It was at this time I realized there might be a possibility Carter would not catch up with his peers.

The rest of that year was extremely difficult for our family. We did meet with our geneticist and started the process of searching for answers. However, it was quickly put on hold as Carter’s pancreas became a more significant issue. Because he is the only one we know of with this CTRC gene mutation, we are treating and managing his symptoms as they come.

That winter, we would have our longest stay ever at the hospital: 42 days to be exact. After an ERCP procedure and stent placement, we were sent home with a PICC line, TPN, and Lipids. Carter’s only nutrition would be that for the next six months. Once we were able to catch our breath again and get his pancreas troubles under control, we met with our geneticists once again. I will never forget the first time meeting his geneticist. He reviewed Carter’s chart, walked in, and said he thought Carter had Sanfilippo Syndrome within a minute or two.

‘Sanfilippo Syndrome? What? What is Sanfilippo Syndrome?’ Our doctor went on to explain this genetic disease is caused when both parents are carriers. Many times parents do not even know they are a carrier for this awful disease. These children do not make the proper enzyme needed to break down long sugar molecules like you and I. Due to that missing enzyme, these children’s bodies cannot dispose of the waste. It builds up into toxic levels that eventually overrun their body and causes rapid regression.

When these children are younger, they usually hit all of their milestones on target. Typically it is not until around their preschool years you might start noticing they are falling behind their peers with speech and other skills. They may have behavioral issues and other symptoms that mirror autism. It is not uncommon for these children to be diagnosed with autism before getting a formal or proper diagnosis.

Children with Sanfilippo Syndrome will lose all of their skills, such as walking and talking. They will forget people places, things, and develop seizures. It is best described as a childhood version of Alzheimer’s. No one has ever survived Sanfilippo, and many of these children pass away in their mid-to-late teens. I remember leaving that appointment feeling defeated. I told my husband on the drive home, ‘How? How is there something this terrible that exists, and we never knew about it?’

To test for Sanfilippo syndrome, a simple urine test is typically sufficient, but Carter’s test came back a bit odd two different times. In light of that, our geneticists thought it would be best to have a genome done. This test is where they took Carter’s, my husband, and my blood to get a definite answer. In May 2016, Carter was diagnosed with Sanfilippo Syndrome Type A.

When receiving the diagnosis, our hearts broke. We thought his chronic pancreatitis would be the hardest thing we would deal with as parents. Yet, with one phone call, our world was again turned upside down. Within seconds we realized this was our new reality, and we would see our sweet, loving, vivacious little boy regress right before our eyes and we would more than likely outlive him. No parent should ever outlive their child.

Every day since diagnosis, our family has been determined to educate people about this terrible disease. We genuinely believe with awareness, there will come a cure. I cannot tell you how many days and countless hours we have spent coming up with ideas and ways to raise funds and awareness for Sanfilippo Syndrome. Since Carter’s diagnosis four years ago, our family has raised over a million dollars that have all gone to research and to get trials and treatment options for these children battling Sanfilippo.

Without our fantastic GI following his intuition and pushing for answers, I am positive Carter would still be one of those children who go misdiagnosed. It may sound a bit cliche, but we are incredibly thankful we found out early on. Since receiving his diagnosis, we have been able to make memories together as a family. We were also able to get him into early interventional therapy, which we believe played a significant role in why he is currently doing so well. Thank you, Dr. Kim, for giving us the gift of time!

1.) Time is precious, and you should never take it for granted. Most people would wish for more time if they could. So make sure to spend your time wisely with those you love and cherish.

2.) Inclusion matters! Everyone has a gift, and you need to be open and willing to include them to let their gifts shine, though.

3.) Everyone is battling something none of us know anything about, but kindness changes everything. Maybe you have seen that mother trying to get her items while her child may be having a sensory overload. You know she is trying her best, is stressed, and trying to defuse the situation as quickly as possible. A simple smile and, ‘you’re a great mom and doing a wonderful job’ means more than you could imagine. You may see her tear up, but know it’s because your kind words and positivity were what she needed to finish her errand.

We live every day by Carter’s motto — live today, hope for tomorrow. Even though every day may bring a struggle, it’s what you do the next day to make it a bit better and brighter! If you would like to keep up with our day-to-day, please feel free to connect or follow us on social media. We hope to ‘see’ you soon!”

This story was submitted to Love What Matters by Jen Sarkar from Los Angeles, CA. You can follow their journey on Instagram, Facebook, and YouTube. Do you have a similar experience? We’d like to hear your important journey. Submit your own story here. Be sure to subscribe to our free email newsletter for our best stories, and YouTube for our best videos.

‘He went into a silent seizure. We heard ‘code blue’ over the loudspeakers. ‘If it’s his time, let him go.’ My mama heart just knew.’: Mom loses son to fatal Sanfilippo syndrome, ‘God entrusted me with the most beautiful human’

‘My heart hammering, I answered the phone. ‘It’s very serious, there’s no cure yet.’ This disease takes everything.’: Mom raises awareness about Childhood Alzheimer’s after 18-month-old diagnosed

‘My sweet boy, oh how I wish we could bring you home. I cannot fathom why you were too sweet for this world, and meant only for heaven. I yearn for the day to hold you again.’