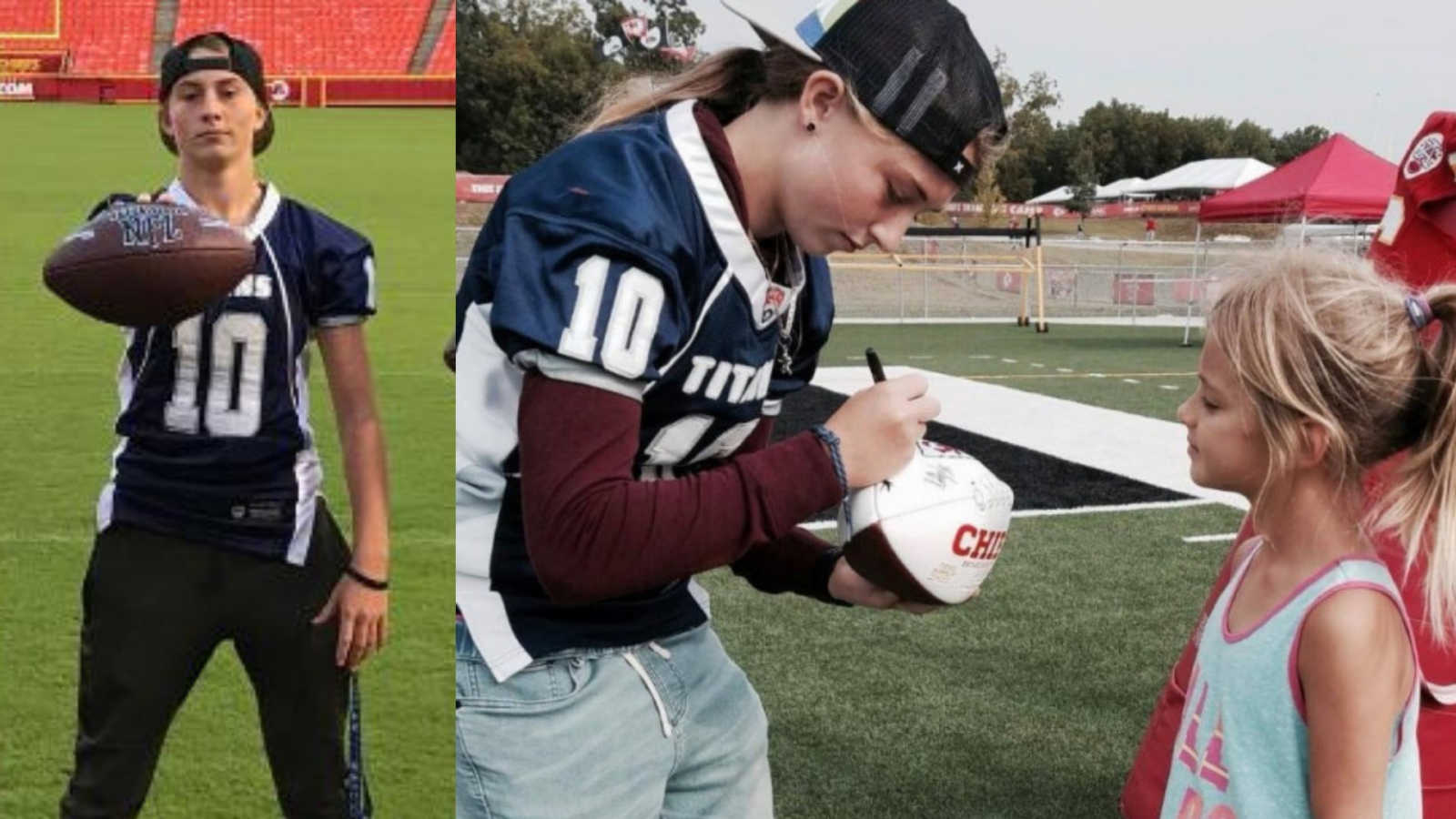 “My name is Brooke Liebsch. I am 18-years-old, a Senior at Liberty North High School. I recently graduated to pursue my love of football. I started playing Pop Warner Football in 2010 as a Wide Receiver and Cornerback. I continued that for three years. In 2013 I was playing catch with my coach and he noticed I could throw a football really far. From that point on I was the new Quarterback. That has been my position for the last four years. I was also the first girl to make it to the U.S. National Team Development Games with 350 boys.

My position in high school football was quarterback for my High school boys’ team, the Eagles. I played with them my freshman, sophomore and junior year, also lettering in football, the only girl to do that at my school. Since I was 10, all my teammates have  been boys. I was never given special treatment playing with the boys. I was treated like everyone else from conditioning, to practices, to games.

Fast forward to the Women’s Football Alliance, they currently roster 70 teams for the upcoming 2019 season.  I started out watching the girls play, calling plays, and traveling with the team in Kansas City.  I decided I didn’t want to follow, I wanted to lead and play with these truly inspiring women. The problem was I was only 16 at the time and you had to be 18 to play.  So I went to my parents and we talked with the WFA, as long as my parents would sign for me I was in. I am the youngest girl to be a part of the WFA. For two years I played for the Kansas City team. For the 2019 season I will be traveling to Denver Colorado to play QB with the Mile High Blaze.  I am excited for my new adventure and to see where it takes me.

The Mile High Blaze just did a commercial for Adidas and it had Von Miller in it.  It’s a step in the right direction getting Women’s football to the forefront and that we play tackle too. It’s a very expensive sport for us with fees in the $700 range for a season plus equipment and travel its expensive. We have to PAY TO PLAY. We start our own fundraisers and get sponsors to help with the cost.

I have had a documentary done with Producer Barnaby Roper called ‘My America.’ I am also a brand partner for No Joke Football. Then something I never dreamed of happened. I met my idol Patrick Mahomes of the Kansas City Chiefs. It was such an amazing and inspiring moment for me.

Then December 30 I made my way into a NFL commercial that is airing now during the football playoffs:

I could not be happier in the direction I am going. I recently returned from Las Vegas where I was hand picked to play in the Women’s Hall of Fame game.

My whole football career I have had doubters, but that has never stopped me from playing the game I love. It is also important to have support. I have had the support from my parents from the 1st day I put on a pair of cleats and stepped onto the turf field. If you ever doubt you can’t do it, I am here and proof you can!  It is important to have someone who can talk you through your struggles especially the ones I have faced in a male dominated sport.

I have spoken at some Play 60 events for the Kansas City Chiefs.  I definitely have a lot of those young minds following me;  sometimes I get messages from their moms to see if I could send them some encouragement for something they’re working on. I have had a mentor, and one thing I will say if you are going to be a mentor. Be it, do it, breathe it. There are so many that look up to you, and you always want to be there for support. Someday one of these girls will see me and say ‘because of you I tried, I did something I didn’t think I could do, I am a winner, thank you.’ When that day comes I will be complete. I always say I am going to keep doing what I am doing till I no longer have to introduce myself.

A favorite quote of mine: ‘Don’t quit. Suffer now and live the rest of your life as a champion.’ – Mohammed Ali

I am not sure what my future holds but there are more women prominent in the NFL today than ever before. Who knows, maybe one day I can take that field as a coach, or trainer.”

This story was submitted to Love What Matters by Brooke Liebsch. Follow her journey on Instagram. Submit your story here. Subscribe to our best stories here.

SHARE this story to empower young women in sports and in everything they do.