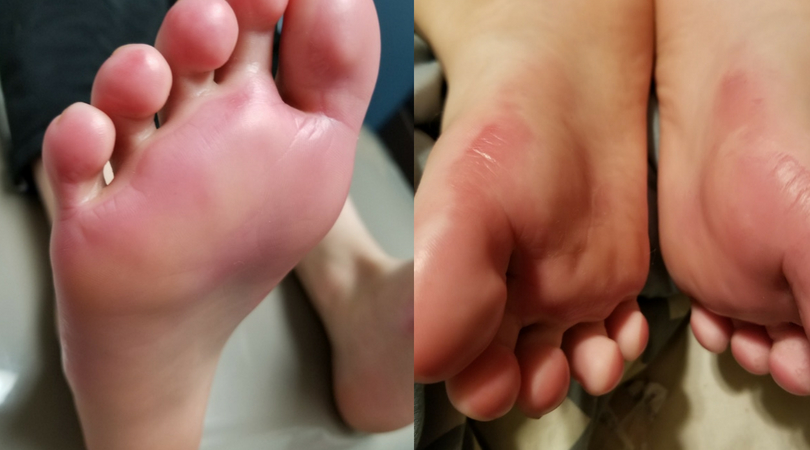 “My son Peyton is 9-years-old. On June 24th, his shoes got wet, he had a water day at school. Peyton did have socks on. He returned home that night and told me his feet hurt.

I looked, and they were red, but I thought they were just cold. The next day he came in from being outdoors saying his feet were really burning! I looked again and they were twice as red, blistered and he was in a lot of pain.

I called the doctor the next morning, his pediatrician sent me over to a foot specialist who had asked a bunch of questions in which his shoes had stopped working which was a clue it was his shoes that gave him chemical burns.

Peyton developed 2nd degree chemical burns from his Sketcher lightable shoes! Apparently when they get wet the batteries release a chemical causing children’s feet to burn. Our Doctor had seen this kind of burn once before.

My son is a trooper. He is as tough as it gets. It was the first day of summer vacation and he has to have his feet wrapped and is unable to play with his friends or brothers.

The doctor told us to treat it for about 3 weeks of using Silvadene cream and tomorrow he will be receiving a steroid for the next 2 weeks.

I was not warned or had any idea that this could happen! I mean they are shoes made for kids. We are located in New York, and my husband and I have 9 children altogether.

We have always bought Sketchers and never have had a problem before. This specific shoe was ‘Rayz.’ They also had an on and off switch.

If parents buy these I recommend they do not get them wet or jump in puddles. I know kids love them because of the cool lights but be careful! We noticed there was a connection with his burns and his shoes when the shoes stopped lighting up.”

This story was submitted to Love What Matters by Sherry Foster of New York. Submit your own story here, and subscribe to our best stories in our free newsletter here.