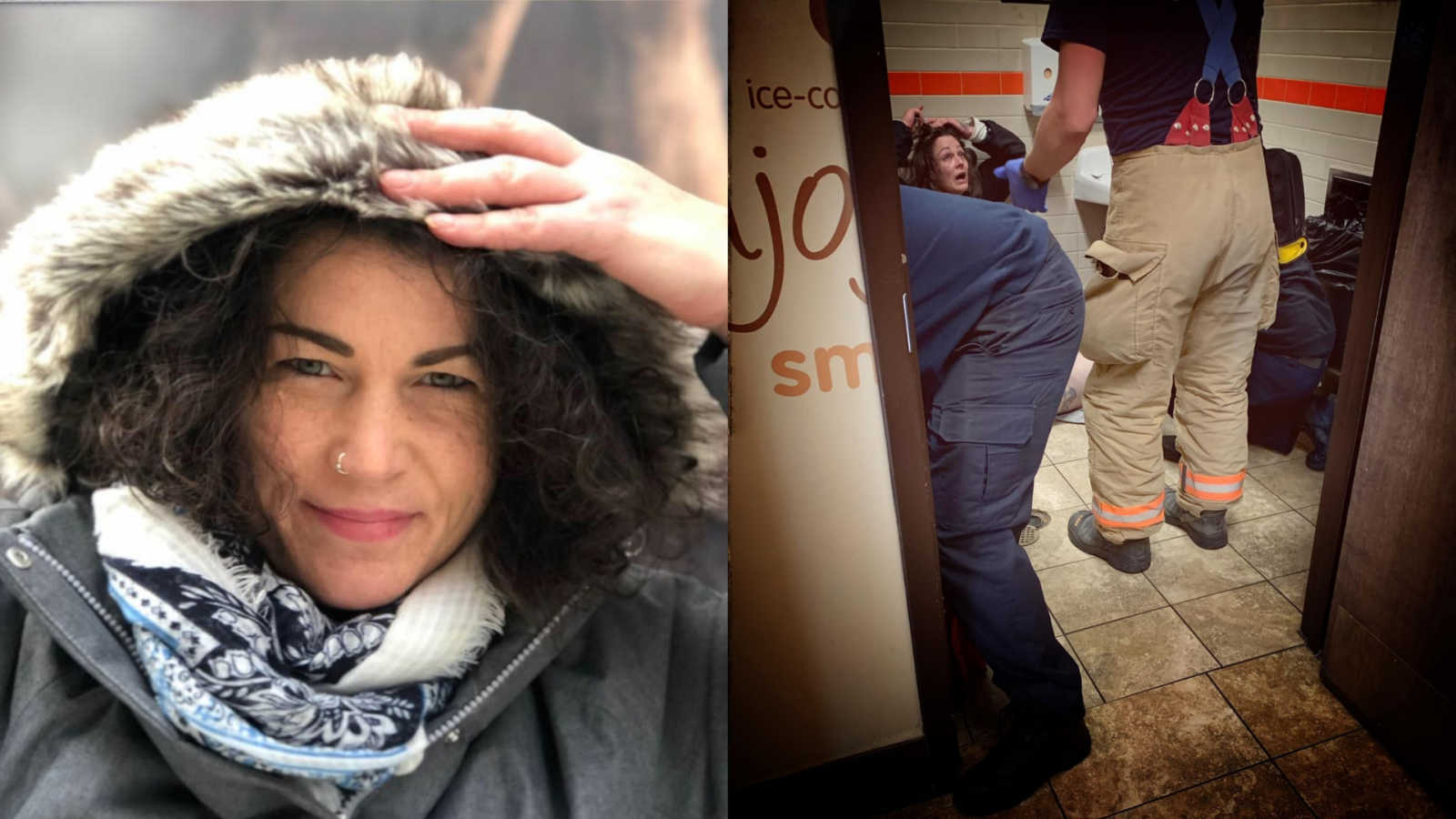 “It was the Saturday before this past Saint Patrick’s Day. My sweet love and I entered a Dunkin Donuts after seeing the Holyoke Road Race so he can use the bathroom and I can grab a coffee. He walks over to me and says ‘the door is locked and the person has been in there a long time.’ In hindsight I believe my sweet love came to me because he knows I used to shoot heroin in public bathrooms, including the very bathroom he was trying to get into, multiple times. I walked over and knocked on the door.

There was no answer. I knocked again, harder this time. No answer. I ran over to the counter to ask the employees to open the door and explained someone might be overdosing in there. She got her keys and when she opened it it she seemed to freeze and look to me for help. I ran into the bathroom to see a half naked man completely slouched over on the toilet. I’ve seen too many bodies in that position. I’ve been that body in that position, but I never died. I wasn’t taking the chance with this guy. I ran to him and yelled at him, rubbing his back as hard as I could without punching him while holding his head up. I have punched someone to bring them back from an overdose before Narcan was available, but it was someone close to me. I suppose if it came down to it I might have started punching this guy. He was in bad shape. His lips and face were blue and he was completely unresponsive. Sadly, I did not have any Narcan with me so I just kept calling to him, screaming. I was doing everything I could to force life back into him. Nothing seemed to be working.

Finally, a woman came into Dunkin Donuts to get coffee and saw the commotion. As if a miracle in itself, she rushed in, looked me in the face and asked if I needed Narcan. Yes, please! She approached the man and administered the life saving drug Narcan is. She and I then laid his limp body on the ground, trying not to drop him, and we just kept trying to push life back into this human being who neither of us had ever seen a day in our lives. But anyone who was watching us might have thought he was our brother, or family. We were both passionate about not letting this man die.

She sat over him trying to give CPR while I laid on the floor next to him just two inches from his eyes, watching as they rolled into the back of his head. His lips were so blue. Narcan doesn’t always work with one dose, but that was all there was to give him and paramedics were not there yet. No one knows how long he was in the bathroom before we discovered him. There was a moment when I thought he was gone for good and I remember thinking to myself, ‘not like this man. Not like this.’

She and I kept at it for what seemed like an hour but it was probably just a few minutes. She kept doing CPR and I started to rub HER back. As I reflect on that moment it was almost as if I instinctually knew the more life we kept trying to force into this lifeless man, the less energy we had for ourselves, and with her doing CPR, she was putting in some massive effort. WE weren’t giving up. I grabbed some cold water to put on his face and I yelled into his ears, trying to speak to whatever part of him that could still hear me, if any. I can remember lying on the filthy floor and thinking how many times I could have died on a hundred filthy floors from Hartford, VT to Hartford, CT, often stopping in Holyoke on our way down. At that moment I found myself yelling to him, ‘YOU ARE WORTH MORE THAN THIS’ over and over again. And I cried. She was crying. Finally, the EMT’s arrived and as they came into the bathroom the man started to show a sign of life. He was likely dead for a few minutes, but has been blessed with another chance.

I want to say this man is lucky that my sweet love had to use the bathroom. He is lucky that with my experience, my sweet love knew to come to me when no one answered the door. He is even more lucky the woman came in to get a coffee at that moment, and happened to have Narcan with her. But when the police approached each of us asking if we were with the man who overdosed I think we all realized what I knew right away after looking at this man for as long as I did. When you are at the point where you are using your heroin in public bathrooms it is usually because you have no place left to go. It’s because you’ve burnt all your bridges and by this time the only homes you are waking into are your dealers homes, and street junkies don’t usually get too far into those houses either. I knew he had nobody there with him. He appeared to be dirty, homeless, alone and beat down- no doubt from a life of constant suffering on those unforgiving streets- a life I am all too familiar with and am not at all too far away from.

I know. My sweet love knows, and the woman who helped to save his life knows this man is lucky to be alive. But I can’t help but wonder if the man FEELS lucky to be alive. Will he take this chance he has been given and learn how to live until he wants to? Will he want to live before he dies again?

I did not have my Narcan with me, and I regret that. So hear me out friends. If discovered in time, Narcan could very well save the life of anyone overdosing on Heroin, Fentanyl, Carfentanyl or any opiate. Please remember these numbers when making the choice to carry Narcan:

In one year over 70,000 people died from overdoses. The majority of those overdoses are Heroin/Fentanyl related. While the largest demographic of opiate overdoses used to be that of African American males from inner city projects, the current largest demographic dying from overdoses are young white males and females, age 20-45, many from the suburbs. But black, brown or white; from the city to the suburbs; as a teenager or an elder- at over 130 overdoses per day in the U.S. alone the probability of some of you encountering an overdose might be greater than not. What I am trying to say is Narcan is free. If you haven’t already, please acquire it and learn how to administer it because to put it simply- it won’t hurt to have it on you, but it might be a matter of life and death if you don’t. That life you may be saving from death might very well be the life of someone you know, or even love, because at the very least everyone deserves a more dignified death than dying on a public toilet. But even more than that, while this man might live alone on those streets we should never presume he does not have a son or daughter, or a mother and father who are still holding out hope for their loved one to care for himself as much as they care for him, and praying for him to come home. God knows so many have lost that chance already.

Much peace and love to every one of you and an immense amount of compassion to the inevitable suffering of the human experience- the kind we have no power over AND the kind we inflict upon ourselves.”

This story was submitted to Love What Matters by Julie Rocco. Submit your story here. For our best stories, subscribe to our free email newsletter.