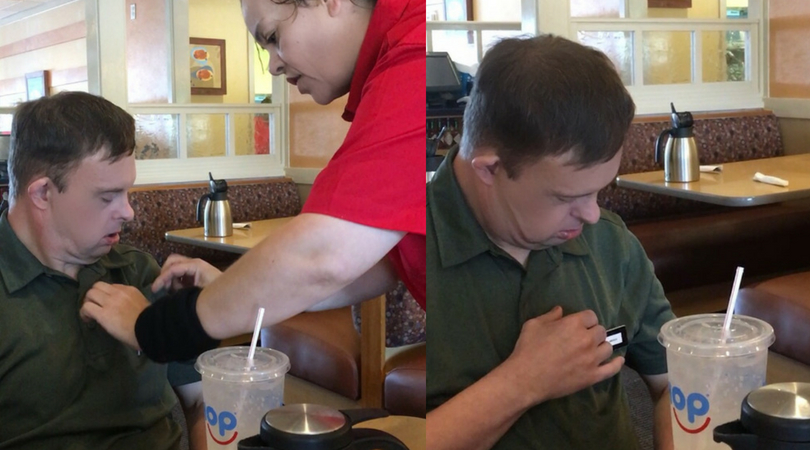 “Dwayne is the oldest of my siblings and me. He turned 50 years old earlier this year and he still lives at home with my mom and dad, who are retired.

Dwayne has Down Syndrome. He is a very special man who loves everyone he meets.  Everyone in his world is his ‘buddy.’ He is quite friendly and loves to socialize. If you ever happen to run into Dwayne, he will shake your hand and tell you that he is ‘Captain America,’ ‘John Wayne,’ or that he is a ‘cop.’ All of which are his heroes. Captain America is his most recent hero because of the red, white, and blue outfit. Dwayne is very patriotic and loves the American Flag and its colors. He salutes when he spots a flag.

As Dwayne has aged, he has begun to have some health issues. Mom, Dad and I take him to different Doctor’s regularly. Dwayne was diagnosed with Alzheimer’s Disease this past week. Although we were expecting it because it is so common in people with Down Syndrome – it broke our hearts.

Last week after a particularly trying Doctor’s visit, mom and dad and I, along with Dwayne stopped in a restaurant to get a drink and rest a minute. Dwayne immediately noticed the waitress’s name tag.  Dwayne loves badges and name tags. He told the waitress he liked her name tag. Most of the time when Dwayne tries to talk to people, they will smile and nod their head, but it makes them uncomfortable because it is difficult to understand him. This waitress just started chatting with Dwayne like they had known each other for forever. He told her his name was ‘Captain America.’  She was very sweet and attentive to him – which he just loved.

When it was time to go, the waitress came to our table and in her hand, she had a name tag. She asked him if she could pin the name tag on his shirt.

Of course, he was thrilled. I grabbed my phone, so I could take a picture. Her act of kindness touched my heart. ‘It says Captain America,’ she told him. He saluted her and smiled.  It made his day. He couldn’t quit looking at it.

Thank God for people like ‘Millie’ the waitress. Her thoughtfulness meant so much to him, but to me, it meant so much more. People never forget how you make them feel and she made Dwayne feel special and important that day. An act of kindness may seem like a small thing but never underestimate it’s power.”

This story was submitted to Love What Matters by Regina Thomason of Texas. Submit your story here, and subscribe to our best love stories here.