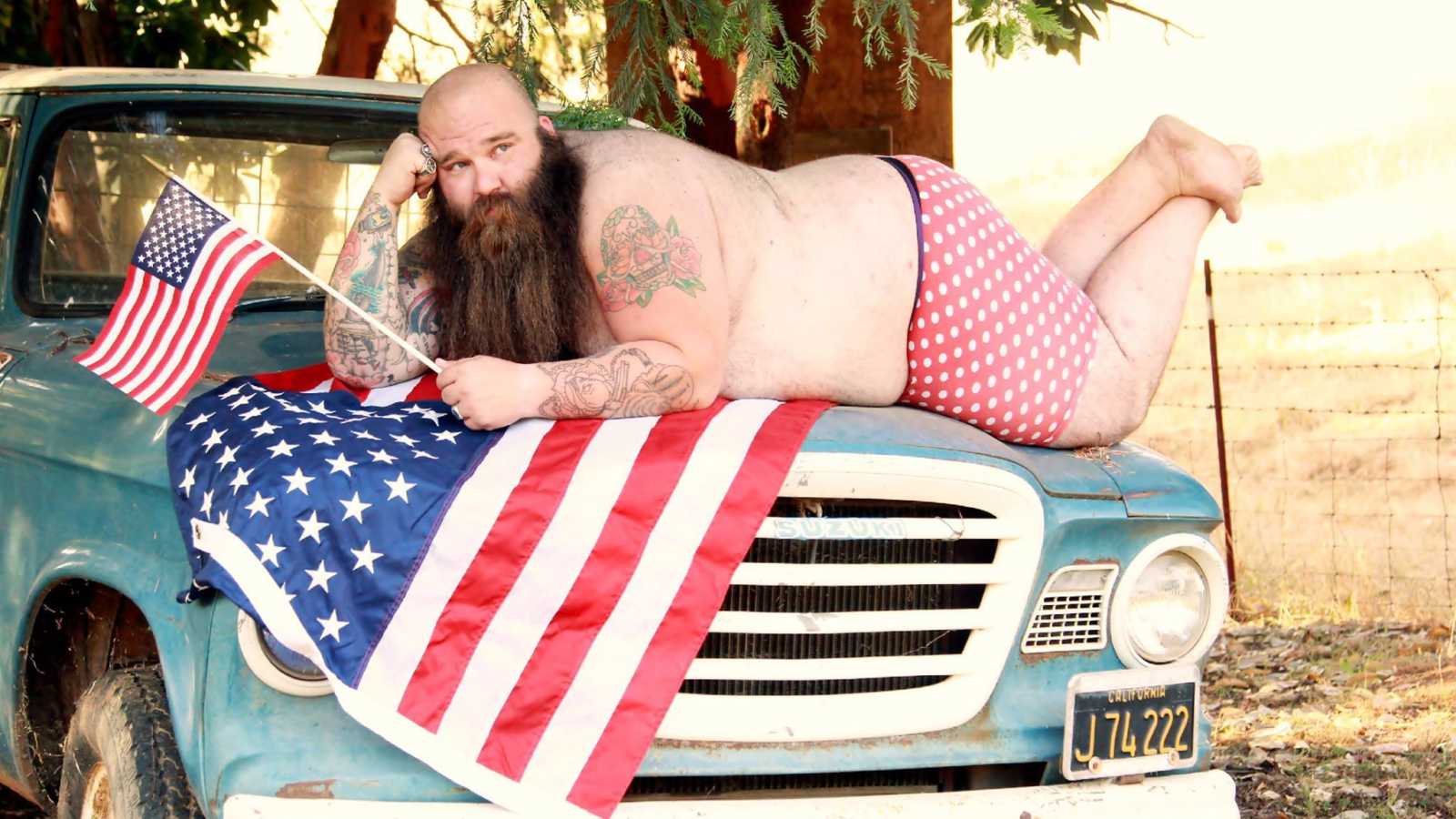 “Back in 2016, I had a funny idea of doing a ‘Dudeoir Photo Shoot’ instead of a ‘Boudoir Photo Shoot’ that I regularly was hired for by women. I wanted to make a man mimic some of the sexy poses the females have been doing for years, but I wanted mine to be comical, so rather than using a young, trim male model or firefighter, I thought, ‘How fun would it be to use a big, logger-like ‘Duck Dynasty’ type to really make it funny and entertain not just the female audience but make even men giggle as well?’ I had almost given up on my search when late one night I was scrolling Facebook and noticed a funny selfie my friend Joshua Varozza had posted of himself, confident in his underwear with a funny caption. I knew right away I would be hitting the JACKPOT of jackpots if I could talk him into doing this shoot.

At the time we were just friends and thank God when I pitched the idea to him he laughed and said he would do it! The shoot took place the night before Flag Day, and I decided I wanted it to be a country redneck American-themed Dudeoir session because at the time I was doing a lot of flag pin up-type sessions and knew this would be really funny to our small town. We released it late that same night hoping to make everyone locally giggle. What we did NOT expect was by the next day it was being shared all over the state, and two days later, all over the country. We were both in shock as we had no idea our silly idea would ever go that far. When the rush died down, Josh and I had become used to spending so much time together that first summer of chaos. We realized we really liked each other and began dating.

I was a single mom for 7 years raising a beautiful little girl and running my own photography business and had given up on dating, let alone ‘finding the one’ when I met Josh. We were Facebook friends but had not met in person until the night I shot his photos. Because it was a whirlwind after the photo shoot with interviews, that summer he became one of my closest friends. Because I was a single mom, my daughter had to come to many of the interviews and shows with us and she liked Josh a lot and felt like he was her friend too. When everything finally slowed down and we weren’t forced to be together anymore, we both missed each other and realized how much we liked being together. He made life more fun.

I remember my daughter saying, ‘Why don’t you date him Mom? I think he like likes you.’ I giggled because I did not know how I could date with having her full time and running a business and was scared of ruining our friendship. But he is so amazing and right from the get-go he was a very different, special kind of guy. He was my best friend first and it made a huge difference. It wasn’t like before when someone would say, ‘Can you get a sitter? I’d like to take you out.’ He would say, ‘Where do you and your daughter feel like going tonight?’ and included her. It made it so easy and when I did let my guard down to date him, I fell hard! The world wasn’t the only one who fell in love that summer after our photo shoot.

We are now engaged to be married this Fall of 2018 and have bought a home together where we have blended our two teens, 3 dogs and a cat. We are both patriots who love USA and all who fight for it. Josh captured the hearts of people globally and the fan mail was so wonderful to read. A lot of people felt our shoots made them smile and feel more comfortable in their own skin. We created God Bless America Dudeoir calendars and 100% of all proceeds go to our local Wheelers for the Wounded of California Veterans Group based locally where we live. Thanks to this chance hilarious photo shoot, we are able to donate thousands of dollars directly to our local Veteran’s group.”

This story was submitted to Love What Matters by Tami Renee Bears of Artistic Photography by Tami in El Dorado Hills, California. Submit your own story here, and subscribe to our best stories in our free newsletter here.

‘He looks at me. ‘What’s wrong?’ I respond, ‘I’ve been punched by your son and your daughter has done a massive poop in the bath.’: Mom recounts funny ‘stay at home mom’ instance

‘What better way to get in the 4th of July mood!’: Man shares hilarious patriotic DIY 4th of July outfit