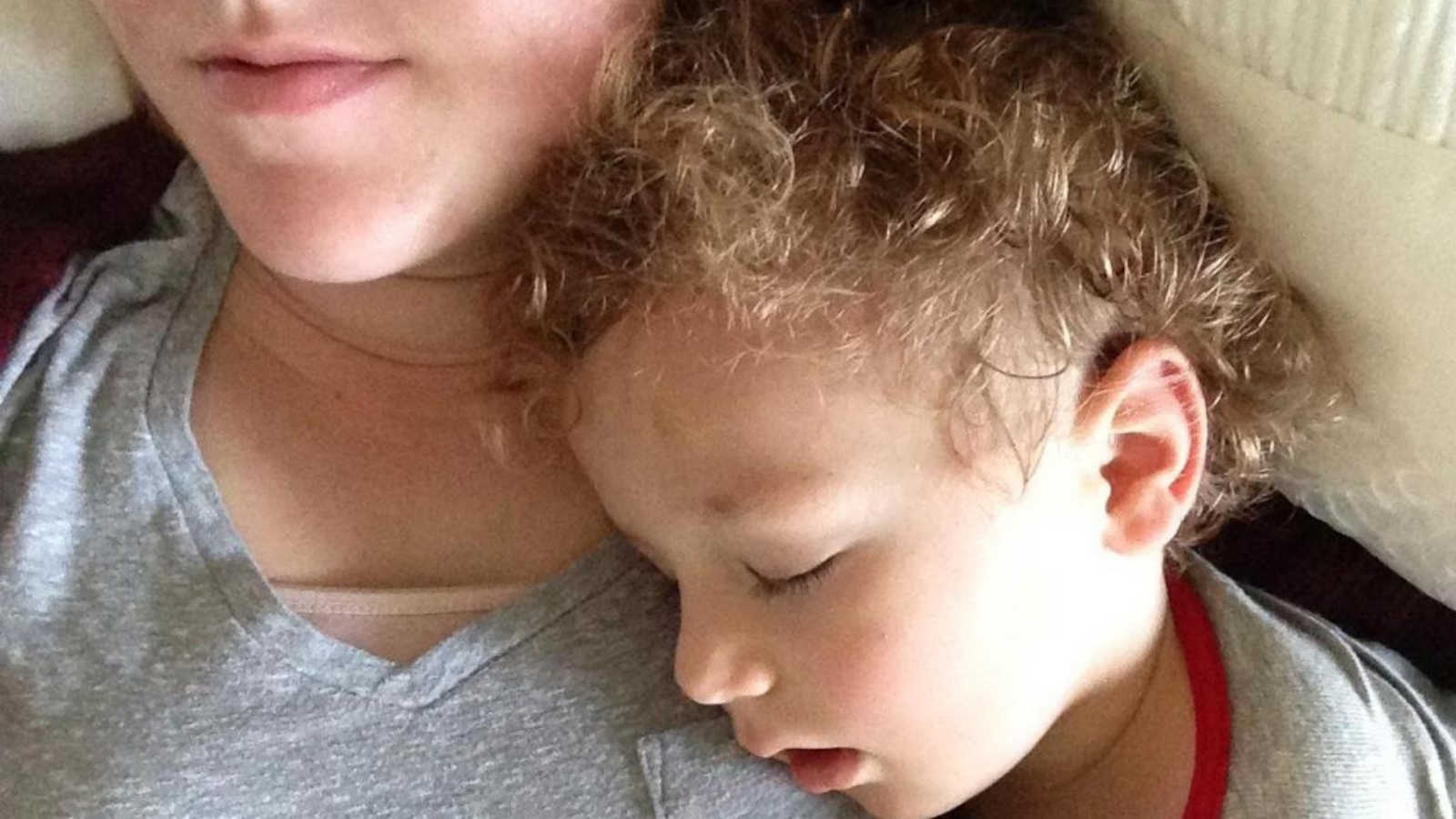 “Parents prepare yourself for some all-caps yelling, because this is going to change lives. All parents. If you have a child, I’m going to tell you something you need to know that you have probably never heard. And please share this. There is a huge red flag in the picture I am sharing with this story. Do you see it?

CHILDREN SHOULD NOT BREATHE THROUGH THEIR MOUTHS. Not while awake, not while asleep. Never.

If your child: falls asleep immediately after their head hits the pillow, snores, grinds their teeth, wakes up in the night, has night time accidents or daytime accidents, has impulse control issues, is hard to understand when speaking, has under eye circles, has crooked teeth or a misaligned bite, wakes up insanely early, is irritable during the day, has a bad appetite, listen up.

Let me back it up to last year: My son, Kian, now age 8, determined, intelligent, feisty, and extremely active. He started school, no problems in Kindergarten.

First grade rolled around, and we started getting behavior reports. ‘Kian pushed so and so,’ ‘Kian is having a hard time controlling his body.’ Parent teacher conferences, new reward system in place, and it seems to improve. But at home it did anything but. When Kian gets angry, he gets ANGRY. He gets fixated on little things (there is a hair in the shower, it’s gross! I can’t shower in there! *melt down commences*), his fuse gets shorter and shorter, and he’s a picky eater who barely eats.

Second grade rolls around, and oh boy. While other kids are outgrowing their tantrums, Kian’s intensify and turn into daily spectacles, triggered by the smallest thing. The behavior reports from school start rolling in. ‘Kian is pushing,’ ‘Kian can’t control his impulses,’ ‘Kian is having a hard time staying in his seat,’ and it is going on and on. Almost daily. And I’m mortified. Every morning it’s tantrum after tantrum, before we even get out of bed. Hitting, and throwing things, and the screaming. All the screaming. Starting at 5 a.m. every morning. We were at a loss – how did he become this way, what could be have done different?

Kian starts seeing a therapist, recommended by his pediatrician. The therapist starts working with him, and eventually recommends ADHD testing. Meanwhile, in the background, Kian has a persistent cough that just won’t go away, so we are also seeing a pulmonologist, and, against the advice of the pulmonologist, an allergist. This will become relevant in a moment. Each doctor is recommending more and more medications – 2 inhalers for the cough, an antibiotic (4 different rounds) for the postnasal drip, a steroid, and it goes on and on. The therapist is dancing around ADHD, pushing us in that direction. At a cleaning, Kian’s dentist makes an offhand comment about his teeth – they were ground almost half way down, he’s grinding his teeth at night.

And then lightning struck, right at the perfect time. I stumbled upon an article that changed our life. The article was about the connection between ADHD, sleep disordered breathing, and mouth breathing. Every word in this article sounded like Kian. This led me down a rabbit hole of research (the majority of which was done right in our back yard at the National Institute of Health) where I learned the following:

-Mouth breathing is NOT NORMAL and has long term consequences for health. I’ll repeat, because this is important.

– MOUTH BREATHING IS NOT NORMAL, NOT DURING THE DAY OR AT NIGHT. When a child breathes through their mouth, their brain (and body) is not getting enough oxygen. At night, this lowered oxygen saturation is detrimental to the quality of sleep and their brain’s ability to get enough rest.

-When the mouth is open, the tongue cannot rest in the correct place. Over time this can lead to incorrect development of the upper jaw – narrow and high palette, a recessed lower jaw (over jet and overbite can form), speech problems (r/l mispronunciation) and misaligned teeth. These developments narrow the airways and worsen the problem. Medical professionals have a term for the resulting ‘long’ face caused by these changes – ‘Adenoid face.’

-When sleeping, in addition to the decreased oxygen, the recessed jaw can cut off the airway completely and contribute to sleep apnea in children. To compensate, the body wakes the child and pushes the jaw forward, resulting in disrupted sleep cycles and tooth grinding (bruxism).

-Sleep deprivation in children and ADHD exhibit the same symptoms. The EXACT SAME SYMPTOMS. Studies have been done (thanks, NIH) where they took medicated ADHD kids, fixed the sleep disordered breathing, and within 6 months 70% of the children had seen a resolution in symptoms and were no longer medicated. As in, their ‘ADHD’ was cured. Because it wasn’t ADHD. In 70% of children. Let that sink in. This means that 70% of those children had been misdiagnosed with ADHD, when they actually had a treatable sleep disorder.

-Stimulants – Of course they work, until they don’t. If you are sleep deprived, taking a stimulant will of course help you focus and feel ‘normal.’ But the brain is never fully resting – and hence the side effects that pop up: ‘nervousness, agitation, anxiety, sleep problems (insomnia), stomach pain, loss of appetite, weight loss, nausea, .suicidal ideation.’

Imagine yourself with, let’s say, three days of sleep deprivation. Now multiply that times 100. Now throw a stimulant in the mix. How do you think you’ll feel once you start coming down from that? The list goes on and on.

Our story has a happy ending.

After a visit to an ENT and a sleep study he was diagnosed with sleep apnea and sinusitis. He got exactly 0 minutes of REM sleep during the first study, and oxygen saturation in the low 80%, and his sinuses were 90% blocked. We had no idea that Kian had a headache daily, but it was just his normal, so he never thought to tell us. Kian had his tonsils and adenoids removed and the change was immediate. He could breathe through his nose as he came out of surgery, where he couldn’t when they wheeled him in.

We have seen a complete 180 in behavior. No more angry tantrums, no more fixation on little OCD things, it’s been an enormous change. And we haven’t even finished the second step – fixing his jaw and tongue issues that developed during the course of undiagnosed sleep apnea. Our follow-up sleep study? 360 minutes of REM sleep, and oxygen saturation above the minimum threshold. No behavior reports in school. His appetite has exploded, he’s no longer a picky eater, and he had a huge growth spurt 2 weeks after the surgery. He still has mild sleep apnea, but the frequency in the night was cut in half, and the duration of each episode was cut in half. If we see this much of a change now, I can only imagine how much it will improve once we cross the finish line.

Here’s why I am sharing: No one, in my 12 years of parenting, ever told me any of this. All the signs were there, right in front of our eyes, and I had no clue. Kian’s pediatrician, who we loved and trusted, never said a word. The therapist had no clue, the pulmonologist, the allergist, even the ENT and sleep doctor didn’t believe me when I insisted, he be seen for this invisible health issue. Not during any of our regular appointments, or during any of our sick child appointments. And not until we have tangible proof with sleep study results and sinus imaging did anyone believe. I had to find this, diagnose this, and push for treatment myself. And thank God I did.

If any of this is raising red flags in your mind, if this sounds like your child, if your child has been diagnosed with ADHD, please see an ENT and get a sleep study. It may just change your life.

Please share this, you may help someone – I wish I had learned this information years ago!

–Editing to add: I’m grateful for the widespread reach, and all possible ripple effect this is having. If you’ve messaged me or are thinking about messaging me with a question similar to: ‘This is my kid/This sounds like me/Can this be an issue for adults/Can you diagnose me?’ this is for you. I cannot diagnose you, see a doctor. This is the entire point of this post – see a doctor! See an ENT (check with your insurance, I didn’t need a referral and booked an appointment directly), schedule a consultation with a sleep doctor (also was able to book directly, check your insurance). See a professional. For the love of all that is good, I cannot fix your medical issues, please see a doctor!”

This story was submitted to Love What Matters by Melody Yazdani, 34, of Vienna, Virginia. It originally appeared here. Do you have a similar experience? We’d like to hear your important journey. Submit your own story here. Be sure to subscribe to our free email newsletter for our best stories, and YouTube for our best videos.