“At approximately 2:45pm on December 20, 2013, Lori Burk, my co-worker at the Salt Lake County Health Department, poked her head around my cubicle wall and said, ‘Gay people are getting married across the hall.’

‘Gay people are getting married across the hall.’

‘GAY PEOPLE. ARE GETTING MARRIED. ACROSS THE HALL!’

‘Yes, for real. Thought you might want to know.’

I walked out of the health department suite and looked across the hall to the Salt Lake County Clerk’s Office. Sure enough, there were 4 same-sex couples standing in line outside the door. Seth Anderson and Michael Ferguson, the first couple to be married, were inside, and Salt Lake County District Attorney Sim Gill was with them.

‘Is this really happening?’ I thought.

I went back to my desk and pulled up the Salt Lake Tribune website. Yep, the top headline was, ‘JUDGE STRIKES DOWN UTAH GAY MARRIAGE BAN.’

At 2:51pm, I texted Kalina Duncan, who was tied up in San Francisco on her way to SLC for the holidays: ‘Judge strikes down Utah gay marriage ban!’

Then: ‘Wait a minute. Does this mean gay marriage is legal in Utah NOW?’

‘I guess so… people are getting married across from my office right now.’

I went back into the hall. Though it had only been a few minutes, there were now around 25 couples in line outside the clerk’s office. Soon, that number would grow to 50, and eventually to over 100. Salt Lake City Mayor Ralph Becker had just arrived and the first handful of actual marriage ceremonies began. The second floor of Salt Lake County Government Center’s south building was filling up. The atmosphere was jubilant, but a little apprehensive, as if no one could believe this was actually happening and the marriages were valid and would remain so.

In addition to the line of couples waiting, excited friends and family of those with newly issued marriage licenses began to crowd around most couples as they exited the clerk’s office. Each group of excited people moved to an area of the second floor that still had some space. Every 2-3 minutes, there would be cheering from a different area of the hall as one couple after another got married. The sense of apprehension began to lift, and there was only pure joy, on repeat, throughout the building.

I called Michael: ‘You should come to my office on your way home from work. Gay people are getting married and it’s AWESOME to witness.’

I watched around 20 couples get married, and by then the first floor atrium of the south building was full of wedding ceremonies and well-wishers.

Just as Michael arrived, we ran into BobbiJo Kanter in the hall, along with other friends in line. We stood in line just socializing while various friends waited their turn.

It was approaching 5pm, when the clerk’s office closes, and people were beginning to get nervous and tense. Couples in line were worried they wouldn’t get inside to get their license before the office closed. People around us began speculating about what would happen when the office closed. Would people get angry and riot?

I hurried back to my office and printed a small stack of marriage license applications, then I grabbed a clipboard and several pens. I’d never taken off my county employee ID badge, so I looked legitimate walking up and down the line asking people to begin filling out their applications in advance so we could get as many people as possible through the office before it closed.

Just before 5pm, the deputy clerk came out of the clerk’s office and yelled to get everyone’s attention.

‘We will remain open as long as necessary to serve everyone who is in line by 5pm,’ she said. I learned later that the clerk’s office employees had unanimously volunteered themselves to stay late for everyone in line, even though it was the Friday night before Christmas. Government Center protective services officers marked who was at the end of the line at 5pm. 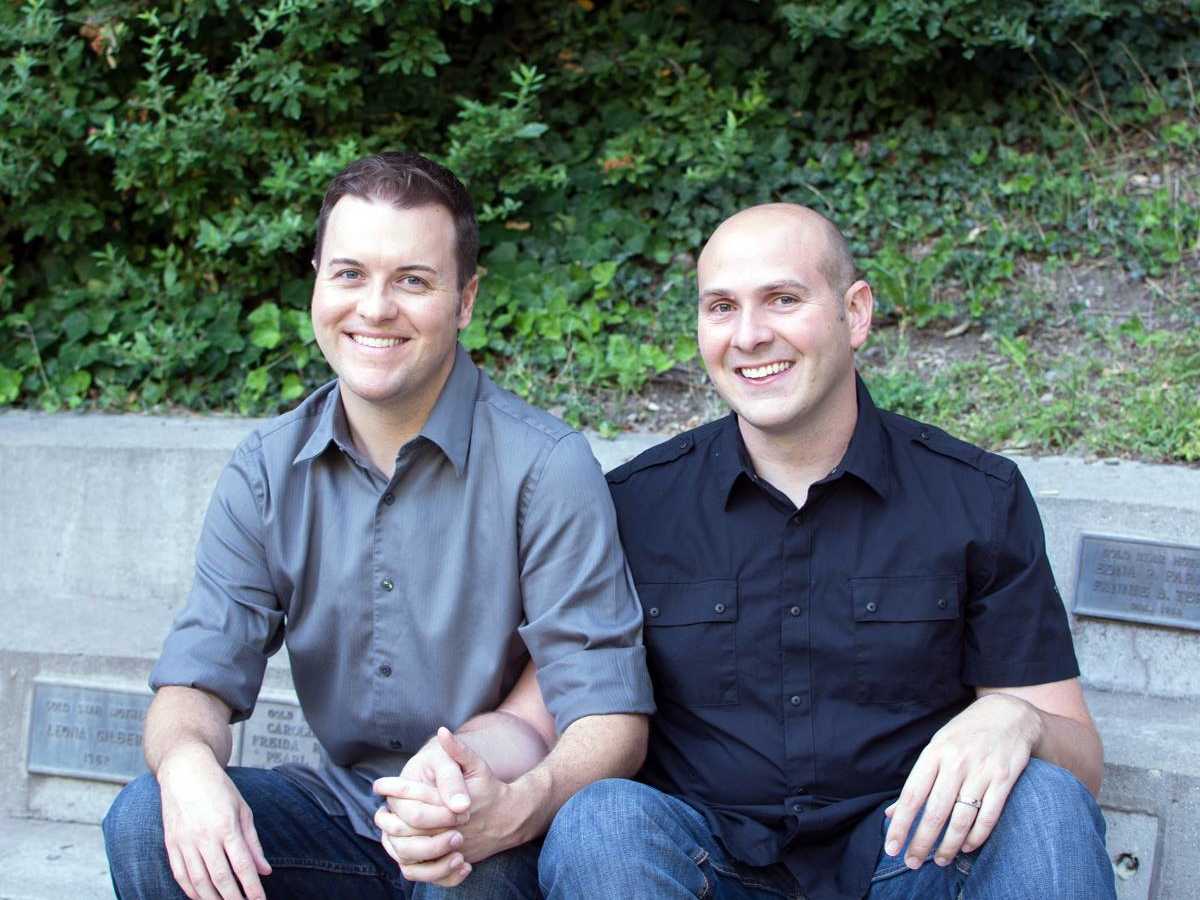 I was back in line with Michael and our friends when I heard someone behind me say, ‘Governor Herbert is trying to get the court to issue a stay. If he gets his way, this all stops.’

Part of my brain panicked. What if the governor got his way? What if this all stopped? Was this window of opportunity about to close? Michael and I had been dating almost 3 years, and I was sure about him. But was he sure about me? I should ask him! Right now! Yes! But I’d heard people needed two forms of ID to get a marriage license, and we each only had our driver licenses. But we weren’t THAT close to the front of the line yet… I could go home and get our passports and be back in time!

All these thoughts were spinning in my head, but I never turned any of them into actual words. Instead, I looked down at the handful of applications still on the clipboard in my hand. Then I turned to Michael, shoved the clipboard at him and said, ‘HERE! Fill this out!’

And then I dashed off to get our passports, leaving Michael, now with the clipboard, in line with our friends. He looked at BobbiJo and said, ‘Was that a proposal?’

Driving home and returning with passports took too long, of course. So Michael reached the front of the line, alone, before I returned. As he let each couple behind him move ahead, several people asked him if he’d been left at the altar.

But I came back, eventually, and quickly signed my part of the application as we approached the counter for our turn.

When we handed in the application, I thanked the clerk’s office employee for staying after hours for us all, and she smiled sincerely and said, ‘We’re so happy to be here to do this for you. Let me take this to my computer to enter it and I’ll be right back.’

After she left us alone at the counter, Michael turned to me, eyebrows raised, and said, ‘ARE WE GOING TO TALK ABOUT THIS?!?’

When we turned in the application, we learned that we’d been misinformed: only one form of ID was required, so my trip home had been unnecessary. Except while I was home, I’d also grabbed what I had intended to be a surprise Christmas gift for Michael: a ring box holding two rings. 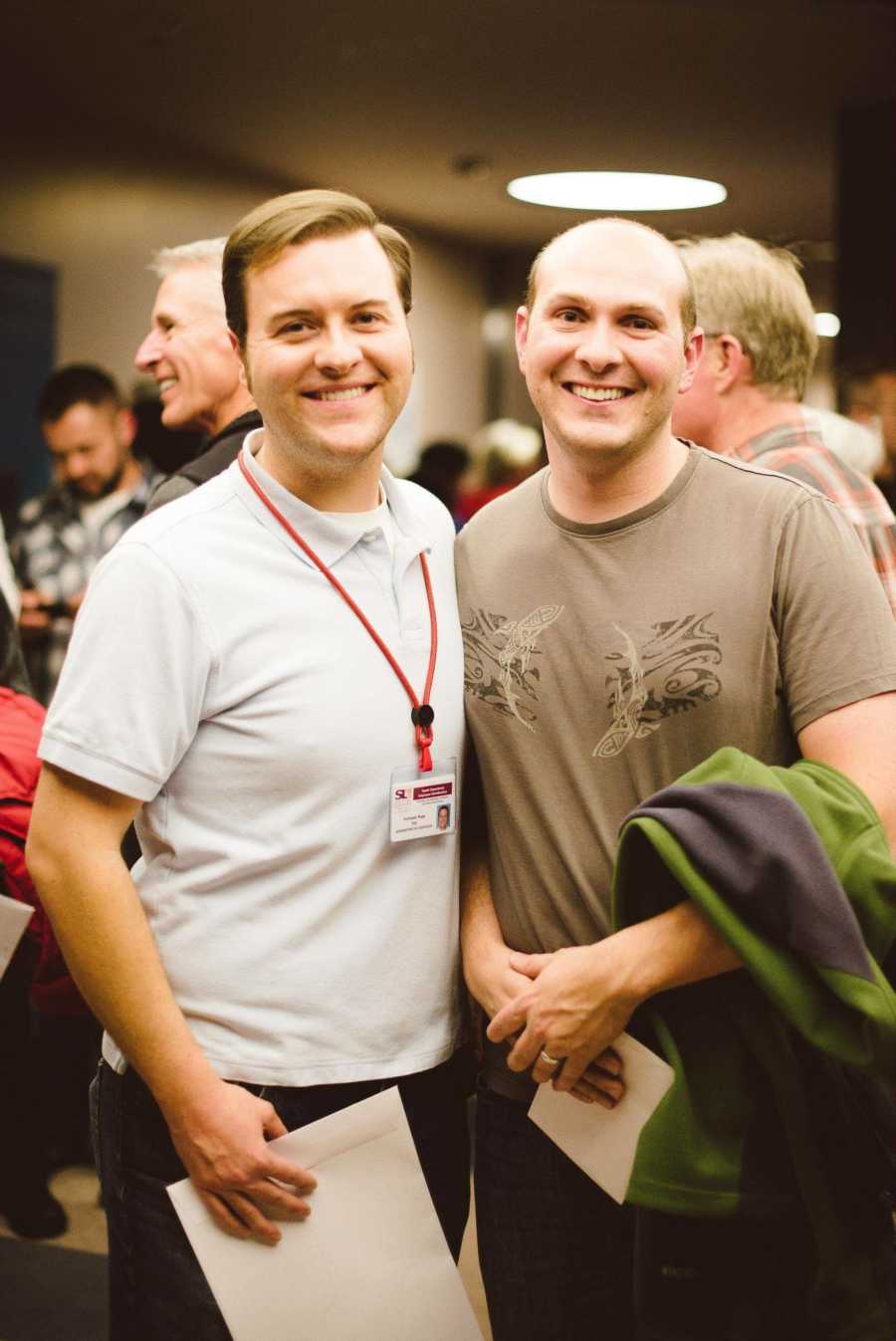 ‘I was going to give this to you for Christmas,’ I said as I pulled the ring box out of my pocket. But Judge Shelby bumped up my timeline by 5 days. So… will you marry me?’

Michael’s jaw dropped, and he (fortunately) said yes. Honestly, I’m not entirely sure he would have said yes if I hadn’t had the rings. They let him know I wasn’t just asking to take advantage of the historic moment. He realized I’d genuinely wanted this before we knew about the ruling, and he saw I’d made plans to ask him regardless of the legal recognition and timing.

When we left the clerk’s office with that precious marriage license, we ran into more friends and loved ones in the hall, including our close friends, Doug Balli and Rob Blackhurst (who’d just been married by Mayor Becker), and a minister neighbor who was offering her services to anyone in need. Doug and Rob agreed to be our witnesses, and Reverend Heron performed the ceremony. 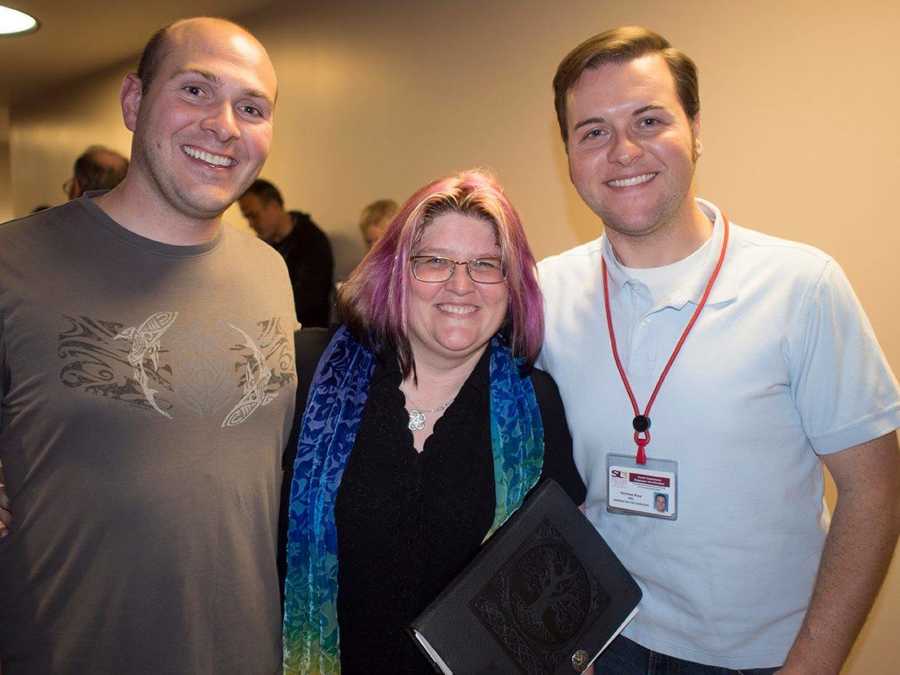 So that’s how it happened. That’s how, five years ago tomorrow, I got married in front of the women’s restroom at my work, with 20 minutes’ notice, while wearing my employee ID badge on a lanyard around my neck.

And I wouldn’t change a single damn thing about it.”