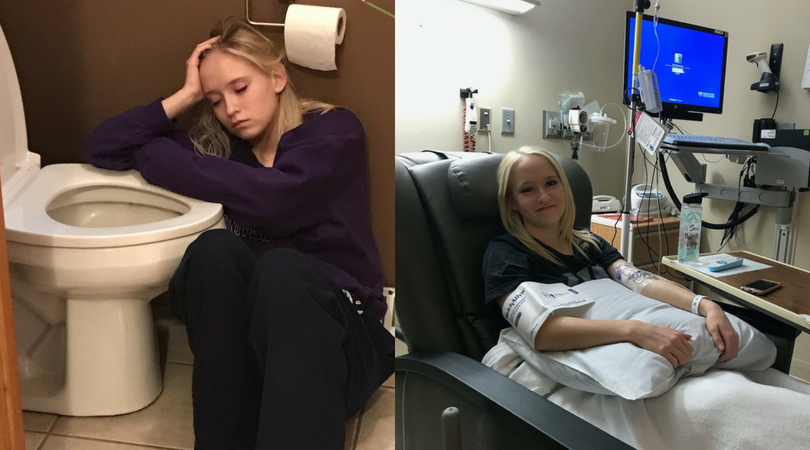 “I remember waking up some days terrified to face the world, knowing that that day might be the day I’m too tired to make it through the pain, too tired to face college and act like a ‘normal 20-year-old’ too tired to walk, too tired to be my normally outgoing, smiley self.

It all started my sophomore year of high school and from there the health challenges just seemed to keep piling up. My sophomore year I was diagnosed with mononucleosis, a viral infection characterized by extreme tiredness—from there I was always facing a health issue or issues. It was always one infection, sprain or strain, or other ailment one after the other with no apparent cause. I could get through the random, intense pains, headaches, weight fluctuations, but what really scared me was the day I woke up and couldn’t remember things. I woke up unable to express myself. That was the first warning sign. The second, was when this unknown illness of mine began attacking my heart. I didn’t even think all of these issues could be causes by a tick bite I had received growing up in small town Nebraska.

To say that I was terrified would be an understatement, I had gone passed being in pure fear to just feeling helpless and numb. Each appointment, one specialist after another (gastroenterologist, endocrinologist, infectious disease specialist, rheumatologist, cardiologist, etc.…), wore down on me. Here I was trying to be a responsible college sophomore attending all of my classes, cheerleading for the university, and holding several leadership positions on campus all while maintaining a strong GPA and 2 part-time jobs. I began having to make choices about what I could and couldn’t do, and by the end of the year the only thing that I did do was sit while I was poked and prodded by doctors and attempt to go to classes.

After the first of the year I began doing more and more research knowing that we needed to get to the bottom of this. There were some days I could barely walk on my own, even collapsing in the middle of my nursing clinical from the pain in my legs. No doctors had answers. My speech got worse and worse, my memory was horrible, and my extra heart beats were coming faster and faster. I was scared and desperate for answers. That’s when I began googling my symptoms. If no doctor could figure it out then I would at least try.

I finally came across Lyme disease—more specifically Late Stage Lyme Disease. Almost every symptom that was listed I was experiencing or had experienced. I brought it up to the last specialist I was seeing—a rheumatologist—and he said it wasn’t likely to be Lyme Disease in Nebraska and went on to diagnose me with fibromyalgia after previously being sent there by another doctor who thought I had Lupus. This diagnosis of fibromyalgia just didn’t seem correct to me with the memory loss, extreme fatigue, and cardiac issues I was experiencing—the pain was only part of what I was experiencing. My mother and I finally convinced this doctor to run blood work for Lyme Disease and he ran the ELISA lab work. To our surprise it came back negative but after doing more research and then meeting with another doctor this would all begin to make sense.

We were still convinced it was Lyme Disease and found an LLMD, Lyme Literate Medical Doctor (in the ‘Lyme World’ that is basically a doctor who specializes in Lyme Disease) a couple states away and made an appointment. This doctor was phenomenal. She looked at all of my systems as a whole rather than just one body system separately. She also took lots of blood.  Later that month, my blood tests came back: I had Late Stage Lyme Disease, Chronic Mononucleosis, Chronic HHV-6 (the virus causing roseola in children) and 2 other co-infections called Babesia and Bartonella. One appointment and I finally had an answer, well 5 answers to be specific. This doctor explained to me why my other Lyme blood work had come back negative even though my most recent blood work came back positive. There are 2 blood tests for Lyme Disease recognized by the CDC (Centers for Disease Control), western blot and ELISA.  Most late stage Lyme Disease patients will never test positive with these 2 tests because the bacteria causing Lyme Disease, Borrelia burgdorferi, shuts off your immune system. By shutting off my immune system, my body was unable to make antibodies towards the disease. Both the western blot and ELISA look for antibodies in your blood and have been shown to be fairly inaccurate. The test my doctor ran was through the Igenex Laboratory in California. This lab specializes in testing for tick-borne diseases and is used by most LLMDs to diagnose tick-borne illnesses due to their new technology and heightened test sensitivities. At this appointment my LLMD also explained to me that my Lyme Disease is no longer curable, but it is possible for me to reach remission. Had we caught it within the first month or two of being bitten, a cure would have been possible.

On our way home from that appointment, I remember telling my mom ‘God gave me this disease for a reason. People need to be heard by their doctors and accurate testing needs to take place for Lyme Disease before it’s too late.’ Since then, I have undergone 2 extreme diet changes, many pill bottles, a PICC (peripherally inserted central catheter) Line placement procedure, and currently I receive 4 intravenous treatments via my PICC Line and swallow around 20 pills a day. I still have a long road ahead of me, but God has blessed me immensely by providing wonderfully supportive family and friends through it all. I’m finally returning back to my old outgoing, smiley self and will begin my junior year of nursing school in the fall. My goal is to continue spreading awareness and to one day open my own practice as a Nurse Practitioner diagnosing and treating Lyme Disease and other illnesses, all while providing an atmosphere where my patients feel safe and validated. Who would have thought just one tick bite at least 4 years ago started this all?

My one piece of advice is this: You know your body the best. Don’t let any doctor, nurse, friend, or family member tell you any differently. This was a big challenge for me and my family, because many medical specialists don’t recognize nor treat Lyme Disease and I was often told it was just in my head. It’s most commonly misdiagnosed as fibromyalgia, multiple sclerosis, Alzheimer’s, Lou Gehrig’s disease, rheumatoid arthritis, lupus, chronic fatigue syndrome, and is even known as ‘The Great Imitator’ mimicking over 300 diseases/illnesses. Don’t be afraid to speak up and get the help you need before it’s too late.”

This story was submitted to Love What Matters by Emmalynn Walvoord, 20, of Nebraska. You can follow her journey on Instagram here. Submit your story here, and be sure to subscribe to our best love stories here.

Please SHARE this article with your friends and family to raise awareness about Lyme disease!