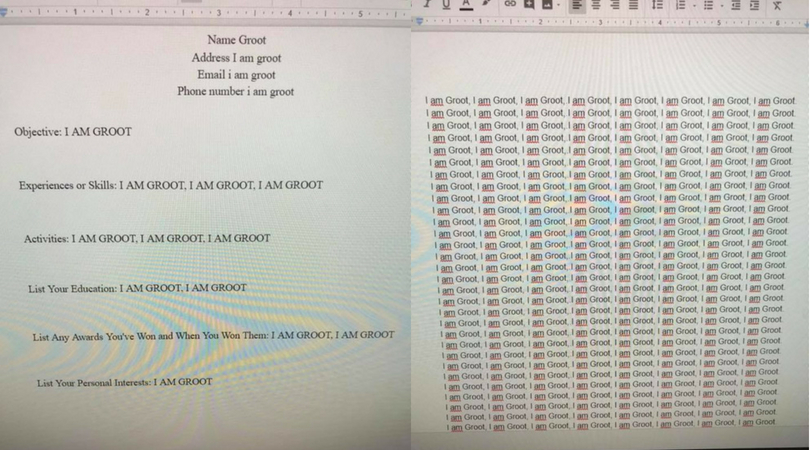 “My name is Jeff Davis, I am a Career Technology Education- Robotics and Engineering Design teacher in Wichita Falls Independent School District located in North Texas. Last week, my students had to pick a Marvel character to embody within a resumé and cover letter.

This resumé was a great one primarily because the student saw the opportunity, kept it to themselves and never mentioned a word until I asked them about it. I did receive another very funny resumé and cover letter done for Daredevil (blind lawyer by day, crime fighter by night) the resumé was turned in written in normal Times New Roman print but there was another attachment that the student changed to represent the brail dots. I thought that was clever but hardly any of my students knew who Daredevil was so I just shrugged it off and had a personal laugh. The student received a 95 and 100 on two separate grades. he had points taken off for capitalization and inconsistency on his name ‘Groot’ he left out ‘I am.’  Grammar is very important. I am pretty excited about how fast it spread. I never imagined in a million years it would be as popular as it has become. I just thought it was funny and something to share with my friends on Twitter and Facebook. The students had to pick a Marvel Cinematic Universe character but most picked characters that were more like Tony Stark; someone more business inclined. Other students did end up with Groot but only one turned their resumé and cover letter in with this as their ‘work.’

I try to make my class somewhere students want to be and not something they dread. The line, ‘You miss 100% of the shots you don’t take’ by Wayne Gretsky is a quote describing a coach being upset with his low scoring when he was younger. Basically if you don’t try, you wont score. always move forward, always try harder. I don’t expect 110% out of my students because that is unrealistic. I do expect 100% because even if it wasn’t the best grade, you tried your best. If you don’t give it your all, was the reward worth it?”

This story was submitted to Love What Matters by Jeff Davis, of Wichita Falls, TX.  Submit your story here, and subscribe to our best love stories in our free newsletter here.