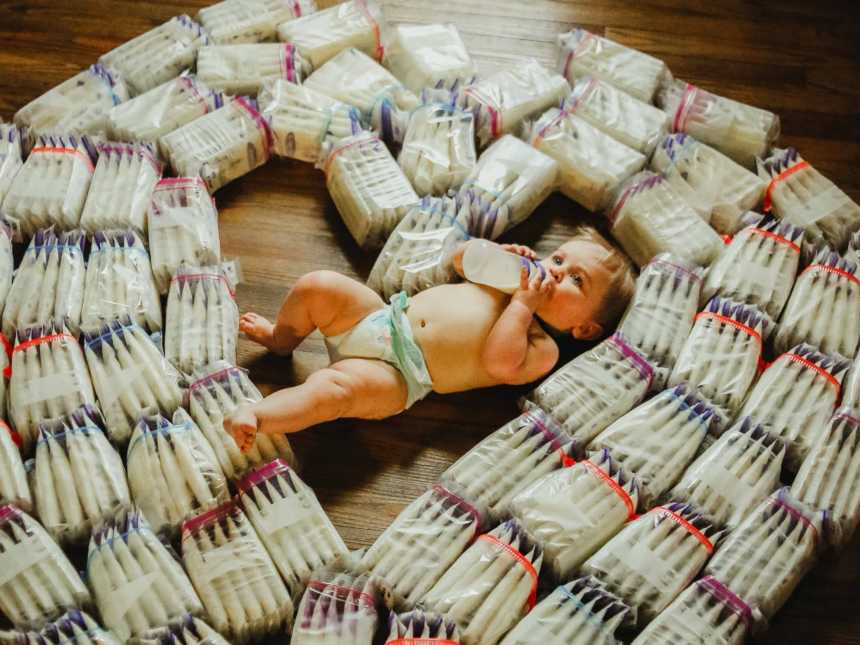 “Before becoming a mom, I always envisioned myself breastfeeding. However, things didn’t go as planned when I had Ayden, my failed natural birth. All I wanted to do was to hold him and feed him. When I finally was able to nurse him, he latched on, but there was pain. The nurses told me it was normal and would get better so I toughed it out. I went home and continued to breastfeed, but Ayden’s latch was awful. I saw three lactation consultants who tried to help us, but no luck.

Two weeks in, I had cracked nipples and bleeding. Right then and there I made my mind up: I was going give him formula. I just couldn’t do it anymore. For two days I gave him formula and felt awful about it! In those two day, I started pumping and found it less painful. As a result of our issues, I began exclusively pumping. Every day I would connect to the dreadful machine for 10 to 20 minutes every three hours. If you would have asked me at month one if I would still be pumping at month nine, I would look at you like you’ve lost it. But here I am at nine months and weaning because I finally have enough to last us to one year! That’s right, he’ll be on breast milk for a whole year!

Over the past nine months, I have been able to give over 1,000 ounces to help feed seven other babies who needed milk when their mamas were either in the hospital or their supply was low.

In the beginning I was pumping around 24 to 28 ounces a day and realized that’s just enough to feed him every day, and never had enough to freeze in case of an emergency. I got on the Internet and started searching for ideas to boost supply. I found out about power pumping and it helped so much! My supply increased up to 45 to 50 ounces a day. I also took lactation brownies (not sure if they helped much but they sure tasted good). Ayden eats about 28 ounces a day, so I leave that in the fridge and what’s left goes in the freezer. I label each bag with the date and time.

I have learned that your nighttime milk is darker than your morning since there is more fat in it.

There were nights I would wake to pump and just cry the whole time. I hated it. I HATE it! I know that sounds horrible. People tell me I am so blessed and this I know! I thank God every day for giving me a good supply but then there are THOSE days when you just want to be away from the dreadful machine. My nipples are always sore, wearing a normal bra is a challenge and finding clothes other than t-shirts to fit over them is a whole different story.

I posted my stash online one day. Not to brag, but dang it I worked hard and was proud of it! That’s when the messages started. Moms was asking how I did it and if I had any tips. That is when I started donating.

My first mom was a nervous wreck. Her little one was 3 months old and had human respiratory syncytial virus (RSV) in the hospital. She was having a hard time nursing him because he wasn’t breathing well and unfortunately, she wasn’t responding well to the pump to get enough to feed him. I felt the urge to ask her if she needed milk to hold her over until he was out. She was in tears because she felt so defeated, and I knew she was tired. This was my first baby other than Ayden that I have fed. It felt good. It felt amazing to know that I was able to feed not one, but two babies!

After that, I just offered it to those who needed help. I have a friend who I still donate to regularly. She nurses but can’t pump anything when she tries. When she has to go out of town and leave the baby, he gets my milk while she’s gone. I even had one mom want a few bags for milk baths. Her daughter had bad acne and she swore by milk baths.

Through my struggles I have been blessed. It has been a long, trying emotional road, but we have made it. Nine months and weaning. I am thankful for my family and mostly my husband who has taken food out of the freezer numerous times to make room for my stash.”

This story was submitted to Love What Matters by Christa Hood, 28, of Waycross, Georgia. Submit your story here.