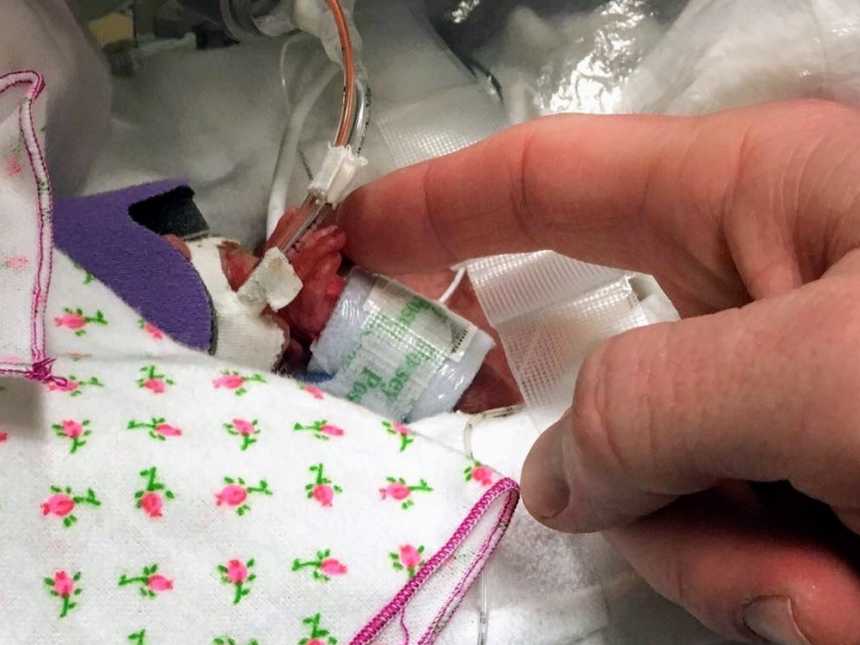 We have a heartbreaking update on the resilient 1-pound preemie who was fighting for survival last week. Unfortunately, little Logan has passed away. Her mother, Lisa Healion Meyer, told Love What Matters their family is ‘deeply touched’ by the outpouring of support.

“We are deeply touched that so many people from around the world love our daughter so much, and have reached out to let us know they are praying for us,” she said. “It is really comforting knowing we are not in this alone and that Logan has left a legacy of love.”

Healion Meyer shared the news of Logan’s death with the world on Sunday.

“Logan passed away peacefully in our arms tonight after a traumatic brain bleed, Ben and I are heartbroken,” she wrote on Facebook. “We are so grateful for the week she fought to be with us and forever thankful for the support we have received during this time. It makes us happy to know that Logan touched so many lives and through this experience Ben and I learned how many amazing people there are in this world. Thank you all again.”

Logan passed away peacefully in our arms tonight after a traumatic brain bleed, Ben and I are heartbroken. We are so…

“My pregnancy was normal up until 21 weeks. The week prior, I had the usual 20-week ultrasound. My husband and I were thrilled she was healthy and perfect. One week later I started spotting. I wasn’t too concerned and the doctor wasn’t either. He said I had a subchorionic hemorrhage which was fairly common and should heal up on its own. Unfortunately, as the days went on, the bleeding got heavier and when I went in last Thursday, the heavy bleeding had caused me to contract. I was 3 centimeters dilated.

The doctors tried to have me taken into surgery to sew up the cervix and stop labor, but my water broke and an infection was discovered so they had to give me Pitocin so that my body didn’t go into septic shock. The doctors warned me that unfortunately, the age of viability is closer to 24 weeks and that Logan would probably not make it out of the delivery room. We were given a 1% chance that she would survive birth, and we were asked if we would rather just hold her after birth so we could have time with her until her heart stopped. They were going to provide us with a cooling cot to keep her body from decomposing. We were devastated. We decided that the 1% chance was worth it. We wanted the doctors to try and save her.

They let us know the breathing tube would probably not fit down her small throat and that if that was the case, they would not do chest compressions. Surprisingly the tube fit and Logan was able to breath with the help of ventilators! The doctors have told us they are taken aback by her resilience.

They are letting Logan take the lead because this is brand new territory being that Logan is the smallest/youngest baby to be born at that hospital at 1-pound, 2-ounces, and 22 weeks and 2 days, but they have said she is holding her own! So far Logan has been stable. She is 6 days old and has responded well to all lifesaving treatments. She has started receiving breast milk in her feeding tube. She has received a brain ultrasound that showed no bleeding on the brain, as well as lung X-rays that also showed little to no damage so far.

Right now the biggest concern is her skin is so underdeveloped it’s like an open wound. They have her covered with a Vaseline-type solution to help it heal and get stronger. Infection is the biggest risk with her skin being so weak right now. Logan is under 1-pound now because her body is losing fluids through her diaper and skin, but as her skin gets stronger and she continues with feedings she should hopefully start gaining weight. Of course doctors and nurses say with her size, any small hiccup can be deadly for her, but we are hopeful and believe all the prayers and support have helped her to thrive.

We are trying to balance the NICU as well as our family. We have a 2-year-old girl and 9-year-old boy. My husband is a teacher and I run an in-home daycare.”

This story was submitted to Love What Matters by Lisa Healion Meyer, 29, of Elkhorn, Nebraska. Submit your story here.