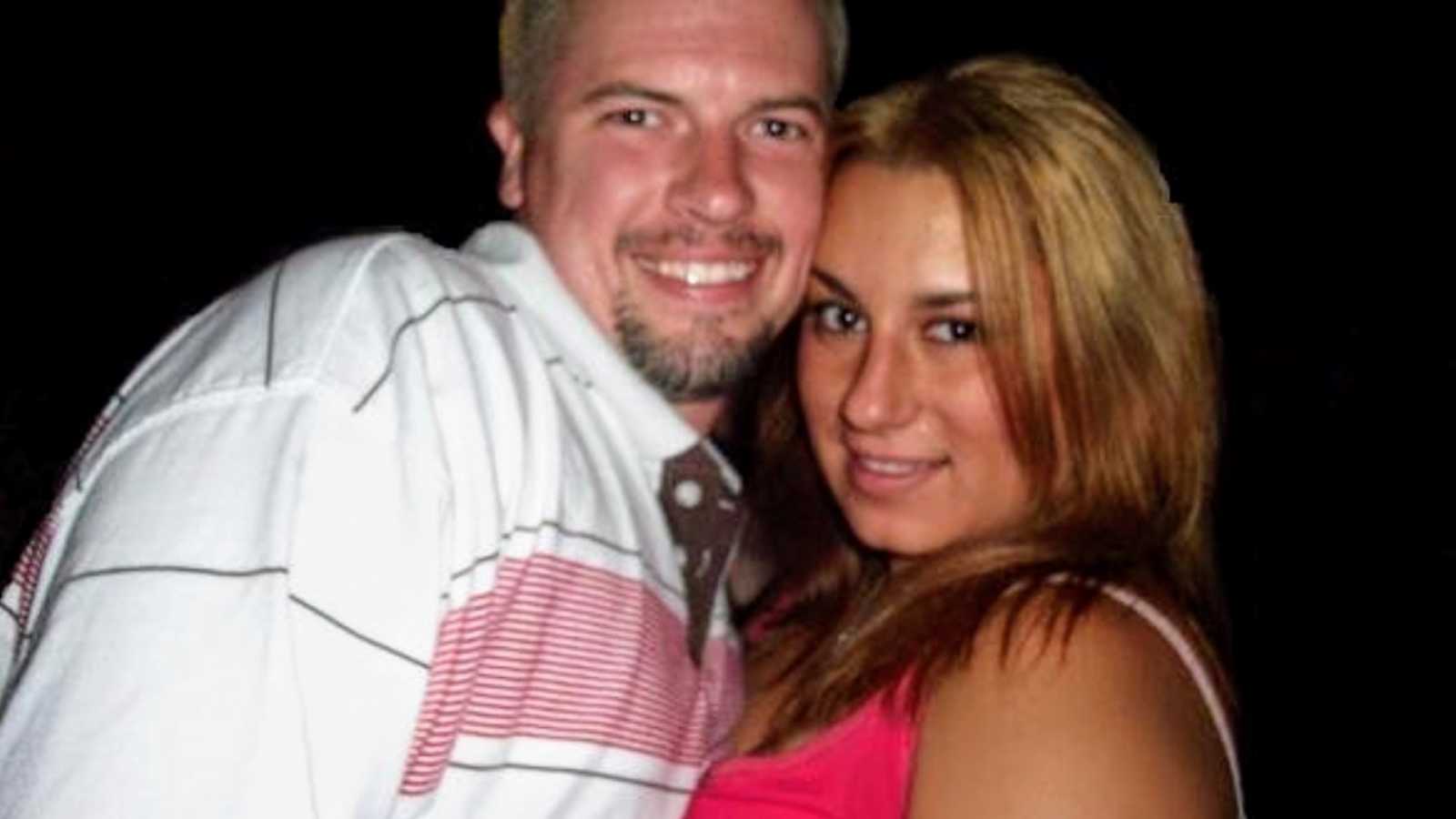 “Like many little girls, I could not wait to have my own baby. I had dolls, strollers, feeding accessories, handmade clothes all for my baby dolls. So, when I met my now husband at 22, baby fever went into over drive, that poor man never stood a chance. I was so incredibly anxious and excited to have a little person that was half him and half me. I would have started trying the first month we were together, if it was only up to me. It was like I KNEW something.

We were dating about two years the first time I figured out I was pregnant. We were on the couch, I was laying down and we were watching some horrid movie that was making me dizzy. I had just finished with Aunt Flo a few days prior, but something was definitely amiss. I sat up and went straight to the bathroom. There was blood. I was so mad that she came back! But some small voice in the back of my mind told me that, that’s not what this is. So, I took a pregnancy test. Two lines. My brain exploded! I ran downstairs to tell him, so excited. He was completely shocked, but happy. He always wanted kids. Then I blurt out ‘but I’m bleeding. I don’t know why’.

I talked to some people I knew that had been through this, and they all reassured me all was well. It had to be. Why wouldn’t it be? Plus, at the time it was spotting more or less.

I went to work the next day, I’m a medical assistant and at the time I was working in a family practice with one of the most amazing doctors I ever had the pleasure of meeting, let alone work for. (He is now our family doctor) The man is brilliant and kind. So of course, I tell him that I’m pregnant and bleeding, and he said, ‘Ok. I can check you… but you’re pale and I think you should go to the ER just in case. I would feel better if you did’ so I did. My coworker brought me.

The doctor I had the displeasure of having was a short woman with black hair, they took blood, I peed in a cup, and eventually she checked me. My HCG numbers were great! She said to me though ‘You’re bleeding a lot, but your cervix is closed so I can’t tell you if you already lost the baby’ and she discharged me. I hadn’t lost the baby yet, I would the next day, at home in my bathroom, sitting on the toilet and I felt a gush and what felt like the tiniest organ ever come out of me.

My baby. I didn’t know what to do. I was home alone, in a complete panic. So, I flushed. And hoped my toilet wouldn’t clog. I hated myself for a while. I mean, I FLUSHED my baby!! And then it happened again.

I called my primary doctor and made an appointment. We did blood work, talked about everything and she concluded that I had Polycystic Ovarian Syndrome (PCOS), she said the first time, may not have been the first miscarriage, but it appears that with my type of PCOS, I can very easily get pregnant, I just couldn’t STAY pregnant and I more than likely never would.

I would have seven more miscarriages. Some of them most people didn’t even know about, I got sick of telling anyone just to start cramping and bleeding and doing that whole song and dance. It was soul crushing.

Plus, in the middle of miscarriage hell, my sister found out she was pregnant. She didn’t really want kids, so I was a bit bitter, but also REALLY excited. My nephew was born, and I was in love. My world revolved around that boy, (it still does) life made more sense with him in it. I babysat him as much as I could, sleepovers? YES PLEASE! As an infant, he would sleep over and I would be over the moon, I would cry when my sister… his mother would come get him. I love that boy.

Then, January two days before my boyfriend’s birthday, something again told me to check. I had not one single symptom. So, imagine my shock when two lines faintly appeared? And I got excited! Because this one felt different, when he came home, I made him sit down and open all of his presents early, he opened the pregnancy test last. Stared at it. Stared at me. And smiled. He was scared, I could see it. But I was so hopeful!

9 months of really violent hyperemisis, some placenta previa, some bed rest and misery the hottest summer I can remember, and our beautiful 8lb 6oz baby girl Arianna was born.

I had some postpartum depression after she was born, but it was entirely manageable, and then when she was just barely 4 months old, I started to get some serious nausea, I was hoping I was just sick… nope. Pregnant. I just had 9 months of pain, exhaustion and so many tears, I’m now post-partum with an infant and I’m going to do this again.

Those 9 months, and the year following are why we only have two children. This pregnancy was awful. I enjoyed none of it, I was terrified of having two babies on completely different schedules, my hormones were a complete wreck and I really didn’t want to have another baby yet. I wasn’t ready. And I felt like the worst person for not wanting to be pregnant and being angry about it… how dare I after all those losses!!! My husband was so excited though.

Well ready or not on my birthday 8lb 12oz Makenna was born, a year of colic, a year of pretty severe post-partum, her having RSV at 3 months old and a 3-day hospital stay…I just couldn’t handle it.

How did I go through all those losses, to not be able to enjoy any part of pregnancy, and then have a baby who in my post-partum mind hated me, and I was a terrible mother, my marriage was falling apart (we got married after Arianna was born!) and I was drowning. How was any of that fair?

But then, 13 months to the day that Makenna started screaming…. she stopped. She just stopped. For the first time there was silence, there didn’t feel like there was a fire to put out, I was able to breathe, and think… I was able to actually get to know Makenna, and Arianna. I could venture out with both of them, I was starting to feel like me.

Of course, Makenna is blameless here, she was a baby… went to doctors numerous times, nothing physically was wrong. She was just VERY attached to me and insecure and would lose her mind if I wasn’t constantly nearly in her face, add that to some serious post-partum and it’s stressful, on everyone, let alone myself.

But when she stopped, when she finally started to feel safe to be away from me so that she could sleep, or I could shower alone… our lives dramatically improved.

She is still ridiculously clingy at 7 years old, but I don’t know how my life would be without her. We are very close, she is my helper and my comedian.

Arianna, whom is 8 now, is easily the sweetest child anyone could meet. She’s silly, smart, and gentle.

When I look at my girls, there are often times that I wonder. Wonder who their siblings would have been, what they would have looked like. How mine and my husband life would be different.

I went through so much heartache and loss to get my rainbows, I mourn still… the losses of not only my babies but also what I went through with both of my pregnancies and first year of Makennas life and subsequently Arianna’s second year of life.

But I wouldn’t change or trade anything. I’m stronger now, more patient, and much more sympathetic to the struggle of new moms. And every day I get to look at two of the most beautiful rainbows, I’ve ever seen.”

‘The first time I flushed was in the bathroom of my old apartment. Just 3 days before, I had been standing on that same linoleum floor staring at two blue lines.’

‘I panicked. I dropped my baby into the water and flushed. As soon as I realized what I had done, I tried to get it back, but it was too late. My baby was gone.’

‘I was 19 and diligently on birth control. My heart raced seeing those two lines. Shocked was an understatement.’: Young mom births 3 rainbow babies after multiple miscarriages, ‘Don’t give up, friend’

This story was submitted to Love What Matters by Carlyn Prato-Emens of New Jersey. Do you have a similar experience? We’d love to hear your journey. Submit your story here, and subscribe to our best love stories here.