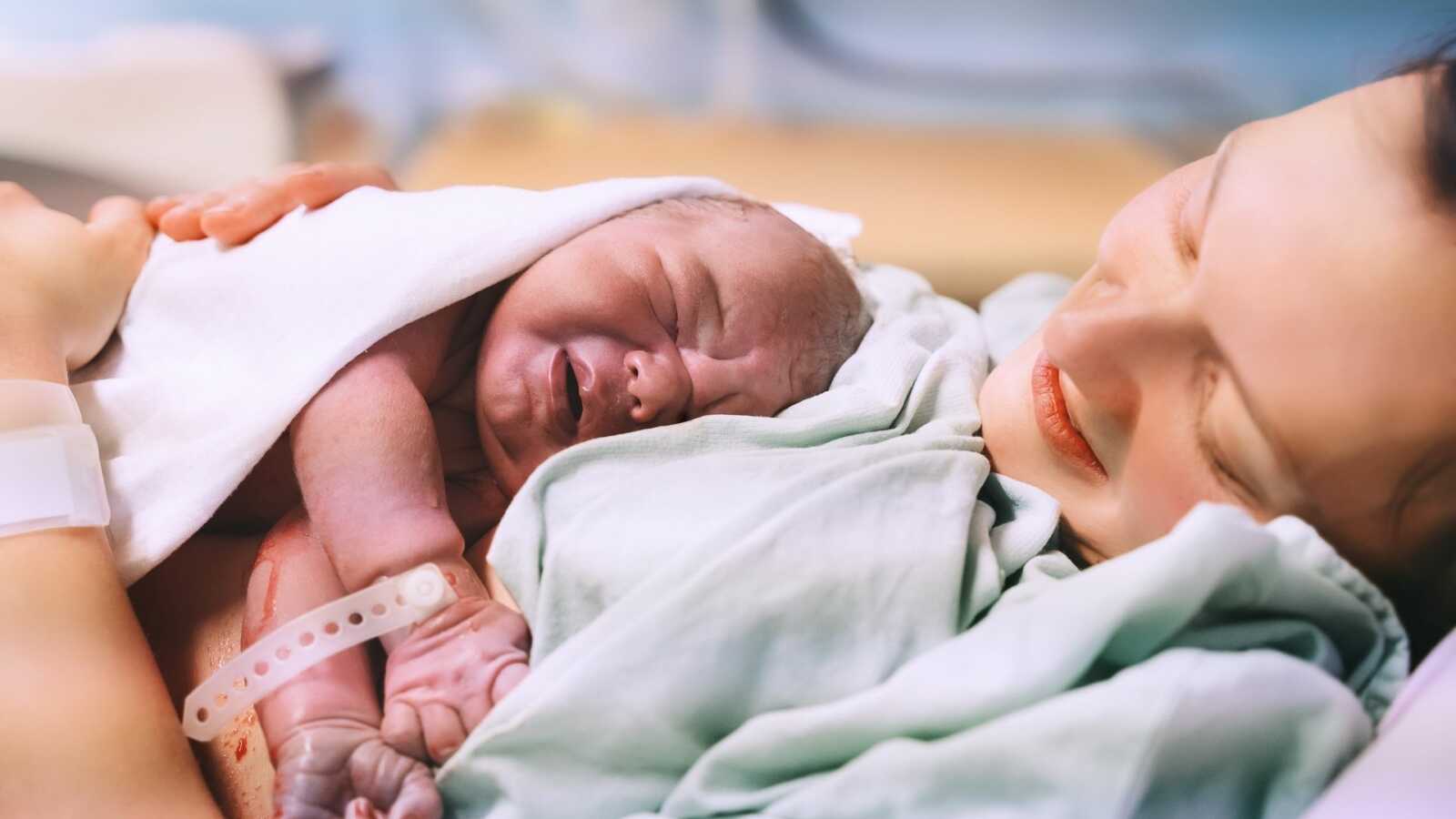 “There I was. An excited, twenty-something-year-old first-time mother-to-be with a perfectly thought out birth plan, a doctor I loved, and an estimated seven-pound baby that was supposed to be a breeze to deliver.

Flash forward nine months, and exactly none of my plans went how they were supposed to.

Here’s the fast version of how my labor actually went…

I had prodromal labor for 6 weeks before finally going into labor on my due date. I arrived at the hospital with the most intense back labor I never knew existed, and spent the first part of my supposed to be dark, quiet, and peaceful labor puking with over ten excited family members staring at me. I was eventually scared into agreeing to an epidural.

To make matters worse, my IV fluids were not going into my vein and were instead filling the tissue in my arm, causing it to swell up and triple in size. IV number two was a success and from there, I rested and waited for the epidural to kick in.

Several hours later, a midwife I had never met came in to check on me and asked if I was ready to push. ‘Um, excuse me? Am I ready? Is she ready? This is your area of specialty, lady. You tell me.’

I then pushed for close to four hours which caused my baby insane amounts of stress, leading her to poop during delivery, and my room was soon full of NICU nurses.

After hours of exhausting and seemingly never-ending pushing, a bunch of weird positions, and a lot of tearing, I was finally able to deliver my baby. Definitely not the birth I had been picturing for the past nine months.

As if the shock and trauma of the last several hours were not enough, we were now met with a new shock — our baby was actually TEN POUNDS and her eyes were so light blue they had almost no pigment in them.

She was then quickly whisked away from me and already being poked and prodded to make sure she wasn’t blind or diabetic.

All the while, I was just laying there. Done with my job but feeling so helpless. NONE of that was how it was supposed to go, but there’s no going back. No redo. No trying better next time. My labor was over, my baby was here, and I had never felt so alone in my life.

Finally, my mother-in-law at the time convinced the nurses her size and eye color were the direct result of her father’s genes, and I was able to hold my baby and soak in all her 10-pound glory.

The entire experience was not only the opposite of what I planned, but also changed the way I saw labor and directly affected the decisions I made with my next two labors.

Hindsight really is 20/20 and if I could go back, here are five things I would have changed about my first labor:

I would have relied less on doctors and trusted in my body and baby more.

The stress of early labor definitely made me more impatient, but I have no doubt if I would have just embraced the fact my body was doing its own work, I would not have felt the need to rely so heavily on what the doctors were saying. It sucked the joy out of those last several weeks and by the time I was REALLY in labor, I was already so discouraged.

I wouldn’t have allowed visitors.

Although being surrounded by family was definitely comforting at times, I also spent a lot of the time worrying about them, what they thought I should do, or what they thought about the choices I was making. With that being said, it was probably a blessing in disguise having them in the room during delivery, as they advocated for me when I needed them most.

I would’ve done more research on alternatives to the epidural.

Don’t get me wrong, the relief it brought me was one of the only positives of my entire labor experience. What I didn’t like was the feeling of being out of control and just doing what the doctor said instead of being in tune with my body. The recovery was also MUCH harder than my second labor, but that’s a whole other story in itself.

I would have waited for the urge to push and let my body do that work.

The fact I began pushing so early still blows my mind and I wish I had known my body would have literally done the work for me. With an epidural and feeling no pain, there was absolutely no reason to be in a hurry. I truly believe starting to push so early caused me and the baby so much undue stress. Compare that with my second natural labor, where I had to physically hold my baby in until the doctor was ready, and I will never force myself to push ever again.

I would’ve insisted my baby stayed with me right after birth.

All of the tests they ran could have happened with her on my chest and all the weighing and measuring definitely could have waited. Those first moments after labor are a whirlwind and I really wish I would have been able to soak her in at the moment she entered this world.

My Advice To You

I cannot stress enough how important it is to trust your body to do what it was made to do. Epidural or not, your body is capable of so much and unless things go wrong, the doctor should basically just be there to catch your baby. Hell, even your husband could do that if he is brave enough.

Research, research, research and then be flexible to the idea that things might not go as planned. I really wish I would have had a better idea about what to expect, as well as the options I had during labor. I hated feeling so out of control of the experience and 100% blamed that on the fact I didn’t really know what I was in for. I thought I would get the epidural, feel no pain, and the rest would be easy. WRONG.

Most importantly, make sure your birth partner knows your expectations and hopes for the birth experience so they can help advocate for you in the delivery room. It is so hard to remain calm when things get tough and the importance of a good birth partner can make a world of difference, whether it is your spouse or a professional doula.

Labor Should Not Be Scary

I realize there are far worse labor stories out there and mine was mild in comparison. What I wish is that more of us were armed with knowledge and empowerment versus being offered so many medical interventions and options.

All women deserve to have a positive birthing experience, no matter what methods they choose. I hope sharing my experience, as well as the things I would (and have) done differently, help even one woman have a better labor, as the way it is intended to be.”

This story was submitted to Love What Matters  by Emmy Bennett from Oakdale, California. You can follow her journey on  Instagram and her website. Submit your own story here, and be sure to subscribe to our free email newsletter for our best stories, and YouTube for our best videos.

Staying Together ‘For The Kids’ Isn’t Always A Bad Thing

‘Sometimes babies cry. As long as they’re changed and fed, they don’t always need to be figured out.’: Mom shares newborn parenting advice

How To Establish A Consistent Bedtime Routine With Your Baby

Do you know someone who could benefit from reading this? SHARE this story on Facebook with family and friends 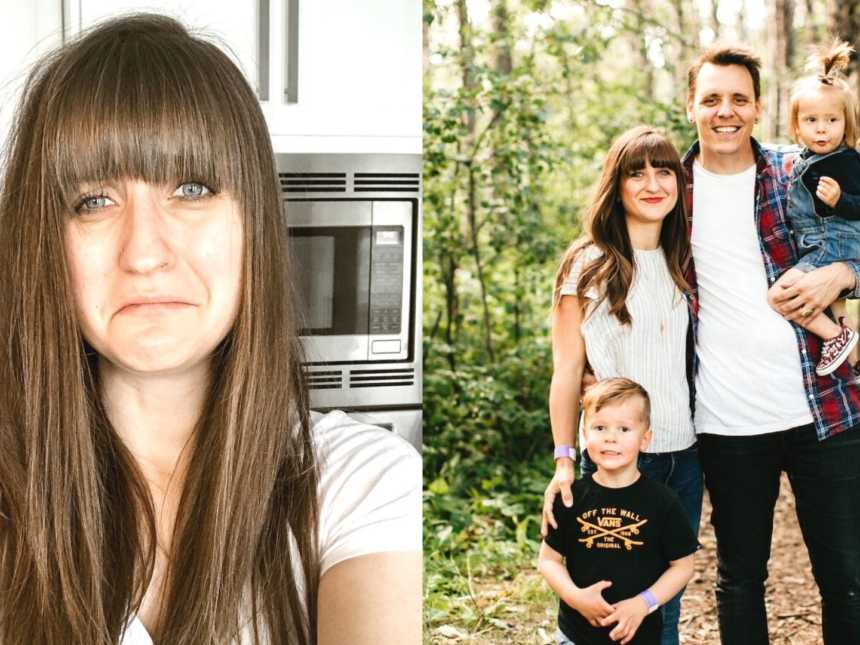 ‘This is the winter of despair.’ It felt like the nail in the coffin. But I was reminded of something. This is an opportunity to make new traditions.’: Mom says ‘This year, I’ll make the magic for my family’

“It doesn’t have to be extravagant or overwhelming. Christmas morning can be a free-for-all, or we can make it last all day. And next year, because of the sacrifices we’ve all made to keep each other safe, we can be together.”