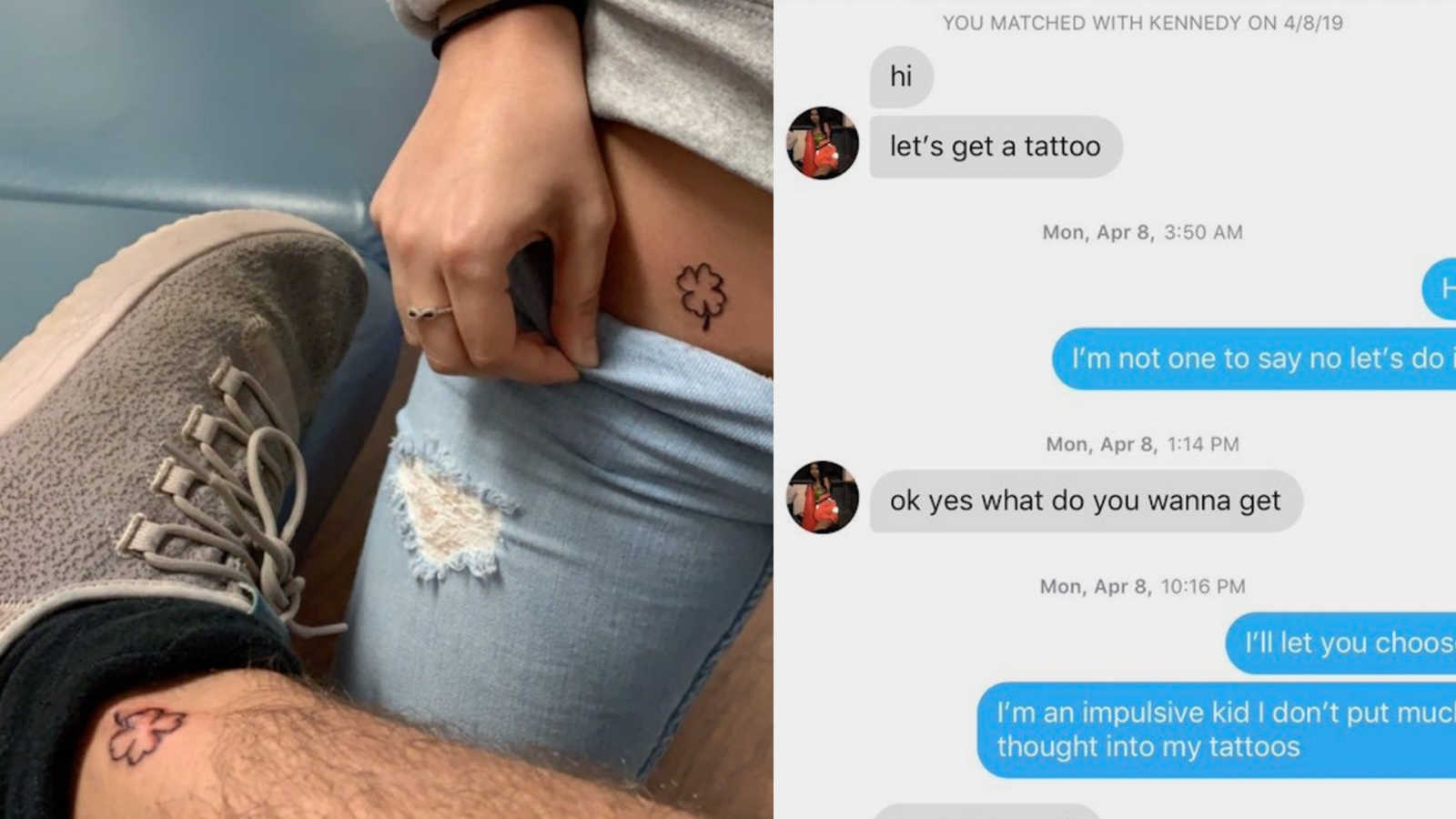 “I’m a very impulsive person. I love to go out and live my life a little bit on the edge, so I have stories when I’m older and a life full of memories. About a month ago, I thought it would be funny to change my tinder bio to state ‘Just looking for a random tinder match to get matching tattoos with me.’ Little did I know that it would lead to me having one of the most impulsive stories I’ve ever had.

Shortly after I posted the new Tinder bio, I matched with a girl named Kennedy. She likes to go by KK though, it’s cute. She sent me a message asking if I was actually down to get a tattoo, which of course I said yes!

I’d gotten a few Tinder matches prior asking, but none of them had the enthusiasm and actual intent to get one like she did. We only had a few messages back and forth about the tattoos, originating with her asking if we wanted to get matching taco tattoos. In the end we decided to go with a four-leaf clover which I thought was a great idea since I’ve generally always been a lucky kid and it would go perfectly with my lifestyle.

About a week went by and I decided it was time to actually be impulsive. I was slightly hesitant, because she lived two hours away, so it was a risk, but it was a risk I was willing to take. When I got to her town, I literally just picked her up and we went straight to the tattoo shop. We hit it off right away because we both had other impulsive tattoos including ones on the inside of our lips which is not super common. Within twenty minutes of meeting, we were at the appointment getting a matching tattoo.

She ended up being a really funny and genuine girl. Of course, it helps that she was also gorgeous! We hung out for a while after the tattoo and it’s crazy to think that I ended up forming a strong relationship with a complete stranger.

My tinder bio was “Just trying to find a tinder match to get matching tats with” and today i was feeling impulsive and actually went and did it 🔥 pic.twitter.com/jel6eIFPrW

People tried to convince me that getting the matching tattoo was a bad idea, but I think it’s a wild story and I won’t ever regret getting it done or meeting KK. As someone from twitter said, ‘We’re now connected forever’ and that’s amazing.

So when’s the wedding???

And I know everyone has been asking, so I’ll be the one to say there is a second date in the works and who knows it might even be more spontaneous than the first!”

This story was submitted to Love What Matters by Christopher DeSanti, 22, of 22 from Erie, Pennsylvania. Follow him on Twitter here. Submit your own story here, and be sure to subscribe to our free email newsletter for our best stories.