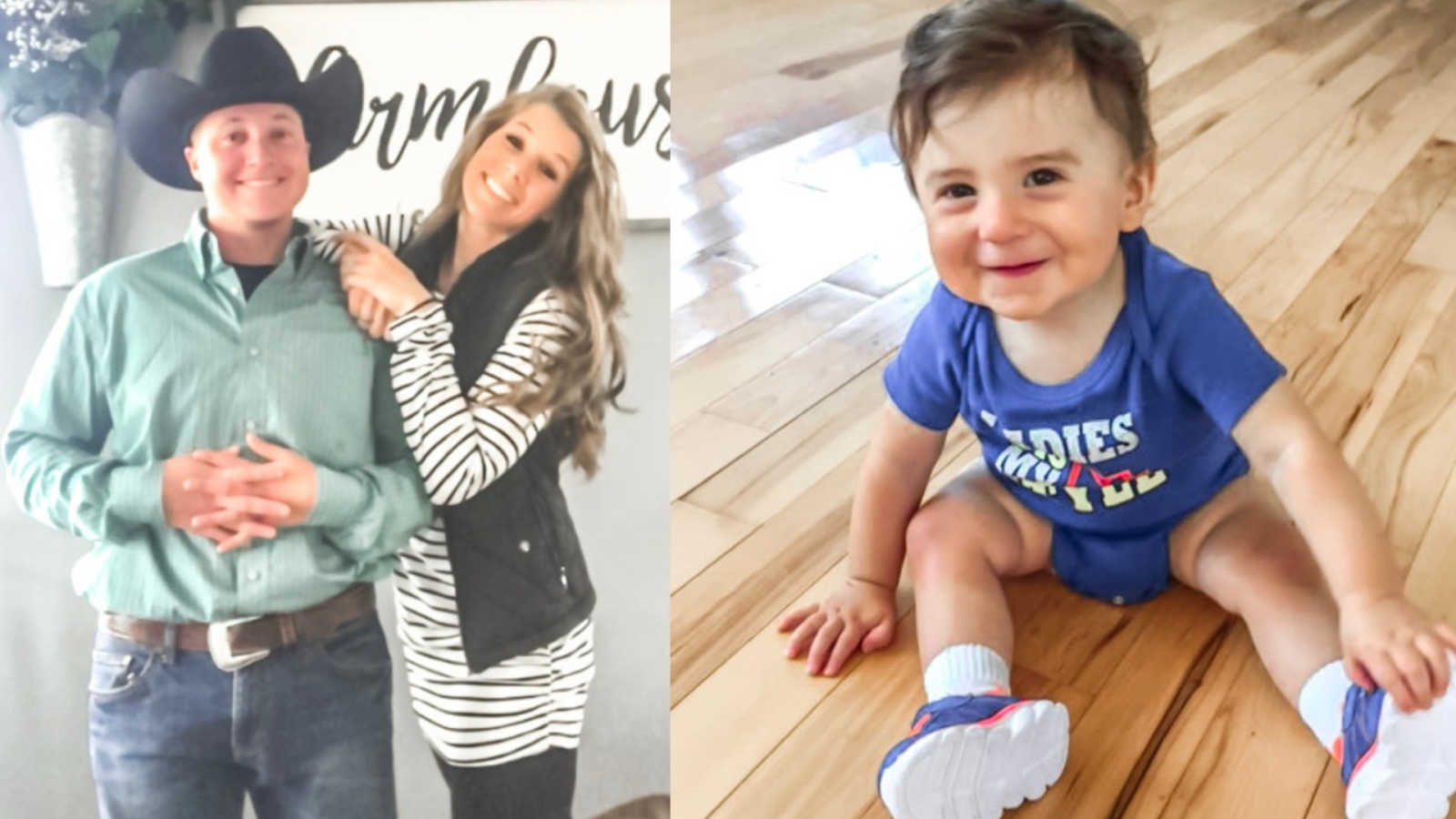 “Kaleb and I met through a mutual friend when we were 18. We stayed in touch during college and started dating shortly after college. After dating for a few years, we got married in May of 2015. We are a fun, loving, adventurous, hard working couple. We have a strong sense of humor, are fun filled, silly and full of love and respect for one another. We have a home in the country with plenty of room to run and play. We love animals and have a little hobby farm on our property. We both knew we wanted to have children. I wanted them sooner rather than later and knowing we couldn’t have biological children we knew we wanted to adopt. We have several adoptive family members and knew how long the adoption process could take. We were already licensed foster parents in Missouri but really wanted to adopt an infant.

After a lot of research, we decided we didn’t want to go through an agency. The news articles about unethical agencies and the high cost to use one sent us running in the other direction. We set out to do it on our own. We ‘advertised’ ourselves online through social media. We made a Facebook page and an Instagram page with pictures of our everyday lives so expectant mothers could get an idea of what we were like. We asked our friends and family to help get the word out by sharing our Facebook post. Social media can be a powerful tool. We were contacted by several women – this was the hard part of self matching that no one can prepare you for. Some of those women chose to parent, some chose abortion and some turned out to be a scam. The highs and lows were so hard. I didn’t want to share them with our family because I thought I was protecting their feelings and wanted to be able to ‘surprise’ them like everyone else gets to. One of the hardest parts for me was seeing pregnancy announcements and knowing I would never have that, I would never have a gender reveal and I would never be able to surprise my family with an announcement. That left Kaleb and I (mostly me) crying and talking through it each time something would fall through. It was hard but deep down we knew everything happens for a reason and those women were doing what they thought was best for them and their baby. I cannot fault them for that but it also didn’t take away our pain.

Sunday, August 31, 2016 I got a Facebook message from a woman who had seen our post. She explained a little bit about her situation and asked us if we wanted to adopt her baby given all the information she had just told us. She was due in 3 days with a baby boy and only lived 2 hours from us! Of course we said yes. The next day I went and spoke with our attorney. Our attorney told us we shouldn’t get our hopes up. That it doesn’t happen like this and it would likely not turn out in our favor. Talk about a reality check and a punch to the stomach.

We agreed to meet with the expectant mother the next day for dinner. On Tuesday we left work early and drove the 2 hours to meet with the expectant mother. Kaleb and I talked about the likelihood of getting stood up and the idea that maybe it was a scam but we still had high hopes. We got there and she was already there waiting for us. We ordered our food and got to know each other. I couldn’t eat, my stomach was in knots. She was so strong and brave and I loved her instantly. She was quiet and shy and making the best decision for her unborn child. She didn’t have a big support system around her and I wanted to hug her the entire time – no worries I didn’t make it awkward. She told us she was 99.9% sure of adoption but didn’t want to say 100% just in case. We respected her for being so open and honest.

When we left we hugged and she told us we would hear from her after her doctor’s appointment the next day. I didn’t know if we would ever hear from her again but she seemed trustworthy.

The next day she texted me that baby boy was doing well and she was scheduled to be induced the following Thursday. That little baby boy had other plans though and we got the call on Wednesday, September 7, 2016 that she was in labor and wanted us at the hospital. We left work and headed 2 hours to the hospital. 45 minutes after we arrived at the hospital we watched as Carter was born. It was amazing. We cried. I was the first to hold him and kiss his squishy face and wrinkly toes. He was so perfect.

As we waited for Carter to be discharged from the hospital I couldn’t help but think about Carter’s first mom, who was discharged before us. She was so brave and unselfish in so many ways. It would have been easier for her to abort or try to parent alone, but she thought so much of him and decided to seek out a couple she believed would care for and love him more than she could ever imagine. It was amazing that two complete strangers could have so much trust in each other. We all knew right away we were on the same page and all wanted the same thing. She trusted we would do what we said and raise Carter, care for him, provide for him and love him. At the same time we had complete trust in her. She always did what she said she was going to do even when I know it was hard on her. She holds a special place in our hearts and I know she will hold a special place in Carter’s heart when he is able to understand.

As we took Carter home and adjusted to becoming new parents we stayed in touch with Carter’s first mom. We have an open adoption and plan to get together with her a couple times a year. He enjoys getting to see his first mom and her sons. This year we went and fed the goats at a little farm near her.

Everyone loved it and it’s always good to get together and catch up. We know we are so blessed with the addition of Carter and have experienced so much love and joy with him in our lives. We realized we still have more room in our house and certainly in our hearts to give to another child – so we set out to adopt again so Carter would have a sibling to grow up with.

We started with another post on Facebook. The outpouring of love and the support we had was overwhelming. Carter’s first mom was so excited and even shared our post with a few mom groups she was involved with. Once again we have had several ups and downs. We have had a couple women reach out to us. Some of those women chose to parent, some chose abortion and another woman lied to us about her situation. We are unsure as to why and we will likely never know. We know one day we will get the opportunity to adopt again and Carter will have a sibling to grow up with but until then we will love, enjoy and show him all that life has to offer.

Family isn’t always made by blood. It comes in many shapes and sizes. Love wins and is all that matters, always. We are currently a family of 3 with hopes to be a family of 4 soon. It is not always easy. Sometimes it’s downright hard. But it’s our story and we wouldn’t trade it for the world.”

This story was submitted to Love What Matters by Brooke Bruce. Follow her journey here. Submit your story here. For our best stories, subscribe to our free email newsletter.